Following initial success in its nine soft-launch markets, Clash Royale made its eagerly anticipated global release in the beginning of March. Clash Royale combines components of Clash of Clans, pulling in its popular characters and settings, along with elements of real-time multiplayer online battle arenas (MOBAs) and collectible card games (CCGs).

The global release quickly accelerated downloads, catapulting Supercell into the #1 spot worldwide across both iOS and Google Play combined for revenue and downloads. While Supercell is a familiar worldwide top-grossing publisher, the company has not hit #1 by monthly downloads since the first App Annie Games Index in February 2013. Doubly impressive is Clash of Clans’ simultaneous top-10 ranking by both downloads and revenue, indicating that Clash of Clans’ player base hasn’t simply transferred to Clash Royale. 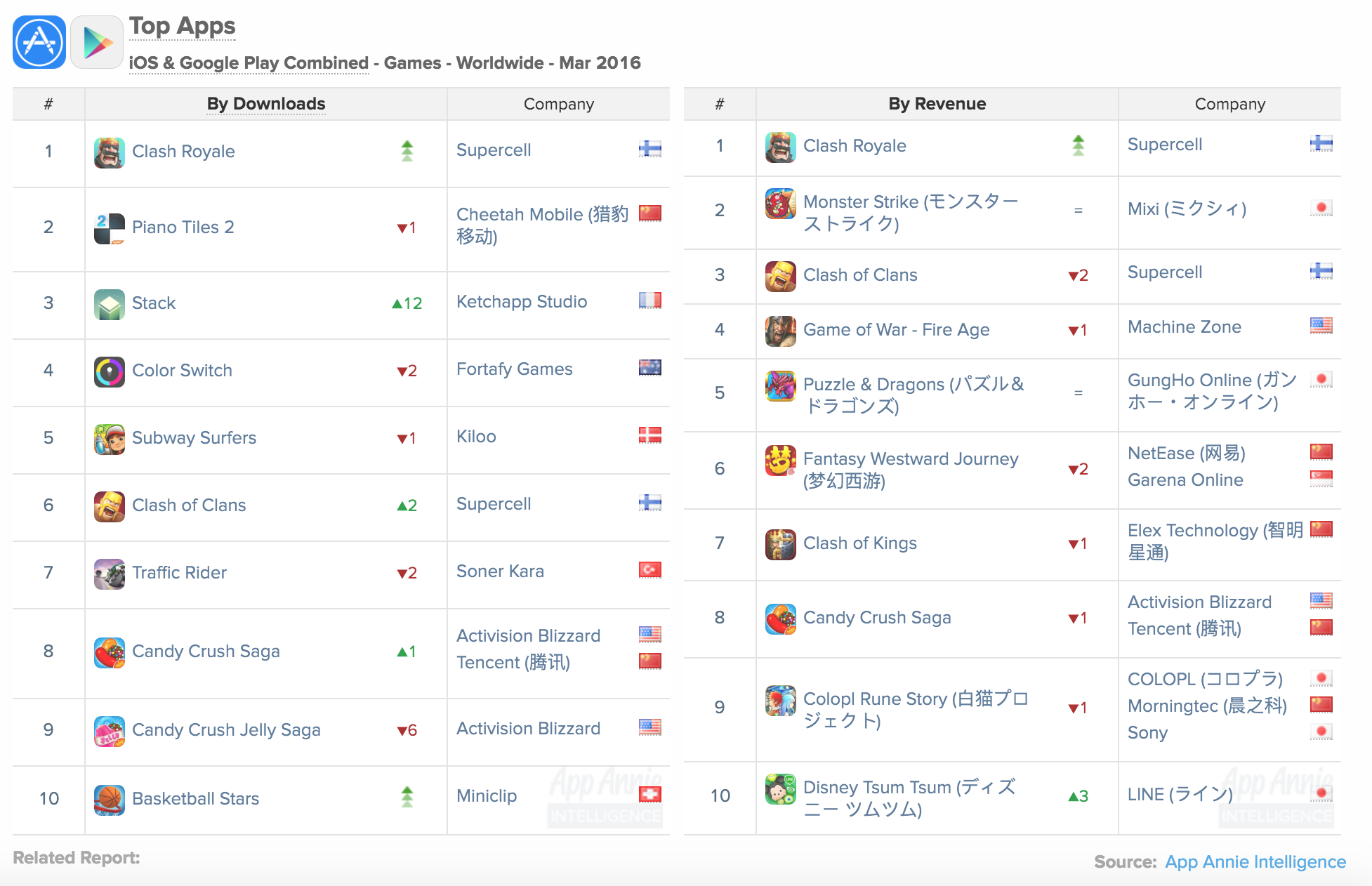 Supercell is used to achieving quick success with its game portfolio, with Boom Beach’s rapid success as a prime example; however, Clash Royale took this achievement to a new level. On the first day of its wide release, Clash Royale hit #1 in Games downloads for 60 countries on iOS. To date, the game reached #1 in Games downloads for over 135 countries and #1 in revenue for over 110 countries.

As we previously noted, Clash of Clans leaned on television advertising — including a Super Bowl spot — to drive awareness. And while Supercell has not yet done the same for Clash Royale, it will be interesting to see an advertisement’s effects on this already immensely popular mid-core game. 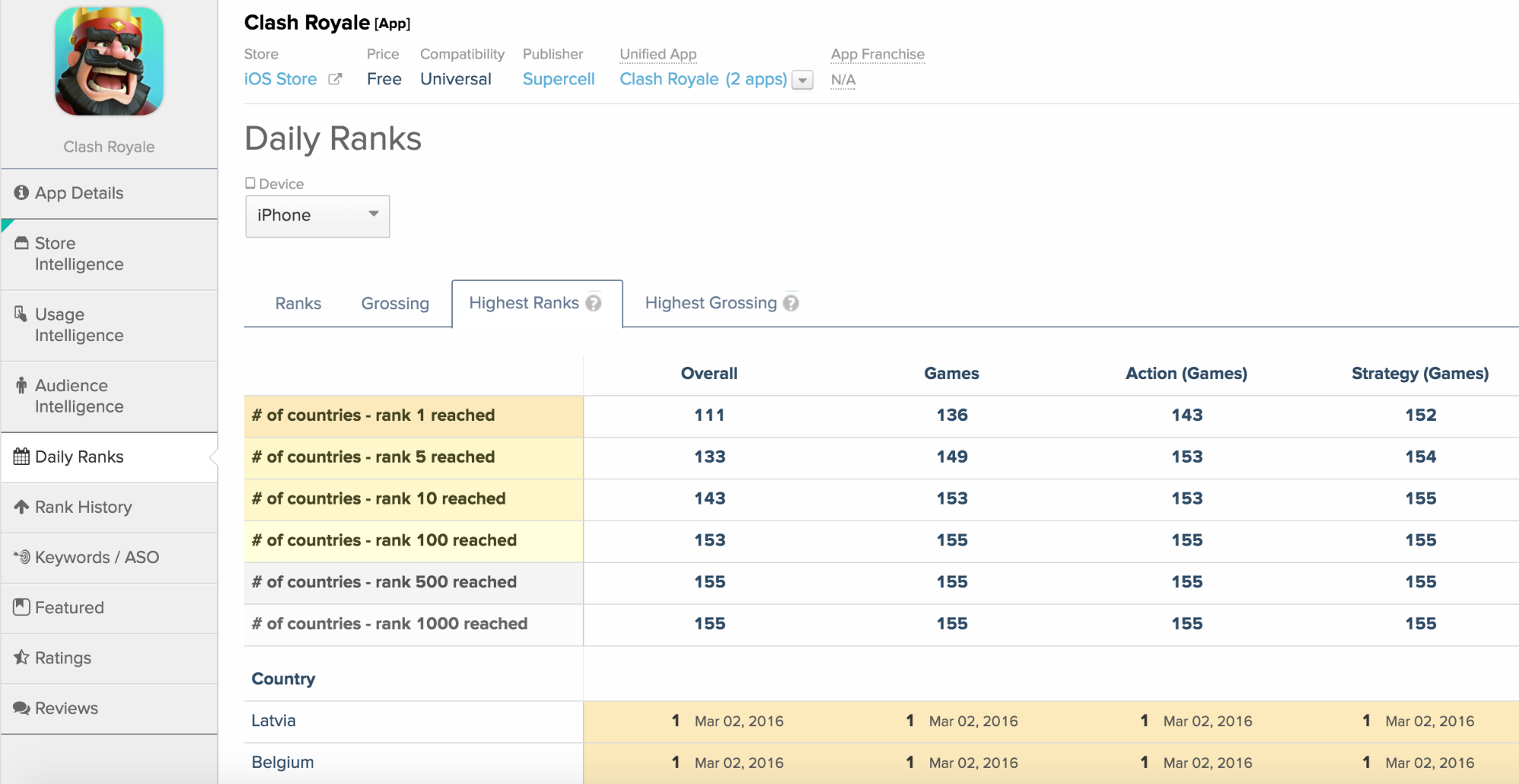 To date, Clash Royale hit #1 in Games downloads in over 135 countries.

Worldwide popularity can be tough to obtain — specifically succeeding in both Western and Eastern markets. Many developers struggle to tap into regions with different languages and cultural preferences. However, Supercell has been able to tap into both. Its hit titles Clash of Clans and Clash Royale have high volumes of monthly active users (MAU) in both the United States and China. Other publishers can look to Supercell for an example of preventing churn and maintaining gamer interest in diverse regions. Additionally, leveraging an existing game’s intellectual property and injecting new gameplay can keep users within the publisher’s library of games.

Supercell is the only publisher with a top-5 presence in both the US and China by iPhone MAU.

Basketball Stars is a Slam Dunk for Miniclip 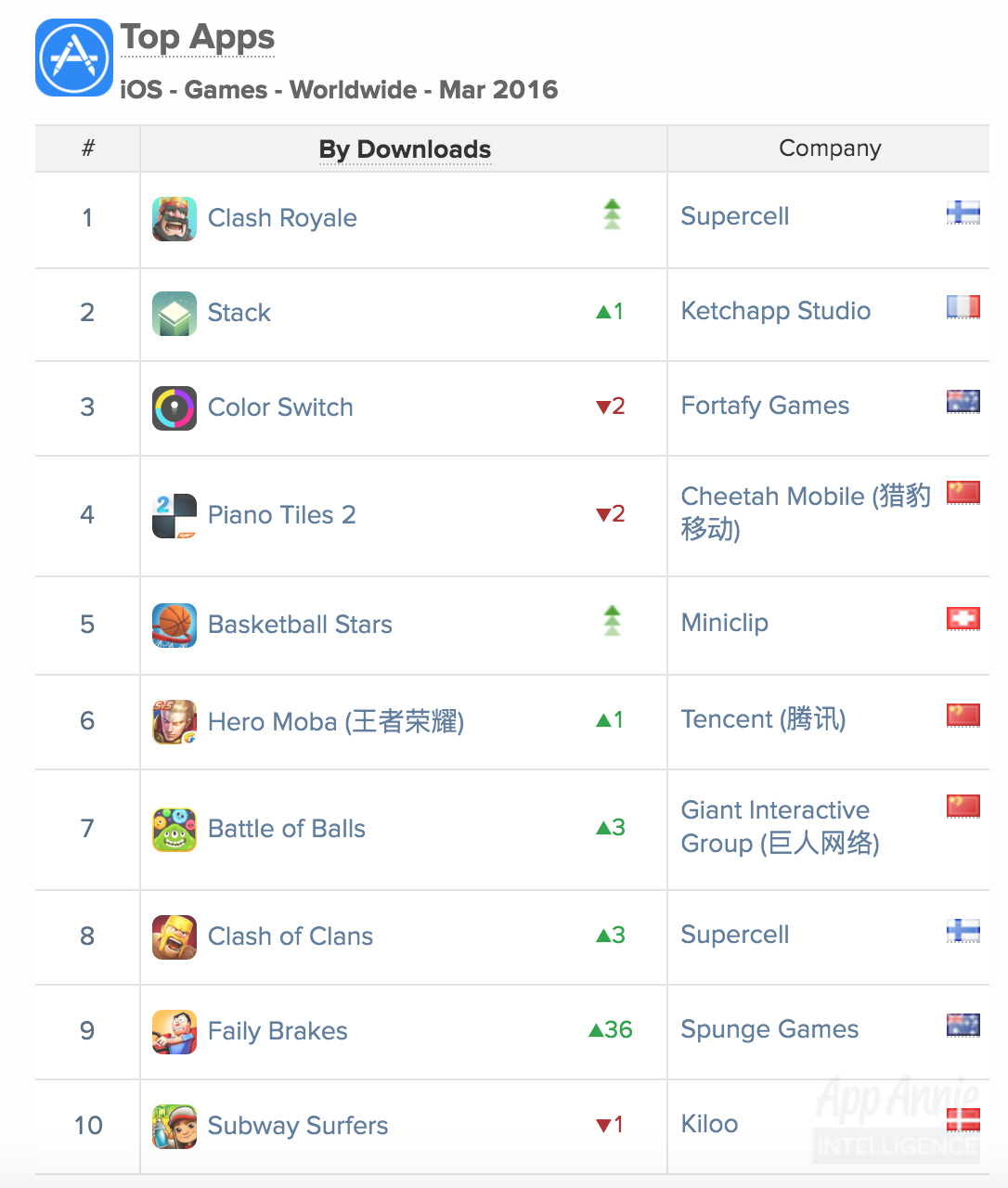 Miniclip's Basketball Stars shot up in popularity with its timely mid-March release, synced with the first game of March Madness, an annual college basketball sporting tournament in the US. The multiplayer game released by the publisher of smash-hit Agar.io allows online one-on-one real-time play. 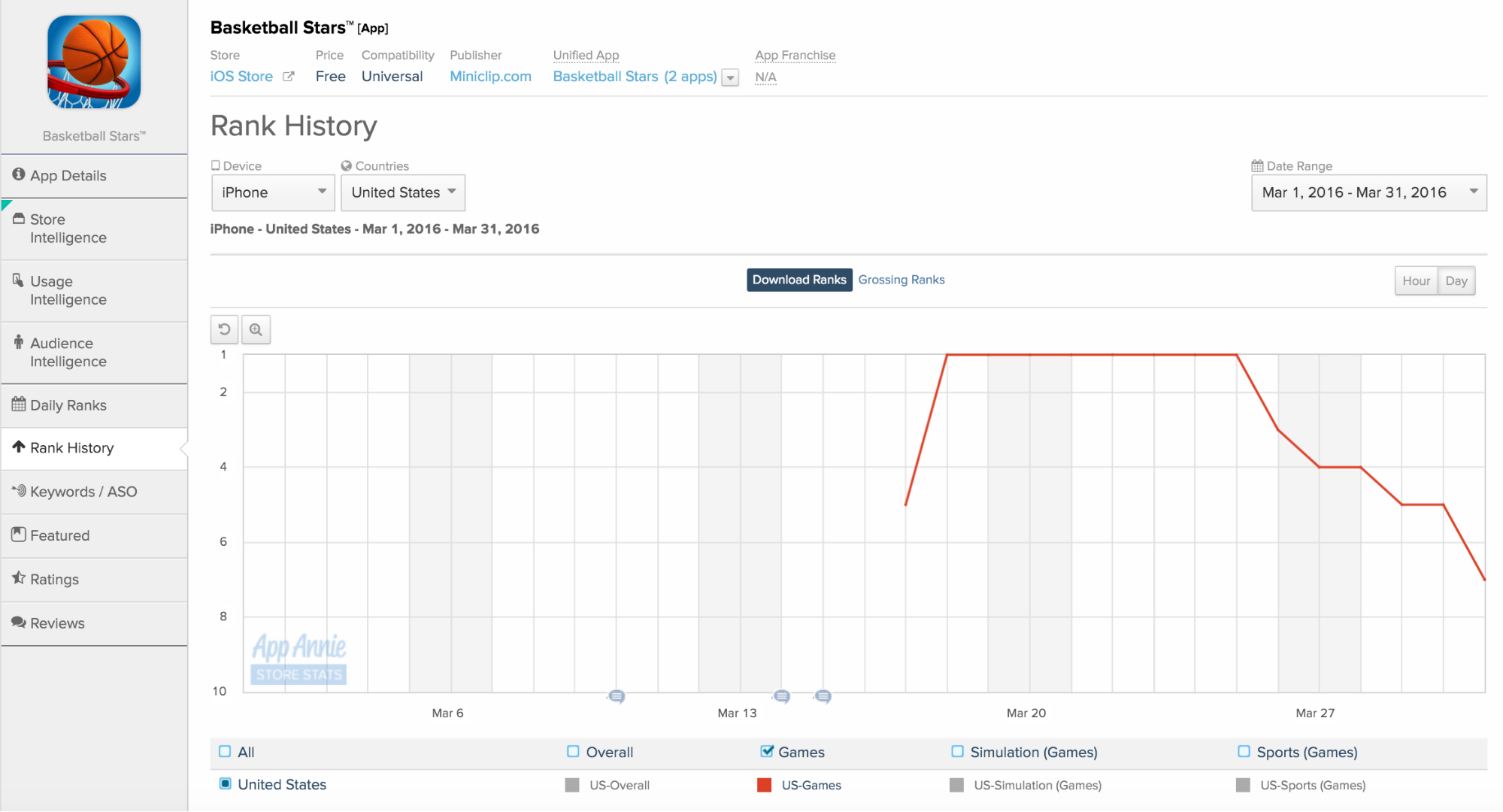 Coinciding with March Madness, Basketball Stars maintained a top-10 ranking in the US by Games downloads on iPhone throughout March.

Miniclip has historically found success when launching an app in conjunction with a major sporting event. For example, in June 2014, the publisher released Soccer Stars to coincide with the World Cup and landed a top-10 spot on iOS’s worldwide Games rankings by downloads. The company also has a game called Hockey Stars, and while it has only soft-launched in a few European countries, it might see a download boost around the Stanley Cup playoffs in June.

Basketball Stars was not alone in reaping the benefits of March Madness’s popularity - which also had a significant impact on the March 2016 Apps Index. CBS Sports, which allowed users to stream March Madness games, also saw an increase in its download rank, briefly landing within the top 10 overall apps in the US. Not surprisingly, NCAA March Madness showed a similar pattern to CBS Sports and Basketball Stars. This is typically seen with sports apps that have specific triggers for a massive rise in popularity tied to key sporting events, such as the start of baseball season.

This leads us to a key takeaway for publishers: Associating your app with relevant cultural events is recommended for boosting awareness and increasing downloads. While it is not necessarily critical to release a game in parallel to a related cultural event, this may be the best time to target investments in advertising and partnerships. This has been done with games tied to movie releases, such as Star Wars: The Force Awakens and Despicable Me, and has translated well for sporting events. Moving forward, we recommend watching how publishers time their game releases with other popular events.

Stack Towers Above the Competition 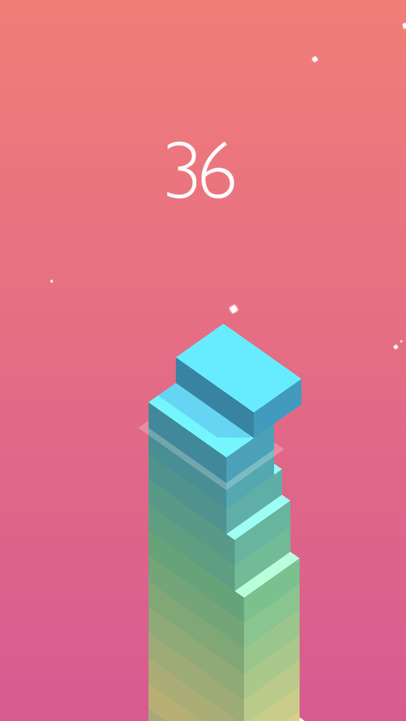 Stack, another successful Ketchapp game, grabbed the #3 spot on the iOS App Store and Google Play worldwide combined download rankings in March following a successful launch in mid-February. Gameplay is addictively simple and reminiscent of other Ketchapp games and captured worldwide appreciation with the tap of a finger, block by block. While the game is enjoyed across age groups, it tends to skew toward the younger age group of 13–24 in the US on iPhone, more so than the majority of top 10 Games which tend to skew toward ages 25–44.

Ketchapp is able to stay in the top ranks by using a strategy that reflects mobile games' short lifecycles. By making simple, addictive games with a frequent release schedule, they're able to transition players within its family of titles rather than losing them to competitors. This is done through a cross-app promotion strategy model, where advertising to users within existing games promotes conversion to new games. Ketchapp’s first popular game to achieve top ranks by downloads was 2048 in March 2014, and since then, 58 out of their 79 iOS games and 59 out of their 67 Google Play games have reached a top 10 download ranking in the US.

"We’re very pleased with the success of Stack this year, and humbly recognize its success as a reflection of its beauty. Expect many more beautiful games from us this year."

App Annie will continue to monitor Ketchapp’s releases to see if they can stack up to its other top games. 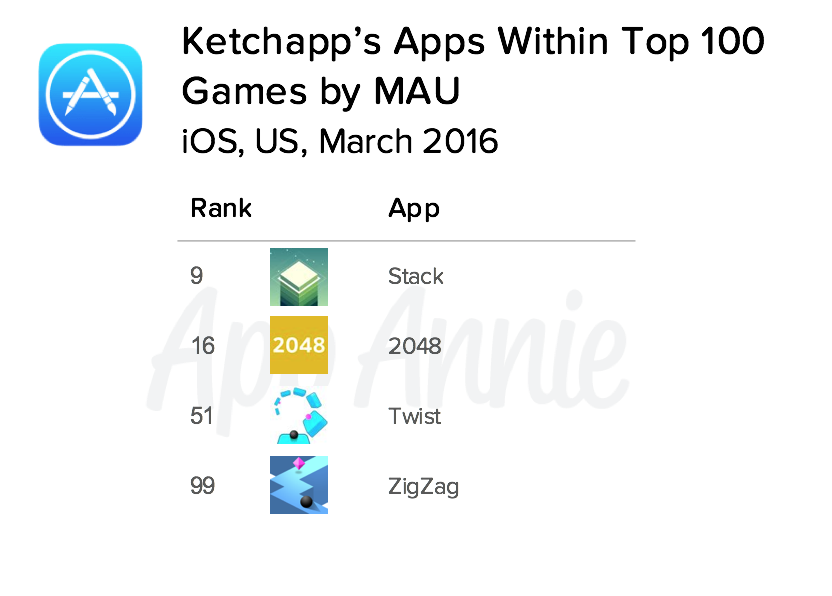 Although mobile games tend to have shorter lifecycles, Ketchapp managed to get 4 apps a spot on the US’s iOS Top 100 Games by MAU.

For the complete list of March’s top apps and app publishers around the world, click the chart above.