App Annie Index for Games May 2014

The App Annie Index for Games offers the hottest mobile game properties for both the iOS App Store and Google Play. To find out what’s hot in other app categories, please check out the App Annie & Internet Retailer Index and App Annie’s May 2014 Index for Apps and Index for General & Business News. 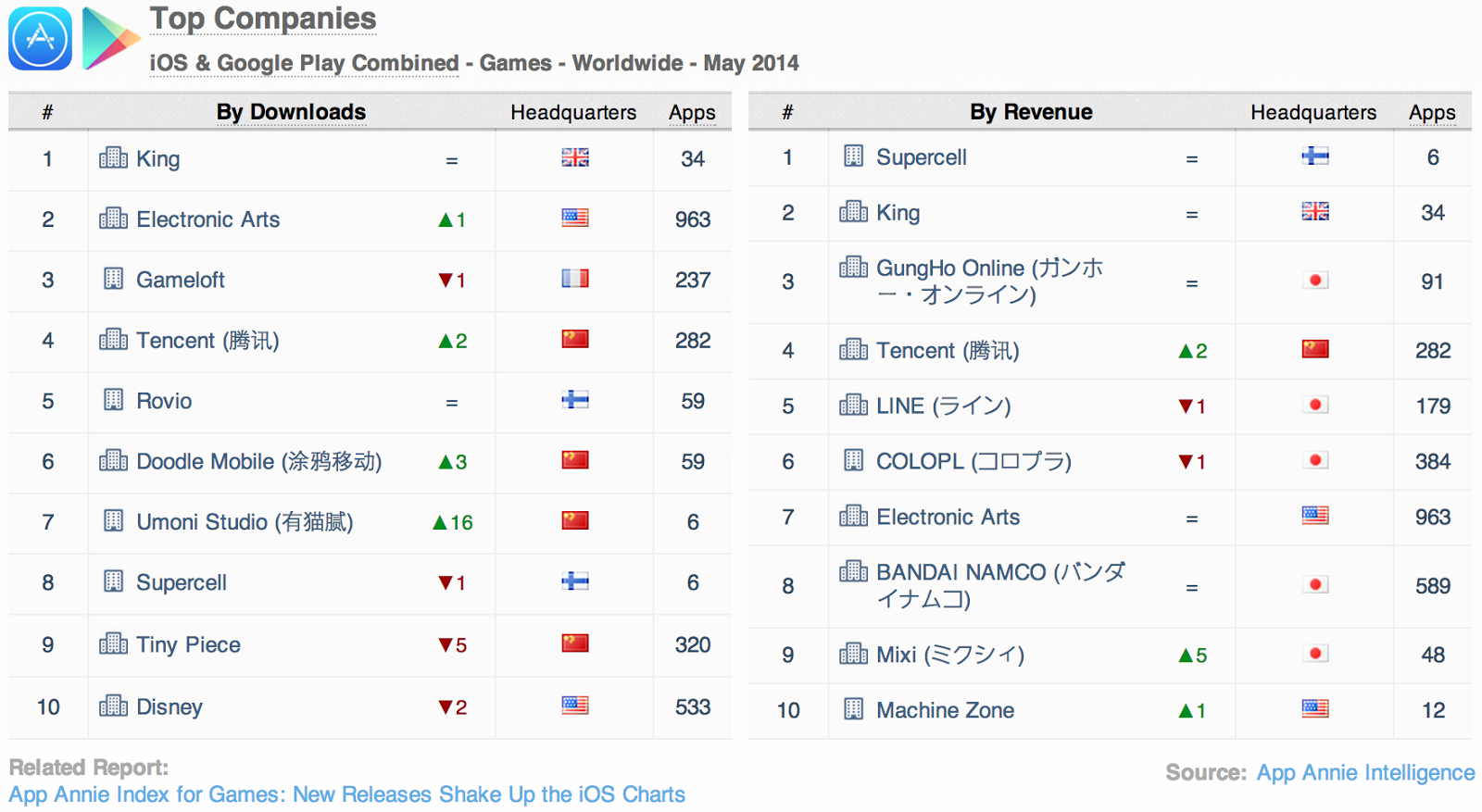 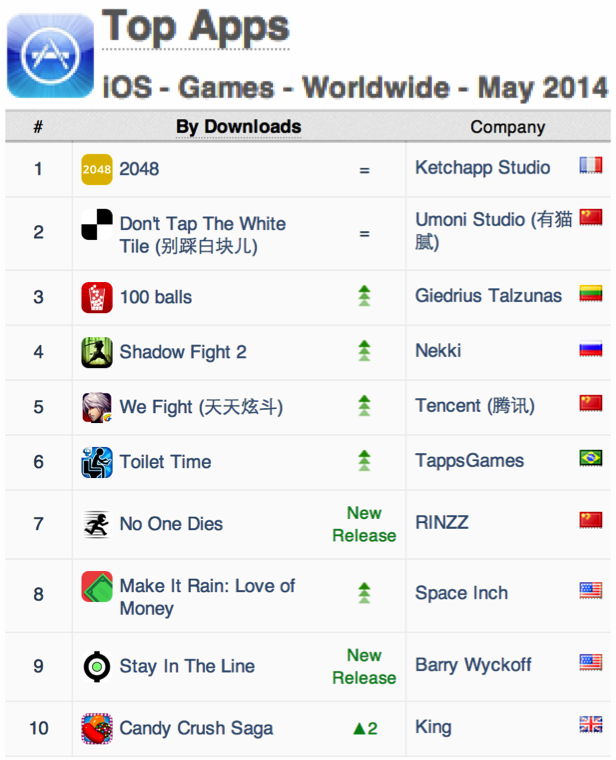 Seven new or recently released games entered the Top 10 iOS games by monthly downloads in May. 2048 and Don’t Tap the White Tile were the only two apps that maintained their positions in the Top 10 from April, while Candy Crush Saga made a return to the Top 10.

Shadow Fight 2 is Nekki’s sequel to the popular Facebook martial arts role-playing game (RPG), now with fighting mechanics optimized for touchscreens. The app’s surge in downloads coincided with being featured on the iOS App Store home page in early May. Nekki shared with App Annie how word of mouth powered the app’s success:

“Shadow Fight started out as a game for social networks, but the project had so many innovative and interesting factors -- ancient Asian warriors, keyboard controls, creative gameplay and more -- that we gained millions of players without any marketing efforts.

Even though mobile is a highly competitive space, Shadow Fight 2’s fresh adaptation on Android and iOS was our company’s most successful and rapidly growing title ever. To this day, we maintain that unique gameplay and simple mechanics trump huge marketing budgets, and that surprising players can lead to word-of-mouth sharing among their friends that exceeds any marketing campaign. This powerful virality helped our game reach high rankings. Right now, Shadow Fight 2 gathered more than 20 million downloads worldwide, and this is only the beginning of our journey!” - Sergei Babaev, Business Development Executive, Nekki 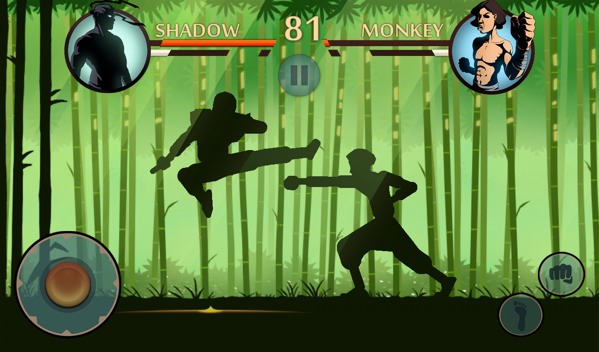 Nekki’s RPG Shadow Fight 2 was one of many new, successful fighting games in May.

No One Dies, another new release in May, added an interesting layer to traditional running games by forcing players to control multiple characters simultaneously. This remix on the classic format gained significant traction in China. 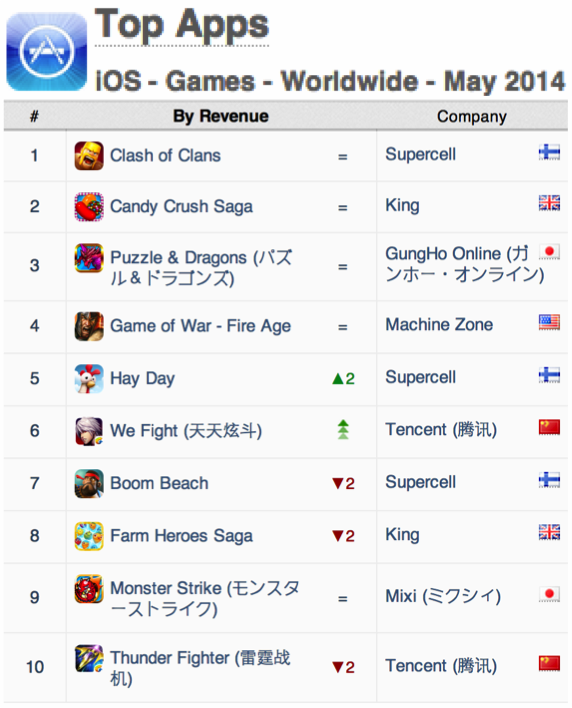 May marks Tencent’s third consecutive month as the top iOS game publisher by downloads, with late-April addition We Fight (天天炫斗)strengthening the publisher’s game portfolio in both downloads and revenue. We Fight (天天炫斗) is a 2D action RPG with fighting elements launched for Tencent’s WeChat platform. The game continued Tencent’s run of new releases that found rapid success in downloads and monetization. 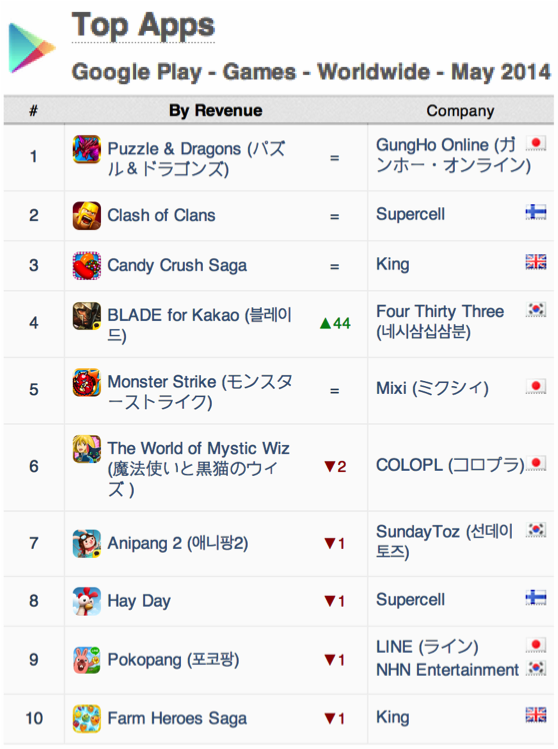 BLADE (블레이드) for Kakao is publisher Four Thirty Three’s latest smash hit on Google Play, achieving the #4 grossing Google Play game worldwide for May, despite only being available in South Korea during the month. This action-based RPG boasts impressive graphics and real-time player vs. player (PvP) battlefields. 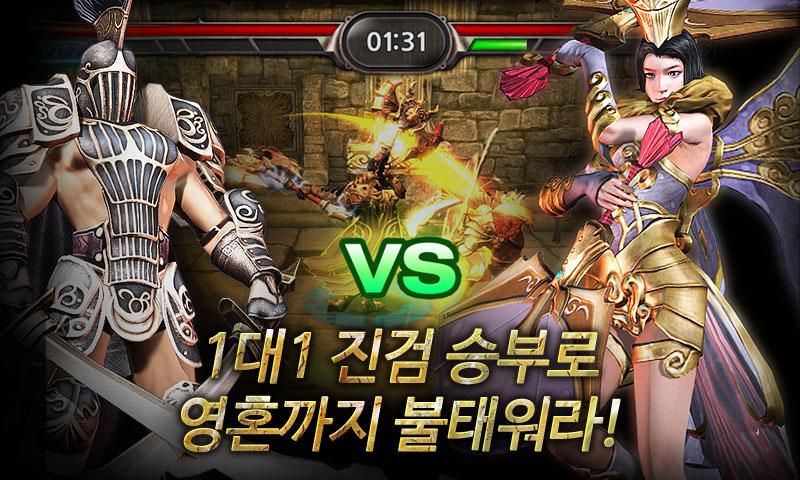 Released in late April, BLADE (블레이드) for Kakao quickly became the #1 overall grossing app in South Korea, holding on to top spot for the entire month of May. This success was the primary driver behind Four Thirty Three’s revenue growth from April to May. With such a strong start, BLADE (블레이드) for Kakao is already projecting signs of long-term success. 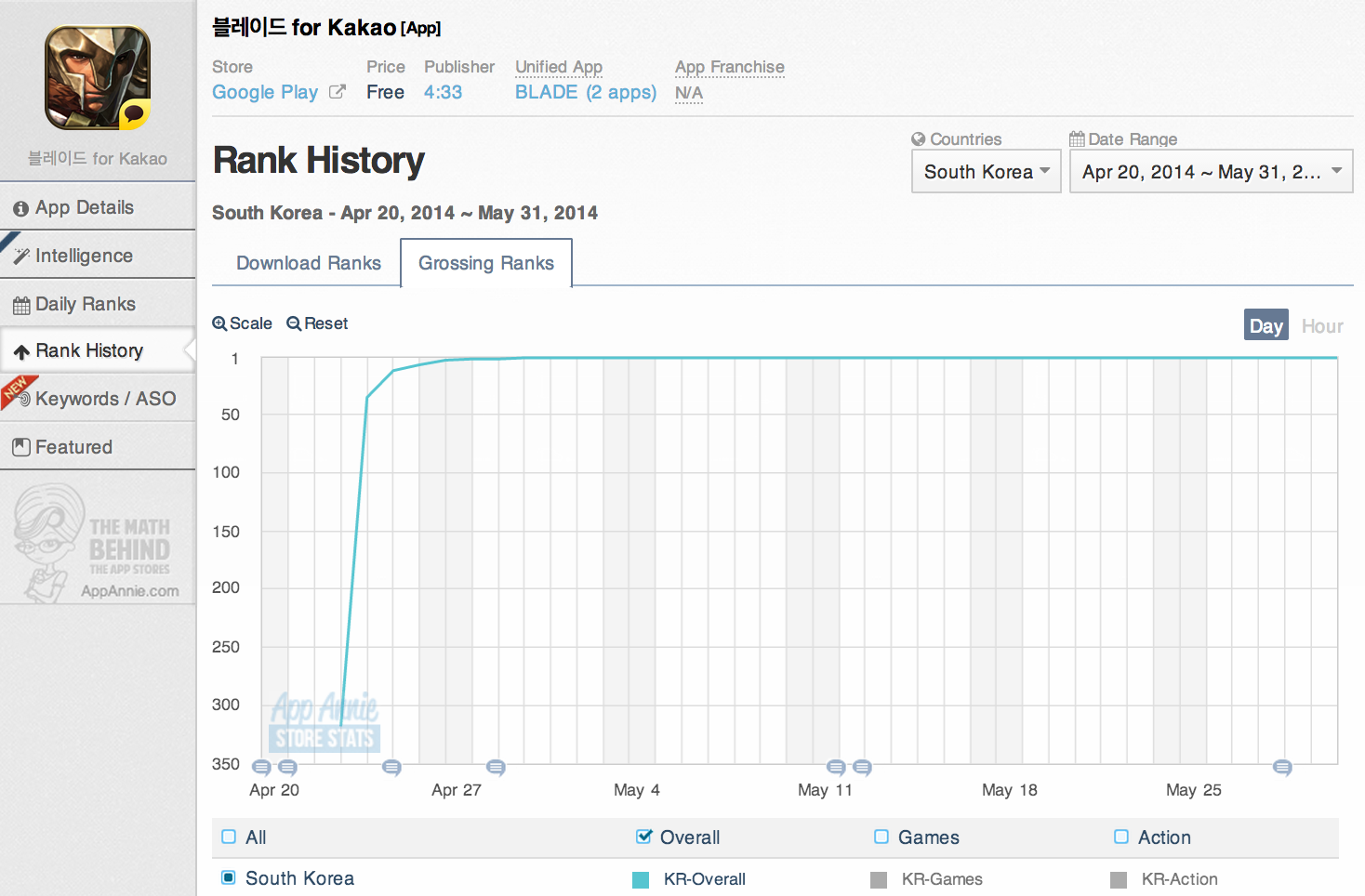 BLADE (블레이드) for Kakao rose at a rapid pace after release to the top rank for Google Play revenue in South Korea.

Comedic Games Are Crowd-Pleasers on iOS

Toilet Time helps users pass the time in the bathroom with mini-games centered around bathroom activities such as hand washing, unrolling toilet paper, and stopping objects from falling into the toilet bowl. The app’s ascent in popularity coincided with a release of new mini-games in late April. Tapps Games talked to App Annie about their surprise hit:

“With over 100 independently developed games published, we have been through a lot. But suddenly having one of our titles among the most downloaded and played games around the world was a whole different experience for us. Standing out like that and reaching millions of people within a very short period of time was very exciting and a boost of encouragement for the entire team.

Toilet Time was hardly one of our biggest bets. In fact, last year we weren’t really sure whether we should stick with it or move on to our next idea. Good thing that we kept it! It’s yet another example of how dynamic things are in the app stores, and how ‘virality’ really come into play sometimes.” - Felipe Watanabe, Marketing Coordinator, Tapps Games 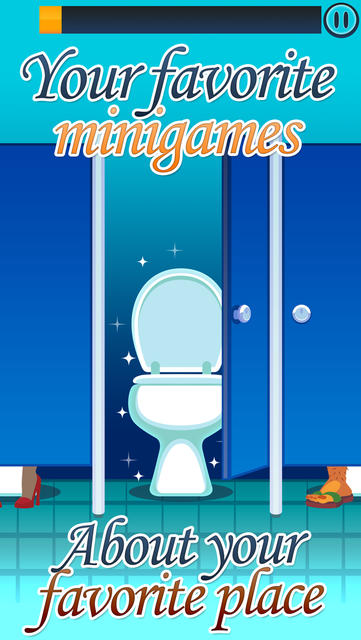 Toilet Time found a niche among players with free time on their hands.

Make It Rain: Love of Money channels the desire to throw money into the air in a more financially responsible and environmentally friendly direction. The game allows players to simulate the action of making it rain by simply by swiping the screen. Instead of losing money, making it rain in the game actually earns players money. These funds can be used for simulated financial and political investments, or even to help keep the authorities from seizing assets. The game found tremendous viral success without any advertising from publisher Space Inch, following in the footsteps of recent hits such as Flappy Bird.

Doodle Mobile’s hydroplane racing game made a splash in several markets on Google Play following its late-April release, including Russia, Brazil and India. Powerboat captains can earn coins to upgrade their vehicles and are also able to race up to four opponents at once in multiplayer mode.

GAMEVIL’s MLB Perfect Inning May release helped the publisher reach the Top 10 in Google Play downloads. The game was a hit with audiences in the US and South Korea, as baseball season is in full swing in both nations. The MLB-licensed game provides a mobile-centric way to play as any of the 30 teams in Major League Baseball.

Spirit Stones, a match-three puzzle RPG in the style of Puzzle & Dragons (パズル＆ドラゴンズ), also contributed to GAMEVIL’s growth. The game’s resurgence came around the same time as an update in late April that introduced new quests. It was noticeably featured on Google Play’s homepage and was especially popular in Russia.

Don’t Tap the White Tile Refuses to Slow Down

Umoni Studio’s popular arcade game Don’t Tap the White Tile saw a big jump in Google Play downloads between April and May, along with the game’s continued growth in the US on iOS. The app was released on Google Play a few days earlier than on iOS, but took a little longer to explode to the top of the charts. However, its downloads continued to grow throughout May on Google Play, driven largely by the United States, the United Kingdom and South Korean markets.

For those of you who are also looking for an update on top apps outside of games, please check out the May 2014 Index for Apps. To keep up-to-date with all the changes at the top of the app and publisher charts, check out the complete set of App Annie Index tables.