Welcome to the App Annie Market Index, the barometer of the macro trends that are emerging in the app ecosystem across stores, countries and categories. We bring you the most complete analysis of the global app market available, using worldwide data that represents over 150 countries on both the iOS App Store and Google Play. This report highlights the trends that are shaping mobile content distribution at the highest level and how it will impact your app business.

The information contained in this report was compiled using App Annie Intelligence, the industry-leading market data solution for identifying opportunities in the app store economy. It provides the most accurate market estimates for global app downloads and revenues - to learn more, take the tour or request a demo today.

Growth in Google Play downloads was driven by explosive growth in emerging markets, with Mexico and Turkey showing themselves as markets to watch. According to IDC, smartphone adoption has grown rapidly in Mexico, increasing around 75% in 2013 and expected to grow by approximately 40% in 2014. Over 65% of these devices used the Android OS, and this proportion is expected to increase in 2014. In Turkey, significant investment in IT and prominent technology projects as part of Vision 2023 and the FATIH education project are contributing to rapid device growth. According to IDC, IT spending is expected to increase around 9% in Turkey this year, driven primarily by the adoption of smartphones and tablets.

iOS App Store revenue growth was driven largely by China and the United States. However, impressive growth extended to smaller markets such as Vietnam and South Africa. Games remained the key category for revenue growth, but Finance apps also gained markedly, with worldwide category revenue growing around 45% quarter-over-quarter. This was boosted by the performance of TurboTax 2013 during tax season in the United States.

Games also topped growth in Google Play revenue, but other categories also saw notable revenue growth. In particular, Communication saw huge gains, and News & Magazines made a significant contribution. While emerging markets drove Google Play download growth, it was established markets such as the United States and United Kingdom that contributed the most to narrowing the revenue gap with the iOS App Store.

According to App Annie Intelligence estimates, the ranking of the top five countries in the iOS App Store by both downloads and revenue remained remarkably stable in Q1 2014. However, there was still significant growth for the top countries with China making strong gains, as it has done for several quarters.

With a substantial rise in both downloads and revenue, China is now a dominant force in the worldwide growth of the iOS App Store. In January, Apple completed a deal to bring the iPhone to China Mobile, the country’s largest carrier with over 700 million subscribers. This deal reportedly drew one million new iPhone users in China in February alone. Rising demand for iPhones in China in Q4 2013 indicates that further gains may also be made for Apple outside of the China Mobile deal. During Q1 2014, downloads in China saw strong growth from apps within the Games, Travel, and Social Networking categories. Revenue growth in China was even stronger than download growth, rising by around 70% quarter-over-quarter. It was again Games that accounted for the majority of growth, with Social Networking apps also making a significant contribution.

The Q3 2013 Market Index noted the dominance of Asia-Pacific countries in Google Play revenue, which continued in Q4 2013. However, in Q1 2014, App Annie Intelligence data revealed a significant shift in the market. The United States saw phenomenal growth in Google Play revenue of approximately 55% quarter-over-quarter, significantly outpacing other countries. This took the United States past South Korea, home to major players in the Android ecosystem such as Samsung and LG. South Korea previously held second place for Google Play revenue in the Market Index since Q1 2013. Revenue growth in the United States was led by the Arcade & Action and Casual Games subcategories. In particular, Clash of Clans saw phenomenal growth on Google Play, coinciding with a series of TV commercials that included a slot in the Super Bowl coverage.

The United Kingdom also saw substantial growth in Q1 2014, gaining around 35% quarter-over-quarter. This was the second consecutive quarter of explosive growth for the United Kingdom, following gains of almost 55% from Q3 to Q4 2013.

Overall, there was considerable stability in the rankings of the top categories worldwide in both stores in Q1 2014. Games continued to dominate downloads and revenue, accounting for around 75% of revenue on the iOS App Store and approaching 90% of revenue on Google Play. App Annie Intelligence shows that Games led growth in both downloads and revenue on both app stores, with China the leading contributor on iOS and the United States driving Games growth on Google Play. However, growth also occurred outside of Games on Google Play, helping narrow the revenue gap with iOS. 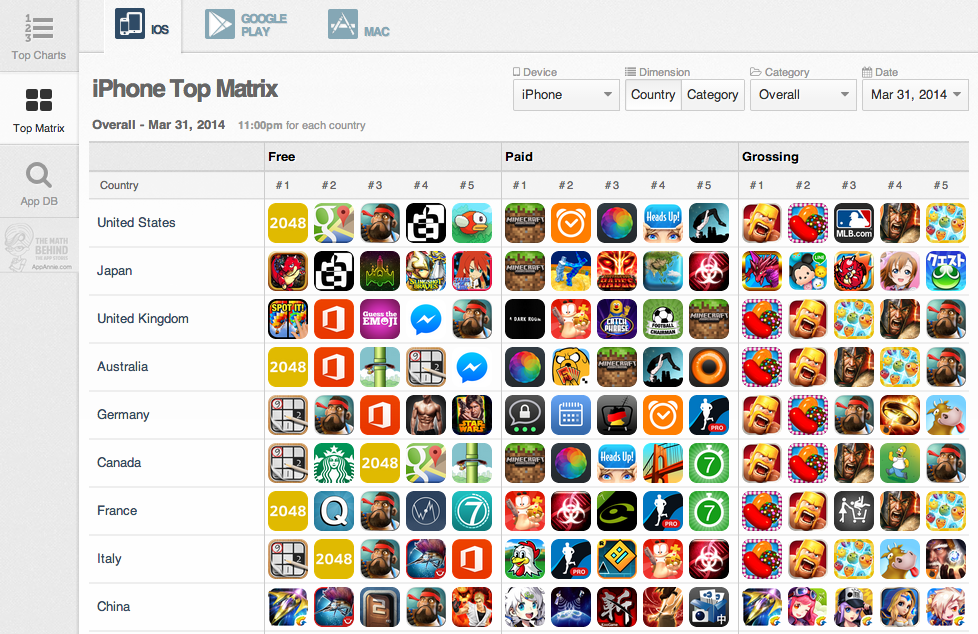 Games continued to dominate the grossing ranks on the iOS App Store. View this interactive Store Stats chart and many others free here.

Messaging apps made substantial waves throughout Q1 2014 with headline news such as Facebook’s acquisition of WhatsApp, Rakuten’s acquisition of Viber Media, and Alibaba Group’s investment in Tango. The growing importance of these apps was reflected in both downloads and revenue for the related categories – Social Networking on iOS and Communication on Google Play.

On Google Play, Communication downloads expanded dramatically in Mexico thanks to WhatsApp Messenger, Facebook Messenger, and Telegram. Communication revenue also saw a big rise, particularly from Taiwan and Germany. LINE performed strongly in Taiwan, and WhatsApp Messenger and Threema made major strides in Germany. Swiss-owned Threema places a strong emphasis on security, using end-to-end data encryption for all messages. Revenue from paid downloads of Threema grew notably in the wake of Facebook’s WhatsApp acquisition, indicating gains may be related to the tighter data protection laws and possible privacy concerns in Germany.

On iOS, Social Networking moved up the download ranks, boosted by strong growth in China and Russia. The effects of messaging apps even extended to Games on iOS, with much of the revenue growth in Games coming from WeChat’s gaming platform in China. On the last day of the quarter, four of the top five grossing games for iPhone in China were published by Tencent for the WeChat platform.

The Tools category was also key to helping Google Play narrow the revenue gap. Worldwide, four of the top five apps in the Tools category by Google Play revenue focused on anti-virus and security functions. A recent report classified 42% of Android apps as “malicious, unwanted, or suspicious”, and noted an escalating threat to Android phones. An increasing awareness of these threats may have spurred the increase in revenue for anti-virus apps on Google Play. 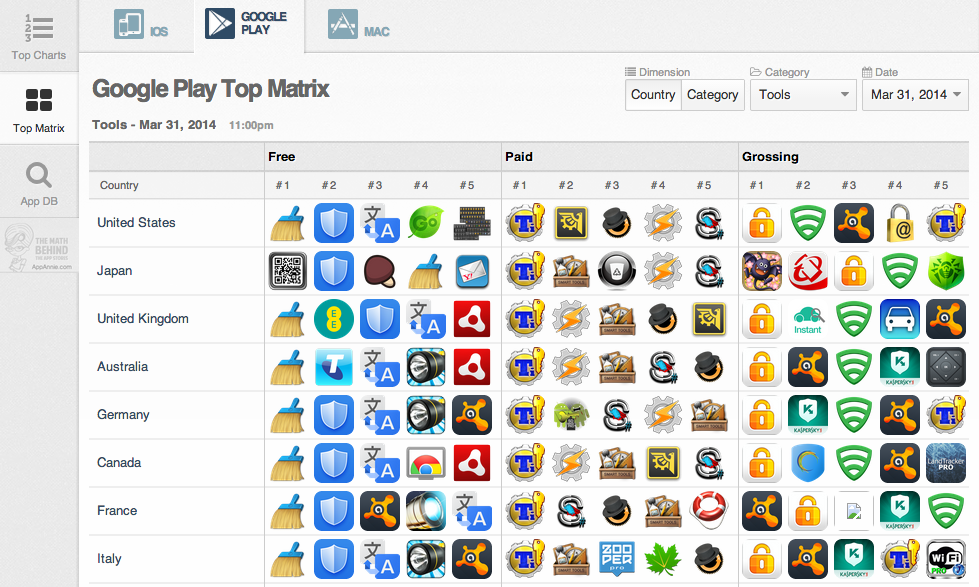 To get access to the market data solution behind these insights, take a tour of App Annie Intelligence. It provides the most accurate market estimates available for the downloads and revenues of apps globally. To get an update on the top apps on the iOS App Store and Google Play for February 2014, please be sure to check out App Annie’s latest Games Index and Apps Index.