Welcome to the App Annie Market Index, where at the end of each quarter, we review the latest download and revenue insights by stores, countries and categories. In addition to our monthly Games and Apps Index, the Market Index provides you with a macro view of the trends, helping you identify where to look for the most fertile investment opportunities in the app stores.

The top of the country rankings for downloads and revenue in the iOS App Store and Google Play remained stable, but a couple emerging markets stood out from the pack in Q2 2013:

Games continued to dominate the share of revenue for both app stores, and still accounted for a greater share in Google Play where it comprised over 80% of revenues vs. roughly 75% in the iOS App Store.

While country rankings remained relatively stable, there was significant movement in a number of categories during Q2 2013:

Russia continues its strong growth and breaks into the top 5.

The United States and China retained their positions at the top of the rankings and combined to make up about 40% of total iOS App Store downloads in Q2 2013.  China’s iOS downloads continued to grow at an impressive rate, underscoring the country’s eventual potential for the iOS App Store, as mentioned earlier in the December 2012 App Annie Index. China is a unique market because it isn’t dominated primarily by the iOS App Store and Google Play.  Baidu, China’s leading search engine, announced on July 15, 2013 that they signed a memorandum of understanding to purchase 91 Wireless, one of the leading third-party app stores that deliver both iOS and Android apps.  Third-party app stores play a significant role in the Chinese app economy, both for Android devices that can’t connect to Google Play and jailbroken iPhones.

Russia climbed three spots and broke into the top 5 in Q2 2013, continuing an impressive growth rate that saw them pass six other countries since Q2 2012, when they were the 11th ranked country by iOS downloads.  This meteoric rise in the rankings echoed the gains they made in Google Play downloads where they climbed from #9 in Q2 2012 to their current position at #4.  However, their position in the iOS App Store download ranking could be at risk after news that one of Russia’s top mobile operators, Vimplecom, joined MTS and Megafon, Russia’s other largest mobile operators, in their decision to stop selling the iPhone.  One issue that complicated the iPhone negotiations is that Russia does not allow mobile operators to subsidize handset sales.  Mobile operators will still push iPad sales and Russian consumers will still be able to purchase iPhones through the mobile operators’ resale stores and other mobile phone, but this could slow down the iOS App Store’s growth.

Brazil joins India and Russia to strengthen Google Play’s position in emerging markets.Google Play saw Brazil climb two spots to join India and Russia as another emerging market in the top 5 countries by downloads for Q2 2013. Brazil’s growth was driven in particular by the gaming category. Android’s open platform has given Google Play a very strong position in these markets because cell phone manufacturers like Samsung, Nokia, HTC and LG are offering cheaper handsets and already have established distribution channels to market and sell their products. The combined downloads for the United States, South Korea and these three emerging markets comprised over one-third of the total Google Play downloads in Q2 2013.

Lifestyle apps climb to #4 while the top 3 categories maintain their rankingsThe Games category maintained its dominance in the iOS App Store, accounting for roughly 40% of store downloads in Q2 2013. Photo & Video held onto the #3 position it achieved in Q1, but Utilities fell to #5 as the Lifestyle category rose to #4. 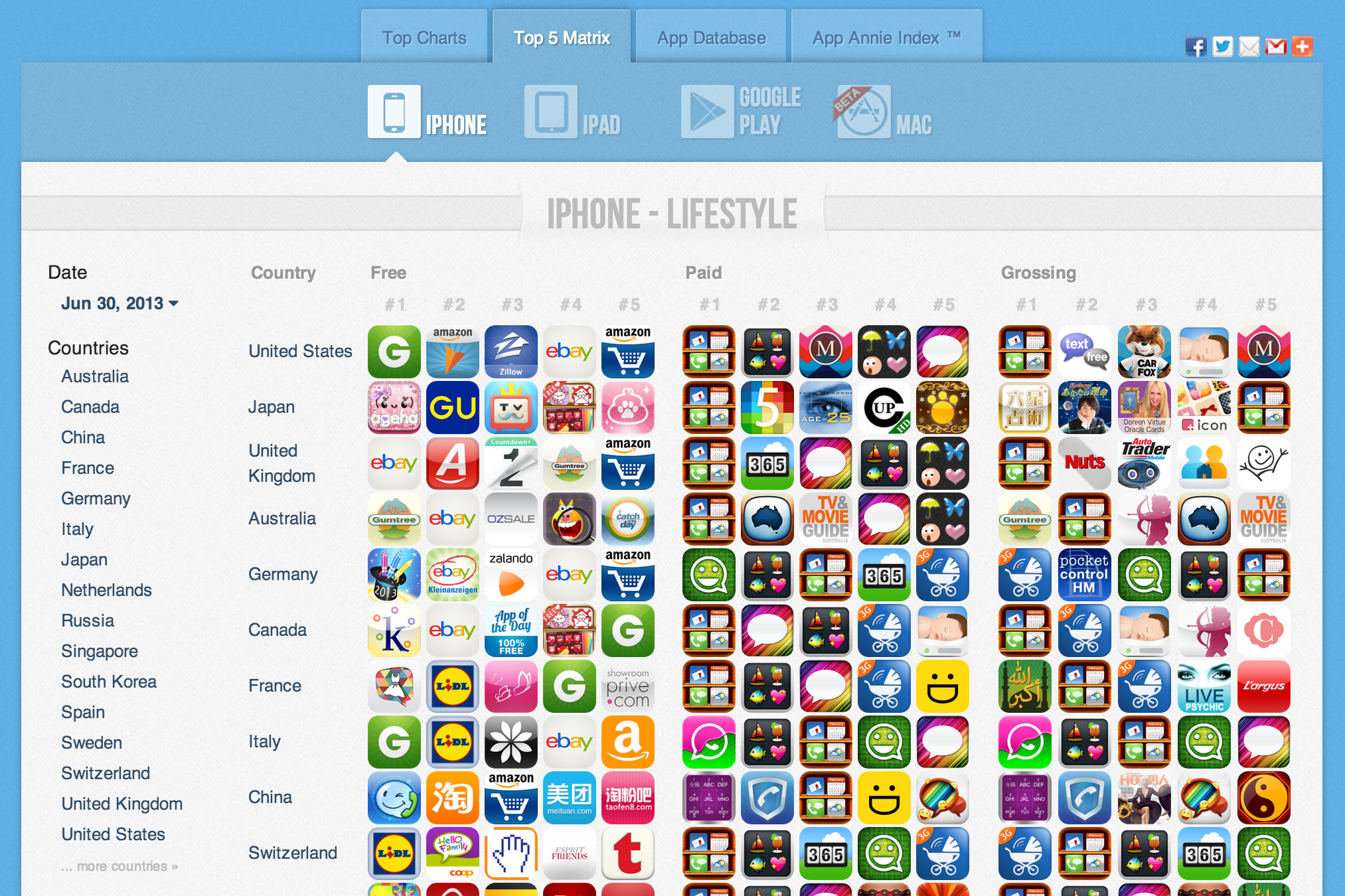 Apps like eBay, Emoji, and Groupon helped propel the Lifestyle category over Utilities.
Check out these apps on Store Stats.

Social Networking and Music apps unseat the Productivity category for the first time in the past four quartersGames continued to dominate, accounting for nearly three-quarters of total iOS App Store revenue in Q2 2013, up from about 70% in Q1. The Social Networking and Music categories have grown their revenue dramatically in the past year and unseated Productivity, which has held the #2 spot for the past year. Social Networking apps climbed six spots from #8 in Q2 2012, while the Music category climbed four spots from #7 during the same time period. One interesting aspect of Social Networking’s rise in the iOS App Store revenue rankings that was covered in the February 2013 App Annie Index is that it was not mirrored by a similar rise in the store’s download rankings, meaning that the category’s level of monetization drove growth more than an expansion in the user base. 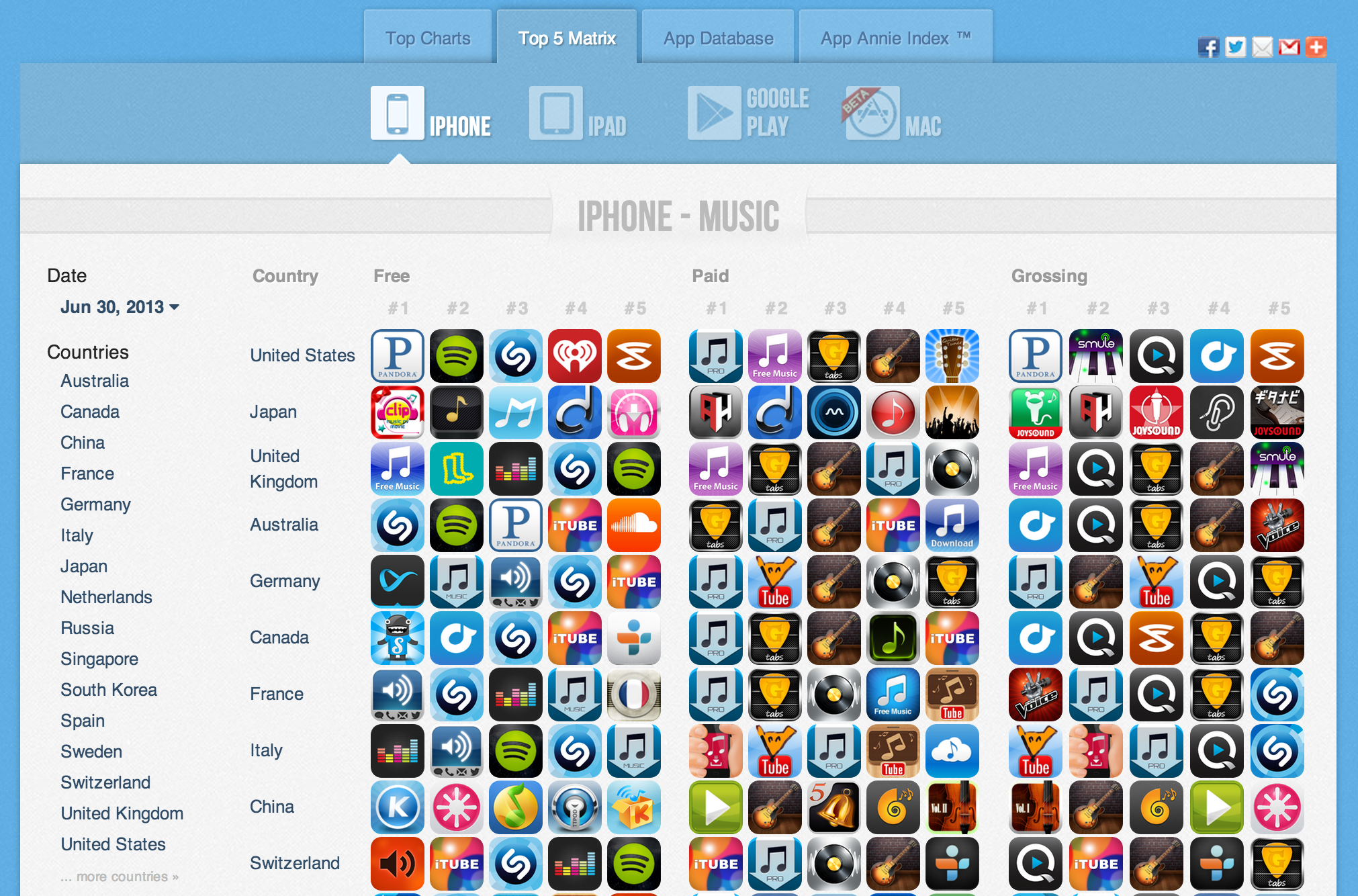 Pandora, Magic Piano, and Radio help guide the Music category into the Top 3.
Check out these apps on Store Stats.

Communication climbs into Top 2 ahead of Tools and Entertainment.Games continued to lead Google Play downloads in Q2 2013 and still accounted for about 40% of all downloads, but the Communication category rode a wave of momentum that pushed it ahead of Tools and Entertainment. Although the Tools, Entertainment and Social categories grew at a slower rate than the Communication category, they all still had strong gains in the past quarter that enabled them to hold onto their top 5 ranking. While the categories for the iOS App Store and Google Play are defined differently, there seems to be a trend across both app stores where functional categories like Utilities, Tools and Productivity are not keeping up with more connective categories like Social Networking and Communication. 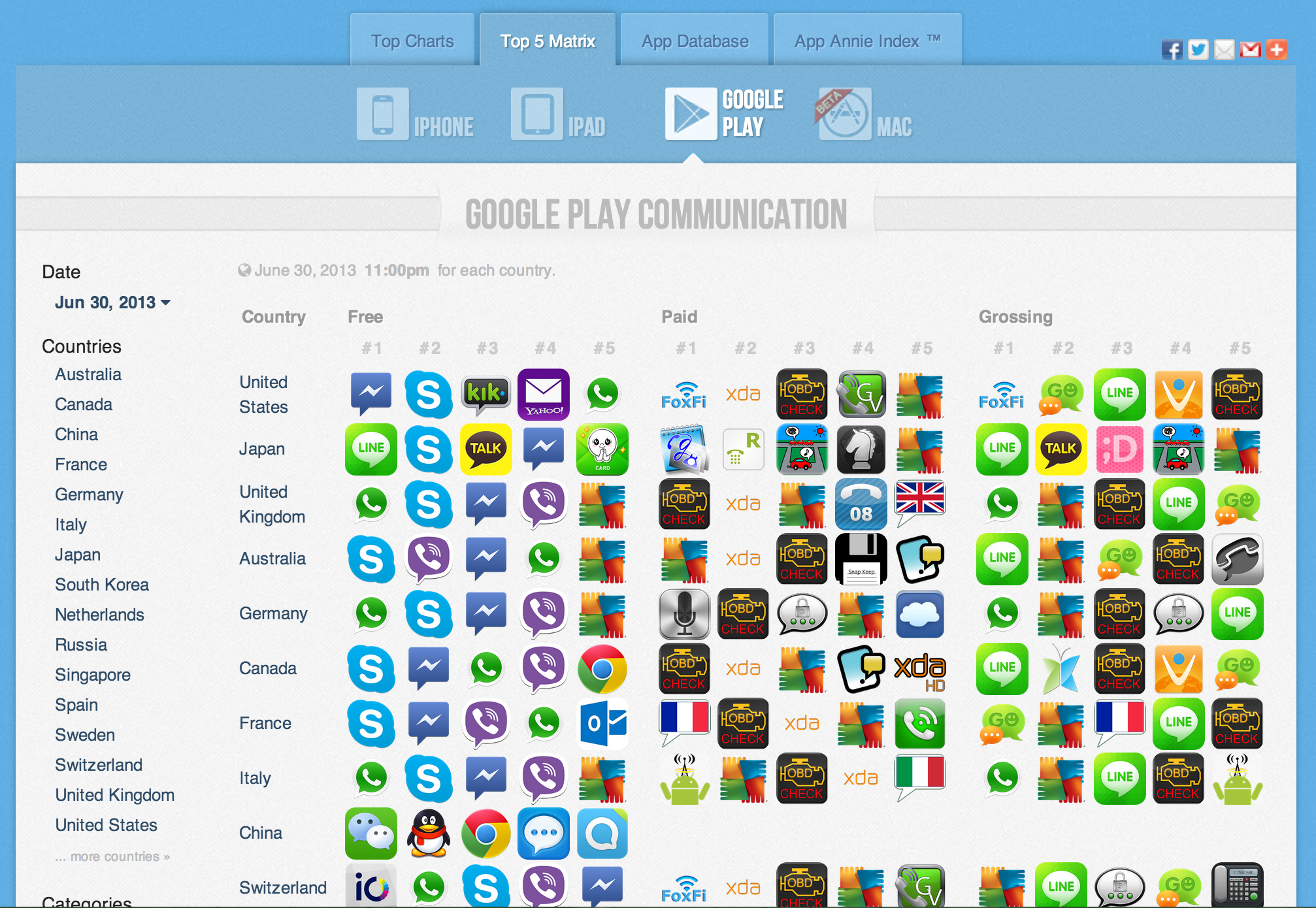 LINE, WeChat, Skype, WhatsApp Messenger, and Viber propelled the Communication category into the Top 2 for Q2 2013. Click here to access this interactive chart for free.

The Games category continues to drive revenue while Travel & Local cracked the top 5.The Games category continued to drive revenue in Google Play, and still to a greater extent than the Games category in the iOS App Store. As of Q2 2013, Games in Google Play accounted for over 80% of revenue, compared to roughly 75% for the iOS App Store. Games might have been the main driver of Google Play’s revenue growth, but the Communication category also saw solid growth to retain its position at #2. Although it did not grow as much as Games or Communication, the Travel & Local category grew enough to push it into the top 5, displacing the Productivity category that held the #5 spot in Q1 2013. 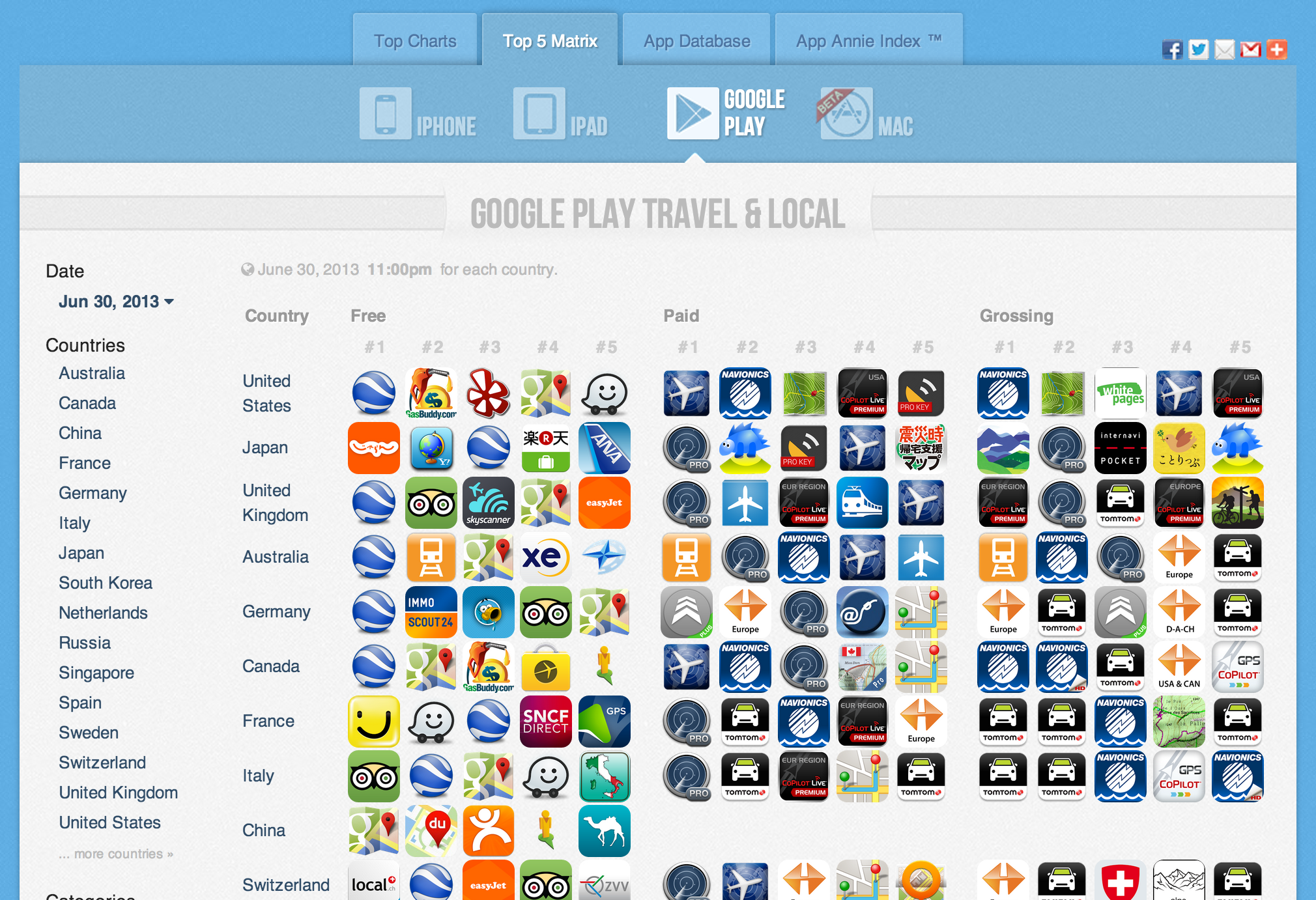 Travel & Local category revenue was led by navigation apps.
To see this chart and others like it for free, click here.

To get an update on the top apps in the iOS App Store and Google Play for June 2013, please be sure to check out App Annie’s latest Games Index and Apps Index. Subscribe to the blog below, follow us on Twitter or ‘like’ us on Facebook.