Black Friday, Cyber Monday & Singles Day 2017: The Battle for the Top Mobile Shopping Day in the US

On a global scale, however, both Black Friday and Cyber Monday were dwarfed by China's Singles Day 2017 on November 11, 2017. A national holiday when consumers are encouraged to buy gifts for themselves, Singles Day made the biggest splash for online shopping setting a record $25.3 billion in sales, with 90% of transactions coming from mobile. That being said, Black Friday still remains the anchor of the largest shopping period in Western countries like the US and the United Kingdom.

Considering the massive opportunity presented by special shopping days like these, it is important for retailers to carefully consider app strategies that lead to success during the holiday season in order to capitalize on attracting new users and re-engaging existing users. Each user represents a potential customer that can be reached on their most personalized and connected device.

Singles Day, Black Friday and Cyber Monday were key days for companies to increase app downloads, grow their mobile shopping base and ultimately increase revenue. While all three days fared well in the US, Singles Day was the #1 day for iOS and Google Play combined Shopping app downloads as of November 28, 2017 saw over 2.7 million downloads on just one day. Black Friday came in second by a narrow 1% margin. 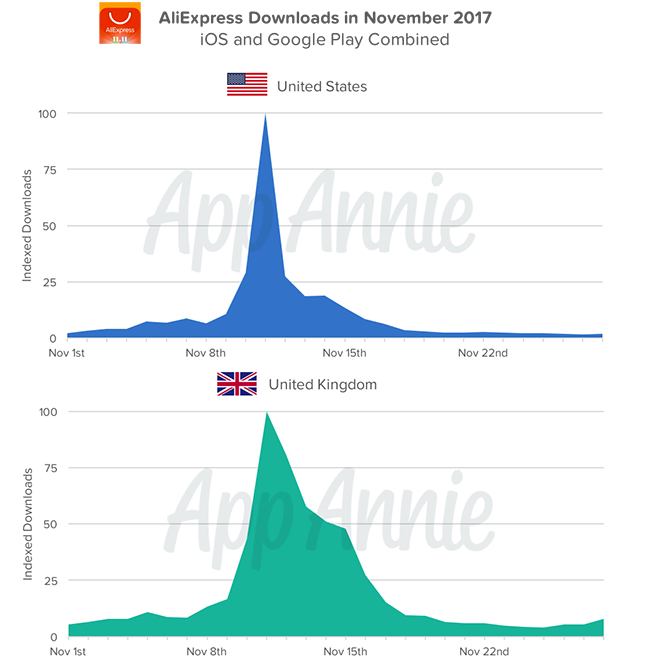 Alibaba was able to use Singles Day 2017 to dramatically increase its user base in the US. AliExpress alone contributed 50% of the iOS and Google Play Shopping app downloads for the top 10 apps on Singles Day in the US and had a 300% lead over the next largest app on this day. While a similar story is true of Amazon’s download performance on Black Friday, its download lead was not as stark since Amazon already has a large download base in the US. 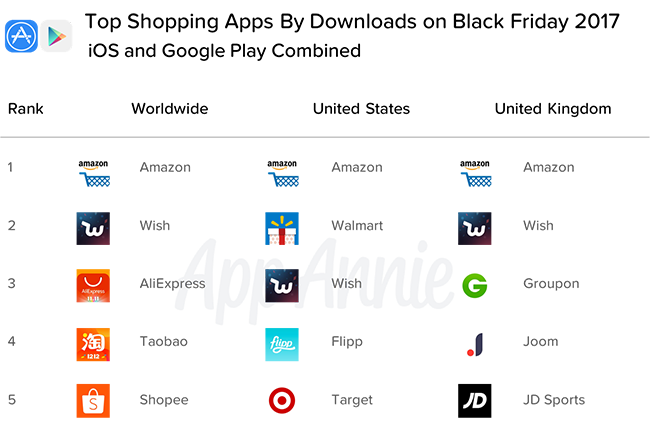 Despite Singles Day generating the most Shopping app downloads ever in the US, the week of Black Friday 2017 drove the most app usage. 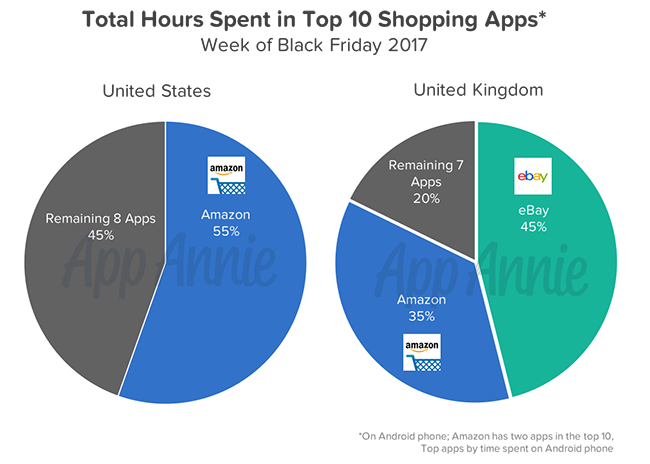 We’ve seen Black Friday and Cyber Monday extend its influence throughout the month of November over the past few years. In 2017, Singles Day kicked off the holiday season even earlier in the US and the UK. We expect to see Black Friday and Cyber Monday’s influence extend throughout December with gains to active users and user engagement. This creates more opportunities to generate sales throughout December and into the new year.

Mobile is instrumental to a retailer’s success, impacting all stages of a shopper’s journey from initial research, to coupons and loyalty programs and ultimately to purchase. With the holiday shopping season starting even earlier and influencing mobile shoppers long after, it is imperative for retailers to reflect on and analyze 2017’s Black Friday performance in order to capitalize on new users going into 2018 and to prepare for next year’s holiday season.

To track downloads around the holiday season and gain access to data for millions of apps, sign-up for App Annie Intelligence for free right now.