How to Leverage Your Market Data to Create Hit Apps

Chad Mureta is author of App Empire and founder of three mobile application businesses that he sold for millions. He has spearheaded the development and marketing of over 60 apps, which have been downloaded over 50 million times worldwide. He's been featured on 60 Minutes, Tech Crunch, The Four Hour Work Week. App Empire is a proud customer of App Annie for over two years as Chad has worked with indie developers and small companies to position them as forerunners in the mobile app marketplace.

As with any business, your success will be directly related to your understanding of the marketplace. The app stores are the marketplaces of the app business, so in order to understand the market, we have to become a motivated and consistent student of it. This may seem rather obvious, but you wouldn’t believe how many developers I meet that don’t understand this crucial concept. Unsuccessful devs don’t watch or listen to the market and they end up paying a huge price for it.

In order to become a great app supplier, you must first become an app addict. That means spending at least 2-4 weeks researching the market while downloading and playing with tons of apps (give yourself an app budget of $100 to start). This training period not only should be a lot of fun but is also an investment in your expertise, which will become the lifeblood of your success. The more hours you rack up playing around and studying successful apps, the better you’ll be able to understand their common traits and what users desire.

So, how do you keep pace with the market? The best way is to study Apple's cheat sheet constantly. App Annie displays the App Store’s top paid, top free, and top-grossing apps, as well as rank history. You can also view the same lists in the individual app categories.

Note: Market research is about understanding and moving with the marketplace, which is true for any app store. We’re using Apple’s App Store as the example, but you can track Google Play, Amazon and Windows Store on App Annie as well.

These charts are golden because they tell us volumes about the market. The best part is this information is freely accessible to anyone, at any moment (unlike the market info for basically every other industry).

Review these charts frequently, and keep a notebook of potential trends you spot. App Annie releases the App Annie Index report monthly, be sure to scan this for app market insights. Doing this repeatedly will educate you on successful app design, marketing, and various pricing models. The research you’re doing is simple, costs nothing, and it’s actually fun!

How to Study the Market

When first researching the market, I do an initial run-through of the top charts. I circle apps that interest me and common trends that recur. Once you gain more app experience you will be able to do this relatively fast, but if you’re new at market research, take your time to properly assess what you’re looking at. Look for apps with these characteristics:

Popular: This type of app shows up multiple times on the top charts.

Inexpensive: The design and functionality of this app can be made inexpensively. You might be surprised by how cheaply some apps can be made. Brainstorm with your team on ways you can save costs. Are certain features really needed for the first version? Is there existing code you can use? If the app still proves too costly, move on.

Scaleable: Can I create more apps from this code AKA can I “skin” this app? Download a couple apps from one company and you may notice some apps look similar. This is because they took code from one app and revamped it to create a different app. You want to be able to use your code for more than just one app, even if it's just parts of a code for the highest ROI.

Two very similar games by the same company. Ruzzle has been on the top charts for a couple weeks now.

Value: This might take a little more digging than just an initial run-through of the charts. Some you may already know that you can’t add more value (such as apps Apple no longer accepts), but others you need to play with the app yourself and look through reviews to see what can be improved.

Note: There is no definitive list of apps that Apple no longer accepts, but in the Apple Developer Guidelines (which you should always review thoroughly before submitting an app), they state that they won't accept apps that have many duplicates in the App Store, and mention “flashlight, kama sutra, fart apps, etc.” Most recently, Apple stopped accepting more Emoji apps. Another good resource is online developer forums. Ask around to see what’s being rejected.

Here are some examples of eye catching apps: 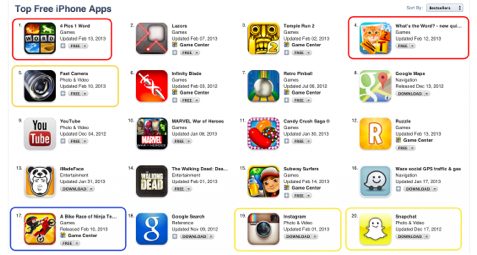 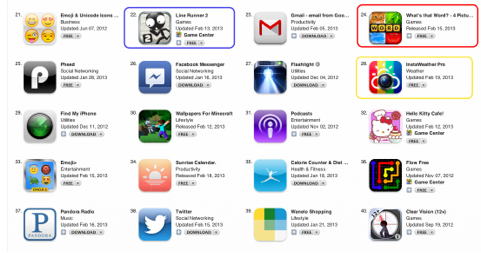 Popular? These are actually newer in popularity on the charts and they’re hot right now. However, note the difference: quiz apps are not new, they’re a new trend because they’re popular right now. App Annie conveniently provides data on an app’s increase or decrease in rankings. Things like this can only be noticed from watching the charts weekly.

Cost? Quiz apps would not be expensive to develop. They can be made with a simpler UI. There’s no need for backend, 3D graphics, or advanced features that would bring up costs.

Scaleable? You can create multiple themed quizzes as an example of skinning this code.

Value? There are many types of quizzes people would enjoy. Research to find what could create the best user experience. Currently, photo and icon quizzes seem to be the most valued.

Popular? Camera apps have always been popular and will continue to be. However, note the importance of the social aspect with camera apps in today’s marketplace.

Cost? Relatively cheap depending on functionalities included. Filters and effect apps can be made anywhere from $3 - 10K depending on features. There’s a huge range when it comes to app development. The market is so fresh, there are no standard business prices yet.

Scaleable? There are many types of camera apps you can create. Themes, filters, frames, etc.

Value? Dig through the reviews. Since camera apps have been popular for a longer time, it will require a little more research to find what added value you can bring.

Cost? These can be expensive, but they can also be designed cheaply as well. You just need to do your research and look around for buying code or cheaper developers. Previously, games were really expensive to develop compared to utility or productivity apps. When I originally began developing, I aimed to keep my budget under $10K per app, and games would always cost double, triple, or quadruple that budget. I still aim to develop under $15K, but more available code, an increased appetite for games, and a growing network of new developers has made games easily fit this budget.

Scaleable? Definitely. Multiple types of games can be created from this code.

Value? Read the reviews. Customers are pretty critical of games, so there will definitely be reviews wishing for certain features or functionalities.

Here are some questions to ask while you’re researching successful apps in the market:

1. Why is this app successful?

2. What is its rank and has it been consistent? (Use AppAnnie to research its history.)

3. Why do people want this app? (Look at the reviews.)

4. Has this app made the customer a raving fan?

5. Does this app provoke an impulse buy?

6. Does this app meet any of my needs?

7. Did I become a raving fan after trying it?

8. Will the customer use it again?

9. How are they marketing to their customers? (Check out the screenshots, icon design, and descriptions.)

10.What is the competitive advantage of this app?

11. What does this app cost? (Research the web, get quotes.) Are there in-app purchases? Advertisements?

For example, I circled 4 Pics 1 Word. Let’s examine that app:

1. Why is this app successful?

Relatively easy to play. “Quiz” is a commonly understood game-play. Therefore, wide audience. Has that “addicting” quality of continual game-play and rewards. Visually stimulating since it revolves around pictures.

2. What is its rank and has it been consistent? (Research its history) 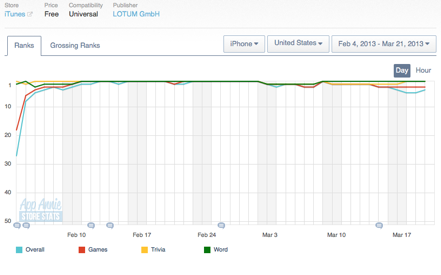 3. Why do people want this app? (Look at the reviews.) 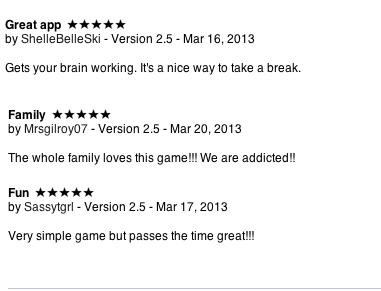 4. Has this app made the customer a raving fan?

Raving fans will share with more people. Viral-appeal is important for apps.

5. Does this app provoke an impulse buy?

Yes, because it’s free. Easily accessible. IAPs are the revenue-generating impulse buy. Some pictures are really hard. Unless you have the points, you have to buy coins from the store for hints. Due to the app’s addictive nature (confirmed by reviews), users are willing to buy IAPs to progress in the game. 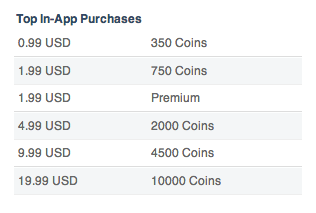 6. Does this app meet any of my needs?

Competitiveness. Reward system. Fun, mindless way to pass time, which is a common use for apps. Commuters, waiting in line, watching TV - all popular times for using apps.

7. Did I become a raving fan after trying it?

Very enjoyable game. I’ll be honest, I’m not that much of an app gamer, I just like creating them, Therefore, I ask people on my team, my family, and my friends for their opinion on how much they like certain games and why. It’s important to treat app research as collaborative. It’s easy to get tunnel vision when deciphering information.

8. Will the customer use it again?

Levels, coin rewards - reasons to return more than once.

9. How are they marketing to their customers? (Check out the screenshots, icon design, and descriptions.)

Good icon. Screenshots could be more exciting, but they are still visually appealing because of the quality UI.

10. What is the competitive advantage of this app?

11. What does this app cost? (Research the web, get quotes.) Are there in-app purchases? Advertisements?

I got a quote from my developer for two quiz apps of this style for $6K (so $3K per app). Yes, IAPs and Ads are where the money is for these apps.

Most developers will build an app and expect tons of people to find and download it right away. That rarely happens. You have to figure out what people are interested in and the kinds of apps they’re downloading first, then you build your app based on that insight. A well-research app idea will continue to generate revenue for years.

Once you’ve put in the necessary 2-4 weeks of research and feel you have a decent grasp on the market, it will be time to look back on the trends you discovered and explore some ideas for potential apps you can develop. Remember to add additional value to an app idea, not just a replica of the apps you researched. This provides the competitive edge you’ll need to beat the competition.

Ask yourself these six questions to develop your idea from your researched trends:

Nothing beats well-researched app ideas to create a successful, passive-income app business.  Remember to be objective when researching and get out of your own way. It’s easy to get caught up in what you and your buddies think would be a great app idea rather than listening to the marketplace.  Once you start generating revenue, then you can look into developing that risky app idea you’ve been hungry to try. Until then, think sustainability first.

There’s a ‘right way’ and ‘wrong way’ to get downloads with apps -- and it’s all dependent upon how you build your business (and how you perform market research) -- For this reason, I’ve created a free appreneur startup guide that shows you how to get your app business up and running in just 8 days. 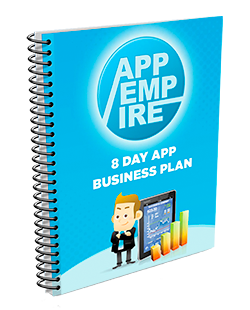