We’re excited to offer the first-ever China App Annie Index for Apps! Each month, the China App Annie Index will reveal insights into the hottest mobile app properties outside of games for the iOS App Store in China. This report highlights app movements that reflect larger macro trends in the Chinese economy, as well as key traits unique to the Chinese market, like the proliferation of local publishers in the Top 10. In fact, every single app and publisher featured in the June Top 10 for apps outside of games is Chinese.

To find out what’s hot in China in games, please check out the China App Annie Index for Games.For more information on global top apps and publishers, see the Worldwide, United Kingdom and United States charts for June. 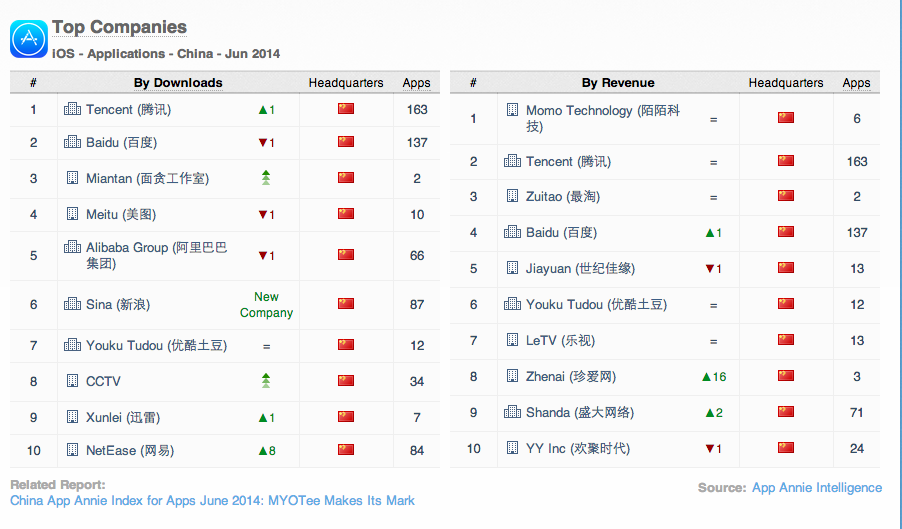 Avatar creation app MYOTee (脸萌) shot to the top of China’s iOS download rankings in June rising up from well outside the top 100 in May. The brainchild of big-dreaming former Tencent product manager Lie Guo, MYOTee allows users to design custom avatars which can then be shared via messaging and social media apps.

Users choose from a variety of facial structures and add-ons to design their avatars. 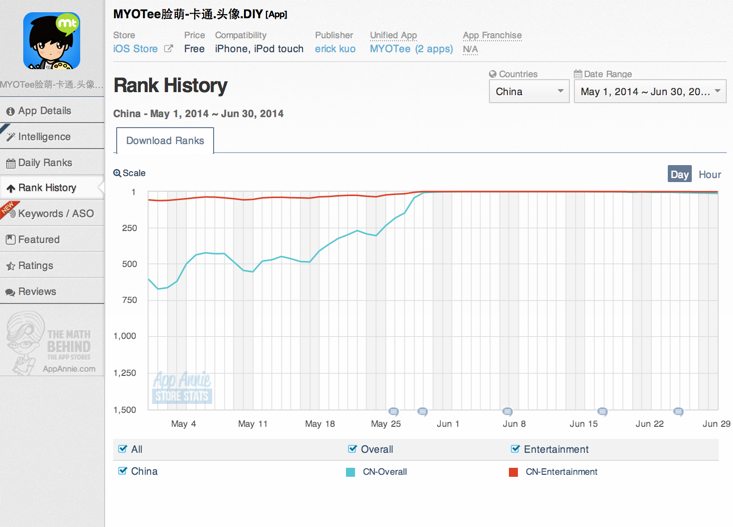 MYOTee was the most downloaded Overall app in China for June 2014. 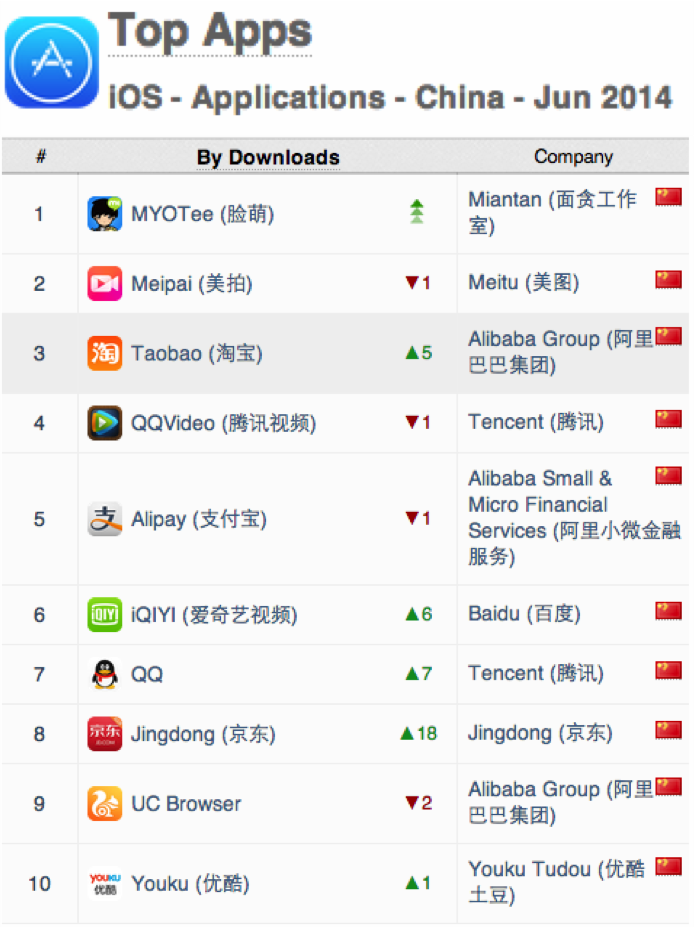 In the retail sector, Taobao and JingDong both rose significantly from May 2014 to June 2014, capturing the #5 and #8 spots in the iOS Top 10 apps excluding games by monthly downloads.Alibaba’s Taobao and Jingdong’s self-named app are China’s largest e-commerce companies, with the former focusing on consumer-to-consumer transactions, and the latter traditionally focusing on business-to-consumer sales. Much of JingDong’s success in June can be attributed to their 11th annual “618” promotion, which has evolved into a promotional war among numerous Chinese e-commerce retailers. However, after raising $1.78B in an IPO earlier this year and assuming control of Tencent’s e-commerce operations via strategic partnership, Jingdong relaunched Tencent’s PaiPai online C2C marketplace in a direct attempt to compete with Alibaba’s Taobao and Tmall. The presence of Taobao and Jingdong in China’s June iOS Top 10 apps by downloads differed from worldwide rankings, where no e-retailers made the Top 10. 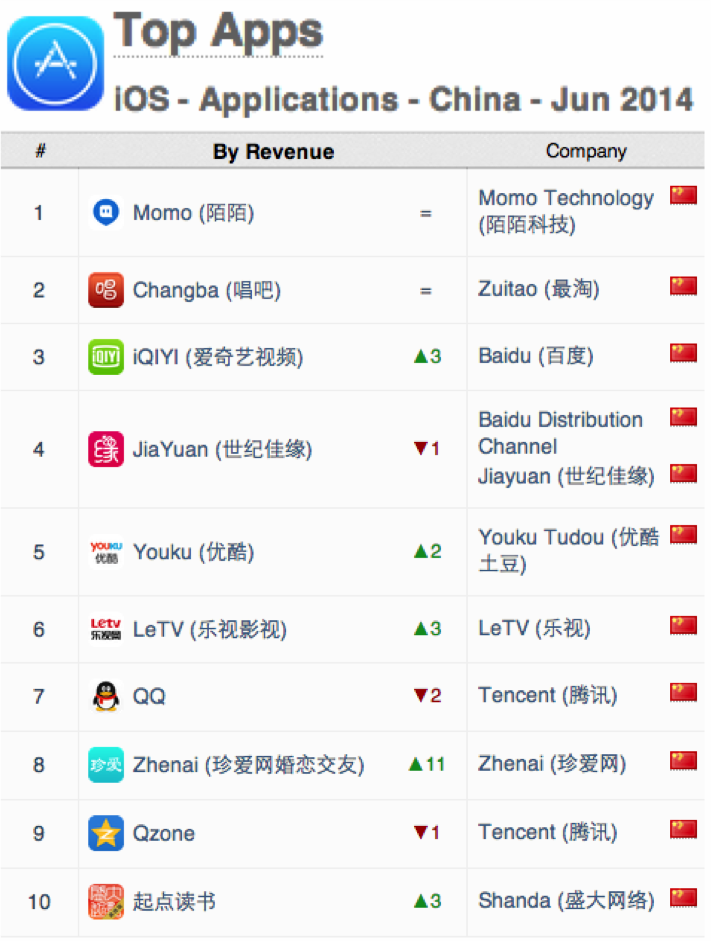 In June 2014, iQIYI, Youku and LeTV all rose month-over-month in the Top 10 iOS apps by revenue, which can be attributed to several key factors. While China’s smartphone market continues growing, demand for mobile video content also continues rising, as Chinese users watch mobile videos on their phone at a higher frequency than users from other countries. According to research, the biggest drivers for mobile video consumption were screen size, 4G networks and video quality. That’s great news for subscription-based video content apps like iQIYI, Youku and LeTV, since phablets comprising nearly 40% of smartphone sales in China in Q1 2014. Couple that data point with Chinese carriers’ long-term commitment to building out 4G infrastructure, and it doesn’t seem like Chinese consumption of mobile videos is going to slow down anytime soon. Apple appears to be planning an entrance into the phablet feeding frenzy as well, with Taiwan’s Economic Daily News citing rumors that 5.5-inch iPhone 6 production will begin in mid-August.

As mentioned in the June 2014 China Games Index, Chinese companies and apps comprised a large portion of China’s top games charts in the iOS store in June 2014. However, the domestic dominance is even more pronounced in apps outside of games, where Chinese companies occupied every single spot in the June Top 10 for both apps and publishers. In China, the closest a foreign company came to cracking the Top 10 in Q2 2014 was Microsoft with its Microsoft Word app, which got as high as #14 in the iOS revenue rankings for April 2014.

Love is in the App Store

Dating apps continued their success in China, with Zhenai joining mainstays JiaYuan and Momo in the June 2014 iOS Top 10 Apps by monthly revenue. Jiayuan’s titular publisher also leapt into the Top 10 thanks to the app’s strong performance. Whereas Zhenai and JiaYuan focus more on long-term relationship matchmaking, Momo has gained widespread traction through its find-and-flirt capabilities.

Reading Origin rose three spots to finish at #10 in the Top 10 Apps by monthly revenue. Reading Origin offers a massive library available for offline reading, exclusive content and a reader rating system. It has consistently been one of China’s top-grossing apps in the Books category.