We’re excited to offer the first-ever China App Annie Index for Games! Each month, the Index will reveal insights into the hottest mobile game properties for the iOS App Store in China. The China App Annie Index highlights app movements that reflect larger macro trends in the Chinese economy, as well as key traits unique to the Chinese market, like the proliferation of local publishers in the Top 10. Incredibly, only four of the twenty games featured in the June 2014 index were published by non-Chinese companies.

To find out what’s hot in China in other app categories, please check out the China App Annie Index for Apps. For more information on global top apps and publishers, see the Worldwide, United Kingdom and United States charts for June. 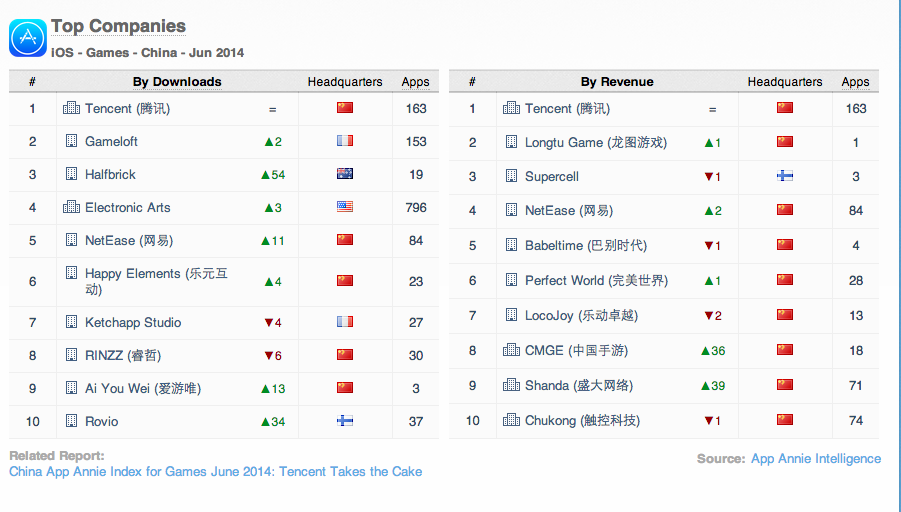 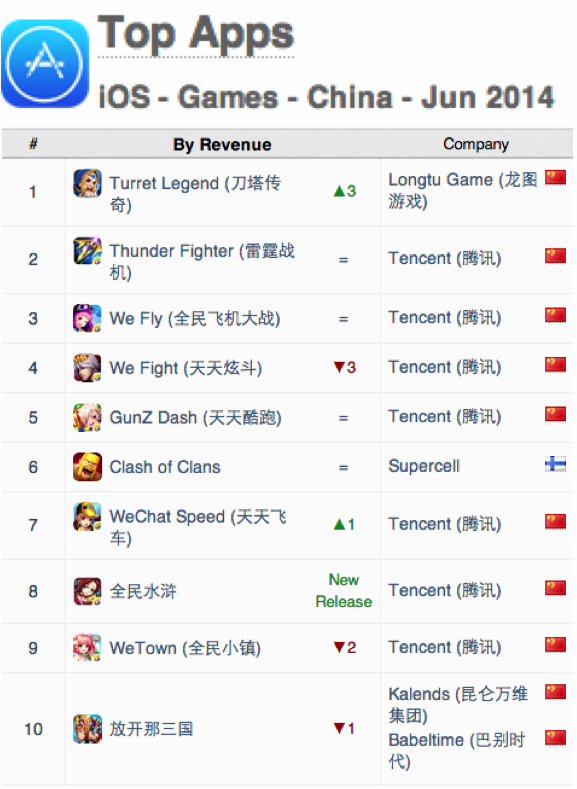 While Longtu Game’s Turret Legend (刀塔传奇) managed to snag the top spot from Tencent, the Chinese mobile titan still retained seven out of the June Top 10 iOS games by revenue. Their portfolio of games in the Top 10 was bolstered by new release Water Margin (全民水浒), a strategy card game based on one of ancient China’s greatest novels. Water Margin features Chinese folklore heroes, a rich storyline and various game modes. 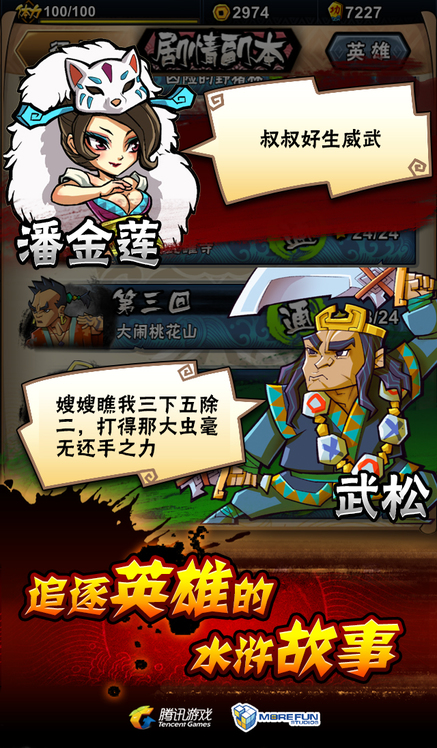 Water Margin quickly broke into the Top 5 overall grossing apps in China, finishing as the #8 ranked game in iOS revenue for the entire month despite being released in the middle of June. With Tencent’s broad distribution platform and a continued presence in the Top 10 in June, Water Margin looks like it has what it takes to stick around. 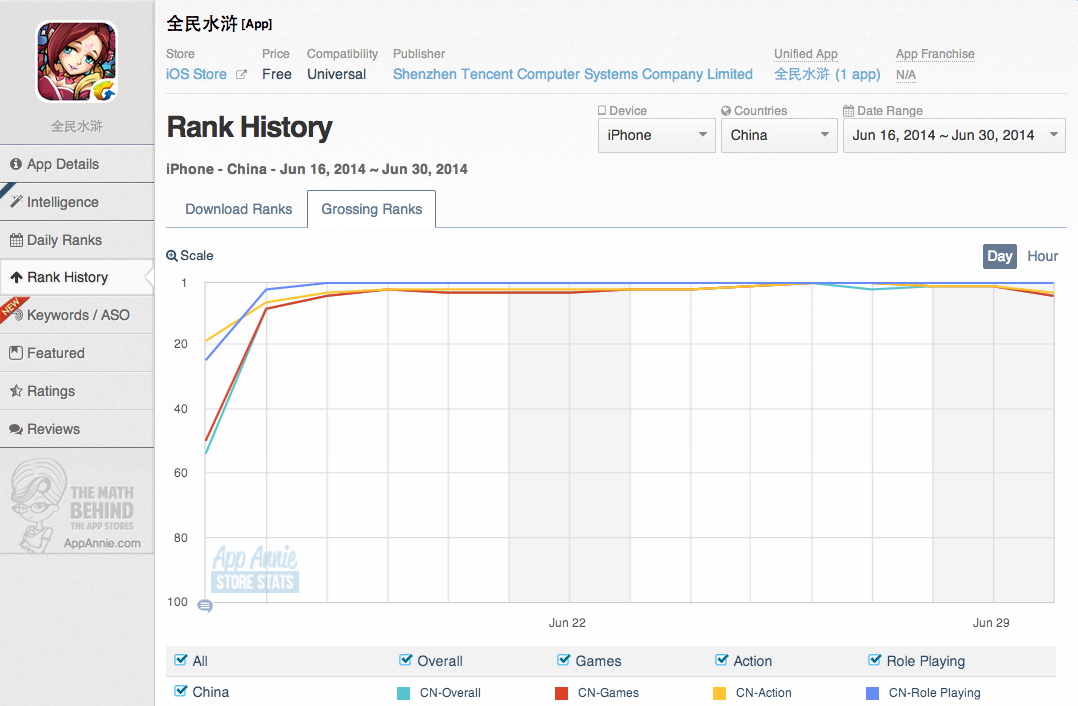 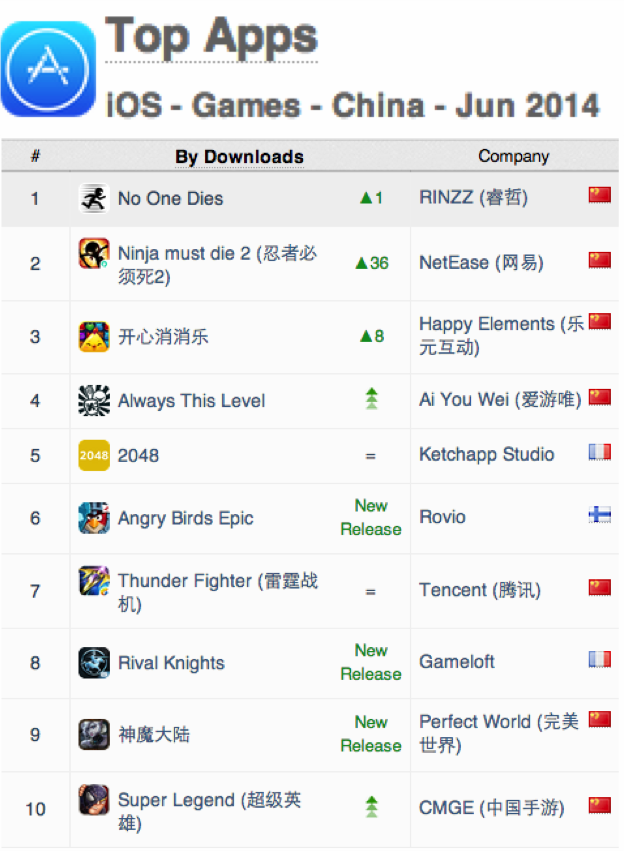 It was a coup in China’s iOS Top 10 games downloads for June, with seven new entrants moving into the Top 10. Only RINZZ’s endless runner No One Dies, Ketchapp’s number puzzle hit 2048, and Tencent’s popular galactic RPG shooter Thunder Fighter (雷霆战机) carried over from May’s Top 10.

Of the four previously released apps that made it into the June Top 10, NetEase’s Ninja Must Die 2 (忍者必须死2)finished the highest at #2, featuring vivid graphics and special power-ups. Happy Elements (开心消消乐) utilized catchy tunes with puzzle-matching gameplay to jump eight spots into #3, while out-of-the-box strategy game Always This Level (只此一关) leapt over 100 slots in a month. Always This Level features hand-drawn scenarios that require users to come up with inventive solutions to various challenges.

Turret Legend Launches Its Way to #1

Turret Legend (刀塔传奇) from LongTu Games (龙图游戏) rose three spots from May 2014 and ended June 2014 as the #1 iOS game by revenue in China, leapfrogging Tencent veterans Thunder Fighter (雷霆战机)and We Fly (全民飞机大战). Turret Legend is a unique spin on the classic card game genre featuring upgradeable hero classes and multiplayer guilds. It also boasts 43 million players across all platforms, an impressive number considering it was released exclusively in China at the end of February 2014. 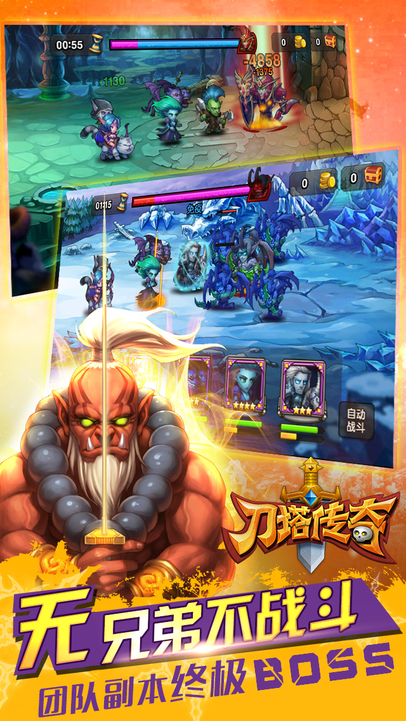 Turret Legend has had an impressive and sustained run to the top of the iOS grossing charts, breaking into the Top 10 early March and maintaining a gradual rise over the past four months. The game’s growing success is what moved Longtu ahead of Supercell into the #2 spot of the Top 10 game publishers by monthly revenue in China. 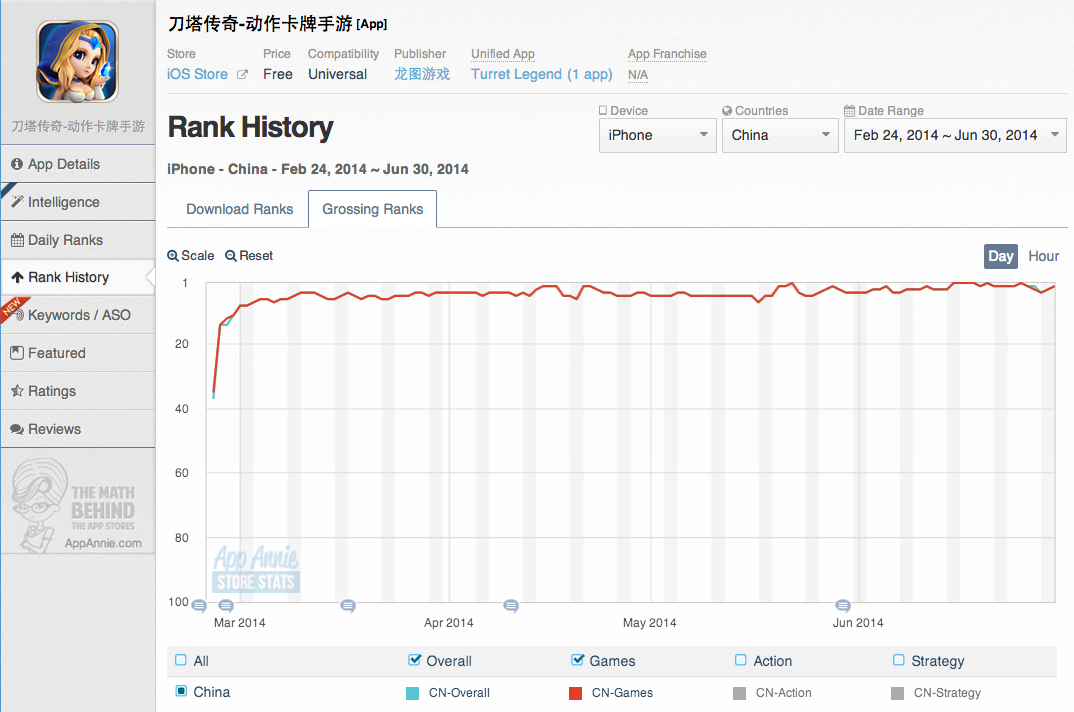 Turret Legend had a remarkably consistent rise to the top of China’s grossing ranks.

China’s June iOS Top 10 Games are dominated by domestic publishers. Three games published by foreign companies made it onto the top download lists: 2048, Angry Birds Epic and Rival Knights, but only Clash of Clans and its publisher Supercell ranked in the Top 10 for revenue for games and publishers, respectively.

Since releasing in China nearly two years ago, Clash of Clans has regularly stayed in China’s iOS Top 10 grossing games despite the numerous challenges from large and independent publishers, both domestic and foreign. 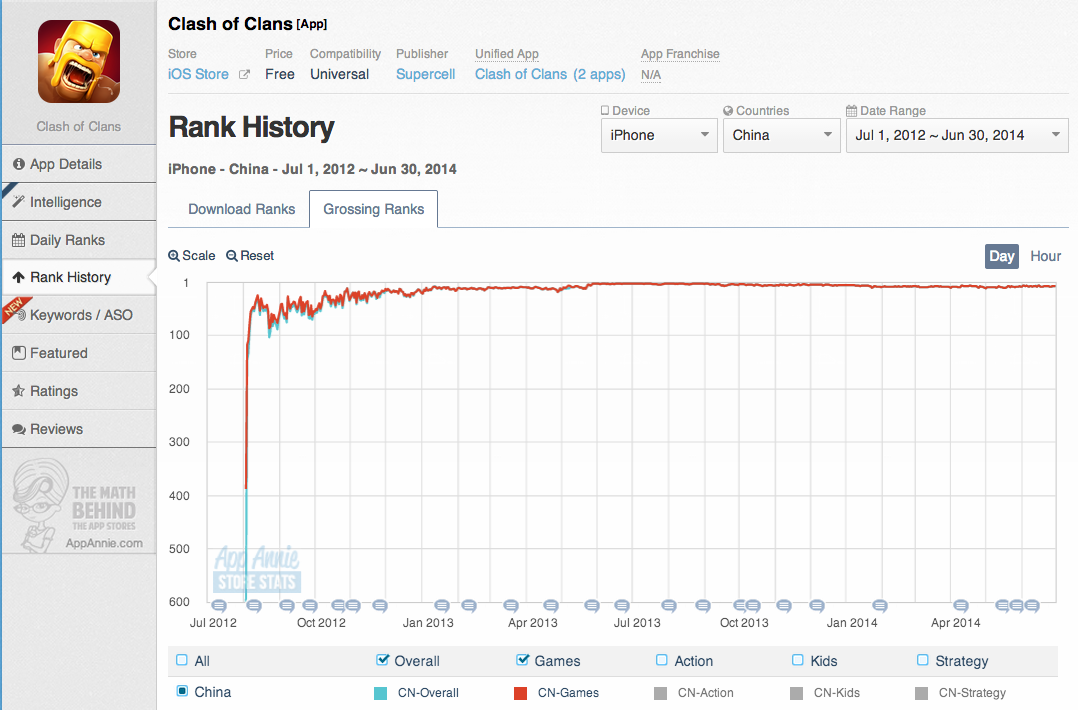 Clash of Clans has persistently maintained a top rank in China for iOS game revenue.

Supercell has enjoyed consistent worldwide success, ending June 2014 as the #1 ranked iOS game publisher by revenue. Having established their foothold in China, it’ll be interesting to see if Supercell can boost Clash of Clans into the China iOS Top 5 grossing games. 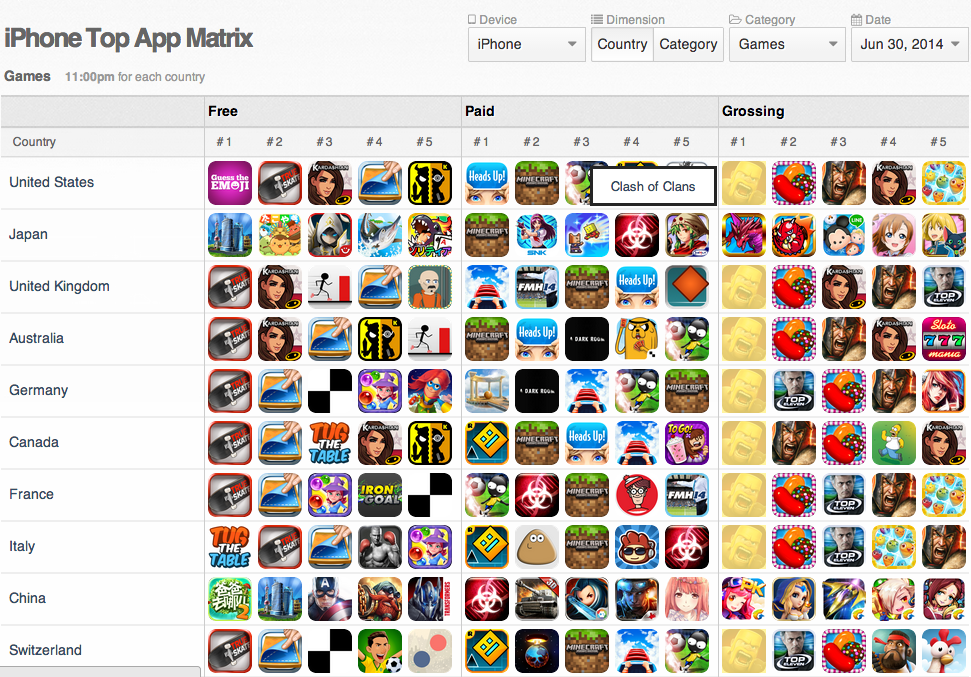 Clash of Clans already occupies the top spot for most major countries; is China next?

CMGE Lands in Top 10 on Shoulders of Super Legend

Publisher CMGE (中国手游) rose 36 spots to #8 in the iOS Top 10 publishers by monthly revenue due in part to Super Legend (超级英雄), their addition to the immensely popular strategy card genre. Players can choose from an array of famous superheroes that span multiple comic book and animated universes. While Super Legend didn’t crack the Top 10, it immediately made an impact upon releasing mid-June, appearing daily in the Top 15 iPhone revenue ranks for the rest of June.