France is home to some of the world’s most prominent mobile publishers, including Gameloft, Ubisoft and Deezer. It is also currently in the top 10 app markets by combined iOS and Google Play revenue, and exhibits ample potential for growth as Europe’s  second largest economy by GDP. 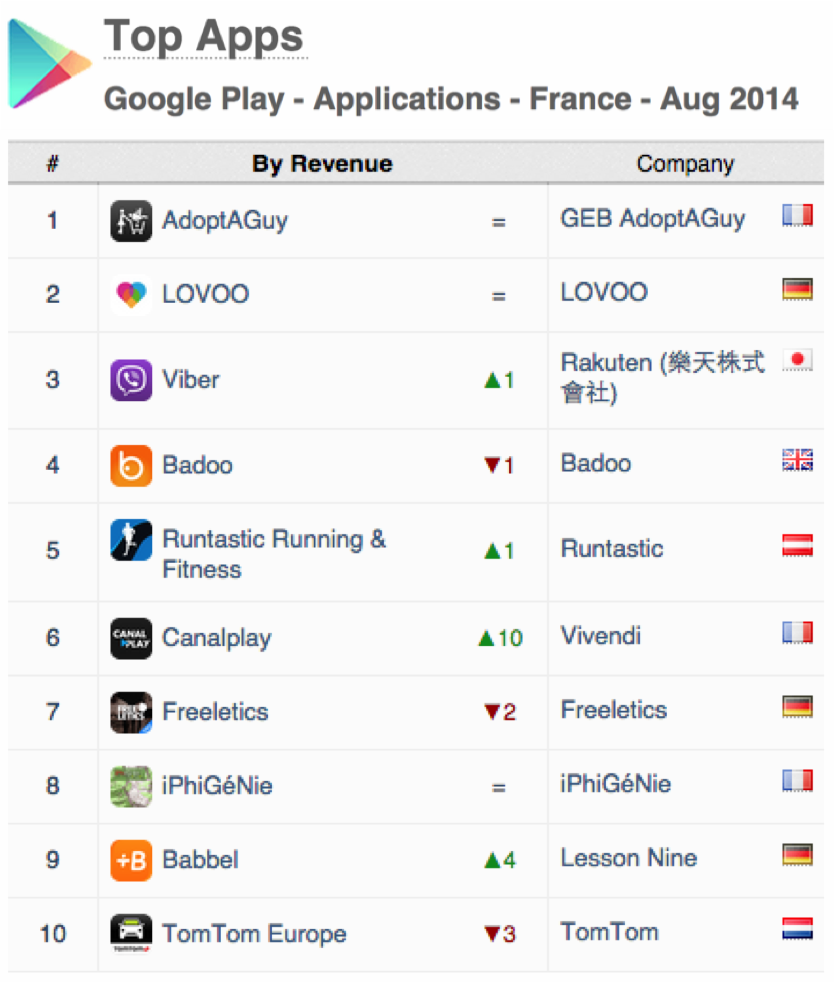 Health and fitness are hot topics in the app world, particularly in combination with wearable devices. In August, Runtastic saw Google Play revenue gains for its Runtastic Running & Fitness GPS-based fitness tracking app. In contrast to the accelerating trend of freemium business models, the majority of the app’s revenue in France came from the Pro paid version, rather than the free version with in-app purchases. Runtastic Running & Fitness features integration with Android Wear to take advantage of the incoming wave of wearable devices. Runtastic also launched its own fitness watch, Runtastic Orbit, in August to boost its presence in the fitness market. 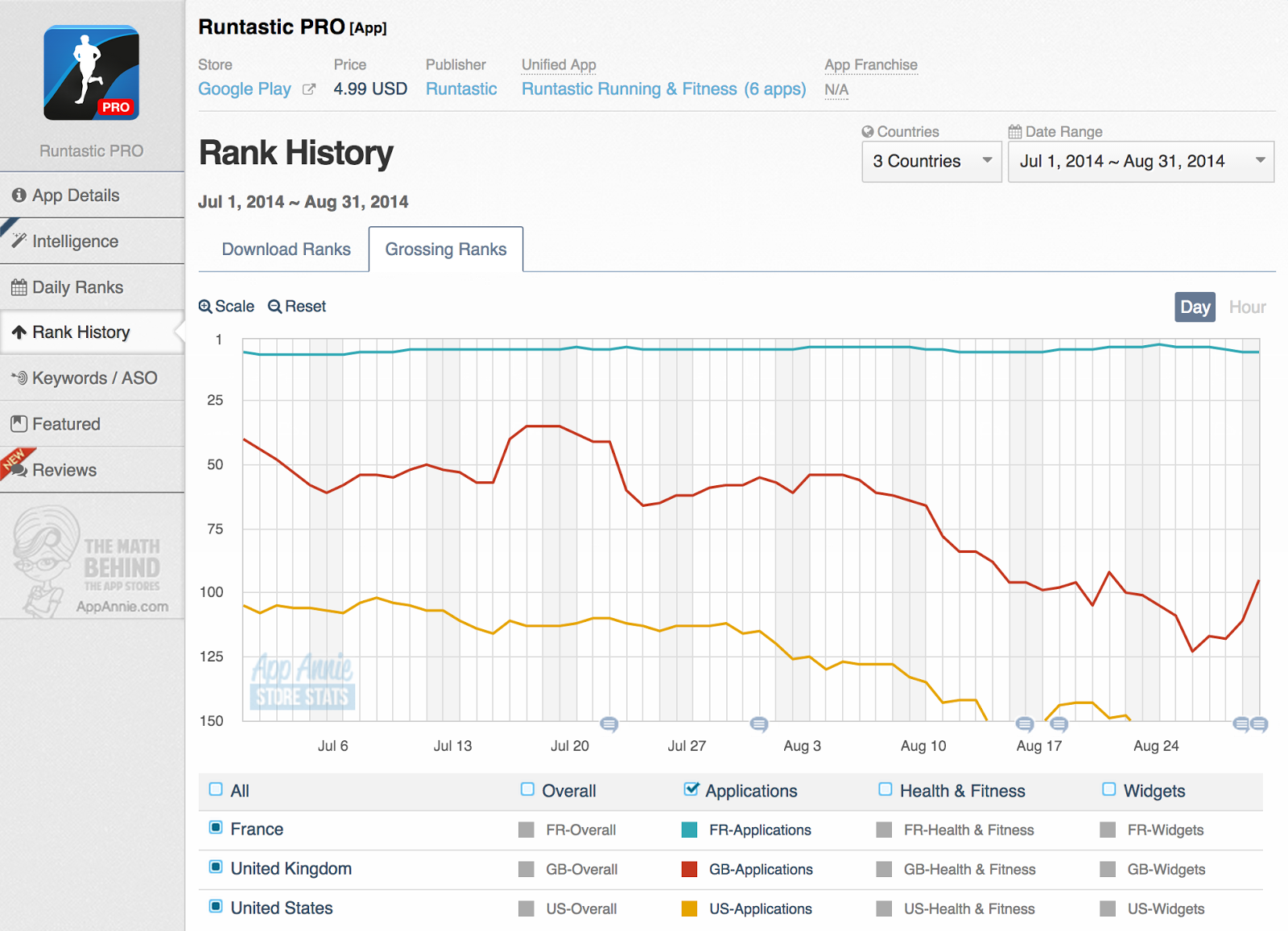 Runtastic’s grossing rank remains notably higher in France than in other major markets such as the United States and United Kingdom.

Runtastic wasn’t the only fitness publisher performing well in Google Play in France this August. Freeletics, another app generating revenue from paid downloads, claimed a spot within the top 10 grossing apps outside of games. The app provides video tutorials for high-intensity bodyweight workouts, along with personal tracking and gamification through social leaderboards. 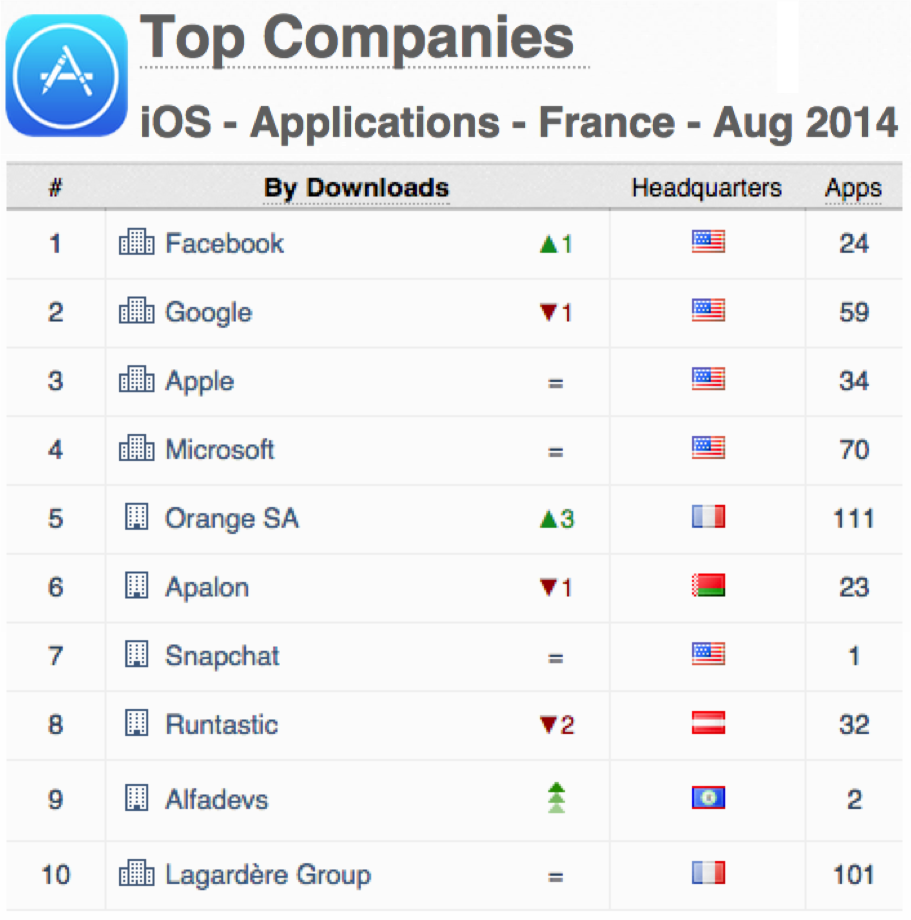 August saw French telecom service provider and app publisher Orange SA climb the iOS download ranks outside of games, primarily from its app Ligue 1. The app brings live video streaming of the top-tier French football league to users, and was updated in early August to remove restrictions on other carriers for the 2014-2015 season. The update coincided with the first week of matches, and resulted in a big rank jump in downloads. The app monetizes through in-app purchases of single matches and full season subscriptions. 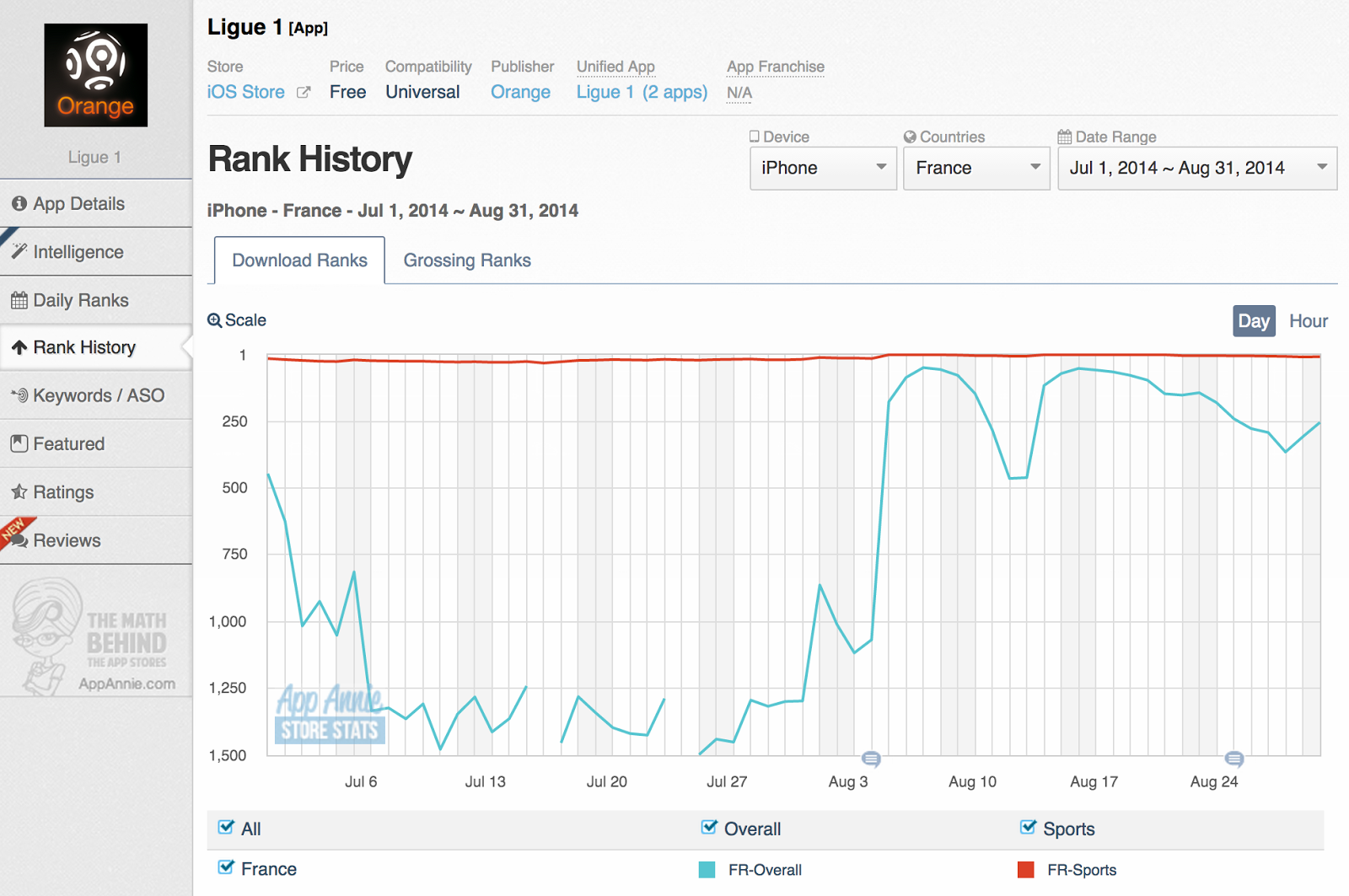 Ligue 1 leapt up the download ranks as the 2014-2015 football season got underway in France.

Another app that made significant gains from video subscriptions was Canalplay, which saw its rank in monthly Google Play revenue rise notably. The app offers on-demand streaming and downloads of a wide range of movies and television shows. Canalplay has been rising steadily in the grossing ranks since it launched in late June, supported by an extensive television advertising campaign. The latest advertisement in this campaign launched in August, and appears to have helped grow app revenue further. The gains are good news for publisher Vivendi, making moves in the market before the high-profile launch of Netflix in France. 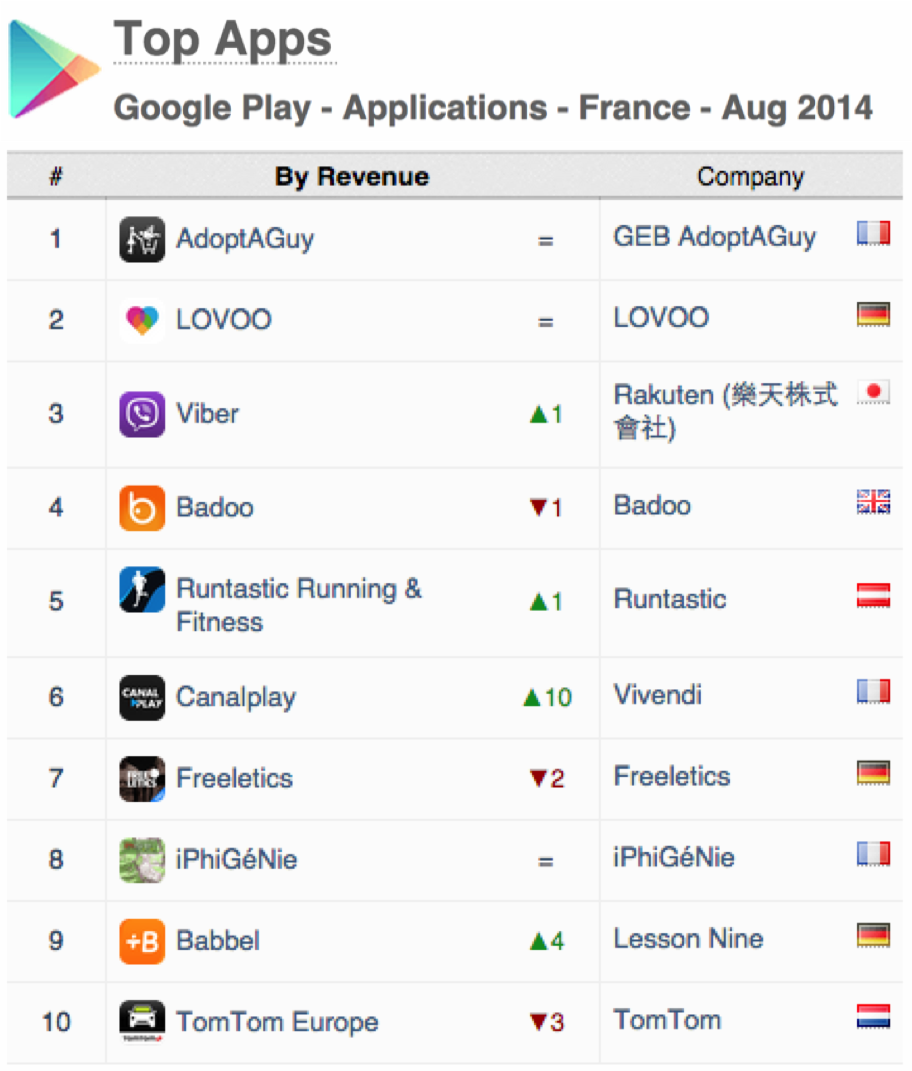 Education is a rapidly emerging sector of the app economy, and high-profile coverage for apps such as Edmodo, Remind and Duolingo are helping accelerate this growth. In France, language-learning app Babbel made significant gains in Google Play revenue in August. The app monetizes through recurring subscriptions available as in-app purchases - a business model generally appears to be gaining considerable traction among apps outside of games. In addition to the primary Babbel app for multiple languages, publisher Lesson Nine also offers a range of unbundled apps for learning individual languages. In August, Learn Spanish with Babbel saw considerable growth in Google Play revenue in France, pushing Lesson Nine further up the publisher revenue charts. 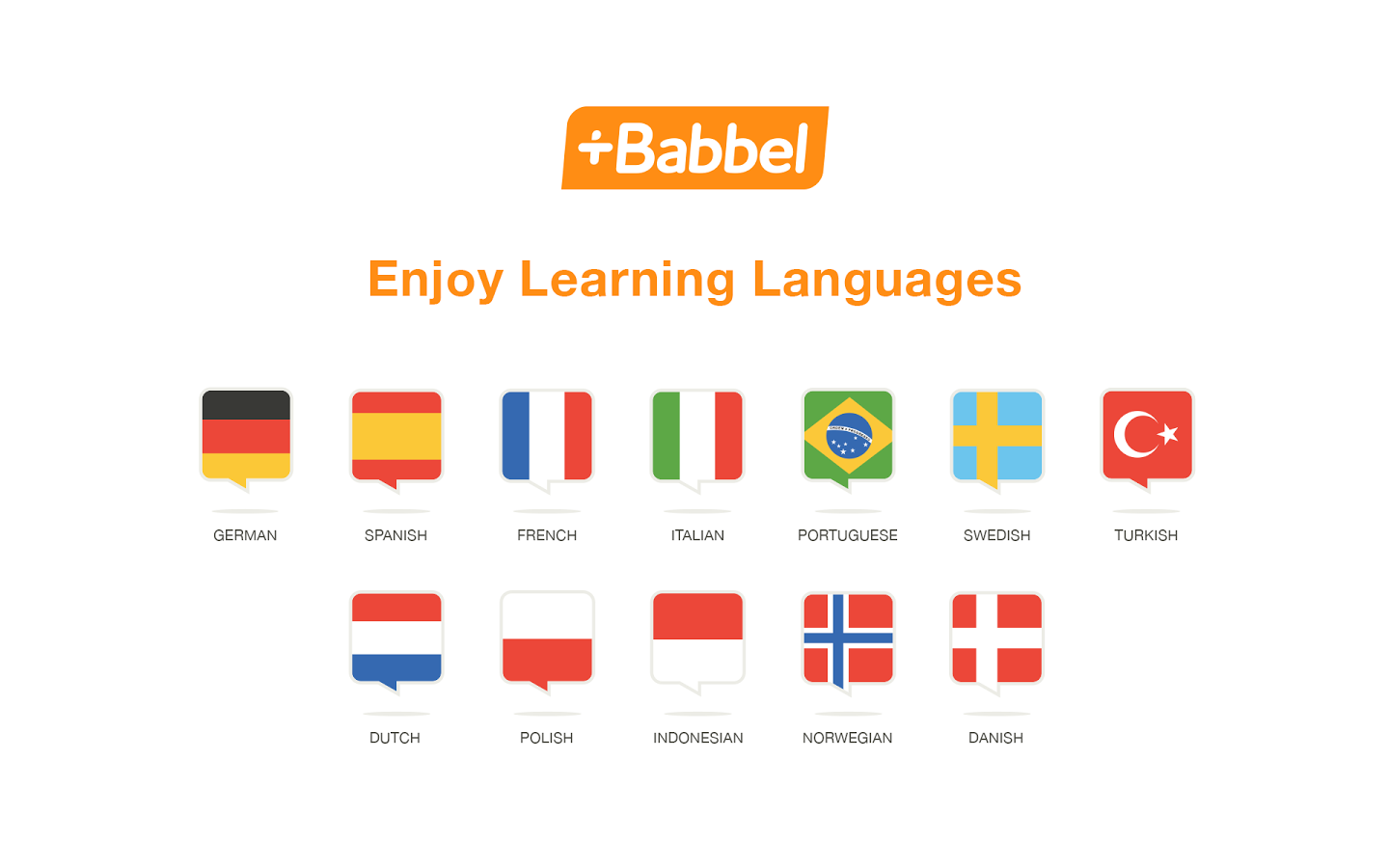 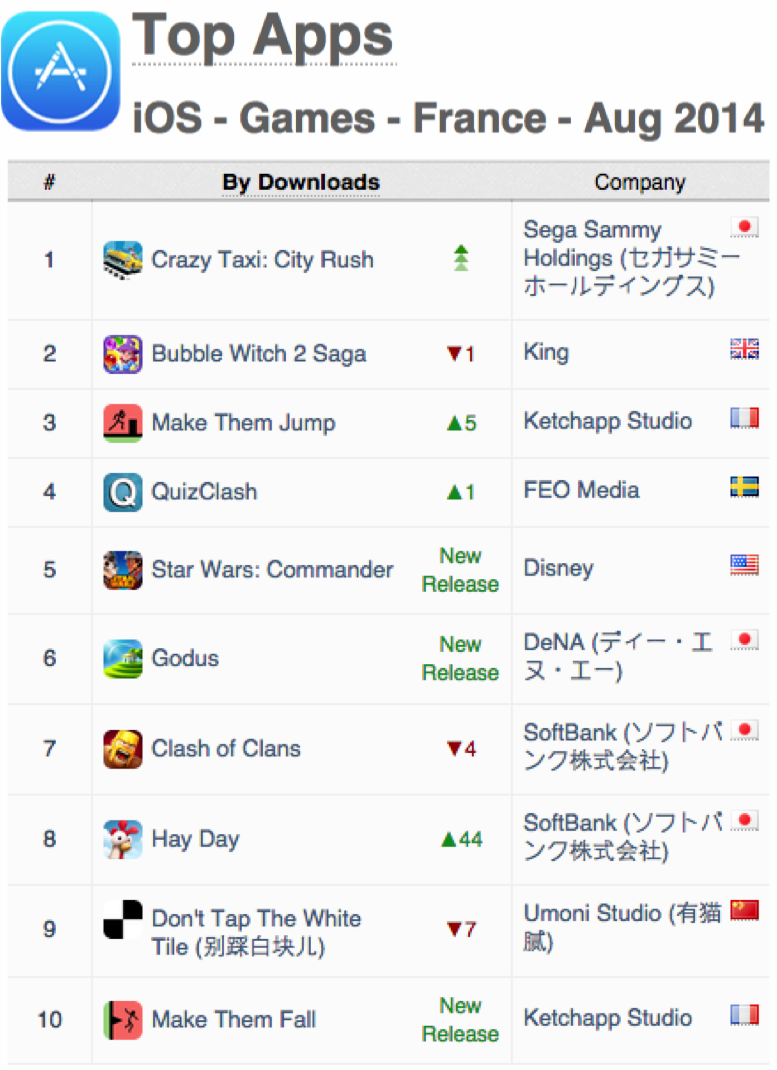 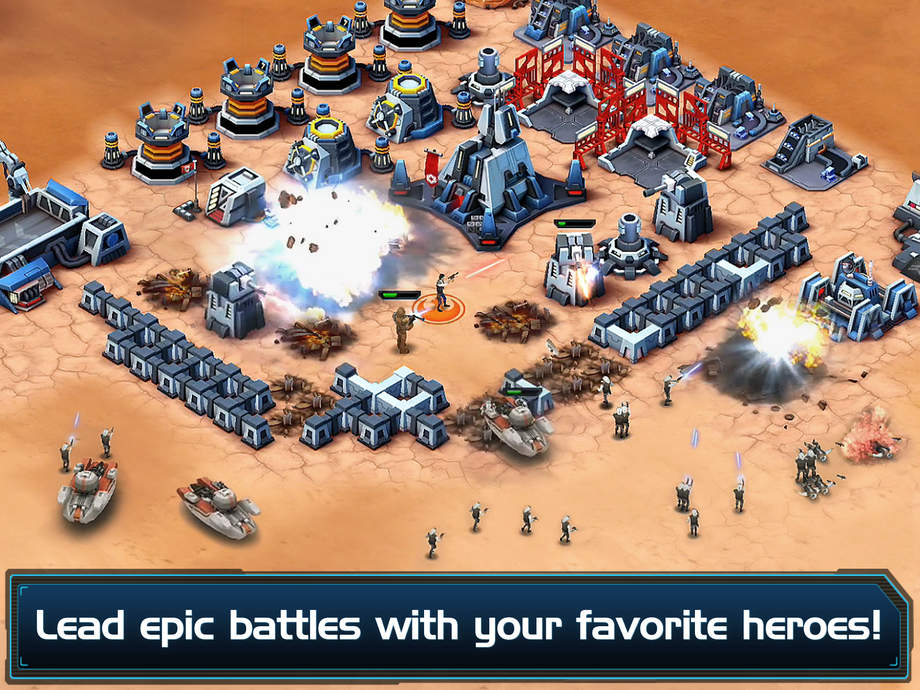 Both iOS and Google Play in France are notable for the number of dating apps in the top grossing ranks outside of games. Dating apps occupied three of the top five positions on both iOS and Google Play. However, it was local favorite AdoptAGuy (AdoptUnMec) that came out on top for both stores in August. The app features a unique, female-focused twist on dating apps that has helped distinguish it from competitors in France.

Shazam Readies For an iOS Boost

France has been an important market for Shazam for a long time, and August showed further gains for the publisher in combined iOS and Google Play downloads. The rise came as Shazam passed 100 million monthly active users, and is preparing for further growth as Apple integrates it into iOS 8. Shazam is now leveraging this extensive and growing mobile presence with a sales platform for television advertisers. Companies can include a Shazam call to action, taking advantage of mobile devices as second screens for advertising and increasing engagement with their commercials.

Ketchapp Studio has churned out a number of worldwide hits in recent months, including 2048 and The Line. August continued that momentum for Ketchapp Studio on iOS in France. Make Them Jump, an endless runner with gameplay similar to No One Dies, climbed further up the charts, reaching the top three by monthly downloads. In addition, the publisher released sequel Make Them Fall in August, which also flew into the top 10. Instead of avoiding oncoming side-scrolling obstacles, Make Them Fall rotates gameplay by 90 degrees and sees players trying to save multiple characters from obstacles approaching from below.For those of you who are also looking for an update on markets outside of France, check the

For those of you who are also looking for an update on markets outside of France, check the App Annie Index reports for August. To keep up-to-date with all the changes at the top of the app and publisher charts, check out the complete set of App Annie Index tables.