INFOGRAPHIC: iOS and Google Play locked in a Game of Phones

Despite the emergence of Google Play, iOS revenue stays well ahead.

The battle for supremacy in the app store ecosystem between Apple and Google rages on, and we've decided to give you an update on the state of affairs between the two dominant app stores. Keep reading to see where the battles are being fought. Android's proliferation as a platform is widespread news, but has Google Play been able to gain ground on iOS as the main source of commerce for app publishers?

China and Japan make up 25% of iOS's total downloads

The data shows clearly that East Asia's appetite for the iPhone and iPad is translating well into sheer download volume. Two of the top three countries by downloads are now Asian, with Western European countries lagging behind in both volume and growth. We've already documented Asia's prolific download growth in our last infographic.

While Android handset growth in Asia has been well reported, it’s clear that the Google Play store has yet to establish itself as the dominant Android app store in Asia. In China and Korea, Google Play is not only competing with iOS, but faces stiff competition from regional app stores operated by local mobile operators and other platform owners. How will Apple and Google respond to these trends in the fastest-growing app store region in the world?

US, UK and Japan generate more revenue than the rest of the world

If you're a publisher that's looking to generate global revenue scale, then you can't ignore these three countries. Both platforms have these heavy hitters in their top three. The US, UK and Japan have firmly established themselves as key revenue centers, accounting for over 60% of global revenue across both platforms. We’ve seen major moves by the big Japanese publishers such as GREE and DeNA to make strides in the international stage. We’ve also seen many Western publishers attempt to enter the Japanese app store market with localized apps to significant difficulty. App stores are bringing about the consolidation of global digital content, and the race between Eastern and Western publishers to dominate the globe will be an interesting contest.

The growth rates seen in this section of the infographic are taken from the first four months of 2012, and from that perspective it looks like everyone and their mother in Rio got an Android phone for Christmas and has been downloading apps on Google Play since. 88% growth year-to-date more than triples the growth rate of the nearest country on either platform. Conversely, Brazil has not seen the same stellar performance in iOS. A key factor perhaps being the import tax levied by the Brazilian government, pricing the iPhone and iPad out of people’s disposable incomes. There are of course talks of Apple setting up a factory in Brazil to manufacture devices locally which would of course solve that hardware sales problem and allow their app store to flourish in that country.

Russia’s growth rate across Google Play and iOS is also noticeable, and whilst much has been made of the rise of China, it seems the next wave could be the other developing countries in the BRIC region. Within this, India is not yet significant with the country too early to be a smartphone force to be reckoned….for now. 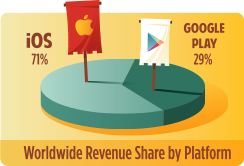 It’s very clear from the data and from developer feedback that Google Play is still playing catch-up in the revenue game. iOS global revenue across 35 comparable countries outperforms Google Play by a factor of 71 to 29. Whilst Android wins the war in handset penetration, this has not yet translated to revenues generated for Google Play.

iOS and Google Play revenues growing at the same rate 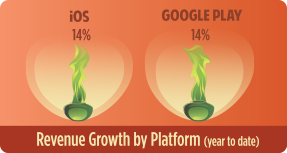 According to the first four months of 2012 revenue data, iOS and Google Play are growing at the same pace. Therefore there is no catch-up pace from Google right now, and what makes the Google I/O conference that much more interesting is to see their response to this well-reported trend. App developers worldwide have been calling out for numerous changes to be made to the platform – if Google Play wants to start catching up in 2012, then now is a great time to make a big announcement. We look forward with eager eyes to next week’s conference. And we’ll be sure to provide more commentary and high quality market data to you in the coming weeks and months.