Gen Z interacts entirely differently with people and businesses than older demographic groups. The question remains — will this shape the future of commerce?

Gen Z is a generation raised in a world where smartphones were already widespread. From childhood, mobile was a powerful tool and would play an essential part in shaping their lives, from dating to working to socializing.

Some studies show that 96% of Gen Z already own a smartphone. They use smartphones in every aspect of their lives: to communicate, shop, bank, consume news, and more. In our State of Mobile 2019 Report, we found that there are stark differences in how Gen Z members interact and engage on mobile than older generations — a difference that has dramatic implications for how businesses succeed.

Let’s take a closer look. Our report found that Gen Z engages more on average with their most used non-gaming apps than those aged 25 and older. Specifically, Gen Z spends 20% more time and engages with their most-used apps 30% more often than the rest of the population. In other words, apps that attract Gen Z can expect higher usage and engagement rates from this group. However, this goes both ways. Businesses who fail to leverage a streamlined user experience and deliver substantial value in their app are poised to lose out with this generation. In a time when brand loyalty is increasingly fragmented, capturing a lifetime customer through mobile is paramount.

There are stark differences in how Gen Z members interact and engage on mobile than older generations — a difference that has dramatic implications for how businesses succeed.

One of our earlier posts addressed emerging and mature markets, and how more mature markets see higher engagement rates. Clearly, Gen Z is a mature demographic group — likely due to the early exposure they’ve had to mobile. They’ve selected apps they like the most and will correspondingly spend more time in these than other demographic groups. On the gaming front, though, it’s the opposite: older age groups spend 75% more time each month in their most used games and access them 50% more often than Gen Z. 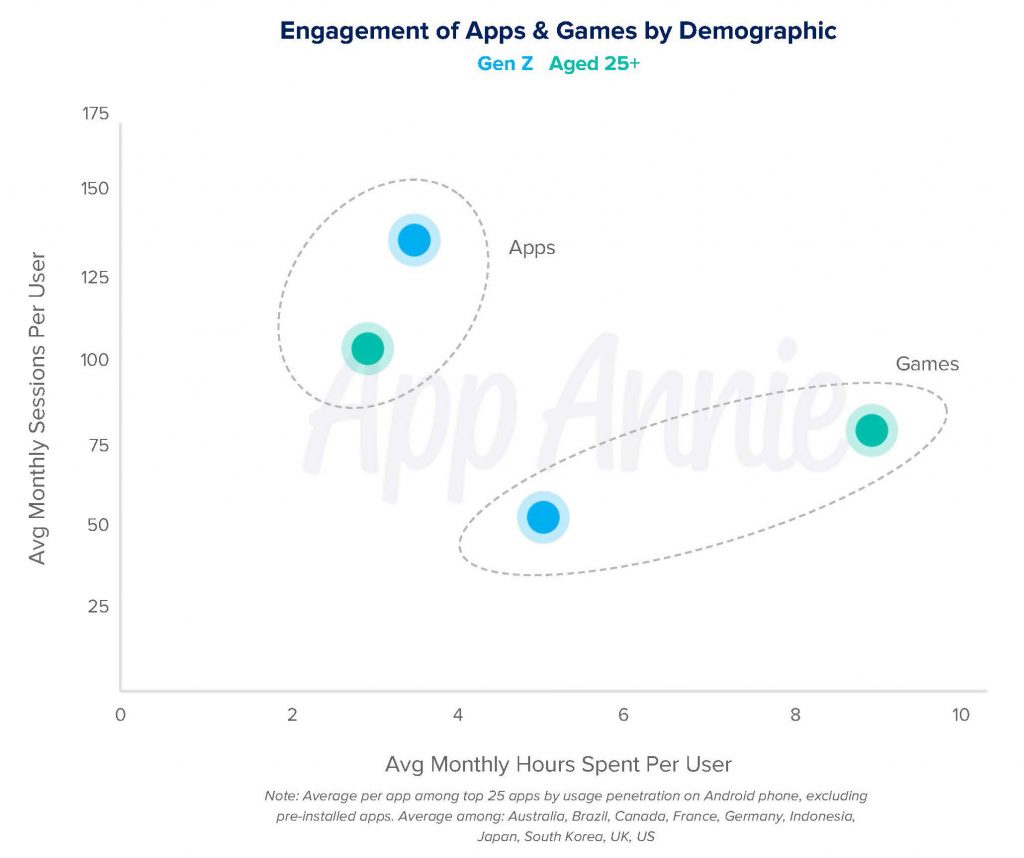 For businesses who view millennials as the key driver of business value, this attitude is risky. The fact is that Gen Z’s habits carry massive implications for companies across all industries. Gen Z members are entering the workforce, gaining more spending power and will hold more power over worldwide markets in the coming years and decades. By 2020, they’ll account for 40% of all consumers. Mobile is a not only crucial for any business hoping to attract this demographic, it’s crucial for any business that wants to survive long term.

In a time when brand loyalty is increasingly fragmented, capturing a lifetime customer through mobile is paramount.

The good news is, targeting this demographic is already a viable business strategy: some companies have been built on the backs of Gen Z. Take TikTok (part of ByteDance), for example, the short form mobile video platform that went viral in 2018. The company ranked 4th worldwide in downloads on iOS and Google Play combined in 2018, and #1 in China. As of January 2019, it’s ranked 35th in top grossing apps in the US.

Whether it’s through TikTok, news apps or Snapchat, video is vital to Generation Z. It’s their natural way of consuming information. One study found that the average member of Gen Z watches 68 videos per day, or more than 4 for every hour they’re awake. 50% of Gen Z says that YouTube is the one platform they can’t live without. Globally, YouTube accounted for 9 of every 10 minutes spent in the top 5 video streaming apps in 2018. Businesses need not only a mobile strategy to entice Gen Z, they need a comprehensive video strategy as well — particularly for attracting users to its apps.

Furthermore, businesses need to be savvy about how they engage with Gen Z. Gen Z is smarter than previous generations on smartphones. Native advertising or influencer marketing could be less effective on Gen Z than it was on say, Baby Boomers. Mobile is an appendage to their person and Gen Zers can sniff out inauthenticness.

The average member of Gen Z watches 68 videos per day, or more than 4 for every hour they’re awake.

In fact, McKinsey refers to them as “True Gen,” as they often try to get to a source of truth about a company: “About 65 percent try to learn the origins of anything they buy — where it is made, what it is made from, and how it is made. About 80 percent refuse to buy goods from companies involved in scandals,” a 2018 McKinsey report states.

As Gen Z continues to come into their own and take over market share, the members of this group may favor the companies that are honest, authentic and engage effectively through video. But they’re certain to favor those that are mobile-first.