App Annie is excited to announce the launch of the Germany App Annie Index. The App Annie Index is a well-established resource providing mobile industry insights and can help app publishers with their business strategy. Looking at the top countries in mobile during August, Germany ranked #6 by mobile app revenue from both iOS and Google Play. With this Germany-focused report, we give you an in-depth look at mobile trends in one of Europe’s largest economies, providing more local insights for your mobile strategy.

We also launched the France App Annie Index this month, and as we continue to look into more countries in detail, all local Index charts will be updated on a monthly basis going forward. To find out about mobile trends outside of Germany, see the full Index charts for August, including newly added charts for other countries. 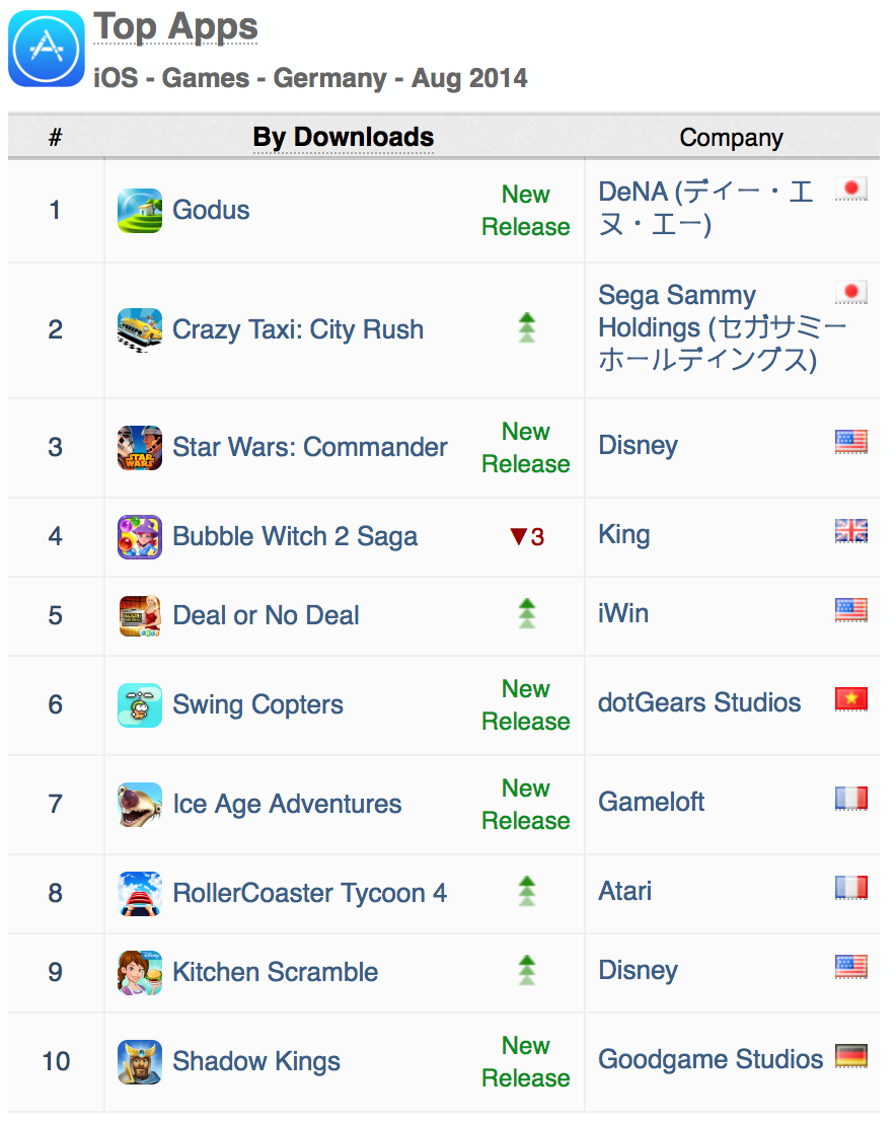 Starting with the games section, DeNA had a strong impact on August’s iOS download rankings in Germany with its new release, Godus. 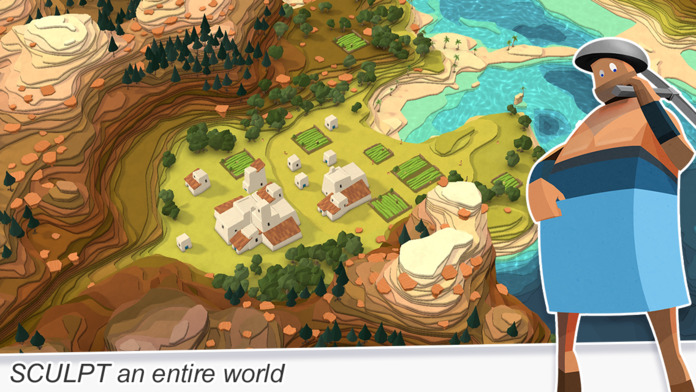 Players explore and create their own new worlds in god game Godus.

Released by 22Cans studio, Godus was the brainchild of famed Peter Molyneux, who is credited with the creation of the god game genre. His studio 22Cans raised just over £526,000 on crowdfunding platform Kickstarter before joining forces with DeNA to bestow Godus upon iOS devices. Renowned for designing popular PC and console games, Molyneux’s decision to collaborate with DeNA signals the growing importance of large mobile distribution networks. The combined efforts resulted in the game ranking #1 in Germany’s August iOS download charts, as well as entering the worldwide top 10 games download charts.

Star Wars: Commander saw overwhelmingly positive reviews in Germany, with over 85% of reviews 4 stars or above.

Just as we saw in other countries, Germans also took note of Disney’s Kitchen Scramble. While the kitchen-themed arcade and puzzle game ranked a little lower in Germany at first, it quickly caught up with comparable rankings as in the United States during August. A reason behind this rise might be the July 31 update, where Disney added German translations, among other languages. Securing ranks within the top 10, these two games were also the major contributors in Disney’s higher rank in the top company charts for Germany in August for iOS. 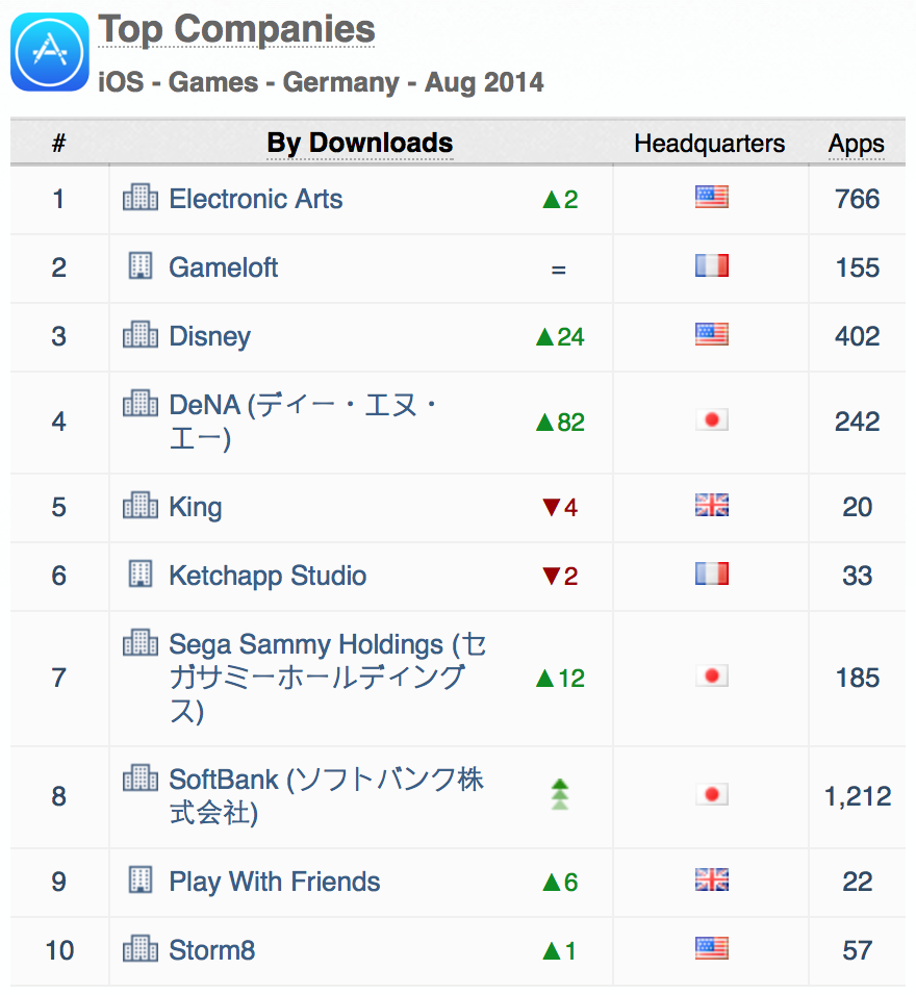 Glancing at Germany's Overall charts above, we see a high concentration of gaming companies. A look at the Top Apps charts outside of games, however, proves that Germans don’t just play games on their mobile phones. 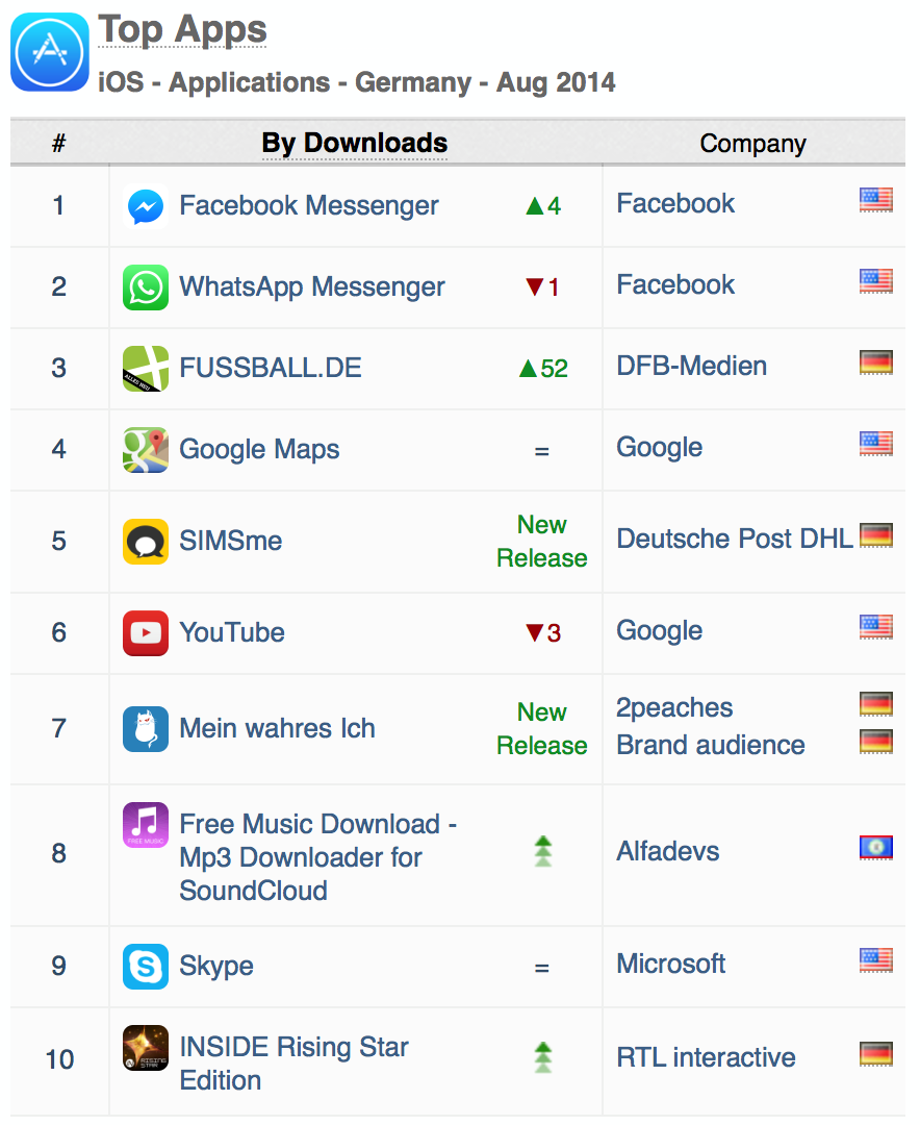 One of the most impressive movers in August was FUSSBALL.DE, moving up 52 ranks in the iOS download chart. The app was released just in time for the start of the national soccer season in Germany, providing fans with news, facts and scores for German matches. The app claims to update its users with in-depth information about everything around the latest soccer games in Germany, even including a spotlight for amateur clubs. It also includes interactive features for users, such as uploading photos or videos of a game to share the live experience with other fans. During August, FUSSBALL.DE scored top ranks in the sports category on both iOS and Google Play. 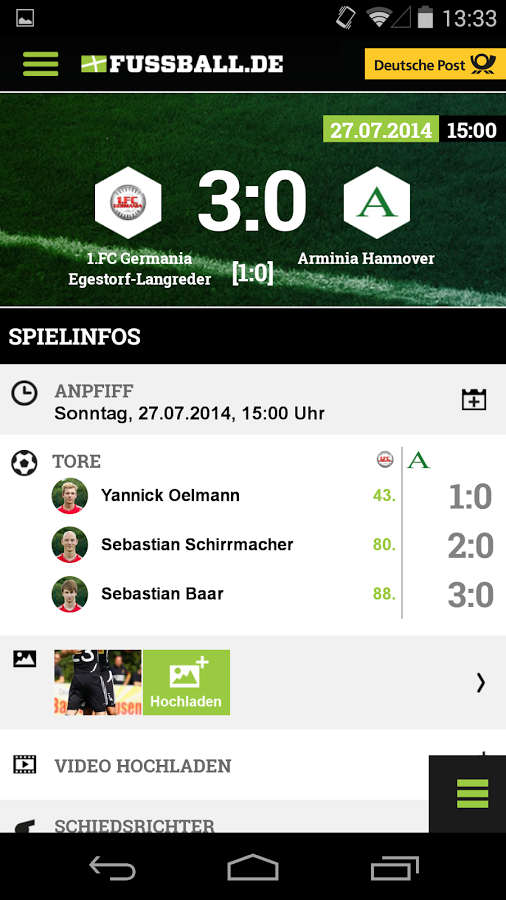 In good company with major social messaging apps such as Facebook Messenger, WhatsApp Messenger and Skype, Deutsche Post DHL, Germany’s major postal and courier service, also entered the messaging app market - or more precisely the secure messaging market. After controversy regarding secure messaging and encryption features, it became clear that particularly in Germany, mobile messaging users are particularly sensitive about surveillance. In this environment, Deutsche Post DHL launched SIMSme – Your secure messenger, which conquered the charts reaching #5 by iOS downloads for apps outside of games. Similar to Snapchat, the German app also offers a self-destruction feature along with real end-to-end encryption. The app generated a substantial amount of downloads on Google Play during August as well. 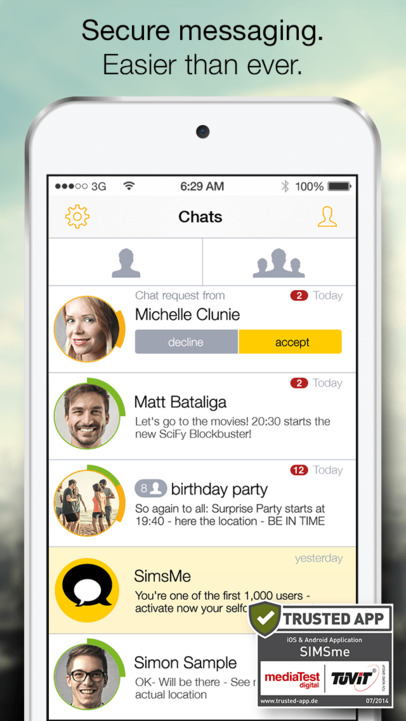 SIMSme launched to a privacy-hungry market on iOS and Google Play in Germany. 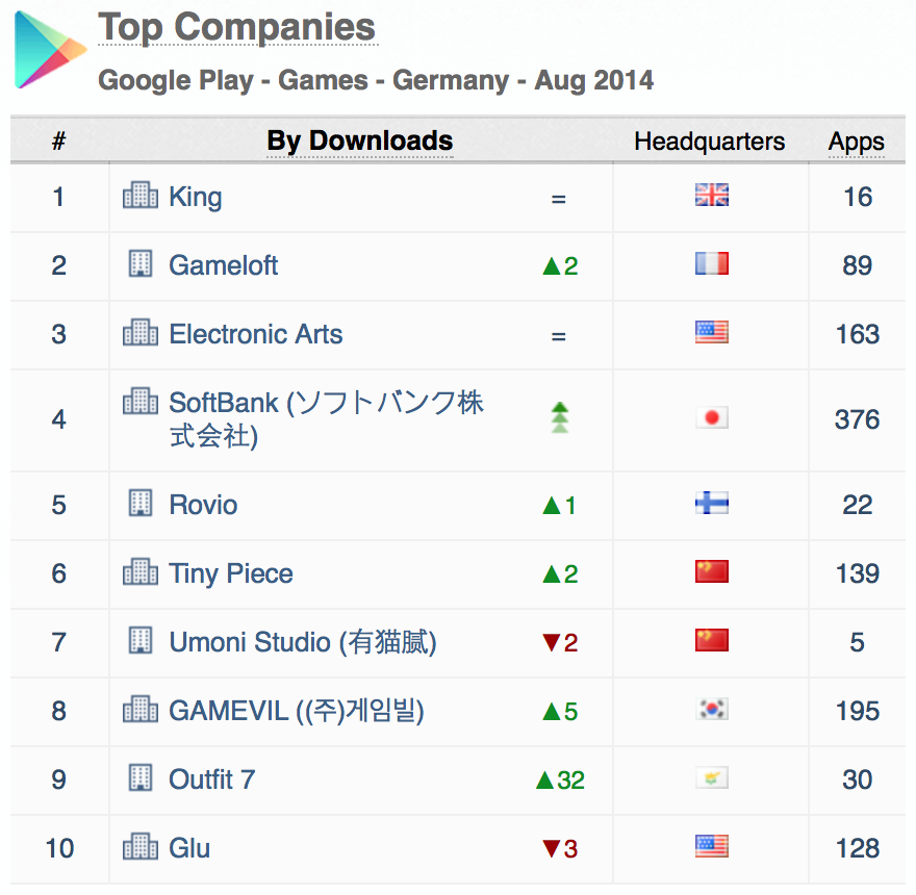 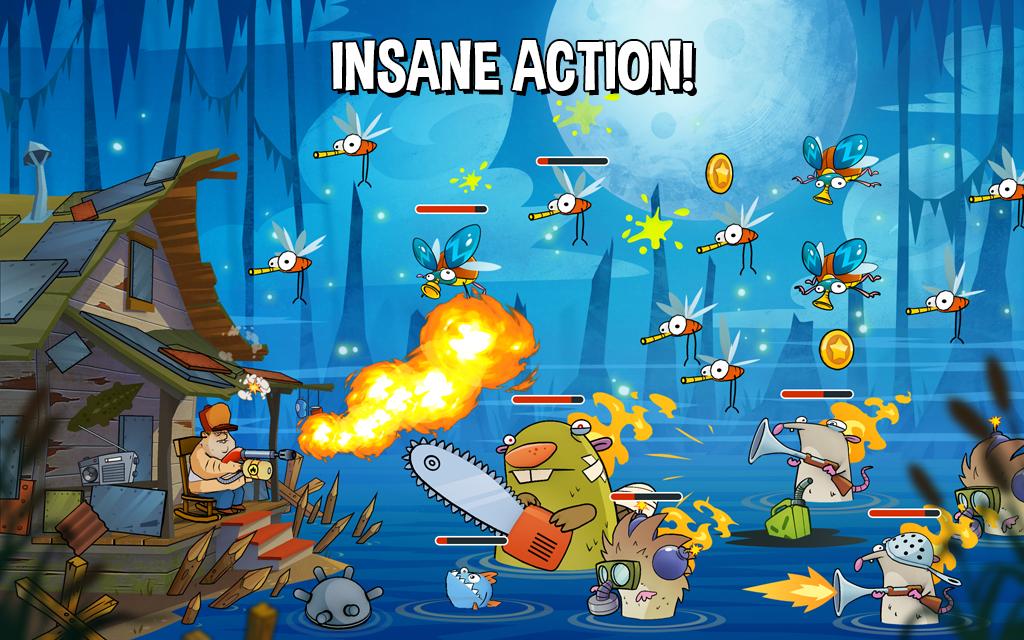 In Swamp Attack, players have to defend a cottage from an onslaught of various swamp creatures.

Swing Copters Touch Down in Germany

Shadow Kings -- By Germans, for Germans

Facing strong international competition, the only German publisher who made it into the August top 10 game download charts in Germany was Goodgame Studios. In addition to the exceptional performance of other simulation games in Germany’s download charts, such as Godus, new release Shadow Kings also received strong support from German simulation game enthusiasts. The demand for the local game was large enough for Shadow Kings to finish the month at #10 by downloads.

For those of you who are also looking for an update on markets outside of Germany, check the Worldwide and France App Annie Index reports. To keep up-to-date with all the changes at the top of the app and publisher charts, check out the complete set of App Annie Index tables.