How Much You Gain From Being Featured on Apple's App Store 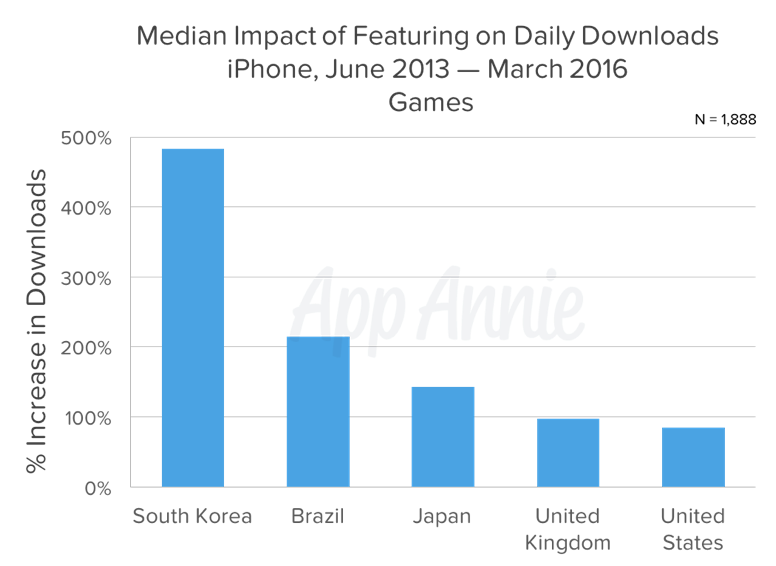 Being featured on the iOS App Store puts your app in the spotlight of a staggering amount of users, many of whom may have never discovered your app on their own. But for all the effort it takes to make your app feature-ready for Apple (which has a list of criteria you need to meet), is the increase worth it? Our App Store Feature Report addresses how being featured affects downloads for apps (both game and non-game) in major app markets.

Using App Annie Intelligence, we looked at how being featured impacted iPhone downloads in five countries at different levels of market maturity: Brazil, Japan, South Korea, the United Kingdom and the United States. As you’d expect, getting featured can have a noticeable impact on app downloads, but we have numbers to back it up: Games experienced the most lift with a median 140% increase, with South Korea’s Games downloads rising by a staggering 500%.

We got a chance to speak with top publishers about how getting featured, even if it came well after an app’s initial launch period, impacted their apps. Here’s what they said:

“While UA can consistently deliver thousands of consistent quality users, a prime featuring placement can drive hundreds of thousands of users in days, creating a compounding velocity and completely shifting the network and product trajectory of an app.” –James Peng, Head of Mobile App Acquisition, The Match Group

“Gameloft is unique by the diversity of games that it brings to the App Store. All our games have very high production values for each and every specific audience we target, enabling us to broaden the ecosystem. When Apple comes to the same conclusion and brings strong featuring support, there is often an exponential effect. We aim to advertise our games at the same time as featuring.” –Baudouin Corman, GM Americas at Gameloft

“Strong featuring doesn’t necessarily ensure the success of a title, but it goes a long way in launching and sustaining a successful app. We believe that great games and great brands are drivers of app store featuring, and we work closely with app store managers to showcase the products and features that their audiences want.” –Chris Heatherly, SVP & GM, Disney Interactive Games

See how much getting featured could affect your app’s growth by downloading our free report above. If you want to learn even more about the effects of app store features, keep an eye on our blog — this is something we’ll be investigating even more in the coming months.