Currently, Japan is the top grossing mobile game market across iOS and Google Play combined. Gamers across the world dig into Japan’s games, and the country’s publishers are seen as innovators in graphics and game design. Japanese publishers continue to reinvent staple game genres, and their companies are thriving as a result.

Following the success of Tokyo Game Show 2014, App Annie is excited to announce the Fall 2014 Japan App Annie Awards for Games. In this report, we look back on the top-performing Japanese games between September 2013 and August 2014. To find out what games are hot in Japan this month, please check out the 2014 August Japan App Annie Index for Games. For more information on top apps and publishers across the globe, see our Worldwide, United States, United Kingdom, China, Germany, France, and Russia rankings for August.

1. The Technology Behind the Awards

The Award: Winners for The Longevity Award were chosen based on how frequently a game appeared in App Annie’s top 5 rankings.

Qualifications: A game must have appeared in App Annie’s top 5 rankings by monthly revenue or downloads in Japan’s Games category on either iOS App Store or Google Play within the 12-month period from September 2013 to August 2014, based on the estimates from App Annie Intelligence.

Significance: This metric focuses on a game’s staying power. Long-term success is the result of solid game design, frequent updates and effective user acquisition and retention strategies. These games usually provide their publishers a solid cash flow. By maintaining and evolving their staple app, a publisher can boost development cost efficiency by focusing on their existing app rather than developing new titles. In addition to the fact that retaining customers is cheaper than acquiring new ones, it is also easier to cross-sell new games to existing customers. 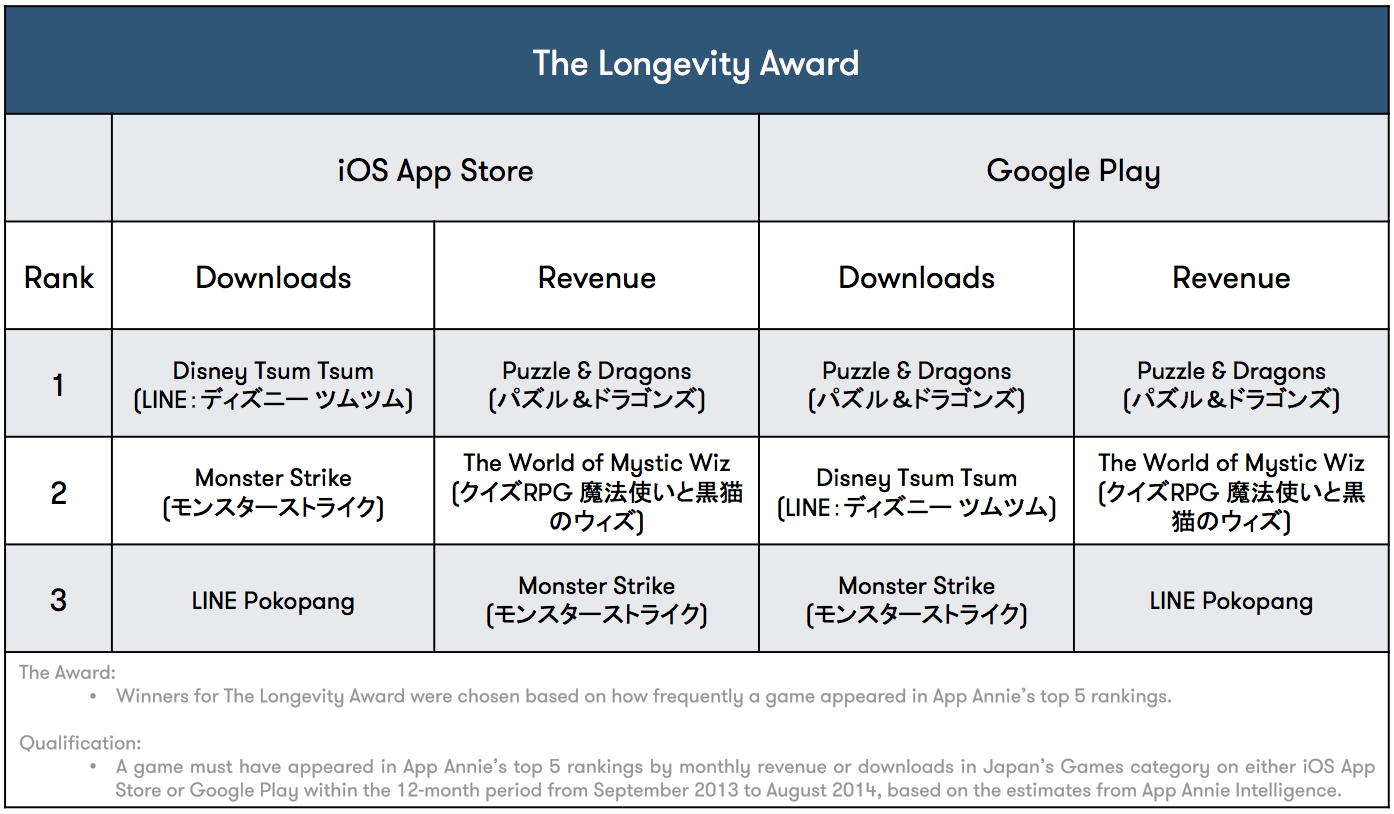 Puzzle & Dragons was crowned champion in 3 Longevity Award categories, while two of LINE’s games are the representatives of content-light casual titles.

Puzzle & Dragons (パズル＆ドラゴンズ) by GungHo Online ranked 12 times among the top 5 earners on both iOS and Google Play, indicating the game is still at the peak of its life cycle over two years after its release. This staple title demonstrated its knack for user acquisition by cracking Google Play's top 5 downloads over 10 times in the past year. Based on this, we expect to see this game in Japan’s Games rankings for many months to come. The only other game that could match this level of dominance is The World of Mystic Wiz (クイズRPG 魔法使いと黒猫のウィズ), COLOPL’s main moneymaker. It has been a top-5 grossing app on iOS for 11 months and Google Play for 12 months.

Puzzle & Dragons launched in February 2012, whereas The World of Mystic Wiz released a year later in March 2013. Both games are considered significant innovations to the mobile gaming market, combining RPG/TCG gameplay with puzzle and casual game elements. The gameplay is tremendously enriched by each games’ storylines, quests, player advancement, monster/pet cultivation and card collection/trading. Regular updates inject more activities for players to consume, which extends each the product’s life cycle. These updates also create more in-app purchase opportunities. Both games enjoyed a first-mover advantage around H2 2012 and H1 2013, pre-empting similar games that emerged in the same time period. Recently, more and more games are innovating by evolving gameplay and the overall user experience. We expect to see these games in the running for the longevity award well into the future.

The Award: Winners for The Fast Mover Award were chosen based on how quickly a game joined Japan’s top 5 by daily grossing or free downloads.

Qualifications: A game must have ranked among the top 5 by monthly revenue or downloads in the Games category of the Japan iPhone App Store or Google Play at least once within the 12-month period from September 2013 to August 2014, based on the estimates from App Annie Intelligence.

Significance: This metric evaluates the ability of a game to quickly attract downloads, which hinges on a number of factors: the brand strength of the game, publisher, scale of the platform or distribution channel, and marketing campaign effectiveness. 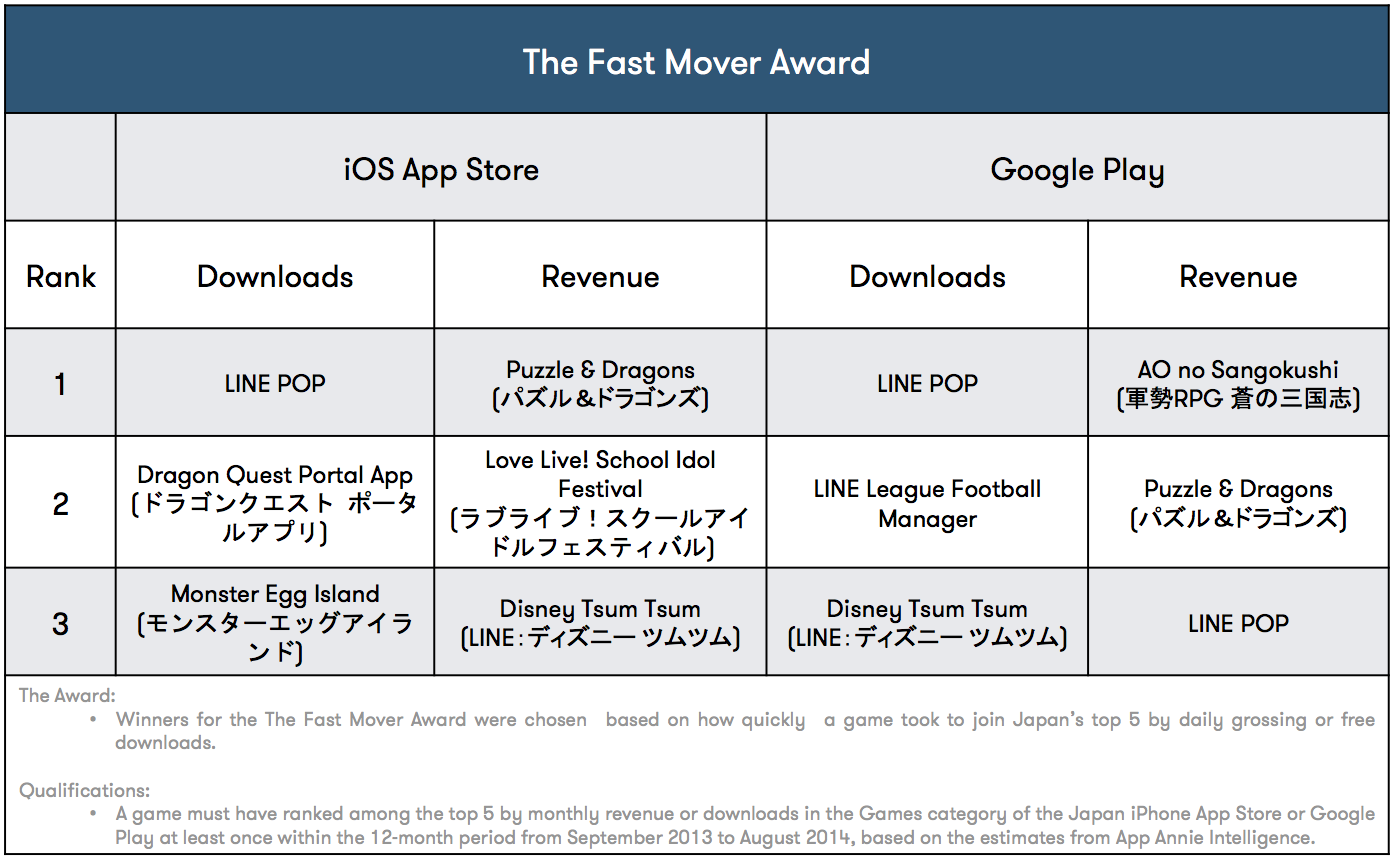 LINE POP reached the top spot on the iPhone App Store and Google Play by its first and third days after release (respectively), and broke into top 5 by revenue on Google Play on its ninth day. Its successor, Disney Tsum Tsum (LINE：ディズニー ツムツム), broke into iPhone App Store’s top 5 within two days and Google Play Store’s top 5 within five days. In June 2014, LINE League Football Manager, a game in the less popular Sports subcategory, also cracked Google Play’s top 5 by downloads within four days of release. This highlights LINE’s importance as a platform for game distribution. According to the firm, LINE has around 490 million registered users globally as of August 6, 2014. 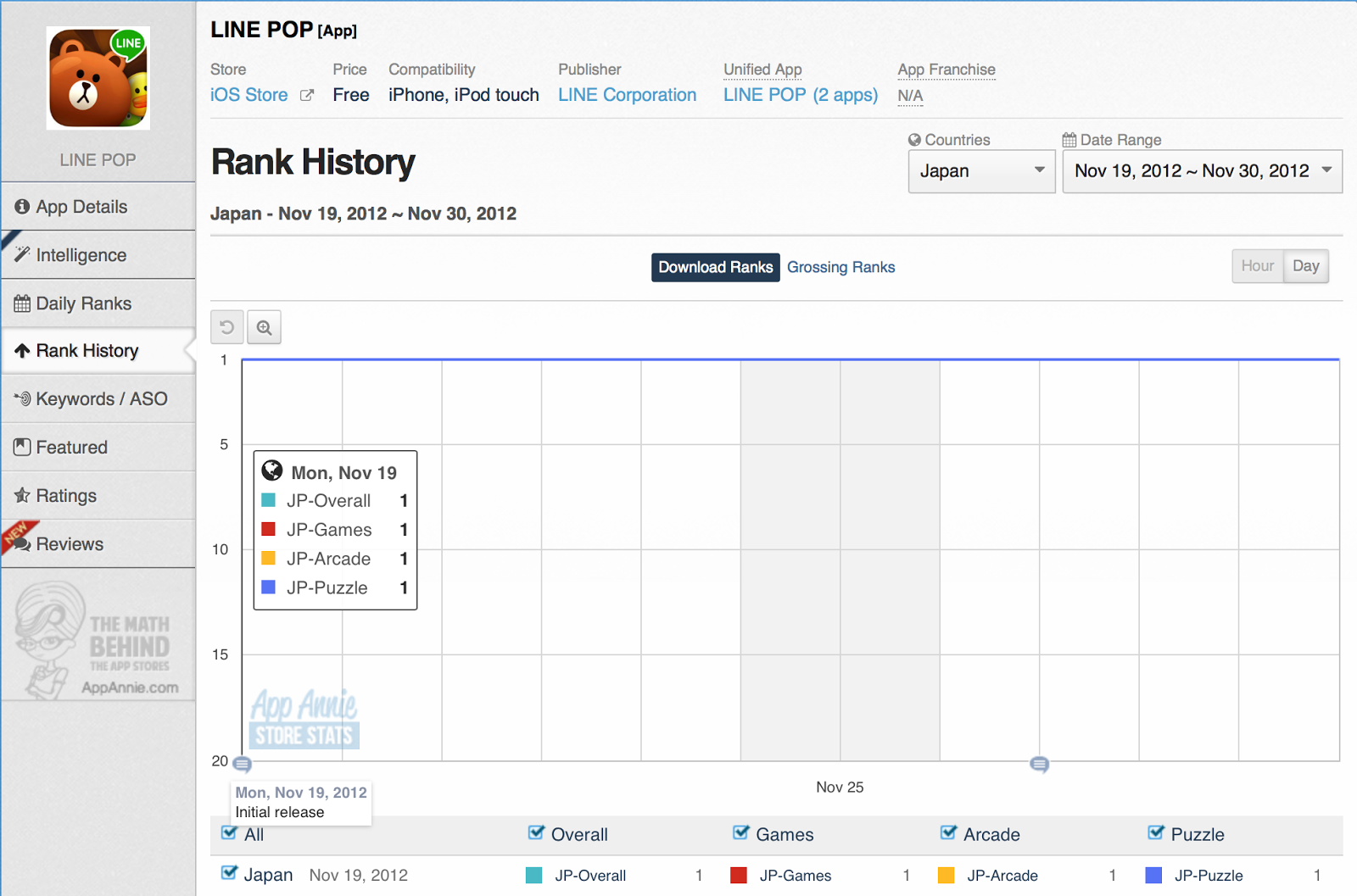 LINE POP championed downloads on the iPhone App Store since day one of its release. 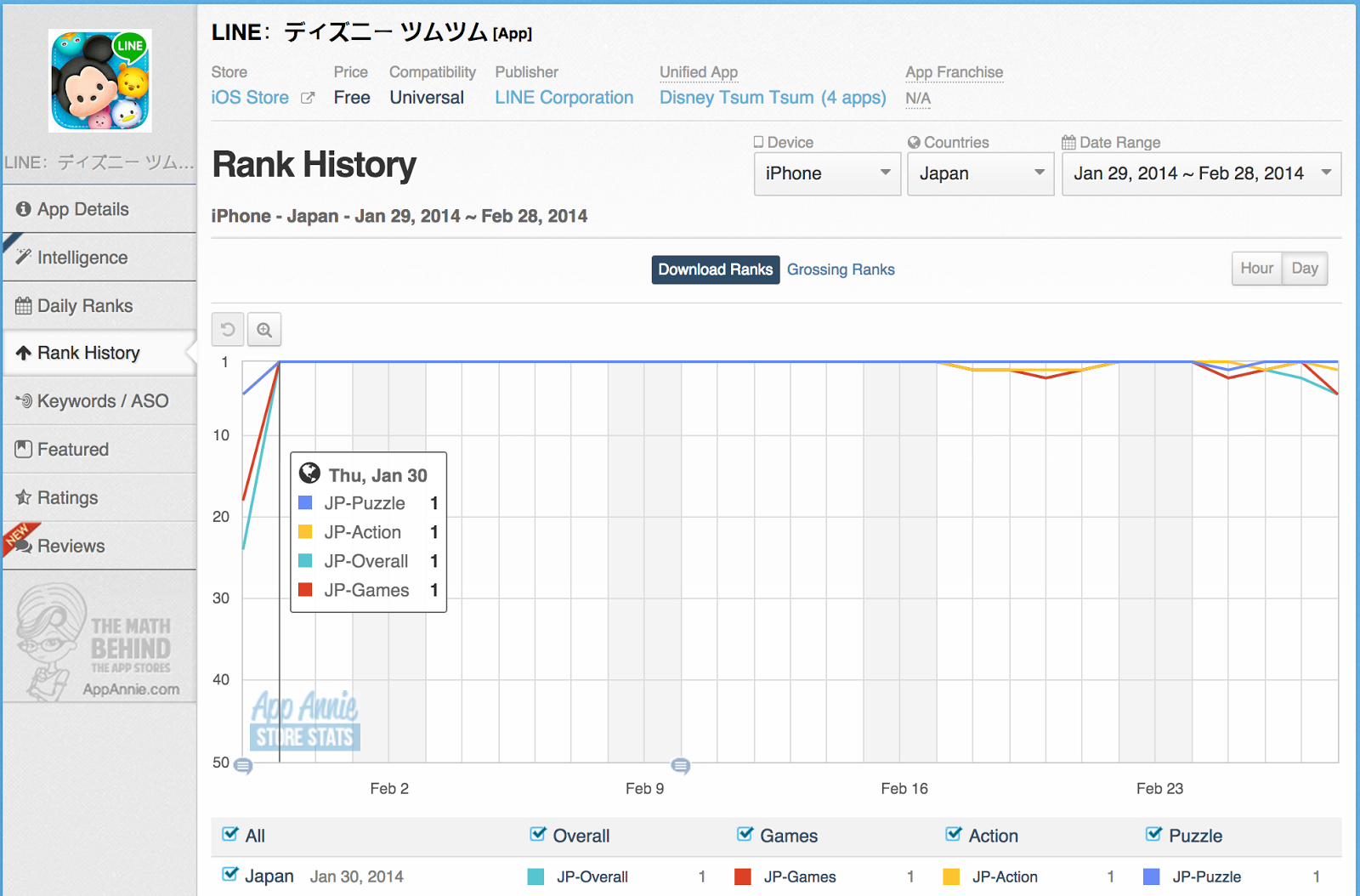 Disney Tsum Tsum reached #1 on the download charts on the iPhone App Store within two days of launching.

The Award: Winners for The Monetization Award tracks games with the highest cumulative revenue per download since their initial release date on Japan iOS App Store or Google Play.

Qualifications: The game must have ranked in the top 5 by monthly revenue or downloads in the Games category of the Japan iOS Apple Store or Google Play at least once within the 12-month period from September 2013 to August 2014 to qualify, based on the estimates from App Annie Intelligence.

Significance: A close proxy of revenue per user, cumulative revenue per download is a good indicator of a game’s monetization capability via in-app purchases. Key factors impacting monetization include game design, in-game economy design and live game operations like promotion strategies, which can create more in-app purchase opportunities and more motivations for players to pay. Excellent promotion strategies and game updates can boost the lifetime value of a game for the publisher by creating an incentive for gamers to keep playing, substantially increasing its life cycle. 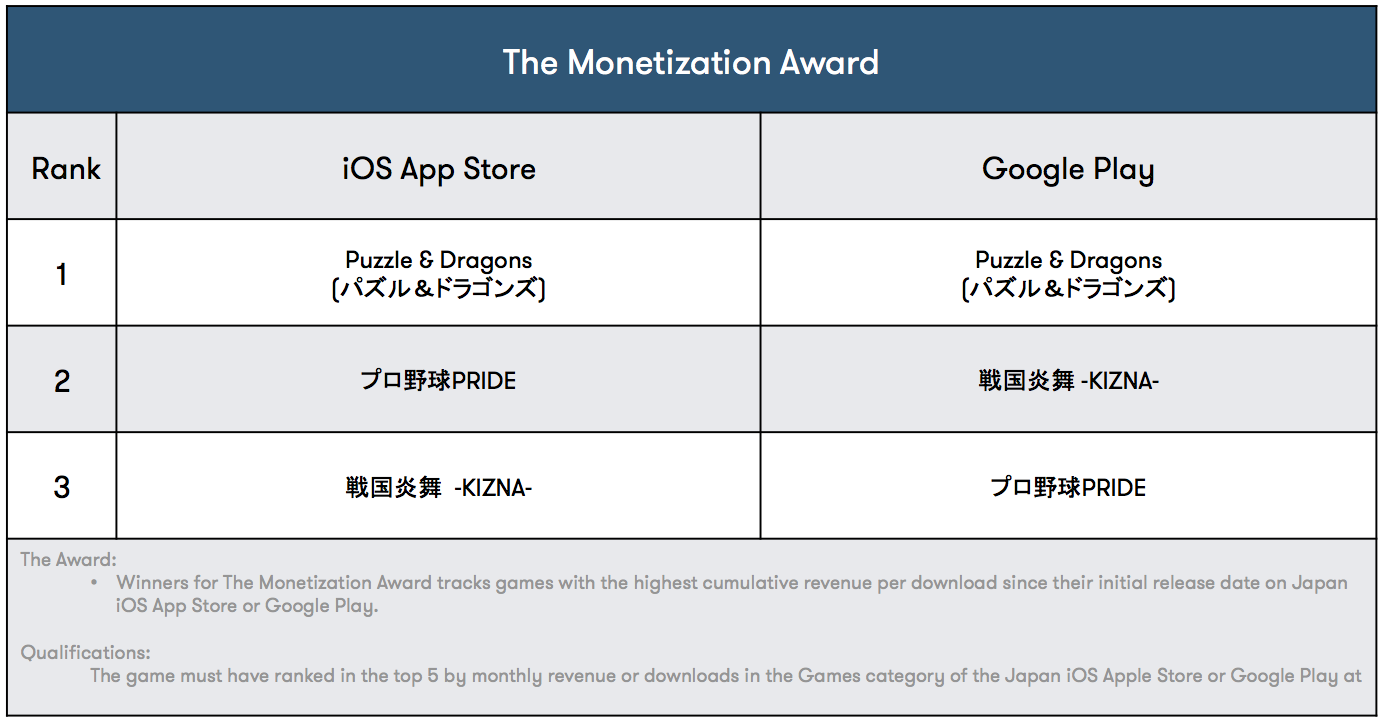 Once again, Puzzle & Dragons maintained a significant lead over runner-ups プロ野球PRIDE and 戦国炎舞 -KIZNA- on both iOS App Store and Google Play. Aside from the games listed above, The World of Mystic Wiz and ドラゴンリーグＸ also performed well in this category. In Japan, trading card and role-playing games are more likely to extract more revenue from their customers due to their more abundant content. Content-light casual games, though they generate heavy downloads, collect much less revenue per user.

The Award: The Worldwide Success Award tracks the number of times a Japanese game broke into top 10 charts outside Japan.

Qualifications: A Japanese game must have entered the top 10 charts outside Japan by grossing or free downloads in the Games category of the iPhone App Store or Google Play within the 12-month period from September 2013 to August 2014, based on the records from App Annie Store Stats.

Significance: The Worldwide Success Award measures a Japanese game’s success outside of Japan, which is the strategic goal of many Japanese publishers. 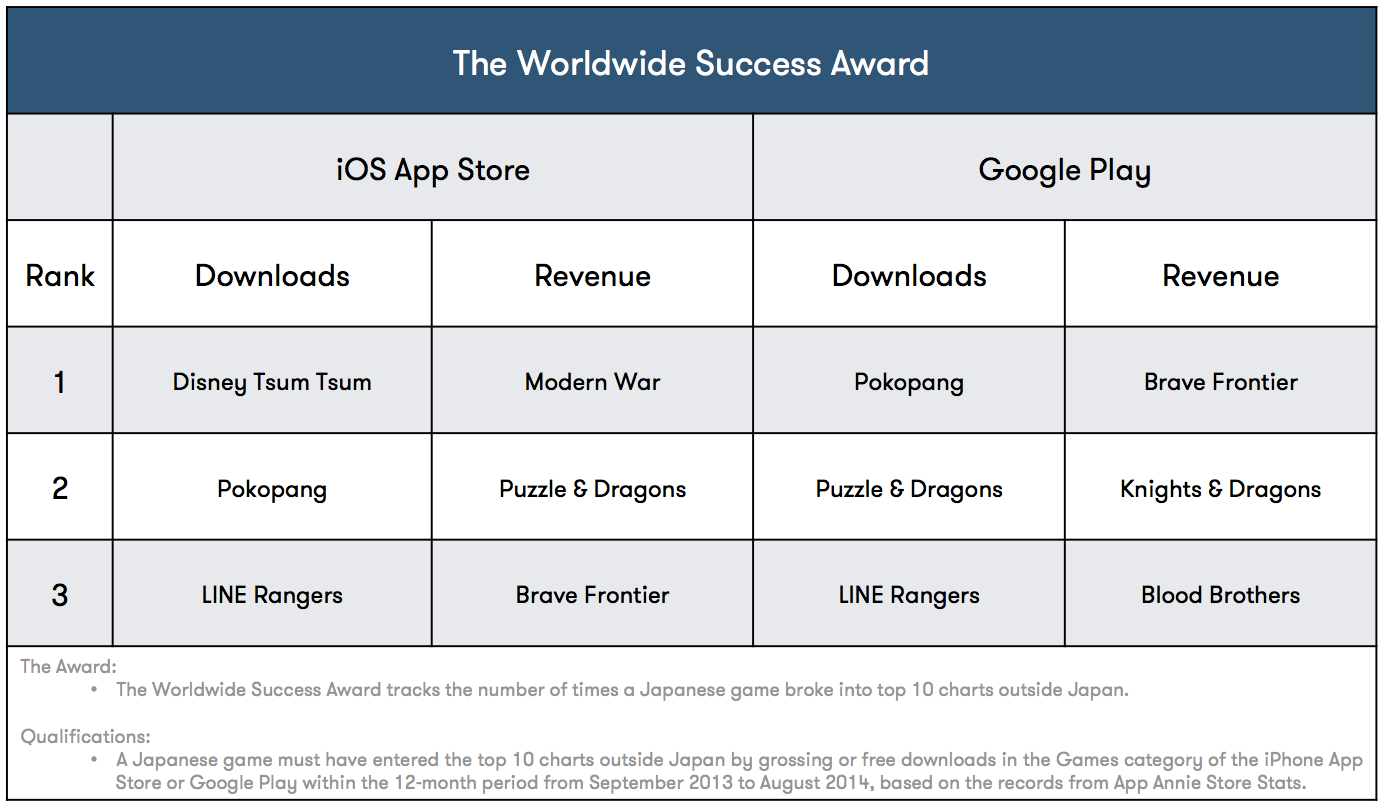 Localization is key when promoting games in another country. Local pop culture, game consumption behavior and marketing channels are major areas to consider when localizing a title.

We found two distinctive ways with which Japanese games achieved international success. On the one hand, games like Puzzle & Dragons, LINE Rangers and Pokopang sourced their strength from Japanese pop culture. Their popularity in Japan integrated themselves as icons of pop culture. In other markets where local pop culture is influenced or even shaped by Japanese pop culture, such as Taiwan, Thailand and Indonesia, young people may naturally opt to use LINE to communicate with each other, kill time with Pokopang when waiting for the train, or spend the whole night on “serious games” like Puzzle & Dragons.These are the same people who are used to buying things at 7-11, reading One Piece and Naruto, listening to AKB48 and watching TV dramas starring Takuya Kimura.In countries where LINE is not a major player, publishers released their games on other messaging apps like KakaoTalk.

On the other hand, another group of games, represented by Knights & Dragons and Modern War, are actually developed by overseas studios or subsidiaries of Japanese parent companies. A group of western staff developed games targeting western markets totally with the western ways of product development and marketing -- Naturally there were no cultural barriers and localization is not relevant here. As Japanese publishers seek to expand globally, we expect to see more games tailored specifically for Western audiences. Transformers: Age of Extinction is a recent example -- it was developed by one of DeNA’s overseas studios and generated massive downloads in China, the United States and multiple Western countries.

The Award: The Top Foreign Game Award measures the cumulative downloads or revenue that a foreign game generated in Japan.

Qualifications: The game must have been developed in a foreign country and generated downloads or revenue in Japan’s iOS App Store or Google Play Store within the 12-month period from September 2013 to August 2014, based on the estimates from App Annie Intelligence.

Significance: This measurement provides an overview of what kind of foreign games are currently successful in the Japan market -- the largest mobile game market globally. 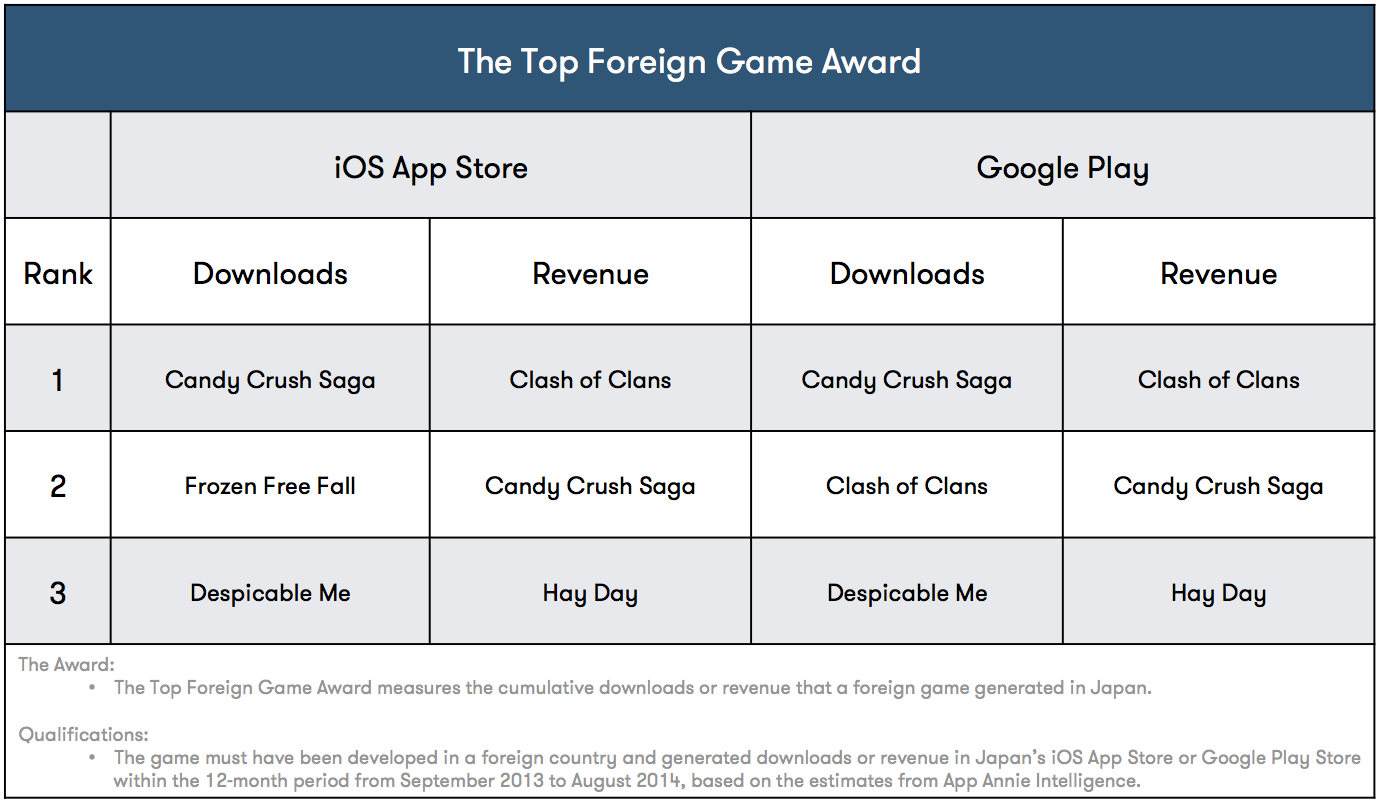 Clash of Clans and Candy Crush Saga are the most successful foreign games in Japan, just as they dominate the worldwide marketplace.

Global hits Clash of Clans and Candy Crush Saga earned top spots in Japan, while Frozen Free Fall and Despicable Me saw success from their tie-ins with beloved movies Frozen and Despicable Me. These examples provide evidence that strong brands can help a game win in overseas markets, even if the market has its own distinctive culture.