Japan is currently one of the three largest markets for smartphone apps. In the last decade, Japanese phone makers, carriers and service providers have collectively built an ecosystem providing various features far ahead of other markets, such as email, video streaming, live TV, ebook stores, GPS navigation and e-wallets. Unique feature phone experiences have shaped Japanese consumers’ dependency on phones, which translates to opportunities for developers as they transition into the smartphone era.

App Annie is excited to announce the launch of the monthly Japan App Annie Index for Apps. This report will provide a detailed look at the major movers in one of the app economy’s fastest-growing markets to help inform your business decisions in the region. To find out what’s hot in Japan in Games, please check out the Japan App Annie Index for Games. For more information on global top apps and publishers, see the Worldwide, United States, United Kingdom, China and Russia charts for July. 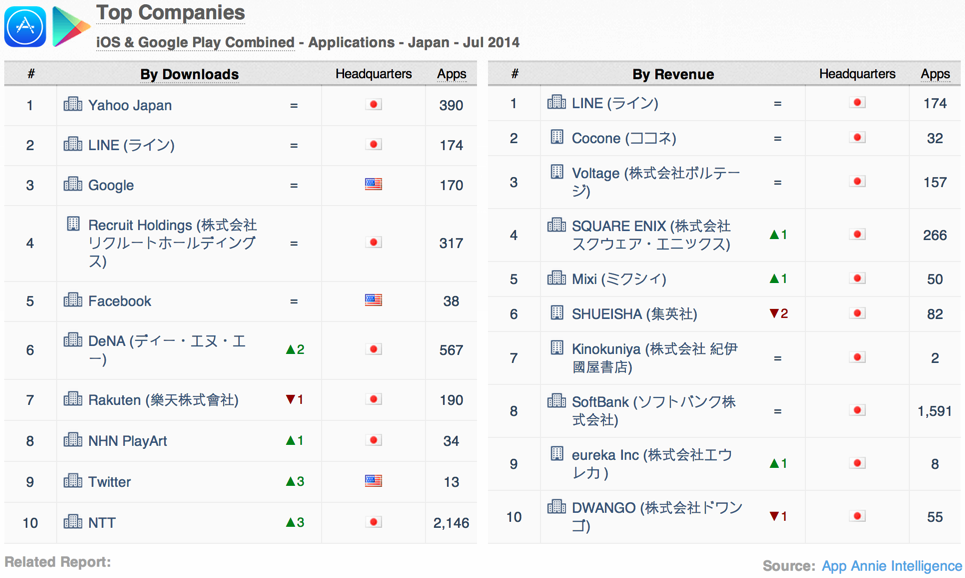 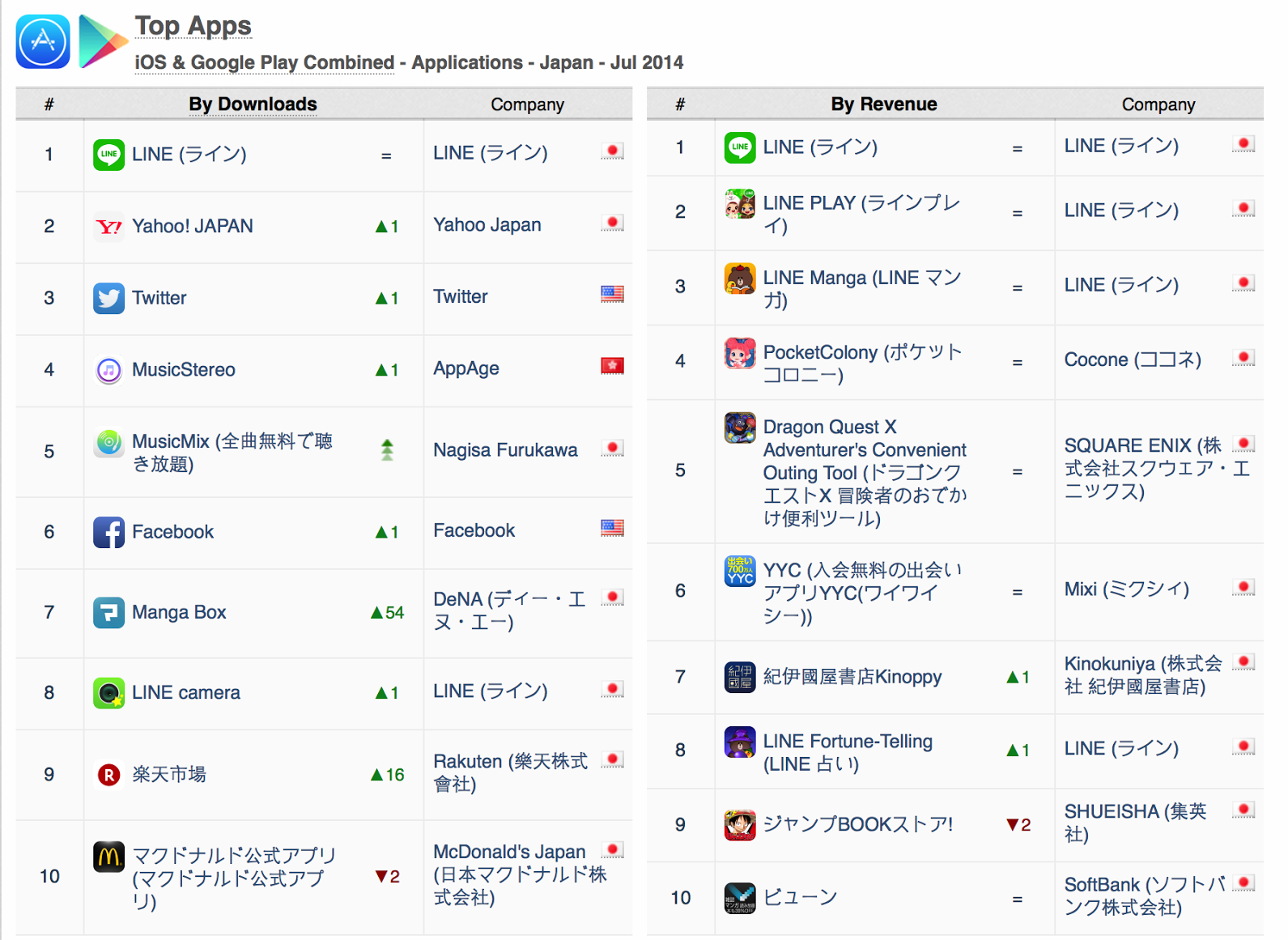 Digital book publishing has grown steadily in Japan since its rapid rise during the feature phone era, reaching US$700M in 2010. Therefore, it should come to no surprise that one of the primary uses of smart devices is reading ebooks. On both iOS and Google Play, multiple book-related apps have remained within the top 10 rankings by downloads and revenue over the past months.

Jump Book Store!, Kinokuniya Kinoppy, Viewn and LINE Manga (from left to right) are the big four earners in Japan, while ManagBox is catching up.

There are three types of bookstore apps -- publishers, bookstore chains, and Internet/mobile companies -- in addition to ebook apps directly from content creators. The first and second types represent traditional book and magazine publishers, such as Shueisha (集英社), and bookstore chains, such as Kinokuniya (紀伊國屋書店). These publishers arrived on mobile devices with bookstores apps Jump Book Store! (ジャンプBOOKストア!) and Kinokuniya Kinoppy (紀伊國屋書店Kinoppy) to offer their loyal readers another channel to purchase, store and consume content. 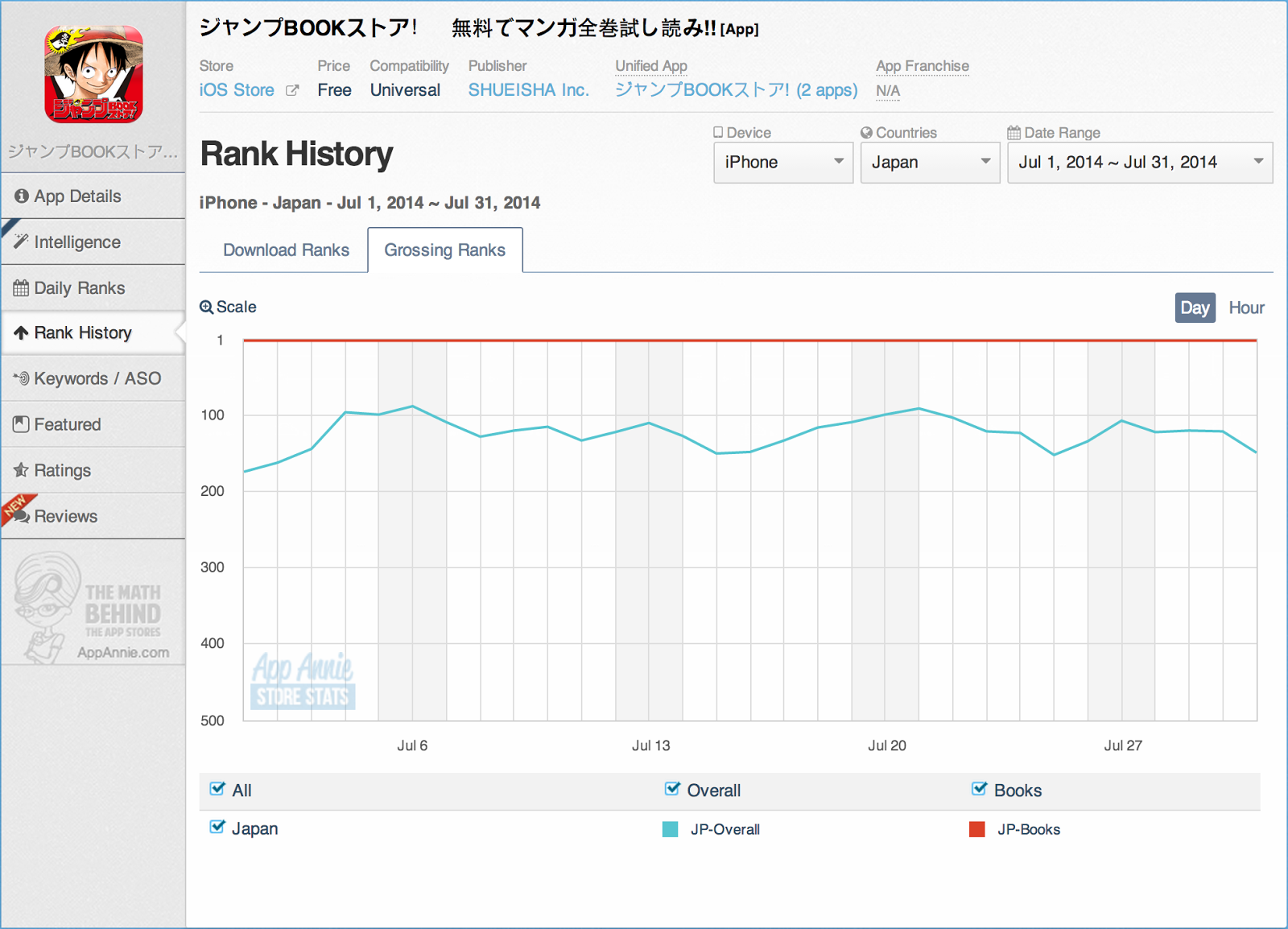 Manga giant Shueisha’s bookstore app regularly ranked in the top 10 by revenue in Books on iOS and Comics on Google Play.

The third type of bookstore app consists of Internet/mobile companies that have accumulated large user bases through peripheral services, such as LINE (ライン), DeNA (ディー・エヌ・エー) and SoftBank (ソフトバンク株式会社) (through its subsidiary Viewn (ビューン)). They leverage their user base and deep pockets to obtain content from multiple print publishers and independent content creators for their one-stop shop bookstore apps, such as LINE Manga (LINE マンガ), MangaBox (マンガボックス) and Viewn (ビューン). 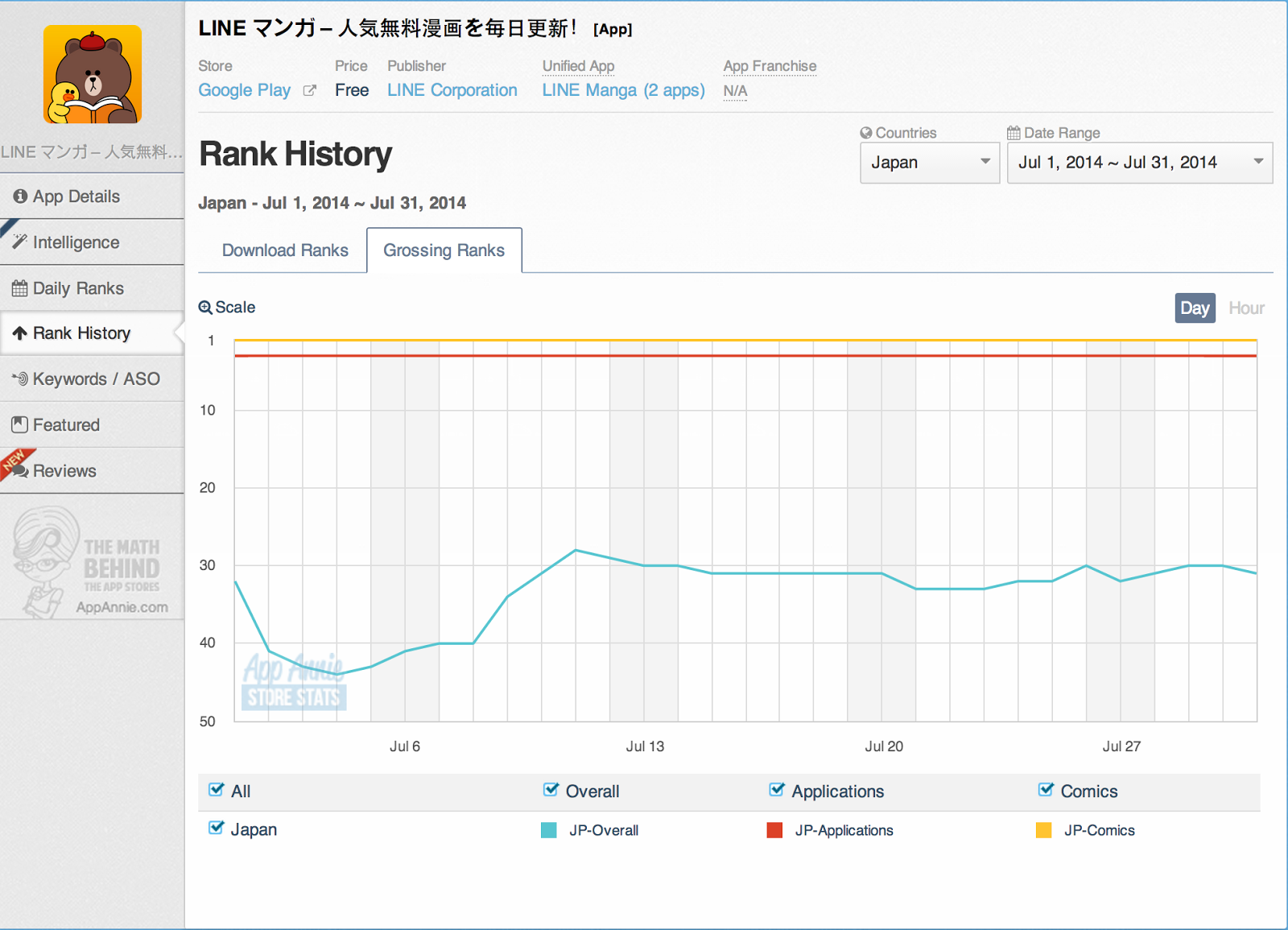 LINE Manga, a key monetization vehicle for LINE, has long kept its #1 spot among Comic apps.

The fourth type is the interactive ebook app, such as ReLIFE, directly published by independent content creators. Its success further proves app stores provide a good platform for self-publishing high-quality content and bypassing traditional publishers. The technology has reduced the overall costs of publishing content.

Players Live a Second Life on LINE PLAY and PocketColony 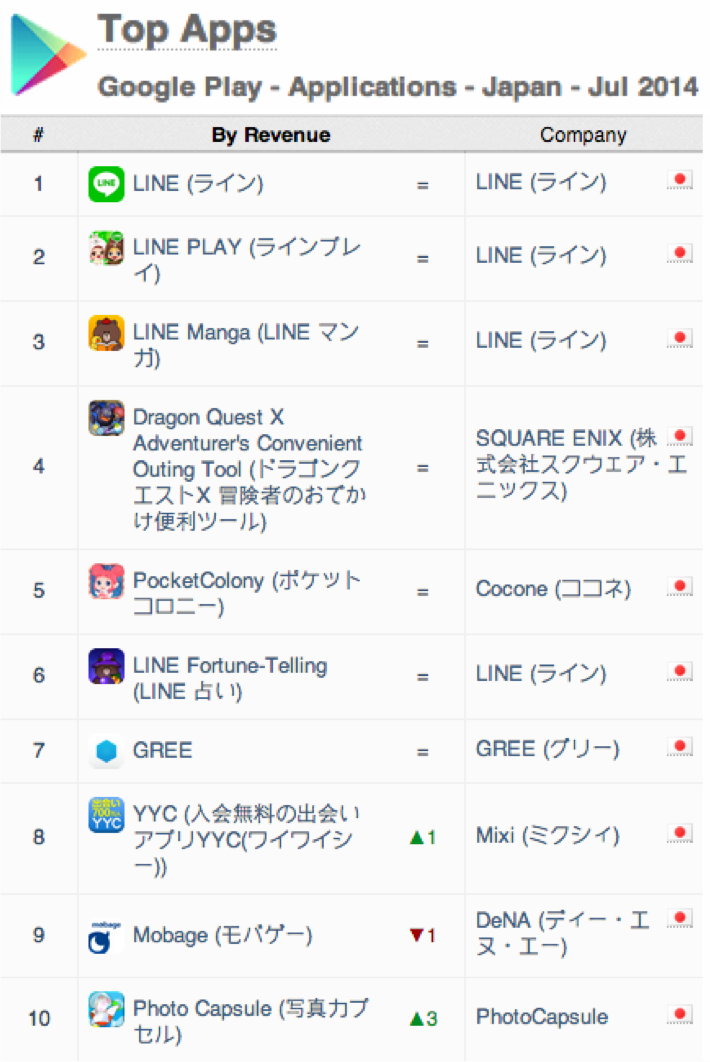 In his impactful interpersonal communication study, psychologist Miyahara explained that Japanese people "are low in self-disclosure, both verbally and nonverbally... Most of these attributes are ascribed to the Japanese people's collectivistic orientations." That theory seems to be less applicable to Japan’s current generation, at least when referring to their online lives. LINE PLAY (ラインプレイ) and PocketColony (ポケットコロニー) are two social apps that let users live a second life online by crafting an avatar for themselves, spending real money on virtual clothes and houses, and socializing with others. These two apps have ranked among the top 10 apps excluding games by monthly revenue on iOS and Google Play since their release years ago. 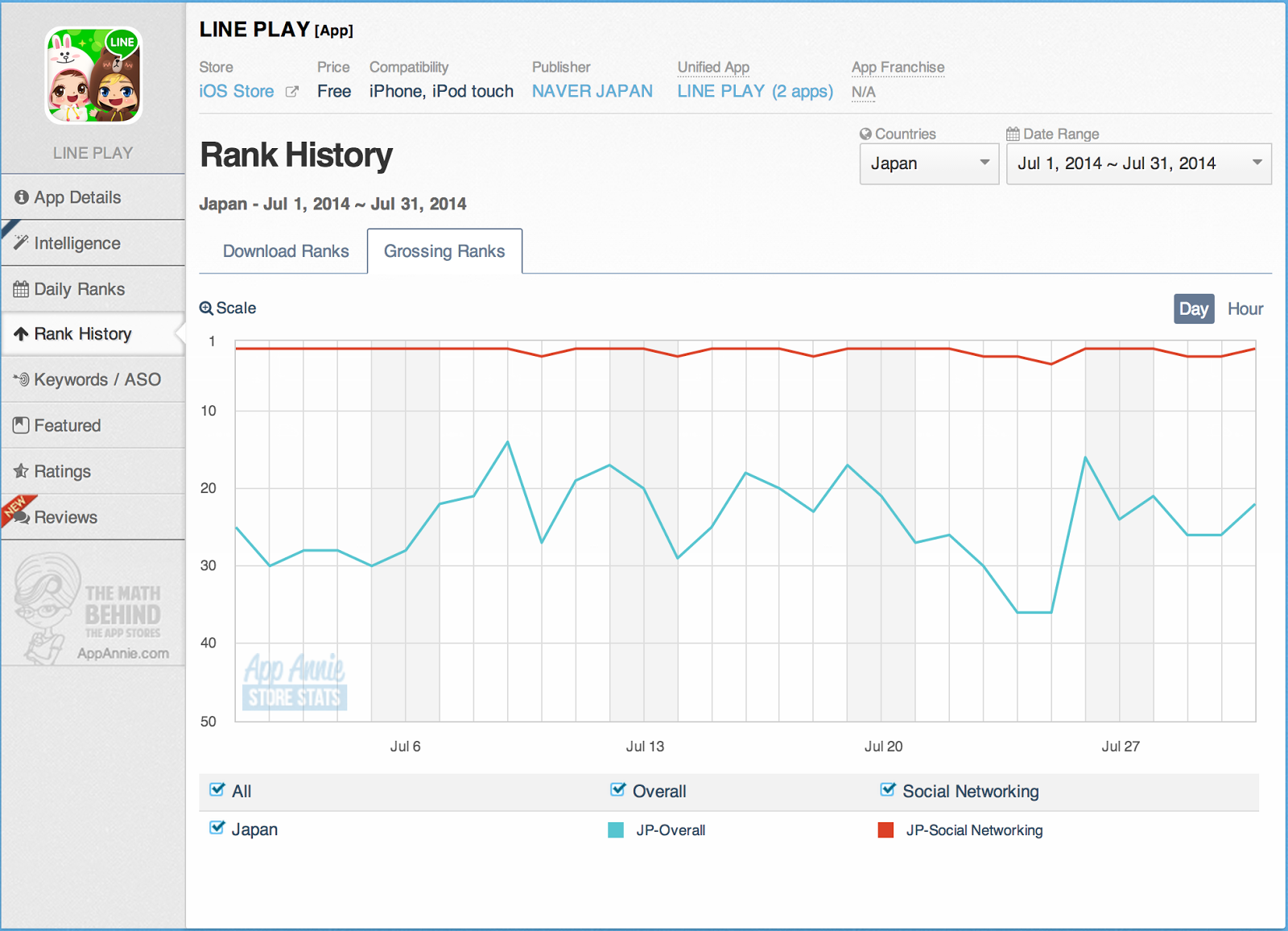 LINE PLAY consistently ranks in the top 5 by revenue in the Social Networking category on the iOS App Store in Japan.

For Japanese people who need to conform to collectivist social norms in their real lives, these avatar apps add a distinct value by letting users build a "kawaii" virtual society allowing them to express their creativity and personality without revealing their real names. 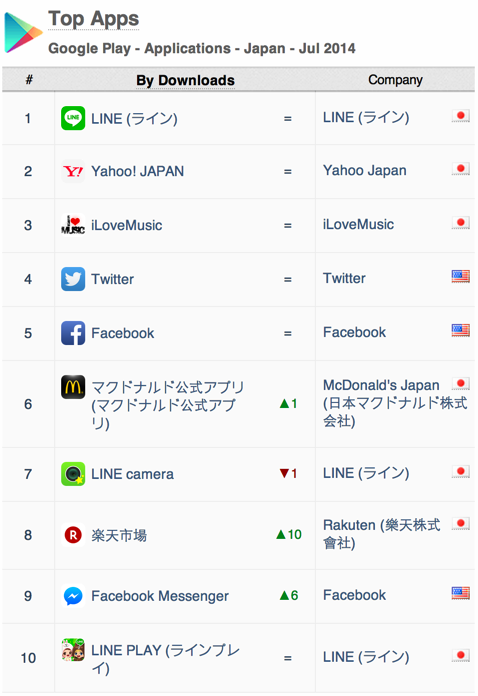 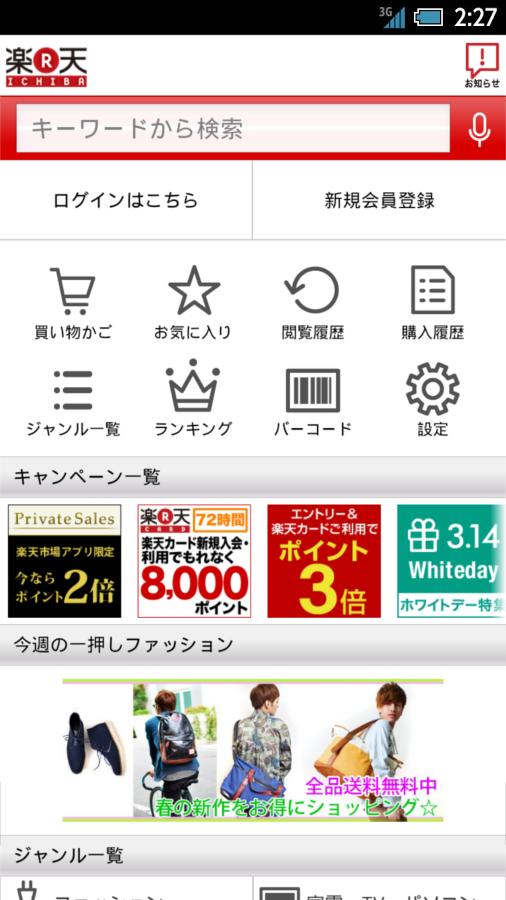 Dating services YYC and Pairs (ペアーズ) found their apps among the top 10 on iOS by revenue, with YYC also finishing at #8 on Google Play by revenue. Both YYC and Pairs allow free registration, but monetize users' actions like profile views and user-to-user messages with their in-app currency. Originally a web service, YYC has 14 years of history with 7 million registered members; Conversely, Pairs is a relatively new app built on Facebook with 1.3 million current active users. Both apps are further developing their security and privacy mechanisms. Pairs has started expanding to other East Asian markets, leveraging cultural carry-over.

LINE UP for the Camera!

The Japanese enjoy taking pictures of events in their everyday lives, keeping a record of delicious food they’ve eaten, reunions with friends and beautiful scenery. This fact drove Sharp and J-Phone to introduce the world’s first camera phone. Thus, it’s quite natural to see LINE Camera, a camera with photo enhancement features, among top 10 apps on Google Play in Japan. In addition to taking photos, LINE’s app allows users to add flavor to their photos with various stamps, style filters and frames. Moreover, the app even helps users appear prettier in selfies with its powerful facial recognition capabilities -- the killer feature that made this app #1 among apps in the Photo category.

For those of you who also are looking for an update on top apps in gaming, please check out our Japan App Annie Index for Games. To keep up-to-date with all the changes at the top of the app and publisher charts, check out the complete set of App Annie Index tables.