Messaging Apps: Where They're Popular and Major Revenue Opportunities

Messaging apps are an increasingly important part of the mobile app space. Facebook’s WhatsApp Messenger and Facebook Messenger are particularly strong throughout the West, while local heavyweights such as WeChat, LINE and KakaoTalk lead in key markets across Asia.

In this report, we provide an overview of the messaging app landscape and highlight the leading apps and discuss their evolution into full-fledged platforms, which is expanding their revenue opportunities and increasing their influence in the overall app economy. (To see how we define messaging apps, please check the notes at the end of this report.)

Through acquisition and strategic unbundling, Facebook expanded its presence into the messaging app space. The company acquired hugely popular WhatsApp Messenger in February 2014. Later that year, it made the decision to move all worldwide messaging functionality from Facebook to Facebook Messenger.

To put Facebook’s success in context, there are three messaging apps among the Top 10 apps (outside of games) by all-time worldwide downloads on the iOS App Store. WhatsApp Messenger and Facebook Messenger account for two of them, and Microsoft’s Skype is the other. 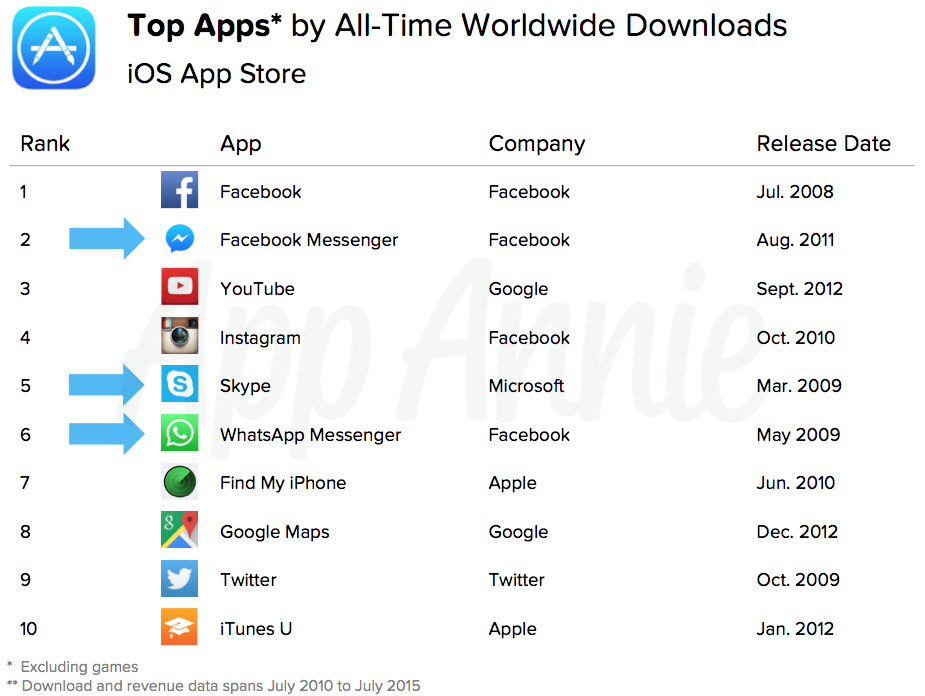 Facebook Messenger and WhatsApp Messenger are among the Top 10 all-time most-downloaded apps on the iOS App Store.

Facebook Messenger and WhatsApp Messenger were the top messaging apps by MAU in key countries, such as the United States and Brazil, in Q3 2015.

In Asia, heavyweight apps have built up a substantial user base and strong network effect in their local markets. For example, WeChat leads in China, LINE is dominant in Japan and KakaoTalk is top in South Korea.

The global landscape for MAU (as seen in the figure above) looks much different than that for revenue (in the figure below). For example, Skype and Viber expanded their successful business model of charging for credits from desktop to their mobile apps. In addition, Facebook Messenger does not currently directly monetize its users and WhatsApp Messenger only charges $0.99 per year (after a one-year free trial). As a result, Skype and Viber are Q3 2015’s top revenue-generating messaging apps in many of the markets where Facebook’s apps led by MAUs.

The top messaging apps by revenue are more fragmented than those by MAU in Q3 2015.

The massive number of messaging app users presents huge opportunities for those who can take advantage and convert app downloads into revenue. Successful monetization strategies vary greatly across platforms and regions as the messaging app space serves an extraordinarily diverse and global user base.

The leading messaging apps in Asia, in particular, have expanded their reach by adding features that go beyond merely sending and receiving messages. This extra functionality ranges from voice and video calls to games, taxi hailing and even local government services.

Messaging apps, particularly those from Asia, have evolved into platforms by adding features that go beyond just sending and receiving messages.

Through these extra features, these apps have evolved from messaging to full-featured app platforms. This is creating new revenue opportunities and opening up new battlegrounds in areas such as mobile payments and media content.

LINE leads messaging apps in iOS App Store revenue and is the second highest-grossing iOS app (outside of games) of all time. A significant portion of its revenue comes from digital sticker sales. In addition, games connected to messaging platforms earn huge revenue, especially in major APAC markets. This is true of games published on LINE in Japan, WeChat in China and KakaoTalk in South Korea.

Although games and messaging features such as stickers have been key to driving monetization to this point, publishers are experimenting with new ways to expand their revenue potential. For example, WeChat is leading the way in m-commerce. It has experienced huge success as a mobile payment platform with its users able to purchase movie tickets, taxis and even municipal services. Other messaging platforms in APAC have followed suit while the West has yet to scratch the surface of this type of functionality. 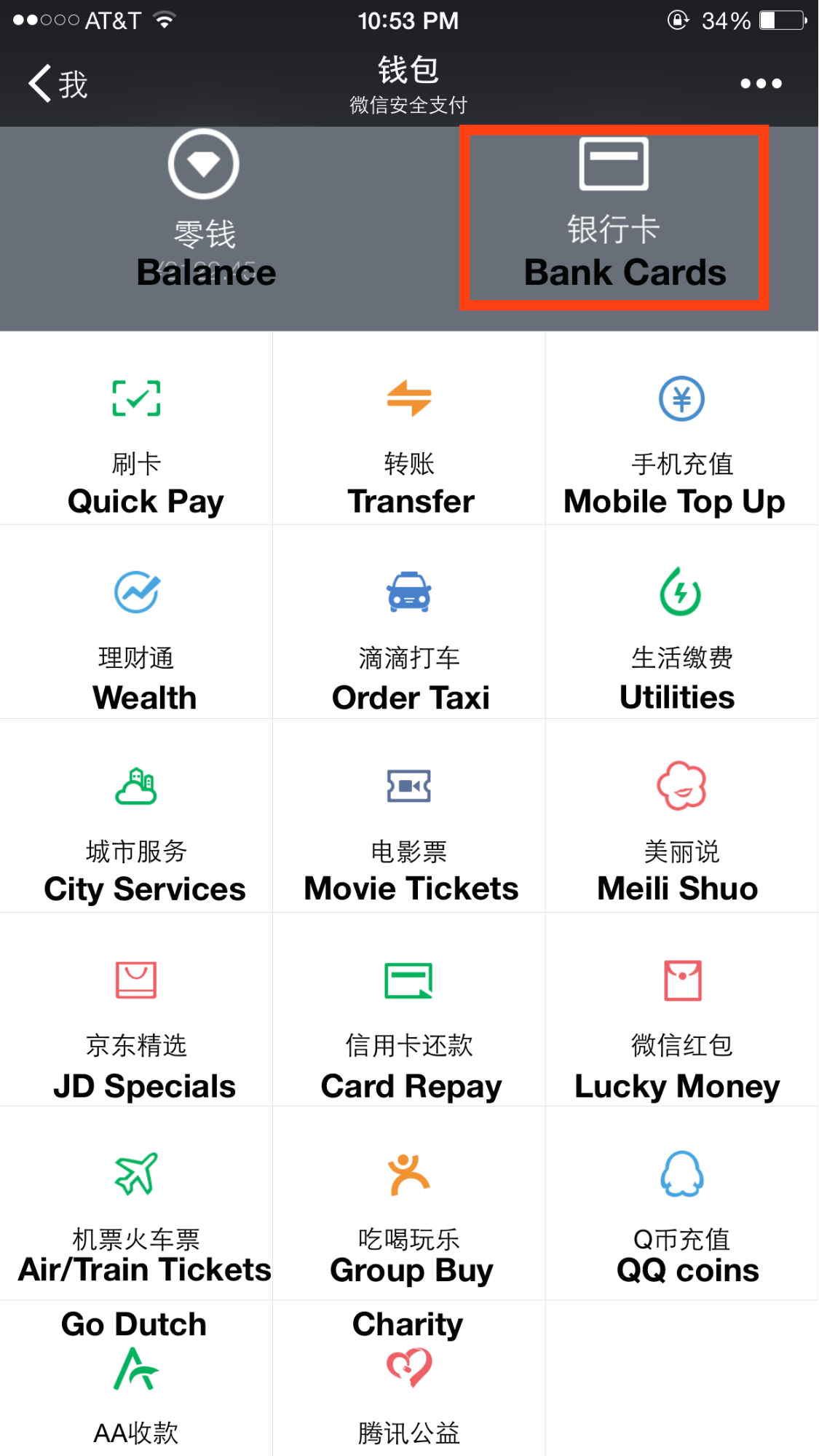 Messaging apps are also testing the waters with advertising. Their progress in this area has been slow but steady as publishers are understandably wary of alienating their user base with intrusive ads. WeChat, for example, has successfully integrated ads into its users’ Moments timelines.

Innovative forms of advertising and brand promotion will be key moving forward. For example, Snapchat Discover, which allows media brands to directly engage with customers in innovative ways, pushes the boundaries of advertising on messaging platforms while sidestepping many of the issues of traditional advertising. We expect publishers to continue to find new ways to push this model further in the messaging app space. 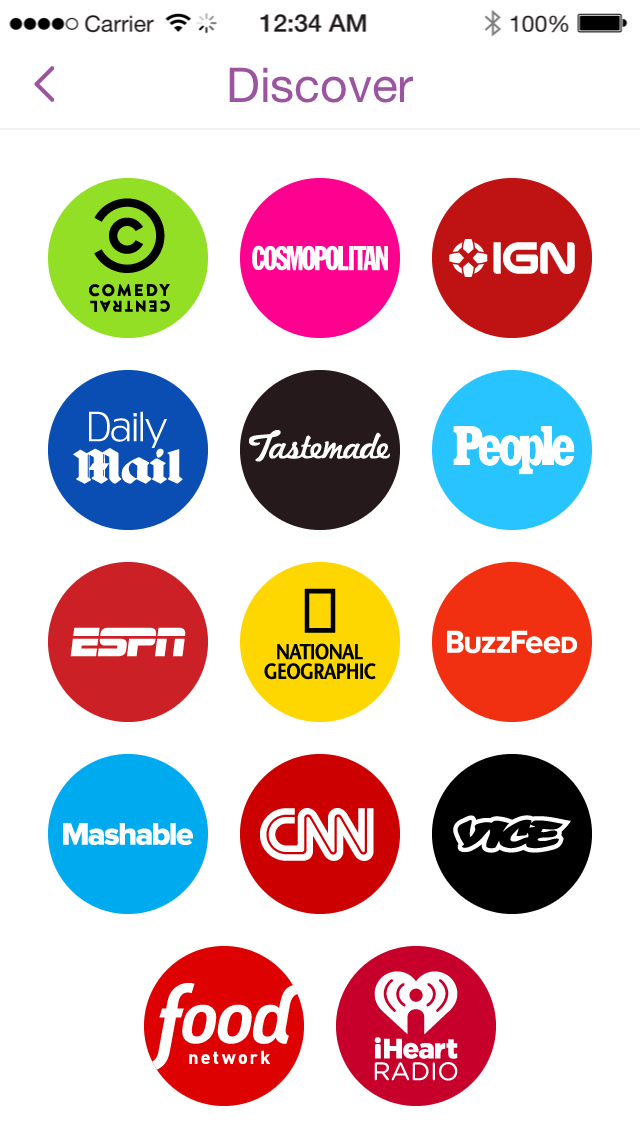 Looking ahead to the future, the messaging-app-as-platform paradigm is likely to continue to gain momentum, with APAC leading the way. As more services are added, an increasing amount of app time is likely to be spent within the messaging ecosystems, further raising their potential for marketers.

It’s not yet clear the extent to which the Asian messaging platform paradigm will carry over to Western markets, but compelling services will likely stimulate growth. We expect that messaging app publishers will continue to explore new ways to monetize the apps, opening up further opportunities for content publishers and advertisers.