App Annie Mobile App Forecast: China to Surpass the US in 2016

In the release of our mobile app store forecast, we highlighted the growth we are projecting across mature and emerging markets. In this post, we share key insights on the China app market given its unique characteristics and growing dominance in the global market.

China is the largest smartphone market and many Chinese consumers view this device as their primary computing device. Given the prominence of smartphones, China is on track to become the largest single app market this year, surpassing the United States in gross app store spend. Looking at Android specifically, the absence of Google services (and Google Play) to date has created app distribution opportunities filled by numerous third-party Android stores, including some from prominent regional players like Tencent and Baidu. However, the lack of a unified distribution channel has proven to be a challenge for Android app developers targeting China.

China is a tale of two markets: mature and emerging and our forecast reflects the characteristics of both developed and emerging economies. While smartphone ownership in Tier 1 and Tier 2 cities like Beijing and Harbin nears saturation, other cities and regions are still underpenetrated with significant room for growth. Continued declining prices of high-quality Android smartphones will contribute to expanding smartphone ownership in emerging China. As a result, the installed base of smartphones and tablets in the country will grow 2.1x to 1.4 billion by 2020.

We expect app downloads to hit 49.0 billion in 2016 and 90.2 billion by 2020 thanks to strong smartphone adoption in emerging China. Third-party Android stores will be the primary driver of this growth, increasing 2.6x from 2015 to 2020. iOS downloads will also increase, but at a lower rate thanks to Apple’s strength in maturing Chinese Tier 1 and Tier 2 cities. 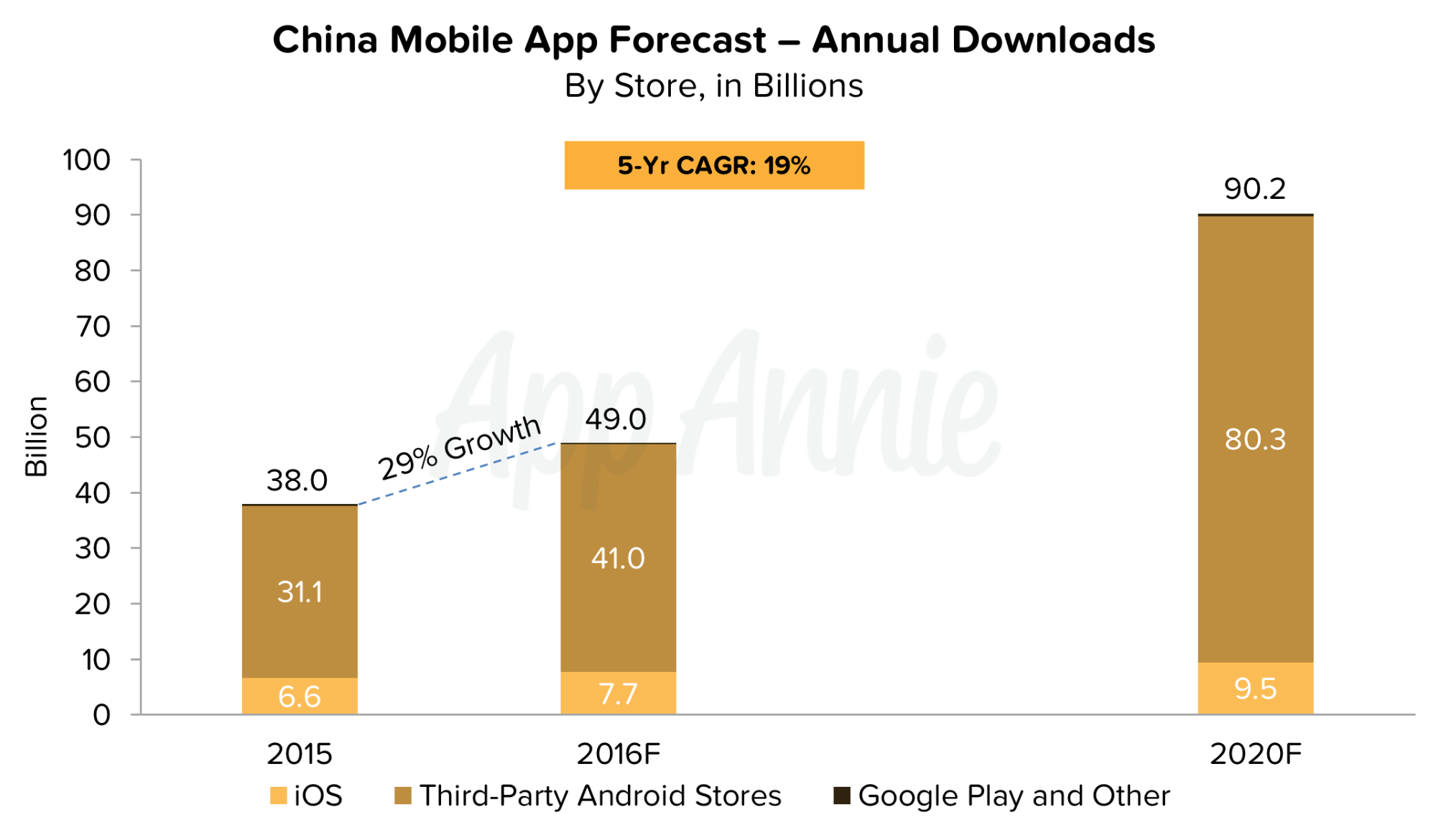 Looking at categories, game downloads will continue to grow but similar to global trends, will be outpaced by downloads of other apps as developers uncover new use cases for first-time users and as existing smartphone owners expand their app usage. Consequently, we expect the share of game downloads to decline from 42% to 32% over the forecast period.

Gross app store revenue in China totaled $8.7 billion in 2015 and will reach $30.9 billion in 2020. While major urban centers like Beijing and Harbin will continue to drive this growth in 2016, market expansion will extend south and west to Guangzhou and Henan and the regions surrounding Shanghai in the forecast’s latter years. 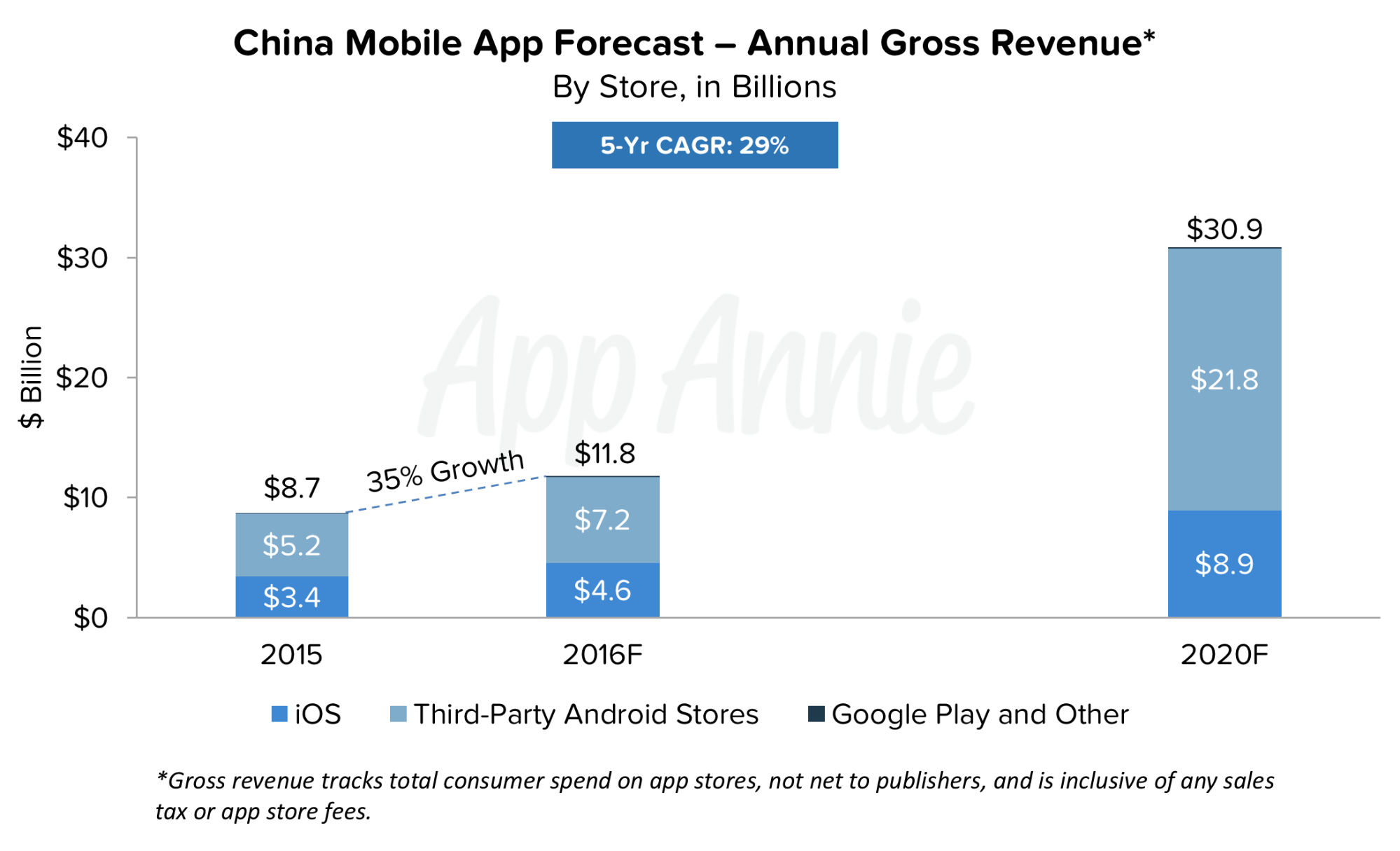 China has proven to be a strategic market for Apple. iOS gross app revenue totaled $3.4 billion in 2015 and will grow 2.6x over the forecast period. While revenue per device on iOS far exceeds other platforms, the sheer number of Android devices in China drives the majority of revenue through third-party Android stores in aggregate — totaling $5.2 billion in 2015. Continuing this trend, revenue from third-party Android stores will grow 4.2x by 2020 as smartphone adoption accelerates in China’s smaller cities. Games will continue to remain the dominant revenue driver, but we expect their share of revenue to decline from 88% in 2015 to 75% in 2020 as subscription models on other apps gain steam.

This forecast shows our confidence in China remaining an app store powerhouse for years to come, accounting for 54% of APAC revenues in 2020, despite potential macroeconomic headwinds. For app developers looking to tap into or expand within this market, we offer three recommendations: