Mobile Holiday Shopping: The Rise of Retail Apps on Android

Black Friday, Cyber Monday and China’s record-setting Single’s Day capped off an eventful November and officially ushered in the holiday shopping season. Holiday shopping this year followed a familiar pattern as consumers increasingly avoided crowded stores in favor of online and mobile shopping experiences. As a result, mobile shopping enjoyed strong growth, even setting a new Black Friday record according to reports, at the expense of brick-and-mortar sales. This large-scale shift to mobile has had a noticeable impact on the platform split of retail app downloads and usage between iOS and Google Play.

Prevailing opinion on mobile commerce is that iOS users are more valuable than Android users because of their relative affluence and propensity to spend. While this remains true, Android is rapidly gaining traction this holiday season as smartphones have become increasingly important for the mass market. 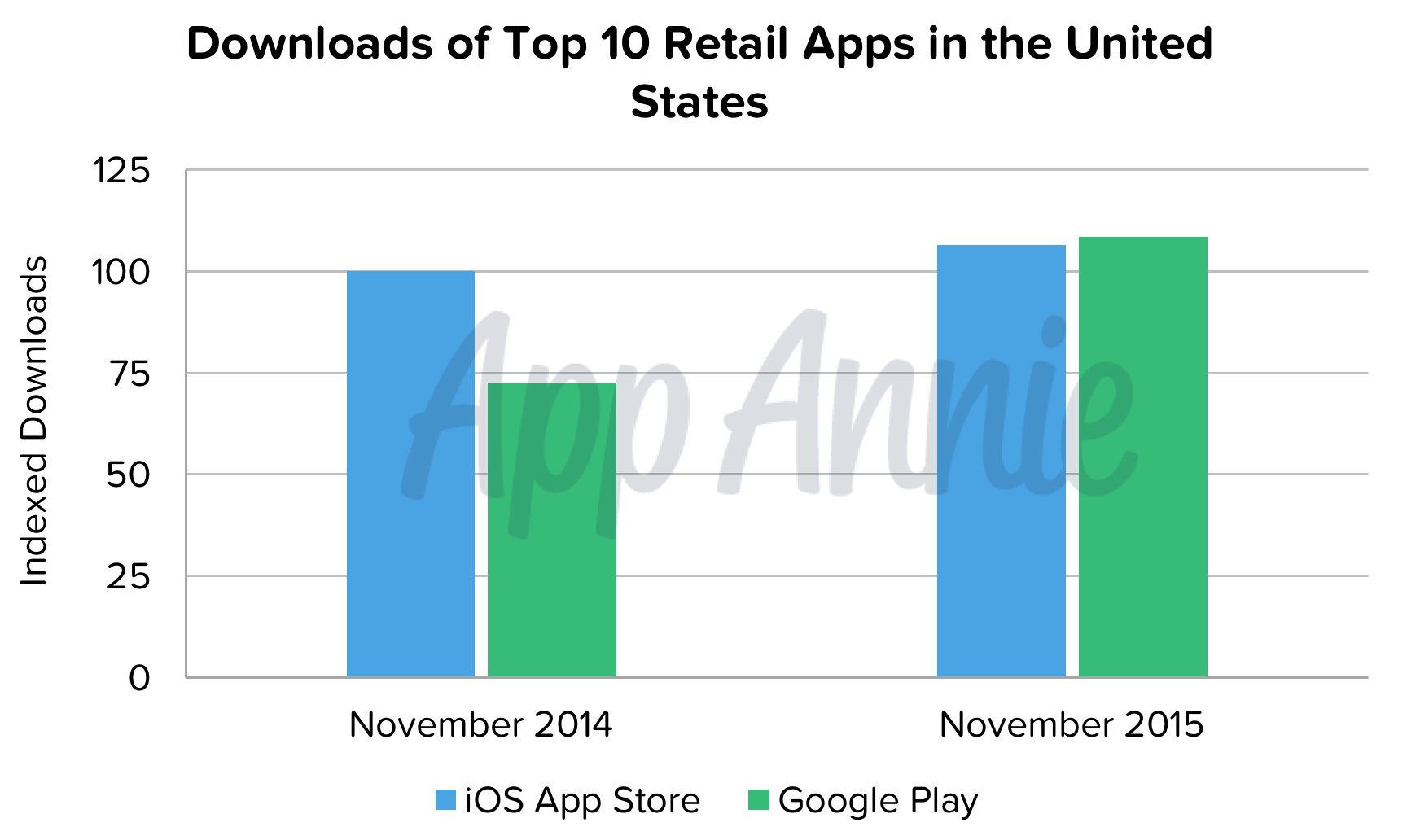 In the United States, downloads of the top 10 retail apps on Google Play edged out those on iOS in November 2015.

In the United States, downloads of the top 10 retail apps on iOS in November 2015 grew by roughly 10% year over year (YoY). In comparison, Google Play downloads grew by a healthy 50% YoY and narrowly edged out those on iOS. 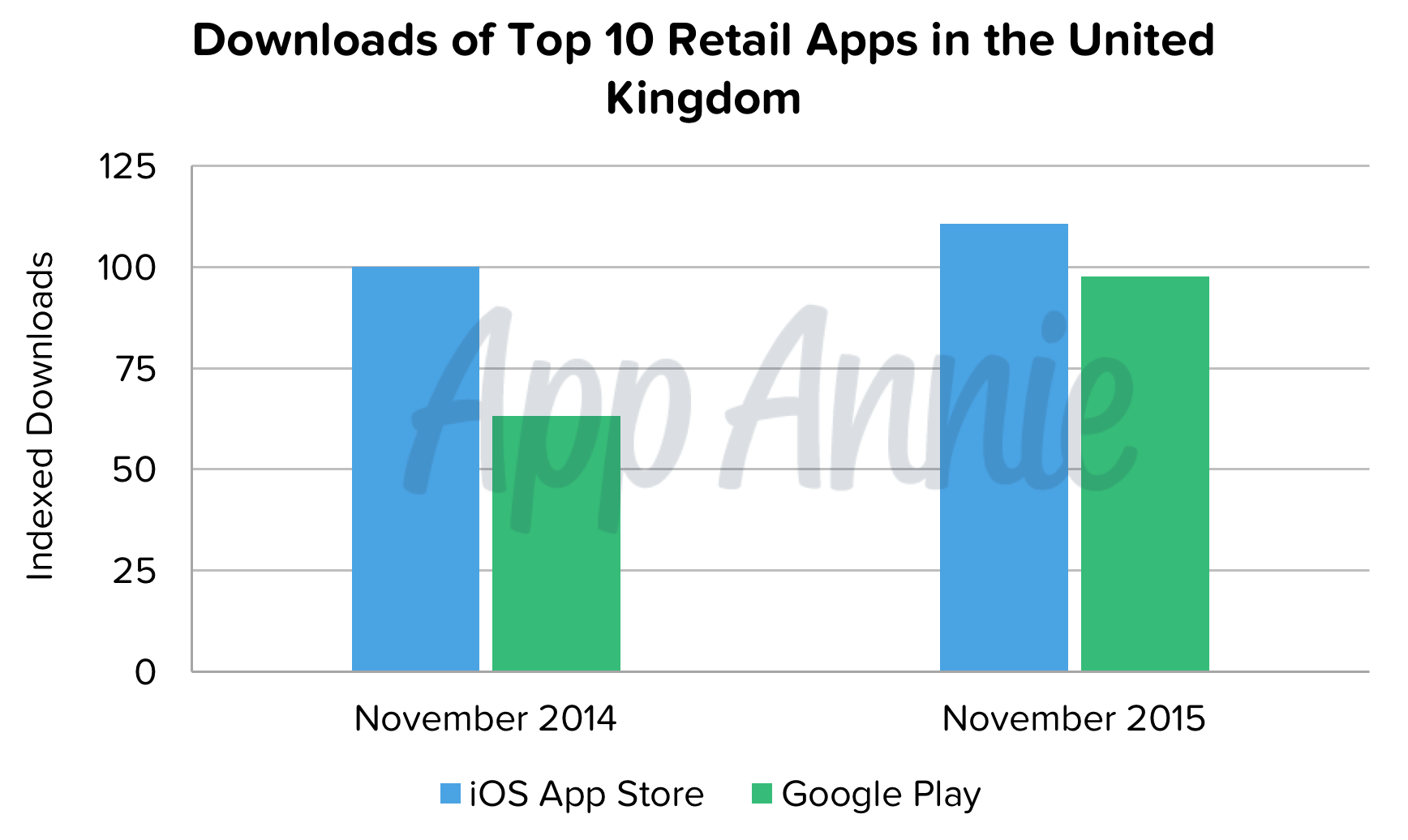 In the United Kingdom, downloads of the top 10 retail apps on Google Play significantly narrowed the gap with iOS in November 2015.

The pattern of retail app downloads in the United Kingdom largely mirrored that in the United States. Downloads of the top 10 retail apps on iOS grew by approximately 10% YoY while those on Google Play grew by 55%, nearly closing the gap with iOS.

These figures point to a maturing ecosystem for mobile commerce. The download propensity for affluent iOS users may have been lower as many could have their go-to shopping apps already installed on their devices. On the contrary, increased download activity on Google Play points to a significantly larger number of first-time mobile shoppers. Increased discounts and promotions during Black Friday and Cyber Monday may have also played a key part in enticing first-time mobile shoppers; e.g., “lightning deals” exclusive to the Amazon app. However, downloading an app is only the first step in the mobile shopping journey. The usage of these apps sheds even more light on shopping behavior of users on both platforms. 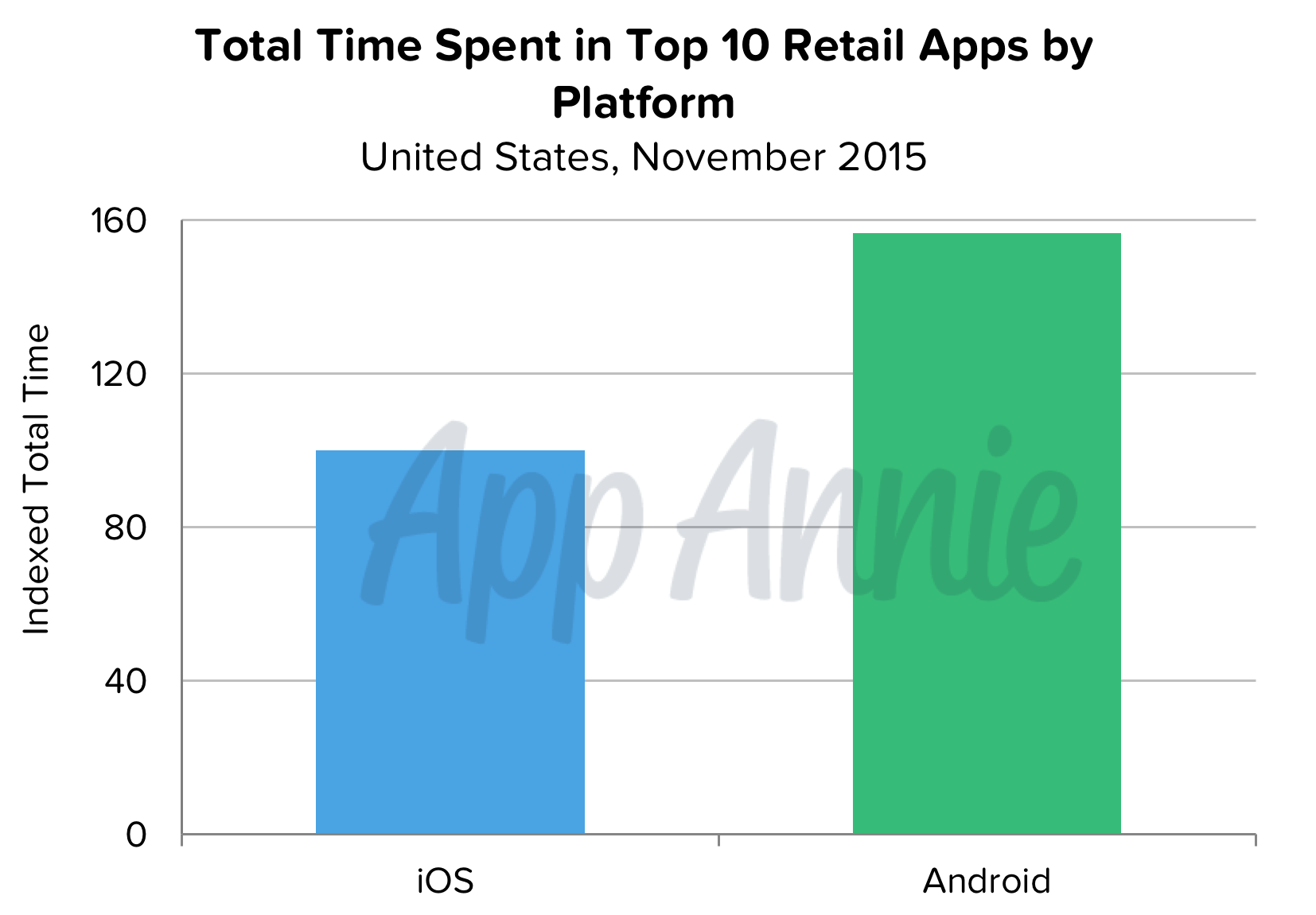 In the United States, time spent in the top 10 retail apps on Android was approximately twice of that on iOS.

In the United States, time spent in the top 10 retail apps on Android was approximately 55% higher than that on iOS. While this data only captures the performance of the top retail 10 apps by monthly active users (MAUs) on each platform, it is still surprising given that more than two-thirds of mobile sales continue to come from iOS devices. This implies that the conversion rate and transaction value for Android users is noticeably lower than iOS users. Given the nature of first-time mobile shoppers and the general growth of mobile devices research and shopping, it is highly probable that mobile apps are increasingly being used as a research and pricing tool. We believe this likely means that some of these purchases are happening in physical stores (a declining — but still significant — chunk of Black Friday sales) or online, but require more reviews and research before these buyers make their purchase.

Based on recent interviews with multiple US-based retailers, we know that in-app shopping carts have higher spend than their web counterparts. Therefore, retailers should aim to drive not just downloads, but engagement and ultimately purchases through their apps. Given the scale of consumer engagement with smartphones and retail apps, retailers need to continue refining their mobile app strategy as they have great opportunity ahead of them to convert mobile users and researchers into mobile purchasers. 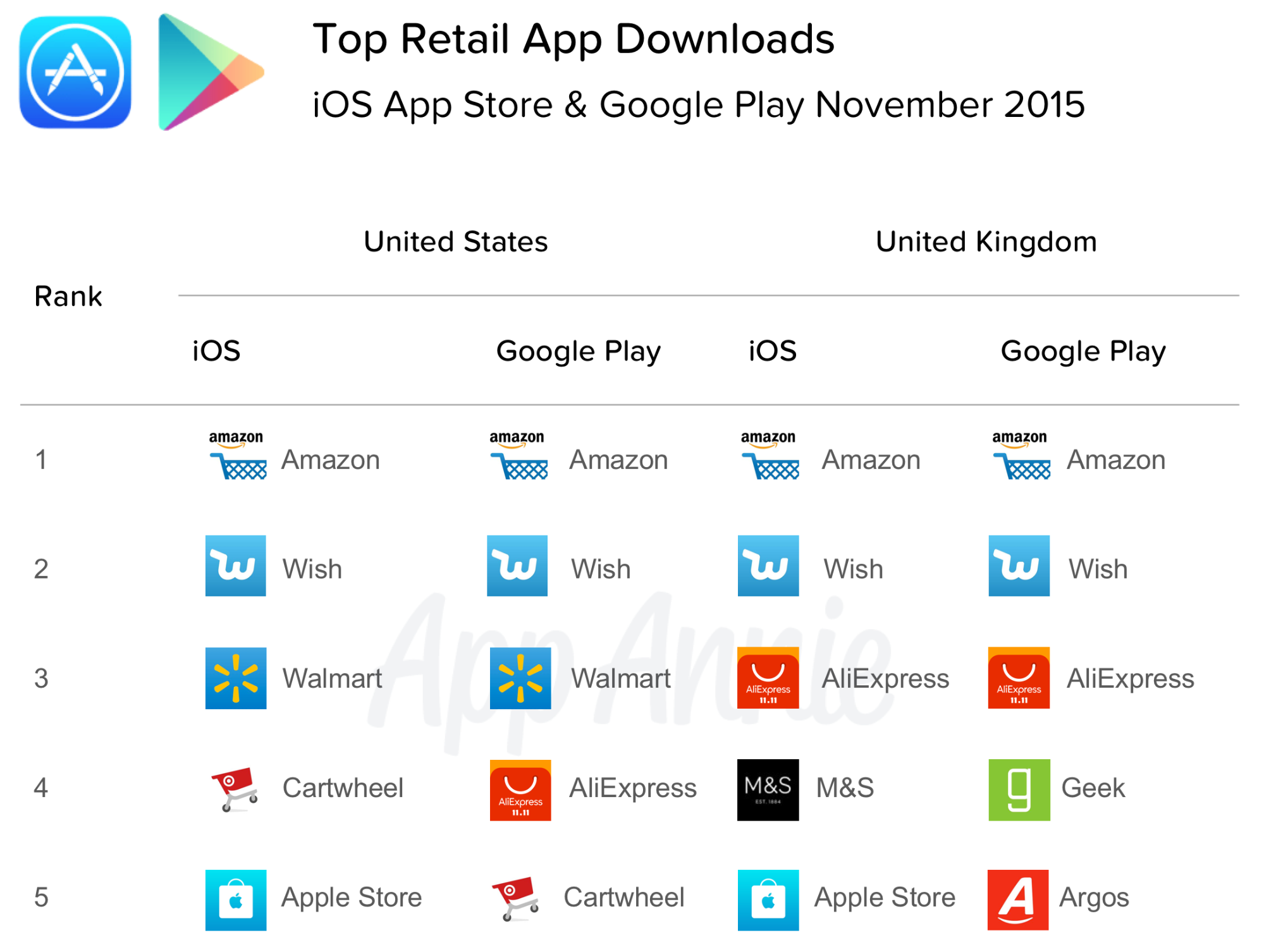 Amazon and Wish topped the download charts on both platforms in the United States and United Kingdom.