HBO’s blockbuster series Game of Thrones returns Sunday, April 14, 2019 for the premiere of the show’s eighth and final season. While fans’ dedication to the show has been unwavering, audiences have evolved their consumption habits and are increasingly turning to mobile to tune in. This transition highlights increasing competition in the video streaming space and the progression of cord-cutting.

App Annie’s mobile market data shows that historically, HBO — including both its HBO GO and HBO NOW apps — has seen significant increases in downloads, revenue and usage correlating to the Game of Thrones (GoT) season premieres. The network provider continues to see a sustained lift in monthly active users (MAU) after each season ends, ultimately growing its active user base over time. 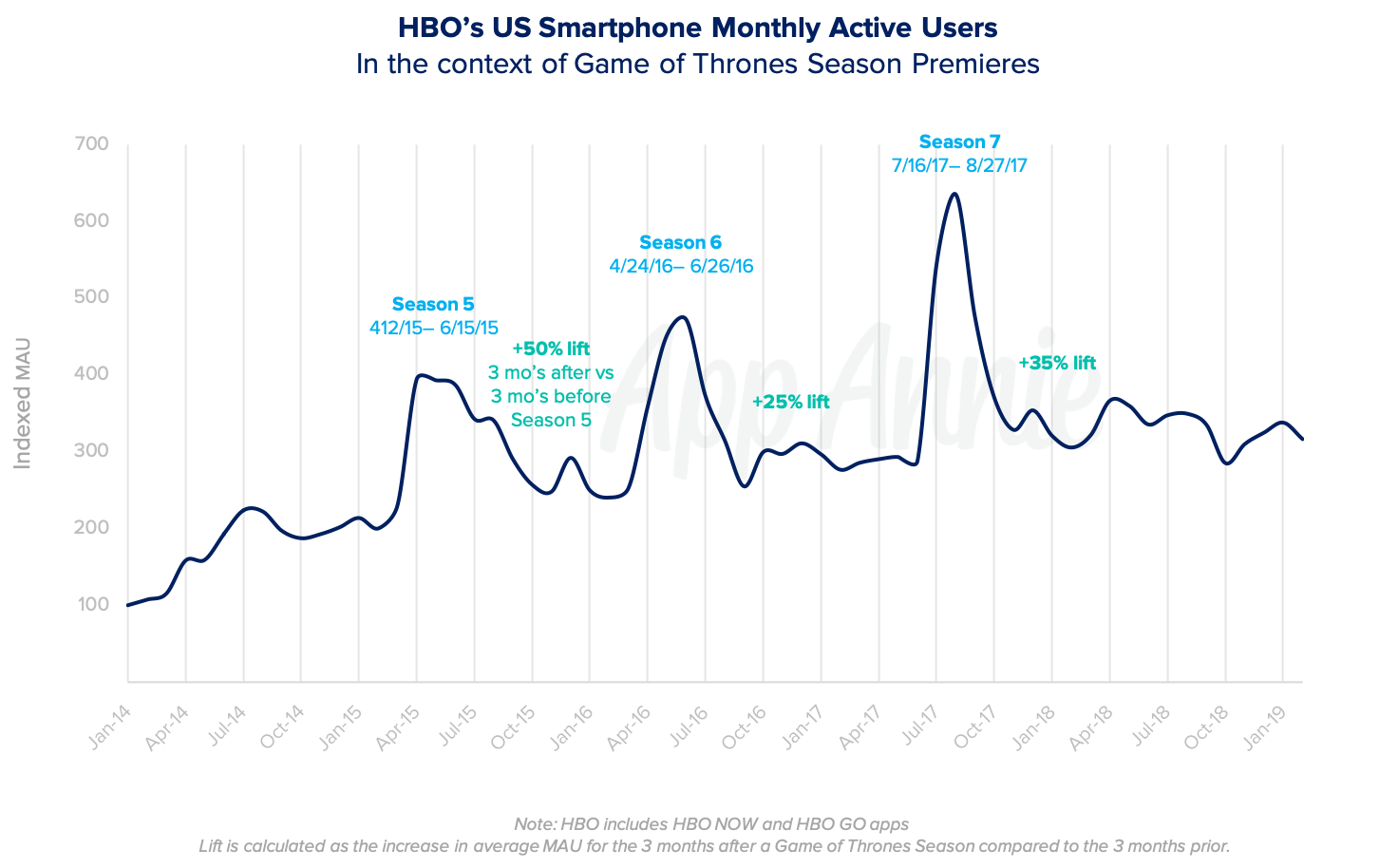 Here are some key GoT Mobile Growth Highlights:

We expect this season to be no different. HBO’s in-app monthly subscription service HBO NOW will likely experience a significant uptick in consumer spend as many viewers have already used their 30 day free trial or will need to renew the second month once expired.

The influence of Game of Thrones on the growth of HBO’s streaming services highlights how original content can be a key component for maintaining a competitive edge in today’s video streaming wars as traditional TV audiences continually move toward cord-cutting. In 2018, HBO NOW ranked #3 in top video apps by consumer spend in the US (only behind Netflix and YouTube).

“The influence of Game of Thrones on the growth of HBO’s streaming services highlights how original content is a key component for maintaining a competitive edge in today’s video streaming wars, especially as traditional TV audiences continually move toward cord-cutting.”

In 2018, $2.2 billion was spent globally on the top five video streaming services — 285% growth from two years prior. Due to the monthly billing structure of most video streaming services, there’s an ongoing battle to offer viewers the most valuable variety of content to increase long term commitments versus one-off seasonal interest in high-demand shows. As Game of Thrones comes to an end this year, we are excited to see what HBO has in store for continuing growth with its captive mobile audience.

HBO isn’t alone in this — content and services are central to a successful business's savvy mobile strategy. Apple’s foray into the video streaming arena with Apple TV+ is a powerful testament to the opportunity of this industry and the pivotal role of mobile to its growth. In 2019, we expect 10 minutes of every hour spent consuming media — across TV and internet — will come from viewers streaming video on mobile. This transition toward mobile video consumption is an important element for streaming services to consider as part of ongoing content strategies.

For more on mobile’s disruption of video streaming, download our 2019 State of Mobile Report:

This is the first blog in our ongoing Mobile Minute series that will feature App Annie’s perspective on how mobile is impacting current events and consumer trends. Tune in weekly for our take on the latest news cycles and how mobile transformation will shape industry outlooks.