Ad blockers have made their way across the mobile web ecosystem, and while users may see it as a boon for usability and connection speeds, advertisers may need to find ways to adapt. Already having history on Android, the latest version of iOS (iOS 9) allows device owners to block ads within Safari. With the web browser making up 22% of global mobile web traffic, estimates of revenue losses are “only” $1 billion USD. Despite this forecast, this may still have a long term effect on ad monetization.

Below, we take a look at which media properties, thanks to their in-app purchase subscriptions, are well positioned to withstand this change in the mobile web advertising landscape.

Before investigating how news apps are tackling this challenge, first let’s take a look at the mobile ad blocking ecosystem. The September 2015 release of iOS 9 included the ability to block ads within Safari. iOS developers can now make extensions that block cookies, pop-ups, images and more. A wide variety of ad blocking apps have hit the iOS App Store, garnering downloads from a large audience. 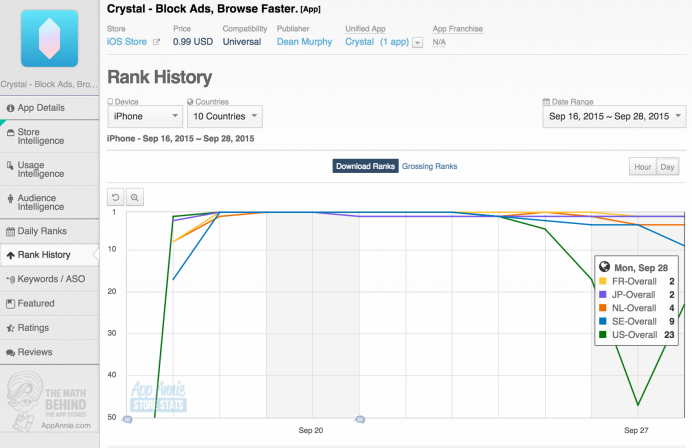 As a leader in sales after the unpublishing of Peace, Crystal was the #1 paid iPhone app in the United States from September 18, 2015 to September 23, 2015. During that time period, the app was also among the top 5 Overall paid iPhone downloads in other countries including Japan, France, the United Kingdom and Spain. In some regions, Crystal’s downloads fell over the weekend of September 26, 2015, but still remains the #2 paid iPhone app in both France and Japan. 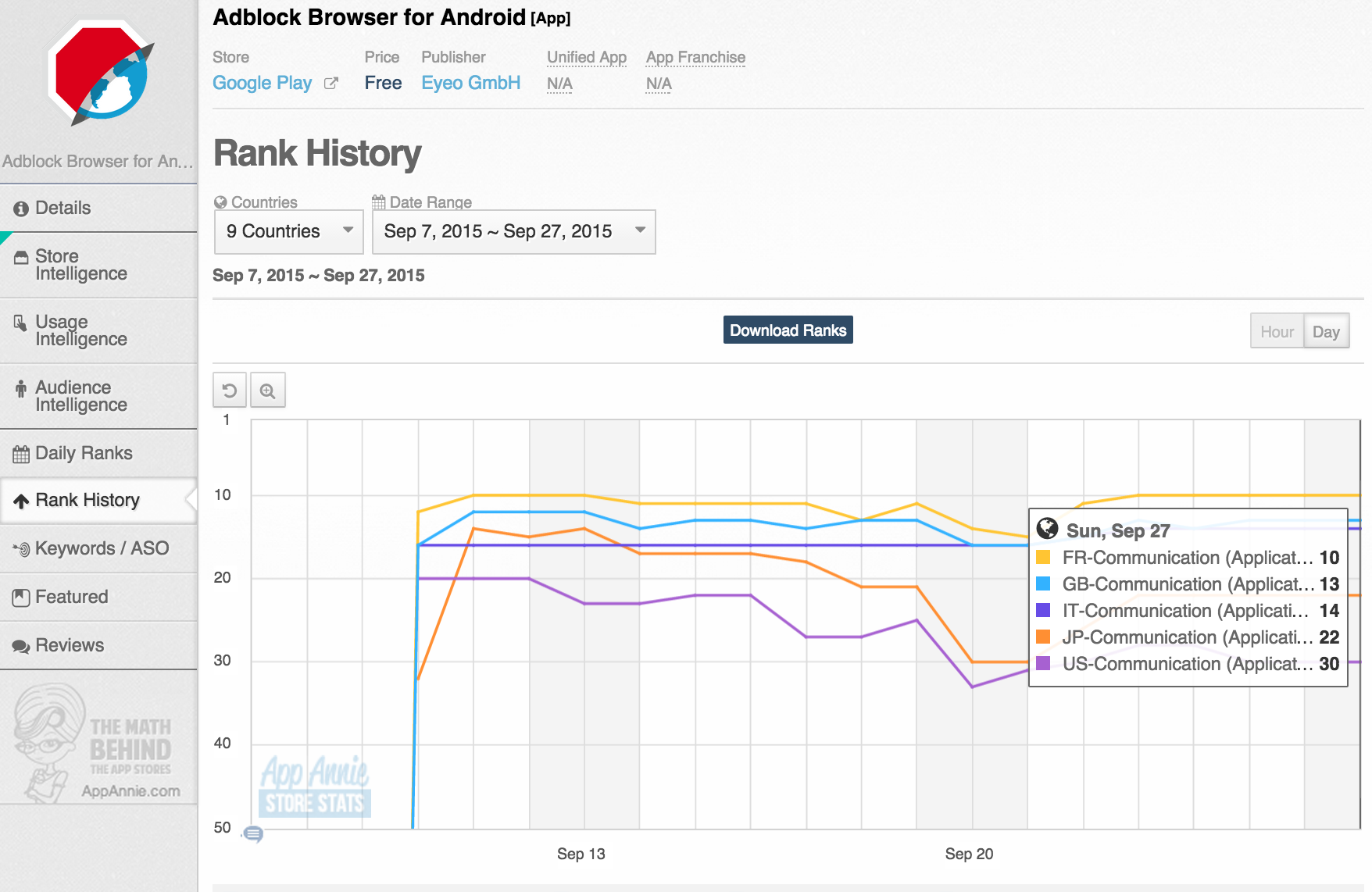 Adblock Browser for Android is a standalone version of Adblock Plus, formerly an extension for Firefox.

With ad blocking apps on the rise, financial experts believe that this may hurt overall ad revenue, which can in turn affect content production for web news. However, there are other ways to monetize a user base, which we’ll explore below. 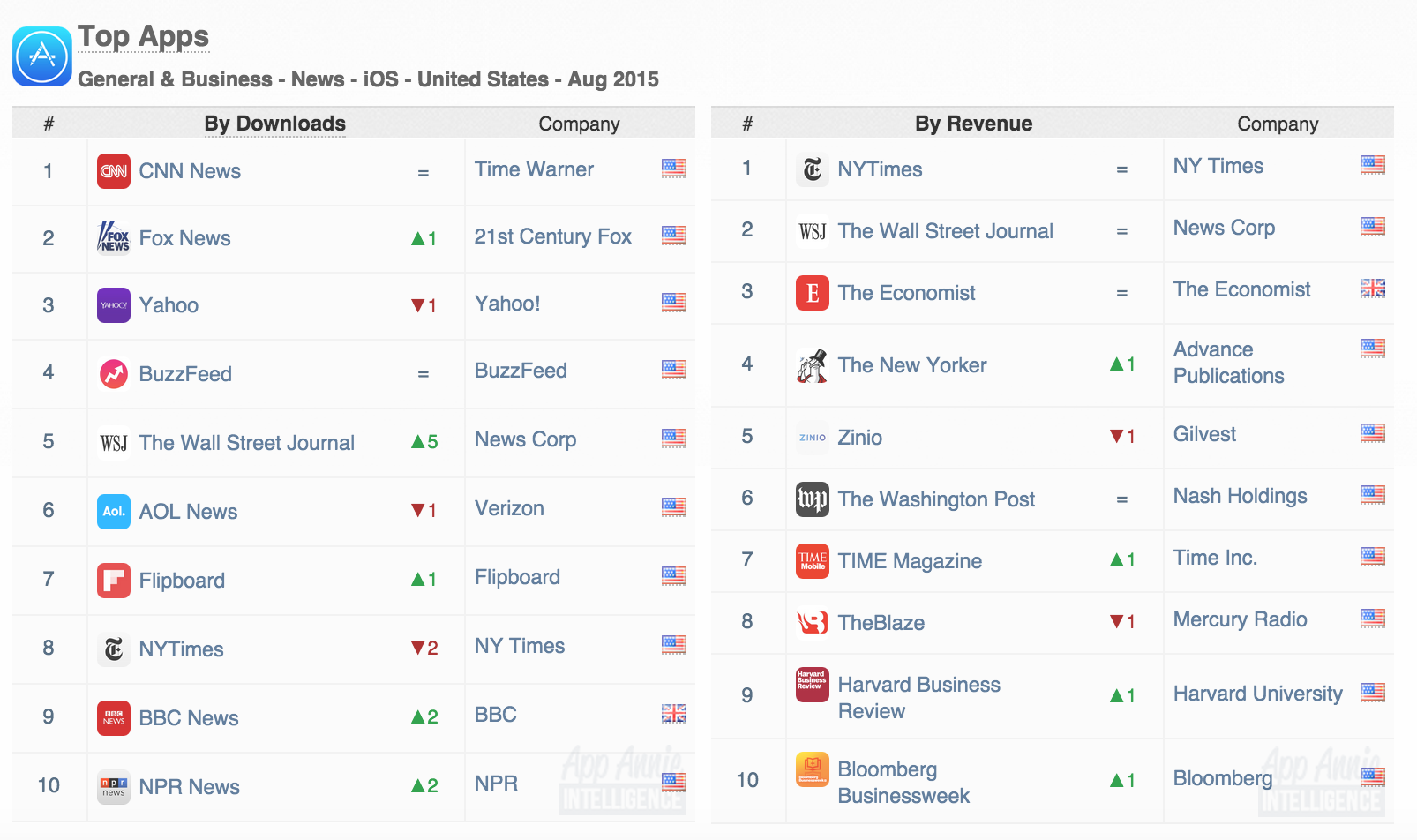 The Wall Street Journal and NYTimes led the United States’ News category in iOS by revenue and downloads for August 2015.

Our August 2015 Index for US News apps showed several apps well-positioned to manage this transition into the era of iOS ad blockers: The Wall Street Journal, New York Times, The Economist and The New Yorker. The former two were also highly ranked by downloads, with The Wall Street Journal rising from #10 in July 2015 to #5 in August 2015. These companies have ways to overcome mobile web ad block with in-app purchases and in-app advertising.

Outside of their already popular main apps, both companies have released new subscriber apps, NYT Now and What’s News. These apps feature articles selected by their respective editorial teams and may have played a part in revitalizing interest in new readers.

On the web and mobile, The Guardian can detect who uses ad blockers and suggests becoming a subscriber.

Focusing on getting users to notice subscription plans is another possible revenue-optimizing strategy and a means of withstanding ad revenue loss. For example, The Guardian automatically detects when readers are using ad blockers and generates a call-to-action banner prompting readers to “Become a supporter today.”

Beyond The Wall Street Journal and The Economist, two more apps targeting the business news segments are topping the charts with both Harvard Business Review and Bloomberg Businessweek hitting #9 and #10 top grossing for a total of 4 apps out of 10.

Predictions for the Ad-Blocked Future

Ad blocking apps are becoming popular with iOS 9 users, much as they have with Android or PC users in the past. Similar to the cord-cutting trend, newsgroups investing in premium content with the goal to convert occasional readers into subscribers may have the best strategy to maintain the growth of mobile revenue streams.

“Given their long-standing subscription models, The Wall Street Journal, New York Times and The Economist are well positioned to gain additional revenue through in-app subscriptions, rather than heavily relying on ad revenue,” said Danielle Levitas, SVP of Research & Analysis at App Annie. “Newsgroups that are delivering great content and targeting audience segments ready to invest in ad-free mobile experiences and those that can drive consumers to their apps have less to worry about with the popularity of ad blockers emerging in iOS 9.”