It hardly needs saying that 2020 was an extraordinary year. Global populations were plunged into a unique experiment, which shifted many of their previously 'analogue' behaviors towards new digital equivalents.

The effect was to drastically increase their time spent in apps. Across 2021, with much of the world easing lockdowns, a new question emerged: would those new habits be sustained?

Now, the numbers are in. And the answer is: pretty much.

Our new data reveals that time spent in apps in Q2 2021 is still significantly up on the pre-lockdown figure (for Q2 2019). 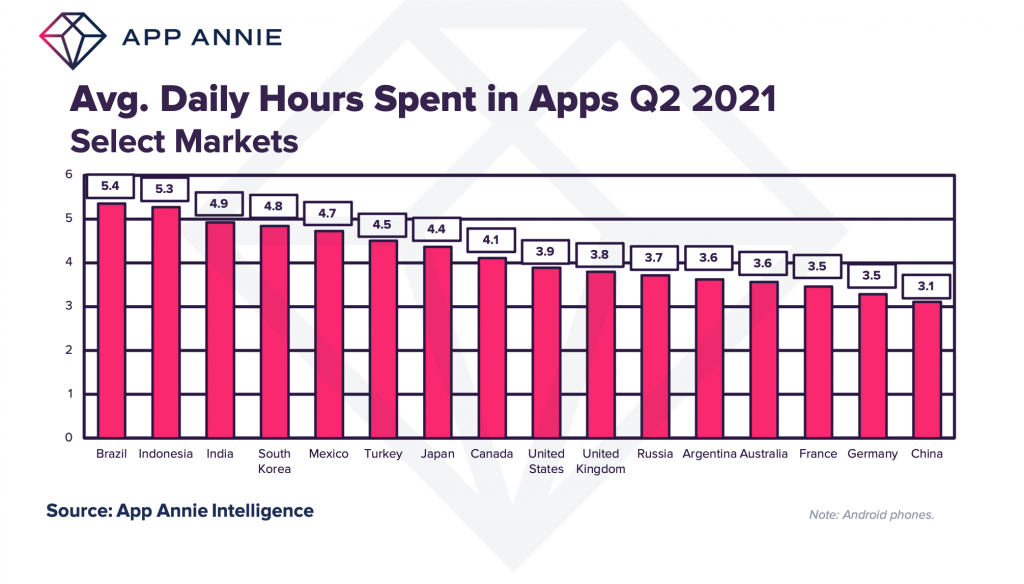 Top of the list for time spent in apps is Brazil, which leapt 30% from Q2 2019 to Q2 2021. Despite a slight fall in the last 12 months, its consumers still spend well over 5 hours a day in apps. It's a similar story for Indonesia, the only other country whose consumers pass more than 5 hours a day in apps. Here the growth rate is up 35% in two years.

In terms of the most growth, the notable markets are Russia and Turkey. Russians today spend 45% more time in apps than they did in Q2 2019. For Turks, it's 40%.

Let's look at the breakout apps benefiting most from the dramatic change in consumer habits. 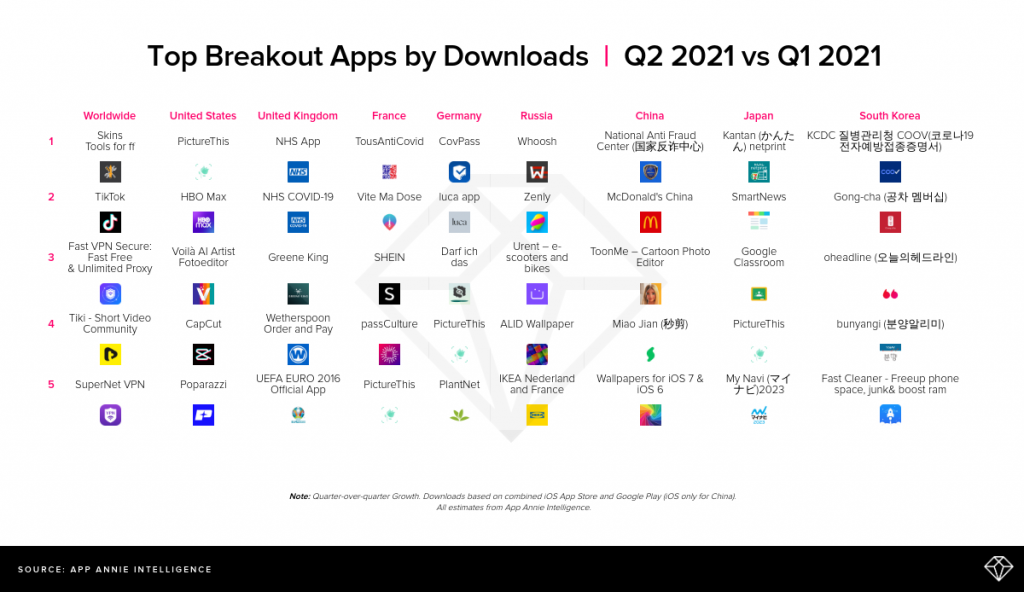 Looking at the US's top breakout apps (those with the most dramatic growth over the previous quarter), it's notable how none has any direct relationship to COVID immunisation or contact tracing (this is not the case in most other countries).

Surprisingly its number one breakout product is PictureThis – an app that lets the user take a photo of a plant in order to identify and find out more information about it. The app, developed by China's Glority, has also been a huge hit in Germany, France and Japan. Perhaps its success is due to a revival of interest in gardening/botany due to the pandemic.

The US's second breakout app is HBO Max. It's the app for the subscription-based streaming service launched by HBO/Warner in May 2020.

HBO/Warner ended March 2021 with 44.2 million domestic subscribers and 63.9 million worldwide subscribers (it does not break out the totals for the existing HBO cable customers and Max subscribers). HBO Max's success reflects the rise of the subscription TV model – and of viewing this content on a mobile device.

Finally, it's worth mentioning Poparazzi at number 5. It’s the social media app of the moment (like Clubhouse and HouseParty before it), and it has real momentum. Poparazzi describes itself as the anti-selfie selfie club. It only lets users take photos of other people, and it doesn't allow filters, follower counts or captions.

The US's breakout games chart as usual reflects the best of the casual games genre. At the top is Hair Challenge by Turkish developer Rollic Games. The game invites players to navigate obstacles and pick up rewards that extend/dye their hair. It is a female-oriented game similar to High Heels, which was a big hit in Q1 2021. 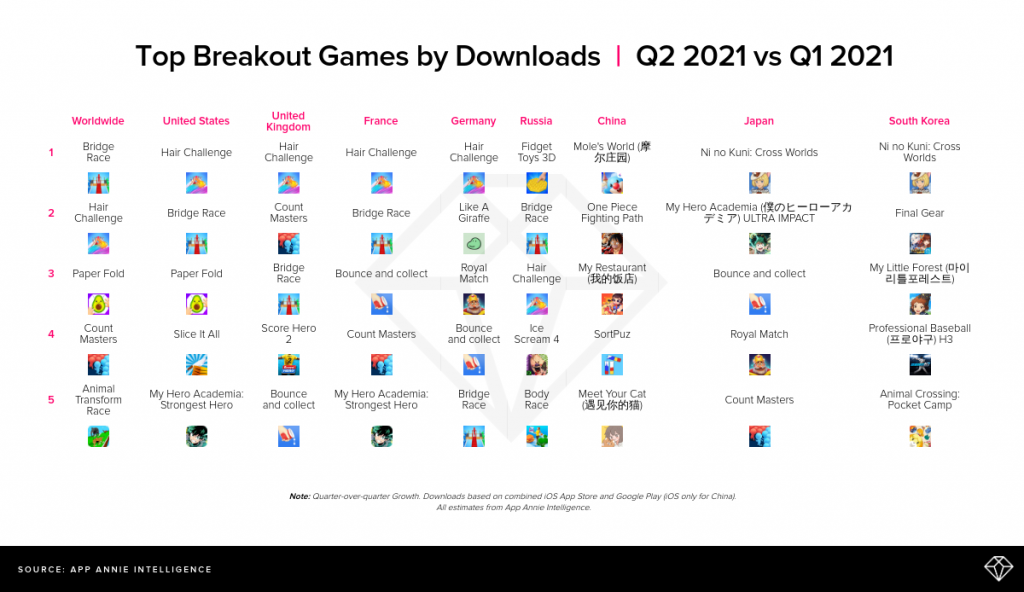 Consumers across the key countries of EMEA increased their time spent in apps by around 30% or more in the two years to Q2 2021. Collectively, however, these countries are towards the lower end of the hourly average. For example, French and German consumers now spend just over three hours a day in apps. This ranks them at numbers 14 and 15 respectively in the 16 regions tracked by App Annie. 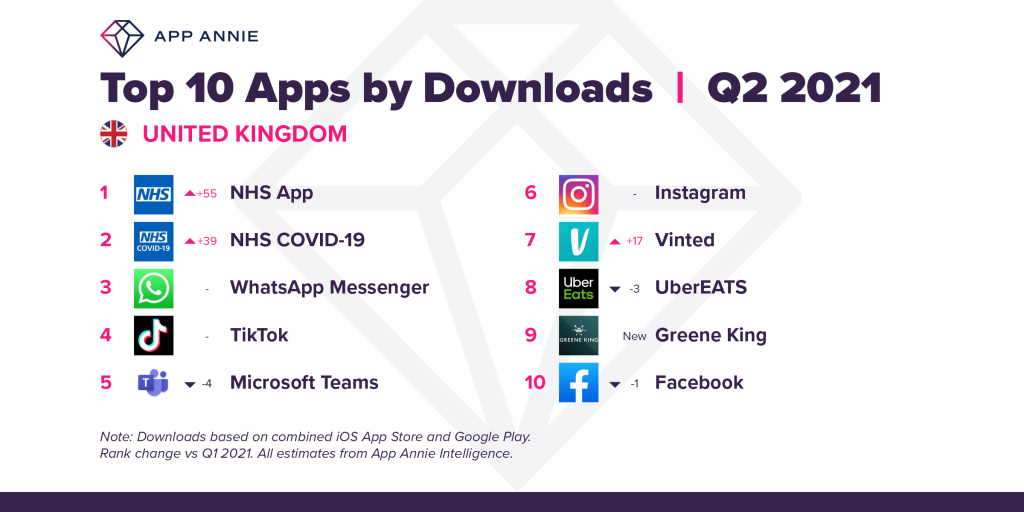 The leading breakout apps in the EMEA countries are dominated by those directly related to the pandemic. They focus on information, immunisation and contact tracing.

The top two apps in UK, Germany and France all fall into this category. CovPass, the top app in Germany, is among the first of a new type of product: the digital COVID-19 vaccination pass. It gives Germans a simple way to prove their status in order to access restaurants, museums and other venues that require proof of vaccination. 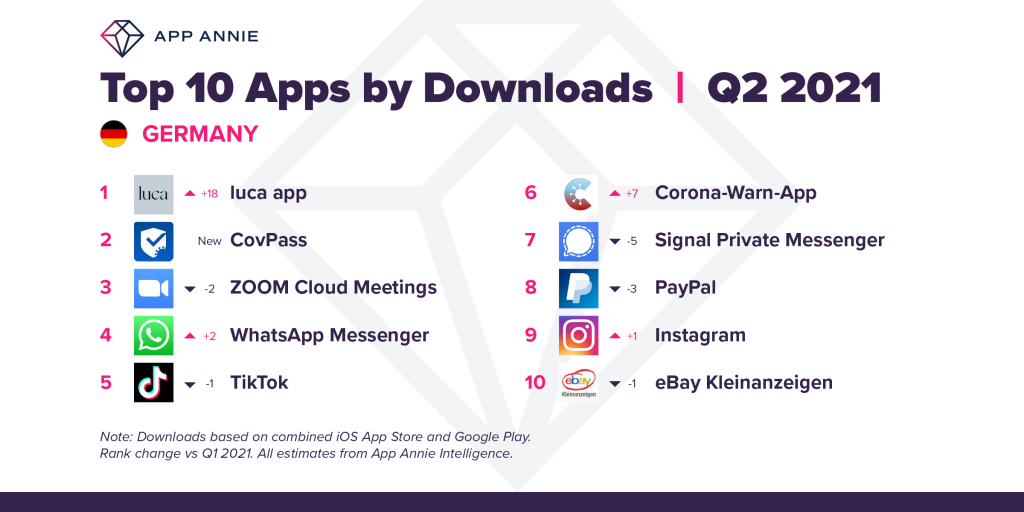 France's number 2 breakout app is another interesting case study. ViteMaDose helps citizens locate medical centres that have free vaccination slots. It sounds like an official government product. But it's not. In fact, it was developed by a 25 year old computer engineer, Guillaume Rozier. 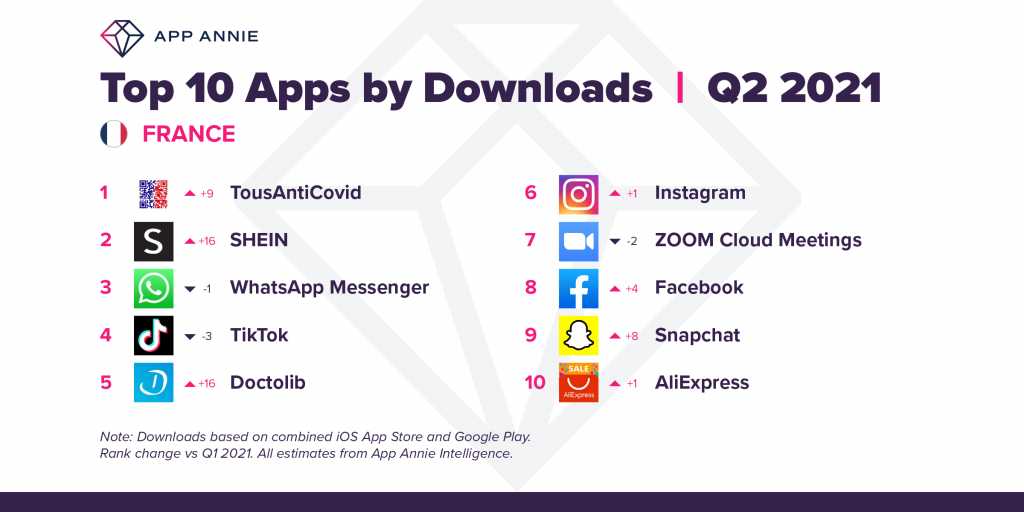 The Russian breakout app chart reflects the huge rise of consumer interest in e-scooters. Russians have rushed to embrace the transport method – possibly as a response to road congestion in the big cities. The market is dominated by two Russian startups: Whoosh and Urent. Their apps appear in the breakout chart at number one and 3 respectively. 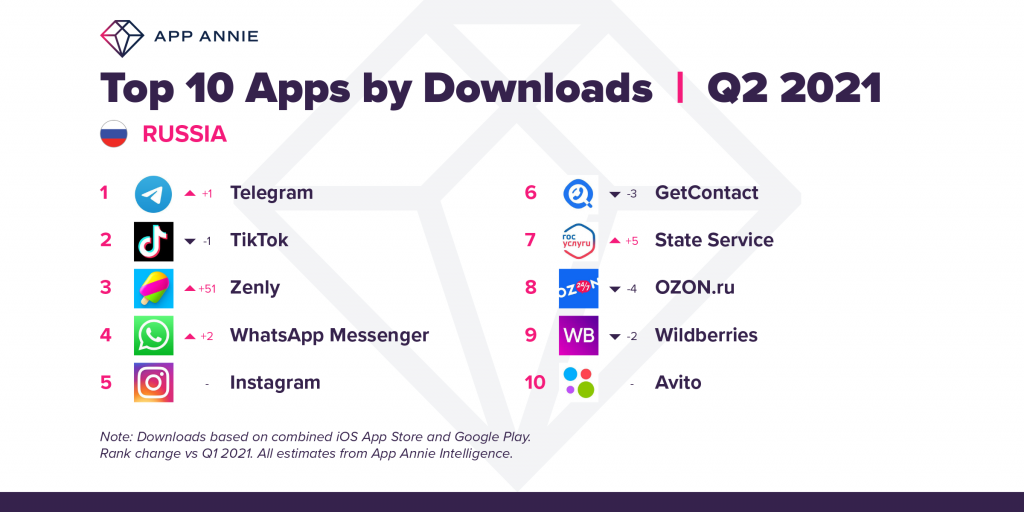 Turning to games, the top title across UK, Germany and France is Hair Challenge (see US section). The other notable product is Supersonic's Bridge Race, which appears at #2 in UK, France and Russia.

In APAC, Ni No Kuni: Cross Worlds Tops Breakout Games Chart for Downloads in Both Japan and Korea

The citizens of APAC countries are among the most committed to the mobile habit – as of Q2 2021. Indonesians come second in the rankings (just over 5 hours a day in apps), with South Korea at 4 (just under 5 hours a day) and Japan at 7 (4.5 hours).

Japanese users flocked to Kantan Netprint, an app that makes it easy to print out or makes PDFs of mobile files. Meanwhile South Korea's consumers made a hit of Gong Cha – the official app of a fast growing tea drink franchise.

The top product in China is National Anti-Fraud Center. It was launched by the Ministry of Public Security in response to a rise in scams based around the Study Xi app. The latter is a product that contains the teachings of the president. Criminals had been hijacking the app to dupe and steal from users.

The most notable games product in APAC over the last quarter is certainly Ni no Kuni: Cross Worlds. It topped the breakout chart in Japan and South Korea. Ni no Kuni is a Ghibli-style role-playing game that made its first appearance on the Nintendo DS in 2010. It launched in June. 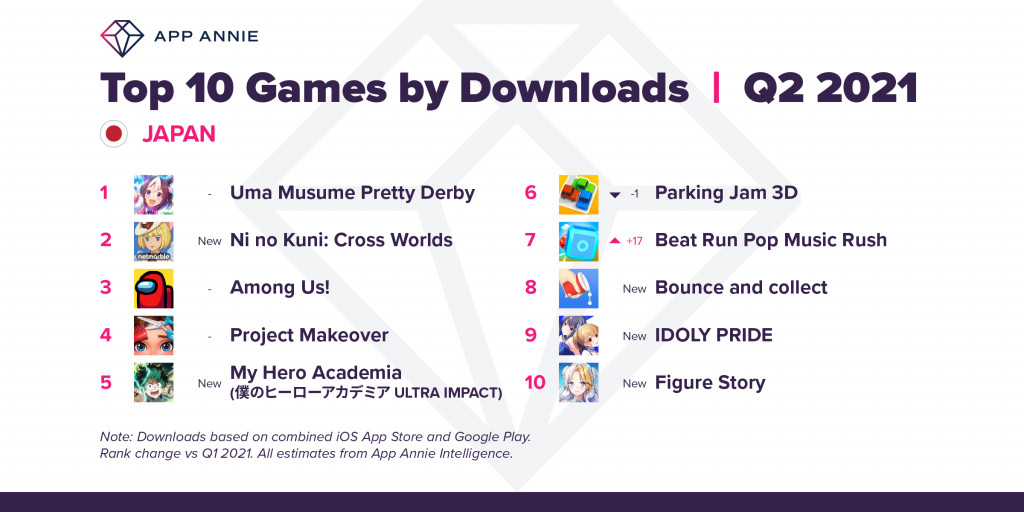 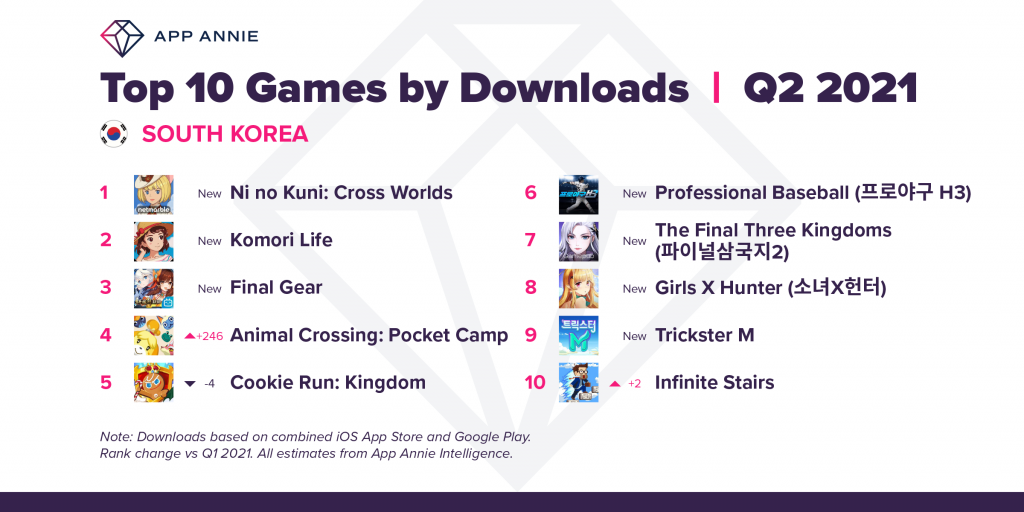 In China, the chart-topper is Mole’s World, created by Taomee Entertainment, and based on a hugely popular web browser game from 2008. 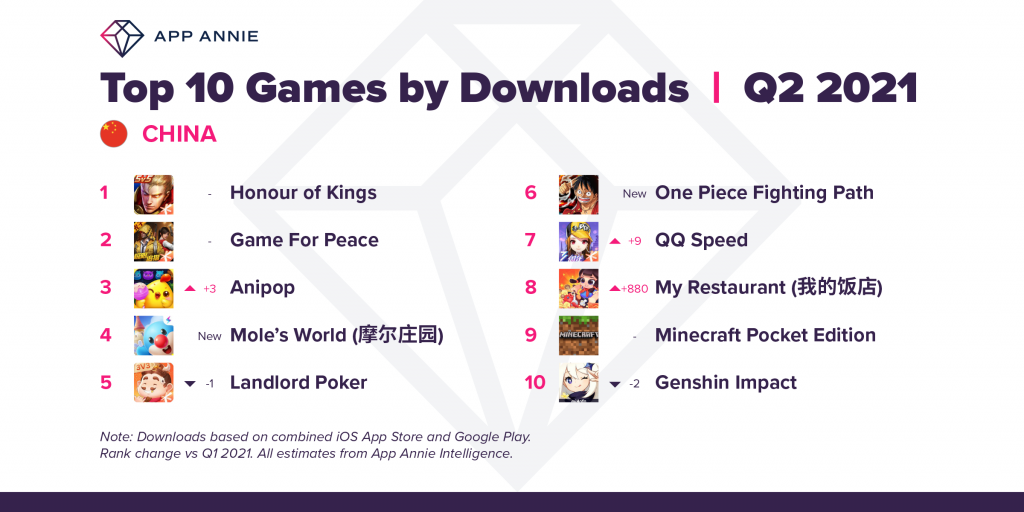 To find out more about the most popular apps and games of Q2 2021 – and their relative performance per regional market – read App Annie’s Q2 2021 Market Index: Top Apps & Games Rankings report now.

A major milestone for the ride-sharing company and an important indicator of shifting consumer priorities.