South Korea has been a leading market in video games for years. Back in the 1990s and 2000s, Korean game developers were strong contributors to the rise of the Massively Multiplayer Online Role-Playing Game (MMORPG) genre in Asia. The popularity of e-sport competitions in South Korea has created a legion of dedicated and skilled professional gamers who, as champions of many worldwide e-sport competitions, became national heroes. South Korea is also a leader in mobile gaming, ranked as the third largest mobile game market. South Korean manufacturers such as Samsung and LG have continued pushing the limits of mobile gaming with their next-gen devices.

App Annie is excited to announce the launch of the South Korea App Annie Index for Games. This report will provide a detailed look at the major movers in one of the app economy’s fastest-growing markets to help inform your business decisions in the region. To find out what’s hot in South Korea in Apps, please check out the South Korea App Annie Index for Apps. For more information on global top apps and publishers, see the full Index charts for September, including newly added charts for other countries.

For the complete list of September’s top apps and publishers in South Korea, click the chart above. 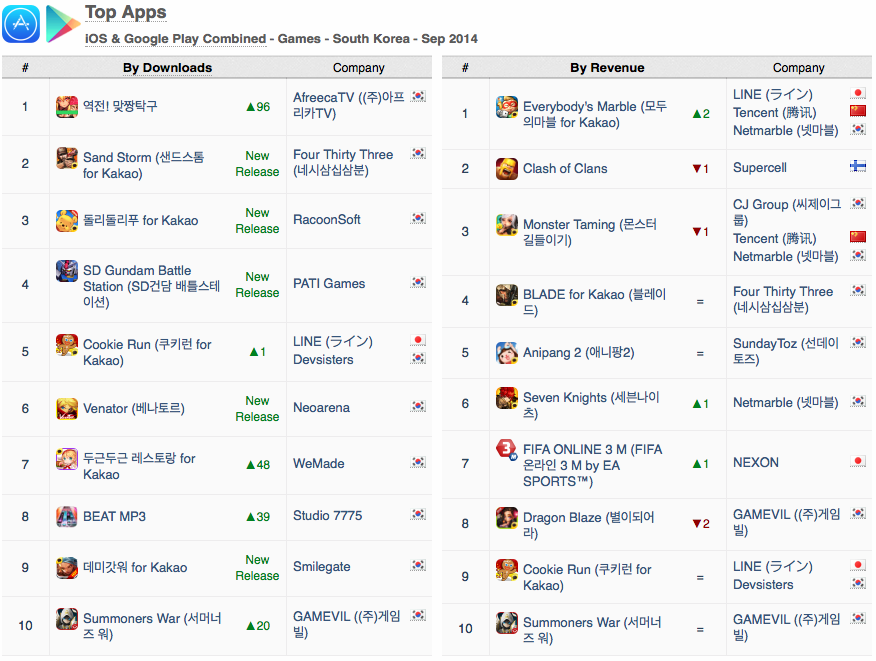 South Korea is arguably one of the most competitive mobile gaming markets in the world. Among the iOS top 10 games by September downloads, four were new releases and three shot up the charts to reach the top 10. The market is even more volatile on Google Play -- not a single game in the September top 10 download rankings appeared in August’s top 10.

Traditionally, Korean game publishers have promoted their games using pre-registration, online ads on Facebook or Naver, outdoor ads in metro stations, or TV commercials, which are very expensive for independent developers and large publishers alike. However, messaging apps have become an increasingly important source for acquiring and retaining mobile customers, given the communicative nature of smartphones and their network effects. In Asia, WeChat, LINE and KakaoTalk are key established channels for increasing game discoverability. All three apps include a feature tab (namely WeChat Games, LINE Game and KakaoGame) to expose players to games and increase user trials. 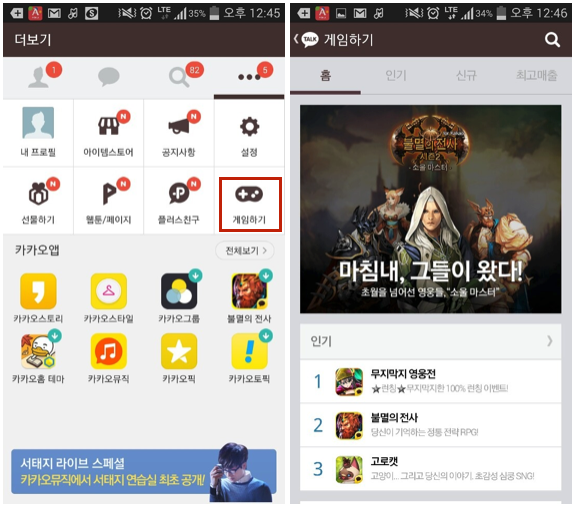 KakaoGame is a feature tab in KakaoTalk, surfacing games to its 20 million KakaoGame monthly active users.

While Tencent and LINE have adopted a vertical integration strategy towards game publishing, Kakao differs significantly by only providing an open platform to help game discoverability. Tencent and LINE have typically bought out game licenses or directly invested in developers, published the games themselves, and maintained control over live operations by deploying their own operations and marketing teams. But on KakaoGame, all games are published and operated by the publisher themselves, with KakaoGame charging a percentage of revenue to surface games to their user base. Also, Kakao’s publisher relationships are not exclusive -- you may see a “For Kakao” and a “Regular” version of the same game simultaneously in the Korean iOS or Google Play app stores. 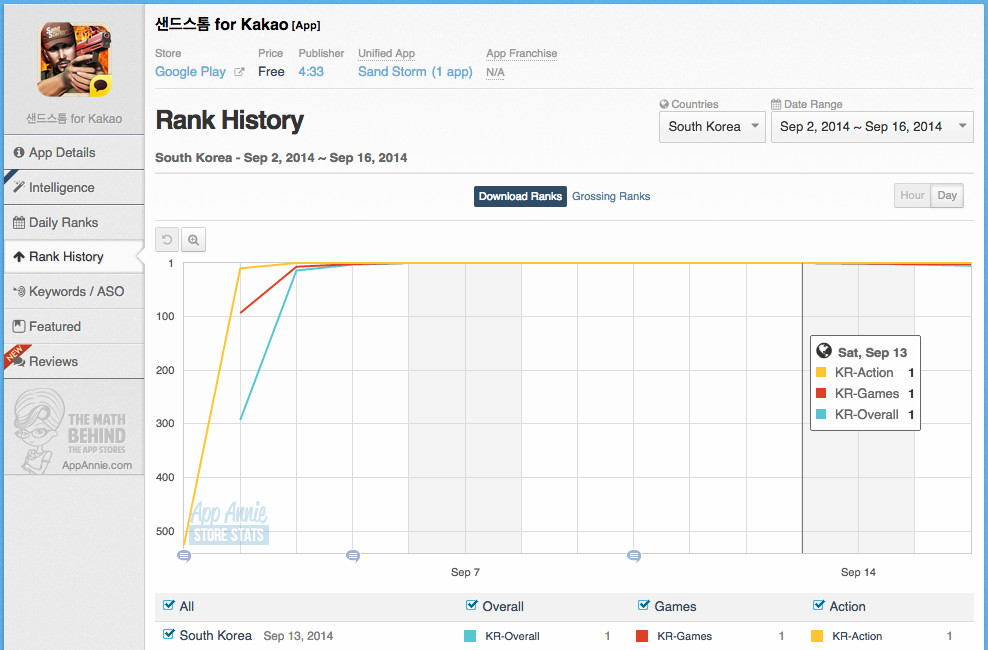 Released on September 2 on KakaoGame, Sand Storm (샌드스톰 for Kakao) rapidly climbed to #1 overall in Google Play Korea and held the rank for nearly two weeks.

In its press release to celebrate KakaoGame’s two-year anniversary on July 22, Kakao announced that KakaoGame had more than 20 million monthly active users and collected approximately $560 million USD in total sales for the first half of 2014. KakaoGame finished September with three and five games in the top 10 by downloads on both iOS and Google Play, respectively. KakaoGame was even stronger in terms of revenue, with seven games in both iOS’ and Google Play’s top 10 charts. KakaoGame’s great September performance reflects the company’s ability to drive discoverability and monetization.

In August 2014, two long-term Korean game giants, CJ Netmarble (the gaming division of CJ Entertainment & Media) and CJ Games announced a merger to become Netmarble Games Corporation, effective on October 1. The newly formed company would immediately become the #1 publisher in terms of game revenue on iOS and Google Play combined. In September, CJ Netmarble and CJ Games had three games in September’s top 10 games by revenue for both iOS and Google Play.

Their portfolio of games was headlined by Everybody’s Marble, Monster Taming, and Seven Knights. Released in summer 2013, Monster Taming and Everybody’s Marble dominated the KakaoGame platform, finishing as the #1 and #2 games by cumulative revenue from July 2013 to September 2014 in South Korea. CJ Netmarble and CJ Games also carefully selected top partners in key markets to further monetize those titles overseas. In China, both Monster Taming and Everybody’s Marble are operated by Tencent and have consistently performed well. In Japan, Indonesia and Thailand, Everybody’s Marble is licensed to LINE, which made extensive changes in order to localize the game for some markets. The game has frequently ranked  in the top 3 by monthly revenue in Indonesia and Thailand, and even claimed top honors at the Thailand Game Show Big Festival 2014. 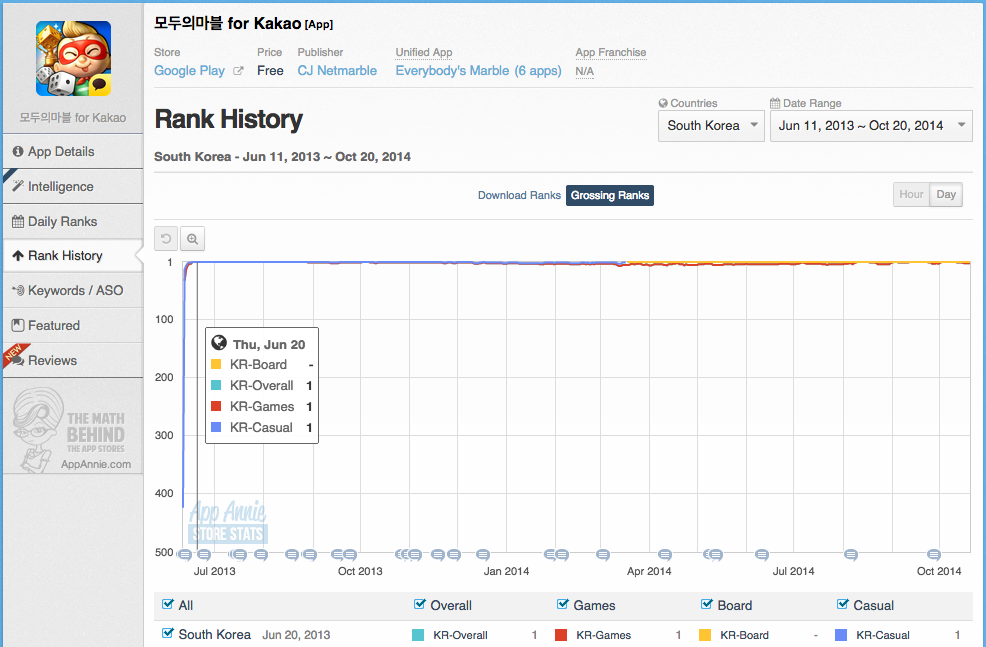 Everybody’s Marble has enjoyed a steady stream of revenue since June 2013. 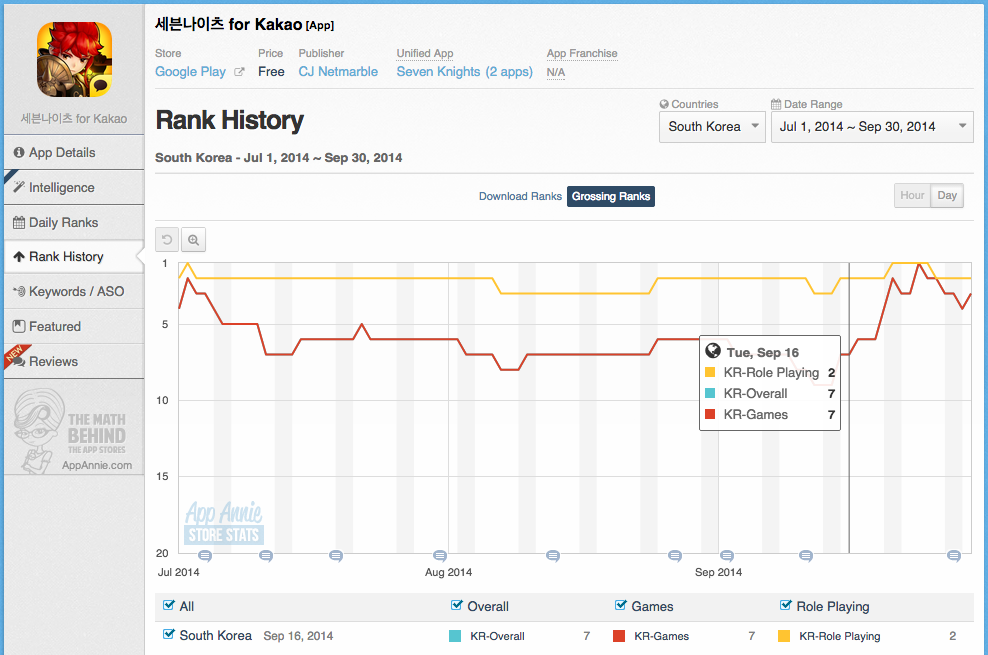 Released in April, Seven Knights secured a seat among the top 10 earners.

The Sky's the Limit for Summoner’s War

Another critical merger in South Korea’s mobile game industry was Gamevil’s acquisition of its long-term rival Com2uS in October 2013. This merger was considered a win-win situation for both companies -- it combines Com2uS’ strong creativity and technical ability in game development with Gamevil’s outstanding business analytics in live game operations, investment in 3rd party developers and expansive global footprint.

Summoners War was a beneficiary of this merger. It launched on Hive in April 2014, the merged company’s new platform which integrated the legacy Com2uS Hub and Gamevil Live, and rapidly gained a significant user base in South Korea, Japan, United States, China, Taiwan and other markets. Revenue followed shortly -- in South Korea, Summoners War has been among in the top 10 games by combined iOS and Google Play revenue for three consecutive months since June, which is pretty impressive for a game released in April. 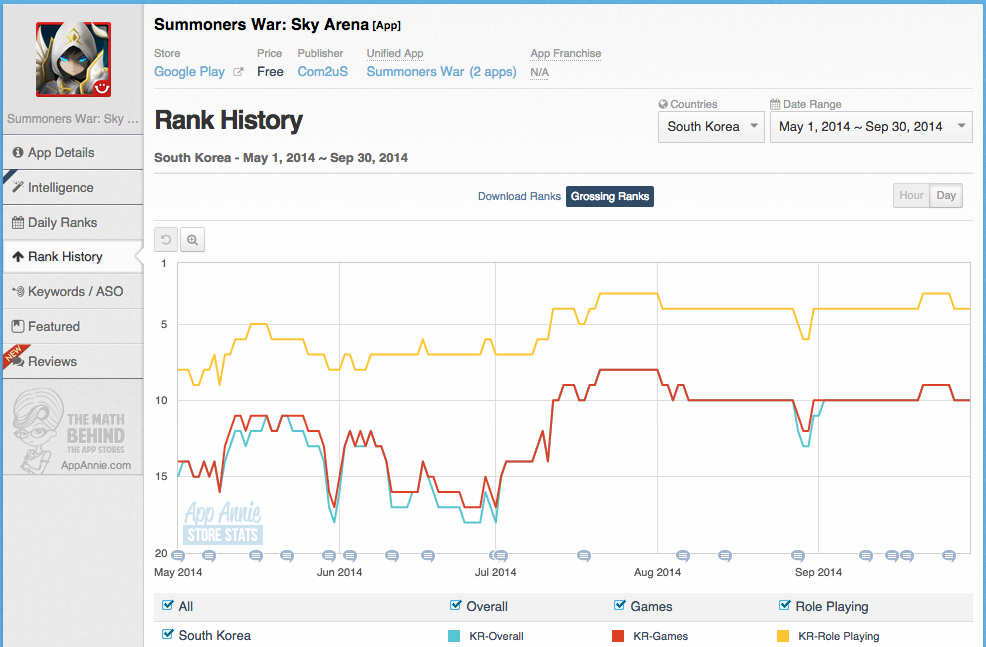 Launched in April, Summoners War quickly moved into the top 20 by revenue on Google Play and progressed to the top 10 in July.

Summoners War’s most important innovation was its city-building gameplay system. As we mentioned in the Japan App Annie Index for Games, city-building features strengthen gameplay depth by increasing the amount of things players can “work on” to increase their in-game strength. It also creates in-app purchase opportunities for the publisher. In addition, the cities served as personal spaces for co-players to visit, setting the foundation for social features in the future. Other hits like The White Cat Project (白猫プロジェクト) followed this trend. We may see this system adopted by content-heavy games in the future.