The App Annie UK Index for Apps details the hottest mobile app properties outside of games for both the iOS App Store and Google Play. To find out what’s hot in the UK in games, please check out the UK App Annie Index for Games. For more information on top apps and publishers around the world, see the worldwide, United States and China charts for June. 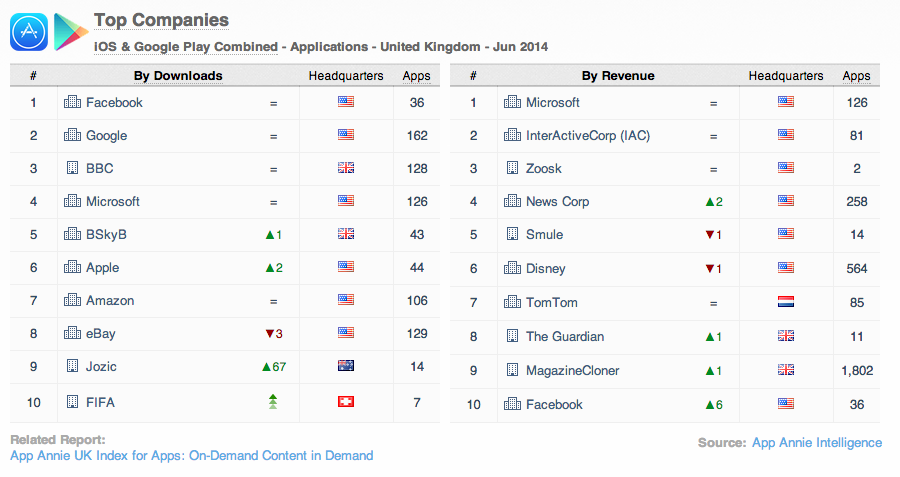 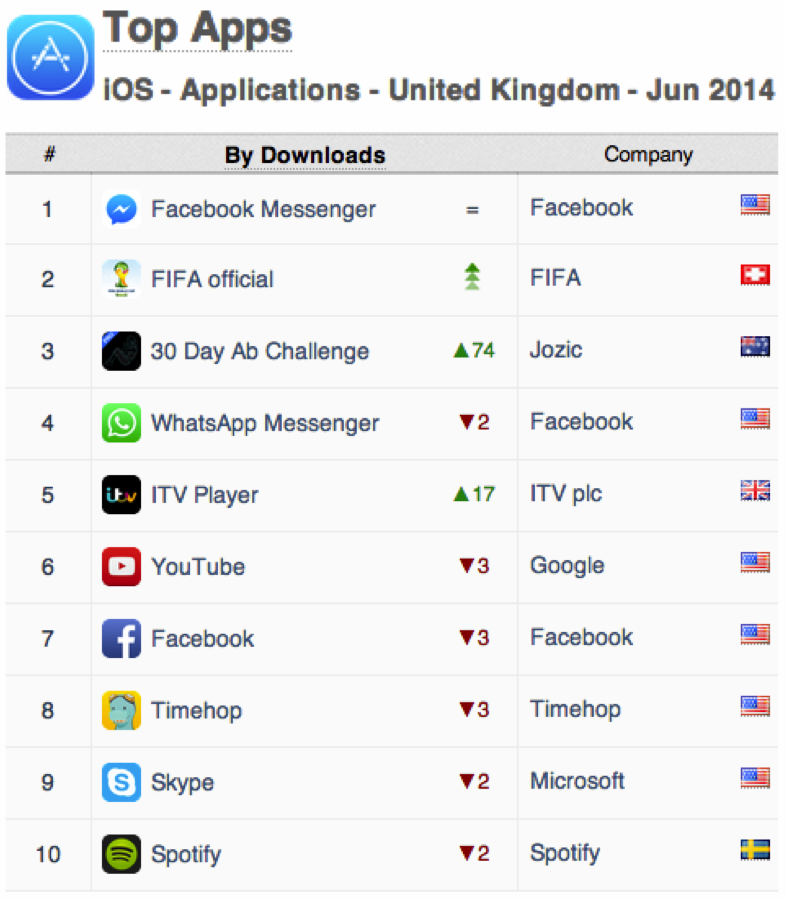 Football fever gripped much of the world during June, and the UK app stores were no exception. The FIFA World Cup appears to have provided a significant boost for broadcaster apps, with ITV Player making the most notable gains. The app offered live streaming and on-demand coverage of the World Cup and moved up the download ranks rapidly on both iOS and Google Play as the event kicked off mid-June. 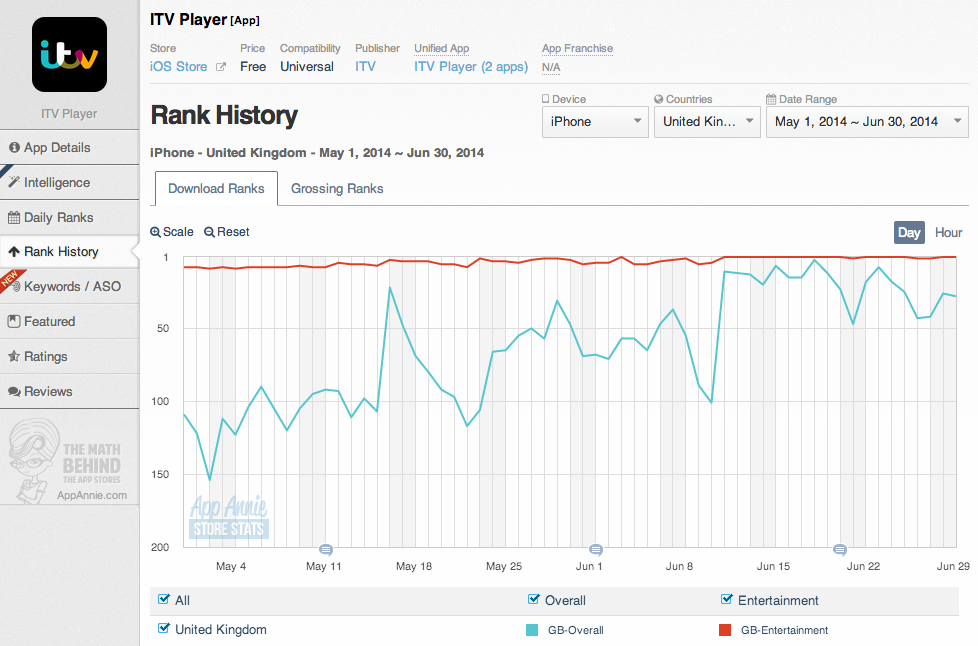 ITV Player saw a jump in download ranks as the World Cup kicked off on June 12.

Outside the World Cup, publishers providing video content occupied strong positions in the UK rankings. Major broadcasters the BBC and BSkyB both feature in the Top 10 publishers by monthly downloads outside of games on the iOS App Store and Google Play. Leading apps for the BBC include BBC Media Player, which handles video playback of BBC’s mobile browser-based content, and BBC iPlayer, its streaming and on-demand video player. Similarly, BSKyB's Sky Go app provided on-demand video for users and was a major contributor for the publisher on both stores. 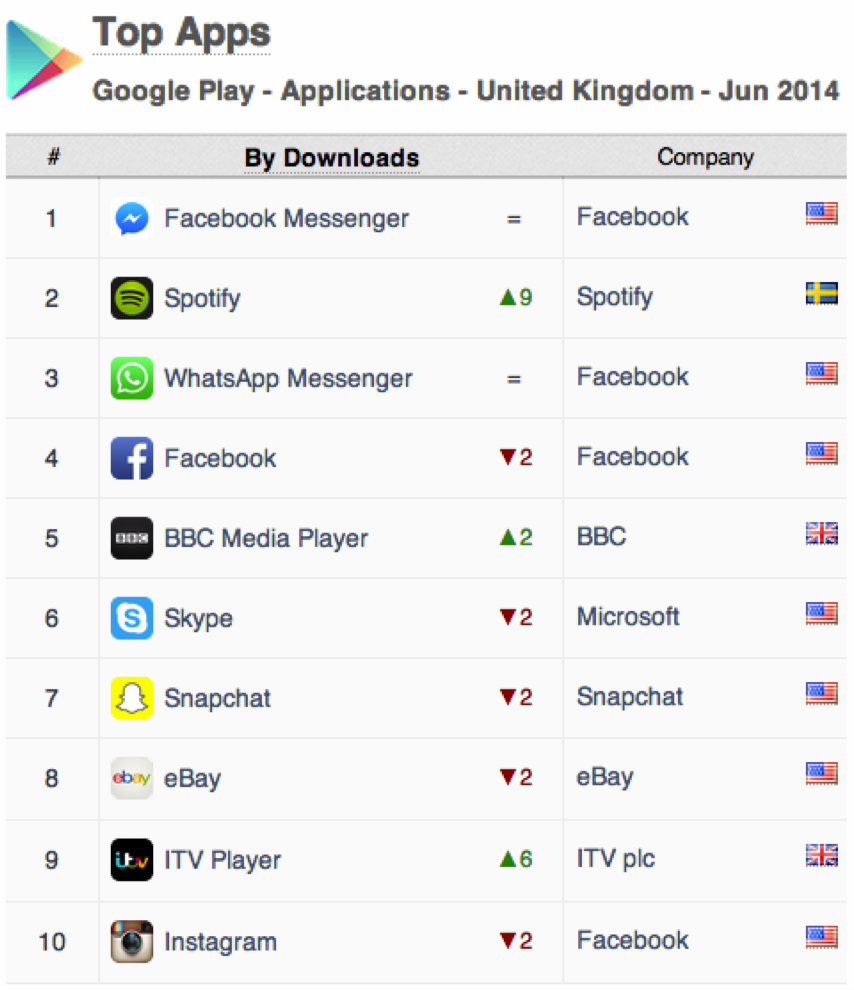 Spotify shot up the Google Play download rankings in June, making it a strong month all- around for digital media consumption apps in the UK. Its gains came after prompting users to upgrade to its new Android app in late May. Spotify remained in the top ranks for downloads in the UK throughout June. This is a positive sign for continued growth for Spotify, having announced that it surpassed 10 million paid subscribers and 40 million active users worldwide in late May. 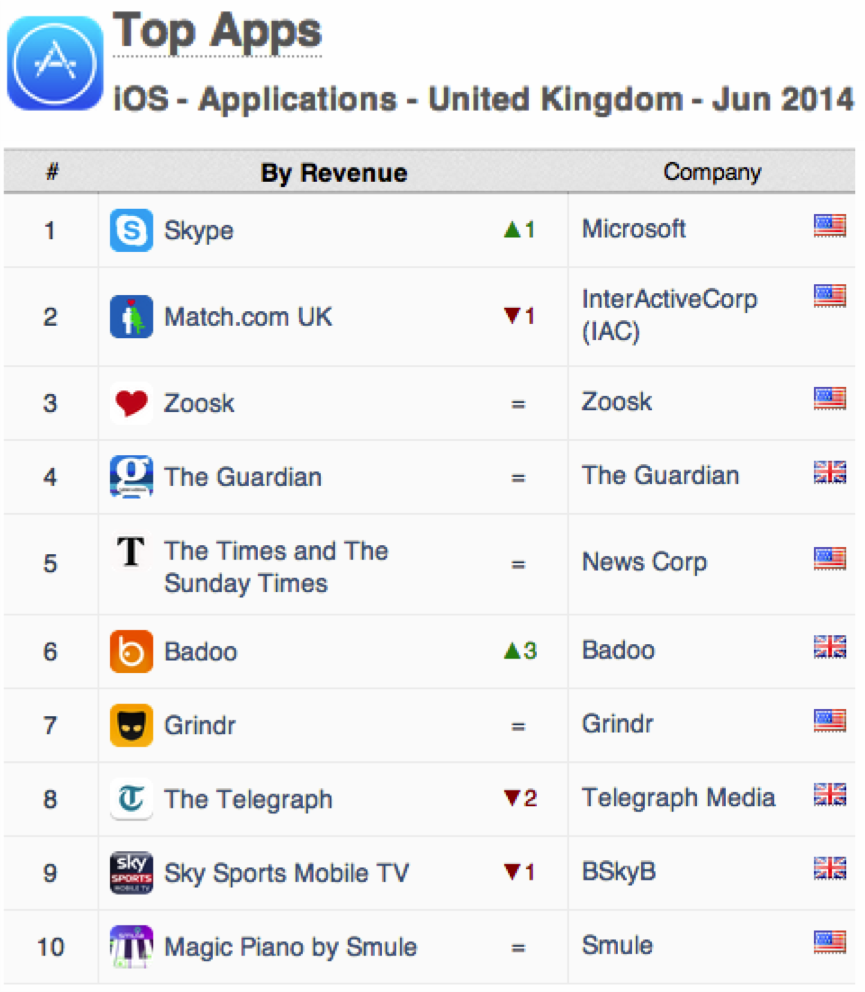 June’s Top 10 apps by monthly iOS revenue outside of games in the UK featured apps from three major British newspapers — The Guardian, The Times and the Sunday Times, and The Telegraph. In addition, The Guardian and News Corp both featured in the Top 10 publishers by iOS revenue outside of games for the month. This demonstrates that newspapers in the UK, like those in the US, are clearly embracing mobile as a distribution channel.

Around 40% of The Guardian’s digital traffic now comes from mobile devices. The publisher will be hoping to increase this further as The Guardian made considerable gains in downloads recently with the release of a substantial update in late May. According to the publisher, this update has netted a total of 300,000 new downloads worldwide, which it will hope to convert to increased revenue through the app’s subscription model. 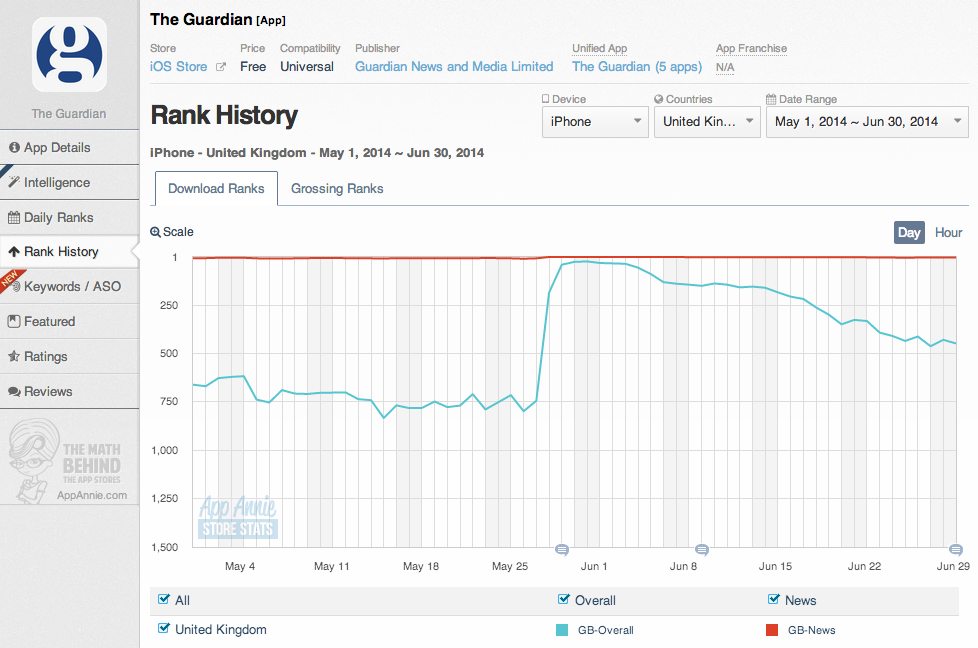 The Guardian shot up the rankings after the release of a major app update. 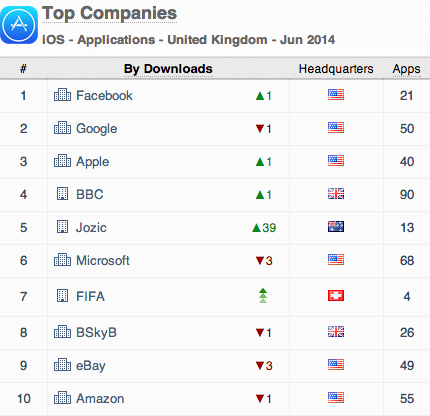 The weather may not have shown it, but apparently summer arrived in the UK in June. Making the most of UK users who want to lose a few pounds for the season, fitness app publisher Jozic leapt up the UK iOS download rankings in June. Jozic’s rise was aided by a number of apps including 30 Day Squat Challenge and 30 Day Push Up Challenge, but the biggest contributor was 30 Day Ab Challenge. The app saw a remarkable boost in late May as 30 day fitness challenges gained attention elsewhere online, including a prominent post on Reddit. These gains appear to have had a positive effect on app store search performance, further increasing exposure for the app and keeping it near the top of the rankings throughout June. 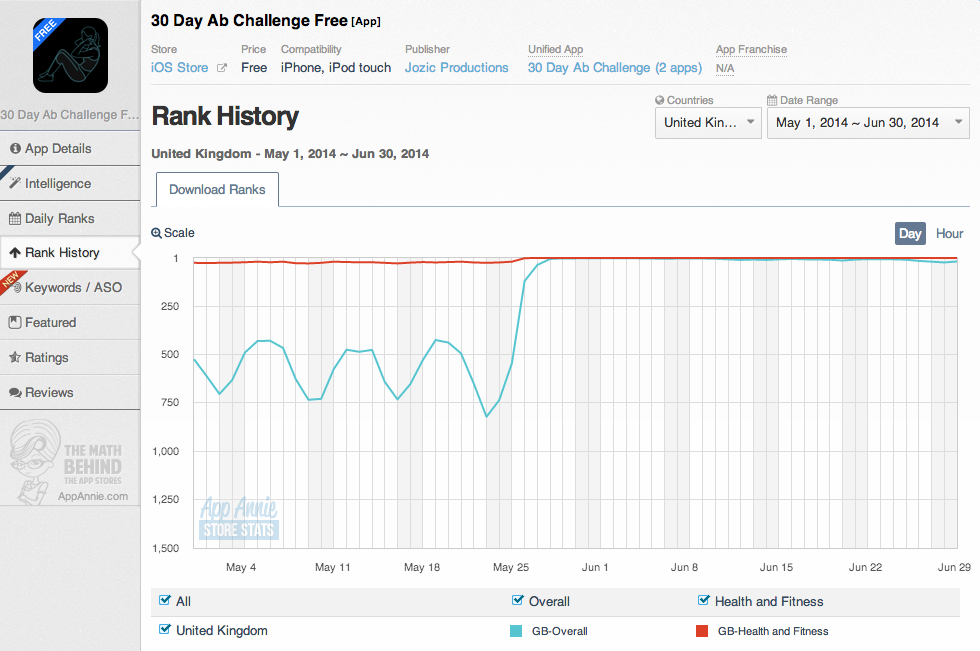 Navigation Apps Maneuver Their Way Up the Charts

TomTom’s navigation apps proved a hit in the Google Play UK revenue rankings in June, with the Europe and UK & Ireland versions rising up the charts. Both received substantial price reductions in late May which lasted throughout June, contributing to their ascent. In general, the UK represents a strong market for navigation apps. TomTom and Trimble Navigation featured in the Top 10 Google Play publishers by UK revenue outside of games in June. TomTom also held its position in the Top 10 iOS publishers by UK revenue outside of games.

Two security apps, Antivirus Security and Norton Mobile Security, retained positions within the UK’s Top 10 Google Play apps by monthly revenue in June. In contrast, there were no security apps in the Top 10 Google Play apps by monthly revenue in the United States or worldwide. During the month, AVG Antivirus saw a significant rise in its daily revenue and download rankings. This occurred just as malware and security issues hit the headlines following an alert from the National Crime Agency of a two-week window to take action against serious malware threats.

For those of you who also are looking for an update on top apps in gaming, please check out our UK App Annie Index for Games. To keep up-to-date with all the changes at the top of the app and publisher charts, check out the complete set of App Annie Index tables.