The App Annie UK Index for Games details the hottest mobile game properties in the United Kingdom for both the iOS App Store and Google Play. To find out what’s hot in other apps outside of games, please check out the UK App Annie Index for Apps. For more information on top games and publishers around the world, see the worldwide, United States and China charts for June. 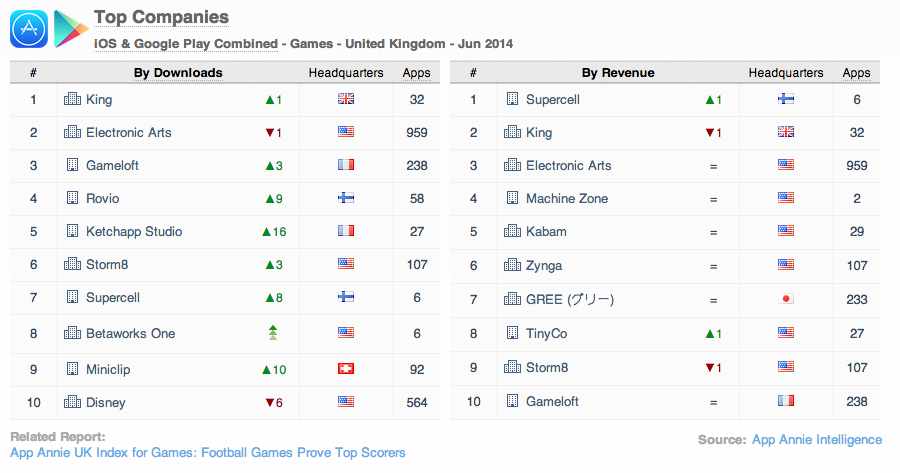 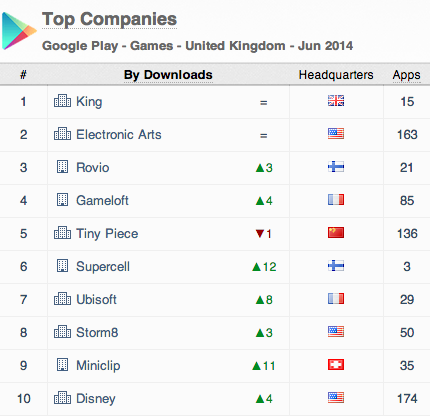 The FIFA World Cup was a huge event for mobile apps, and also saw the UK’s mobile gamers take to their devices to emulate (or hopefully better) their heroes. The big winner in June was Miniclip’s Soccer Stars. The table football game was released in early June, reaching the Top 10 iOS games downloads for the month. It also contributed to Miniclip’s rise in the Google Play publisher download ranks. The game was featured on the home page of both the iOS App Store and Google Play around kickoff of the World Cup. Miniclip’s Head of Mobile, Sergio Varanda, gave App Annie some insight into its success:

“We are delighted to see that Soccer Stars™ has been so popular – with head-to-head matches taking just a couple of minutes to complete, the app proved to be the game of choice for the downtime between World Cup games. We saw clear peaks of activity during half-time and pre/post-game. Soccer Stars™ was released just before the start of the World Cup and enjoyed the swell of hype around the tournament. This led to [!the!] featured on the iOS App Store and Google Play, which saw rapid growth among our player base.

We also cross-promoted Soccer Stars™ on our website Miniclip.com, from which we were able to drive huge numbers to the app page. Combined with the popularity of the game on our social media channels, this really emphasized the huge appetite among our players for casual multiplayer experiences. The success of Soccer Stars™ also saw an increase in engagement with 8 Ball Pool™, giving further evidence that cross-promotion of games within your own network is not a zero-sum game and that our audience is willing to engage with multiple games at the same time. Leveraging our existing fan base to drive engagement with our other games is something Miniclip has been doing well since 2010.” --Sergio Varanda, Head of Mobile at Miniclip 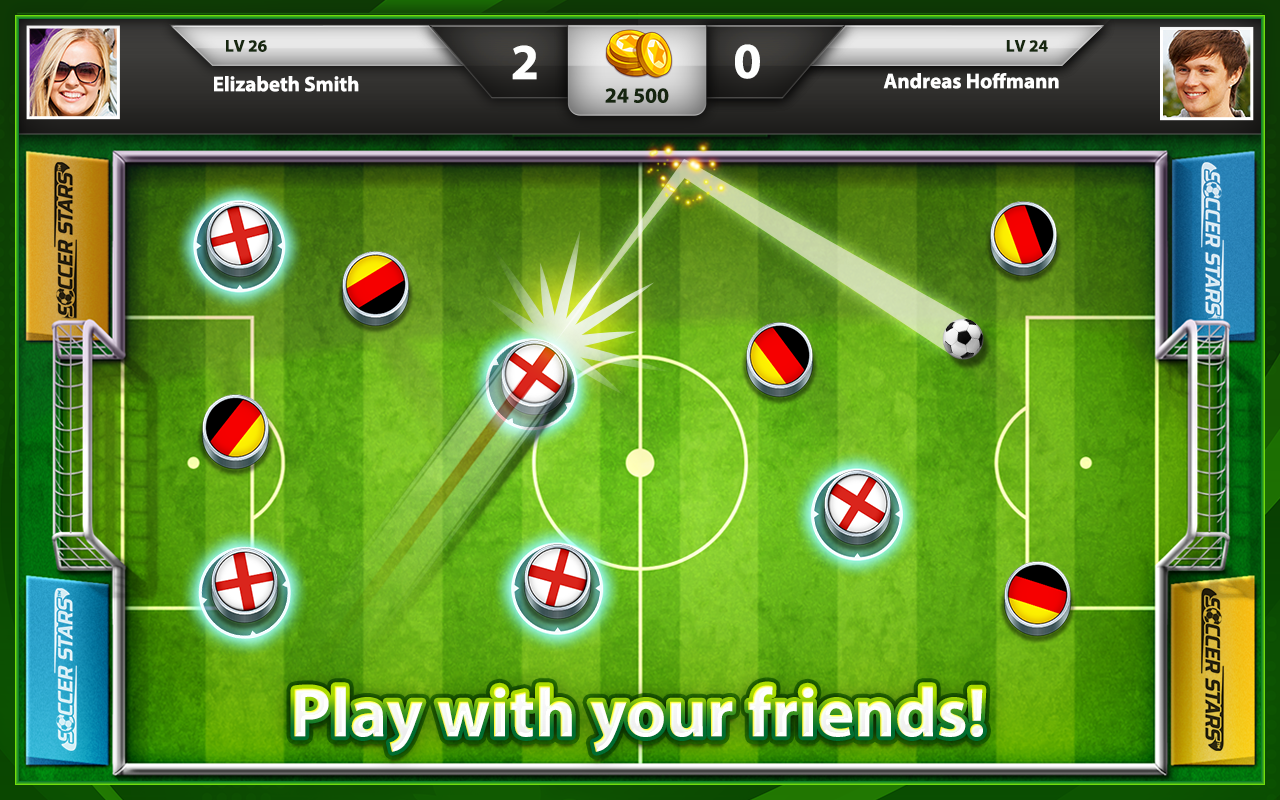 Miniclip made the most of the FIFA World Cup with the release of Soccer Stars. 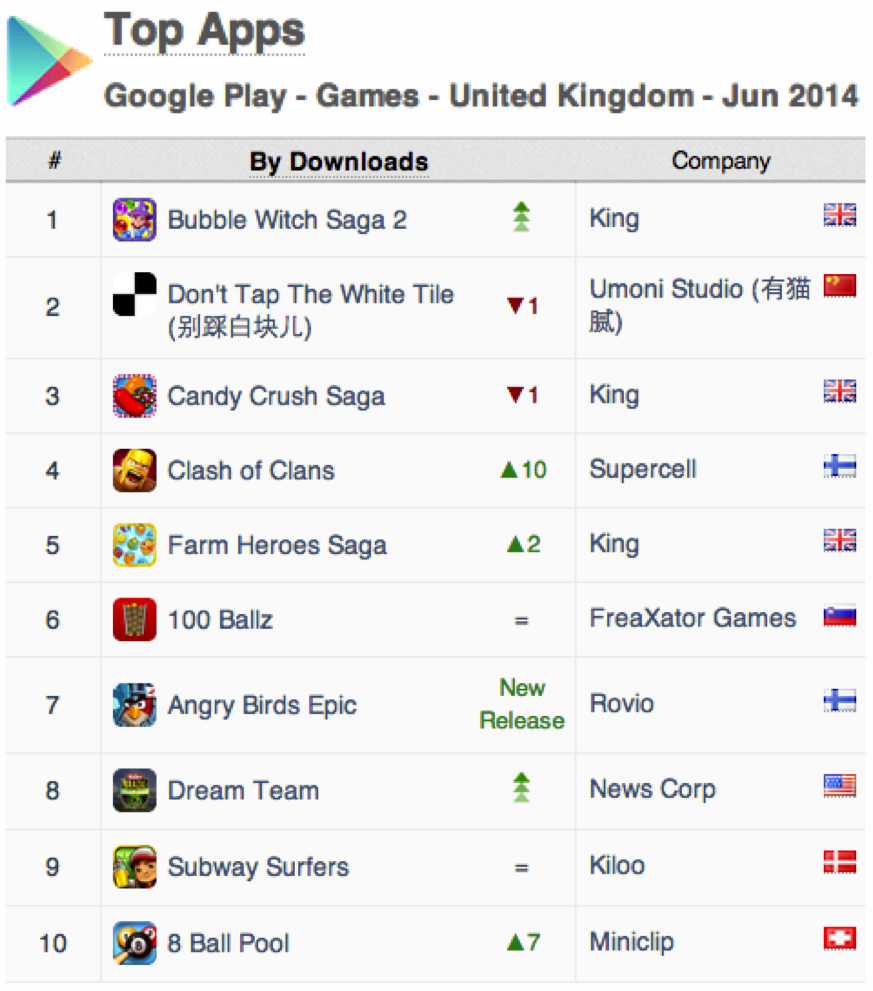 King released the latest installment in its Bubble Witch Saga puzzle franchise in early June, two years after the original was released. It made an immediate impact on the worldwide charts, but was particularly successful in London-headquartered King’s home market. The game finished the month at the top of the charts for monthly game downloads in the UK on Google Play, and in the top three on iOS. In doing so, it out-performed the original entry in the franchise. As it did in most countries, Bubble Witch Saga 2 received high ratings in the UK, reflecting its positive reception. 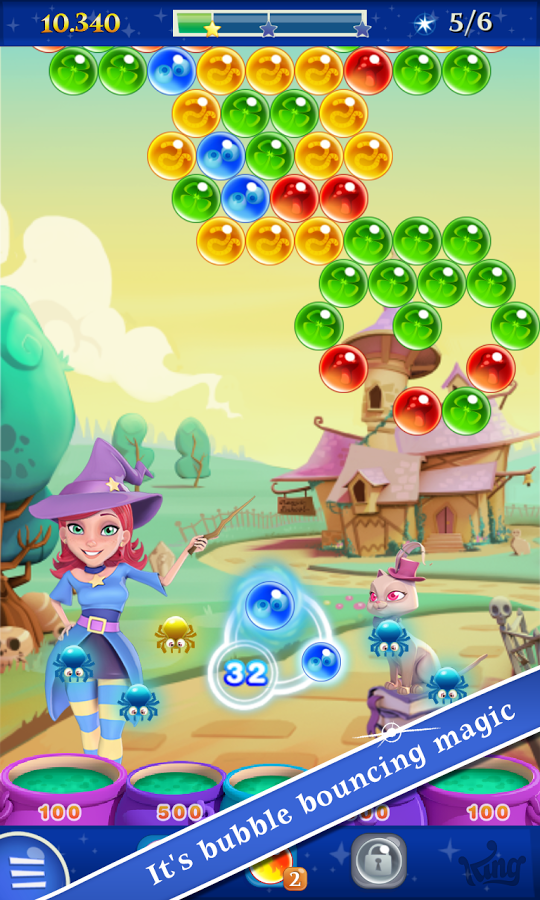 Bubble Witch Saga 2 rose to the top of the Google Play game download charts in June.

In general, King’s games performed strongly in the UK in June, particularly on Google Play where they occupied three of the top four positions by monthly games revenue. The expanding catalogue of high-performing games brings further positive news for King, after they recently announced record mobile quarterly revenue in Q1 2014 and a decreasing dependence on Candy Crush Saga for revenue.

Four newly released titles featured in the top iOS games by UK downloads in June, but only one had star power to help propel it into the limelight — Glu’s Kim Kardashian: Hollywood. With its high-profile celebrity backing, Kim Kardashian: Hollywood gained exposure in a huge array of media prior to release, including everything from The Mirror to The Independent in the UK. All the buzz helped it rise to the top download ranks in the UK, and placed it within the top charts for the month, despite only being released on June 24. However, it wasn’t just celebrity and marketing that kept Kim Kardashian: Hollywood in the top ranks. The game was also a hit with players, with an overwhelming majority of five-star ratings.

Family Guy The Quest for Stuff and its publisher TinyCo moved up the UK monthly game revenue ranks on both Google Play and the iOS App Store in June. The game, based on the animated TV series, features city-building gameplay reminiscent of fellow TV tie-in The Simpsons™: Tapped Out. The UK proved to be a key market for Family Guy The Quest for Stuff, finishing June as its top market on both iOS and Google Play. Throughout late May and June, a number of special events were conducted on the iOS version of the game, which coincided with peaks in the game’s daily grossing ranks.

Clash of Clans Climbs Even Higher