WhatsApp and Facebook - Our Future Social Lives on a Phone Screen

Yesterday’s acquisition of WhatsApp by Facebook has caused a whirlwind of activity in cyberspace, and rightly so. In its press release, Facebook declared the deal to be valued at $4 billion in cash and $12 billion in Facebook shares, plus an extra $3 billion in restricted stock units to vest over the next four years. As App Annie CEO Bertrand Schmitt discussed with Bloomberg, the question is: how will this change the industry?

While pundits go back and forth on the pros and cons, we wanted to present some of the data that led up to this event and congratulate the WhatsApp team. As a note, WhatsApp and App Annie shared an investor, Sequoia Capital.

It will come as no surprise that Facebook has been the clear leader in the social networking category for some time. Its dominance and stickiness has allowed it to grow to a massive size internationally.

As with any high-growth company, it must innovate on a regular basis. That innovation can come from within, or through acquisition. In the case of Facebook, acquisitions have been a key part of its strategy, as shown by the 45 acquisitions it has completed in the history of the company. WhatsApp is the latest in that string, and very likely one of their most strategic to date. While Facebook is certainly a part of the social networking space, including its Instagram and Facebook Messenger apps, it gains a significant presence in new markets with an active user base. 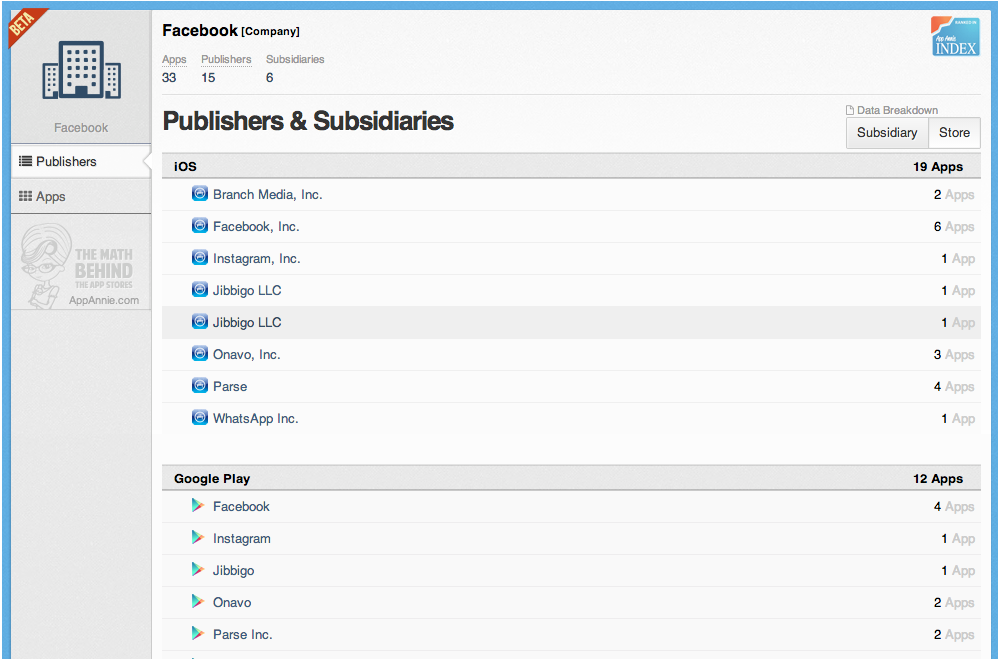 Now to the second part of this power couple. WhatsApp was formed five years ago and has seen continuous growth, reaching a reported 450 million users, of whom 70% are active on a given day. That’s a massive number, and shows not only the importance of social messaging apps, but equally their move into a top-tier mobile app. 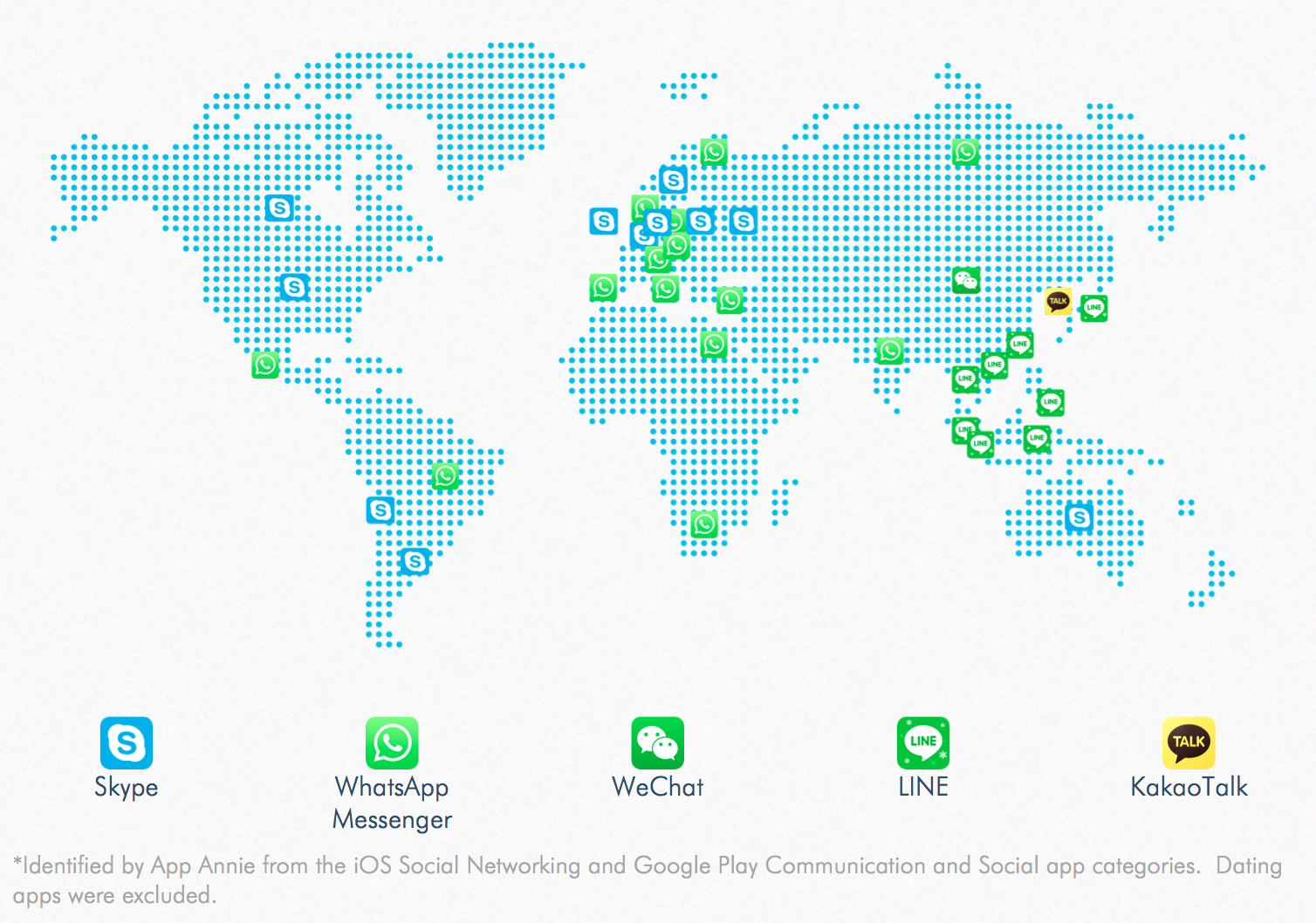 WhatsApp Messenger has a strong presence in many countries in Europe, the Middle East, South Africa, South America and India.

While the above graphic gives a representation of where WhatsApp is used, it doesn’t show its relative strength in these countries. WhatsApp has historically had significant presence in Western countries, especially in Europe, but a good portion of the recent growth is coming from emerging countries such as Brazil, India and Mexico. 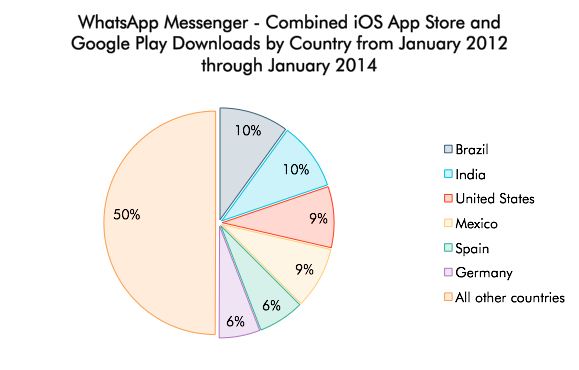 Already successful in Western markets, WhatsApp Messenger has had increasing success in emerging markets such as Brazil, India, and Mexico since 2012.

This growth is further amplified by a recent dramatic uptick in WhatsApp users. In the last four months of 2013 alone it added 100 million active users to its service. In order to best show this hockey stick growth, we’ve used App Annie Intelligence to create an indexed chart showing growth over the last two years. 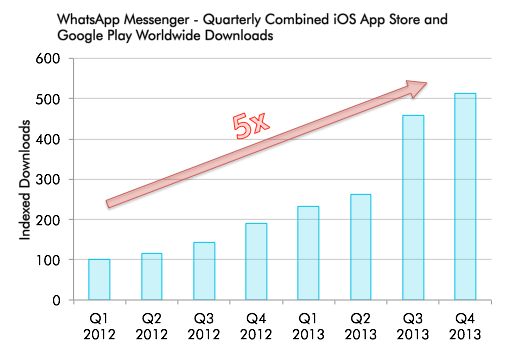 WhatsApp Messenger was already showing strong quarterly growth before downloads skyrocketed in the second half of 2013. 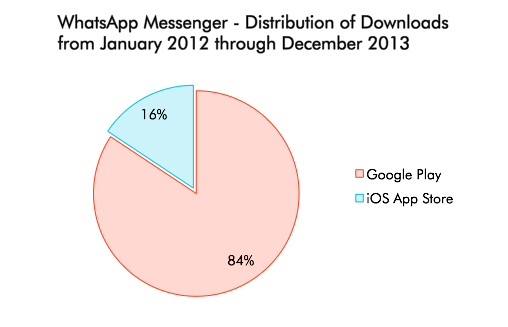 What’s It All Mean?

The acquisition has already paid dividends for WhatsApp, with its United States iPhone App Store ranking rising in the hours soon after the announcement was made: 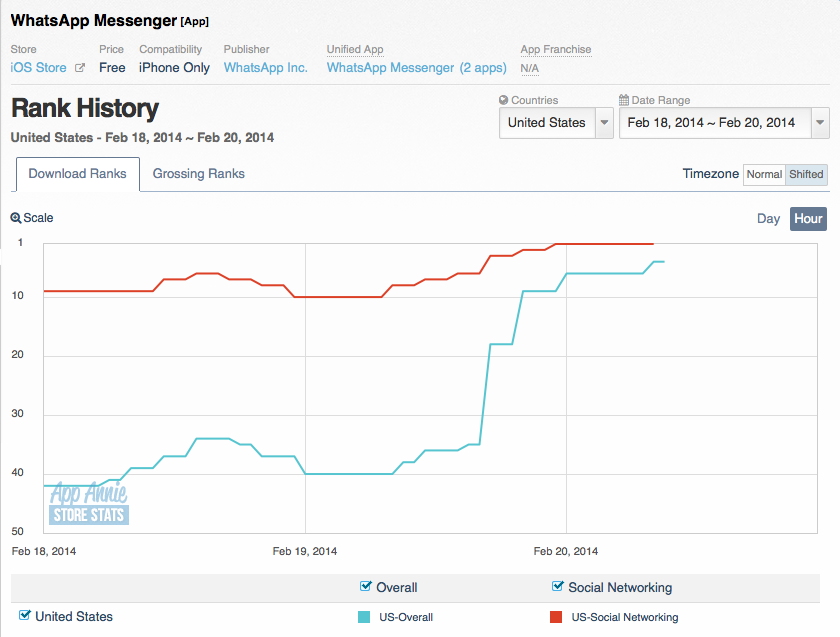 The day following the acquisition announcement, WhatsApp Messenger’s rank also began to climb in the iOS App Store in markets such as China, Japan and South Korea.

Setting the Stage for a Global Offensive

Throughout 2013, WhatsApp Messenger made gains in the monthly download ranks, reaching #2 on Google Play and #8 in December 2013 on the iOS App Store for apps outside of games. This also propelled it to become the most downloaded messaging app worldwide in 2013. 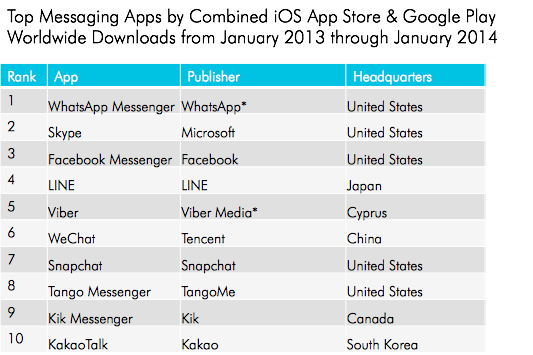 * Source: App Annie Intelligence
* WhatsApp and Viber Media were both acquired in February 2014. They are displayed as independent publishers here, as rankings for this table were determined from downloads accrued prior to the acquisitions.

We observed WhatsApp’s global rise throughout 2013 (read more in last month’s App Annie Index 2013 Retrospective report), where its messaging app climbed into the Top 10 non-game app charts by downloads and revenue on iOS App Store and Google Play. It has performed exceedingly well in Europe and parts of Asia, positioned as the top grossing messaging app in the United Kingdom, Germany, and even Russia.

We’re very excited by all this news as it confirms a trend we seen for some time, namely that in addition to gaming, the social messaging platform space is the hottest space when it comes to mobile. To perform your own research on the space, we encourage you to open an App Annie Store Stats account for free today.