The Worldwide App Annie Index for Apps highlights the hottest mobile app properties outside of games for both the iOS App Store and Google Play. To find out about current trends in other markets and app categories, please check out our Japan Index for Apps, the Index for Maps & Navigation, the Russia Index for Apps and the July 2014 Worldwide Index for Games. 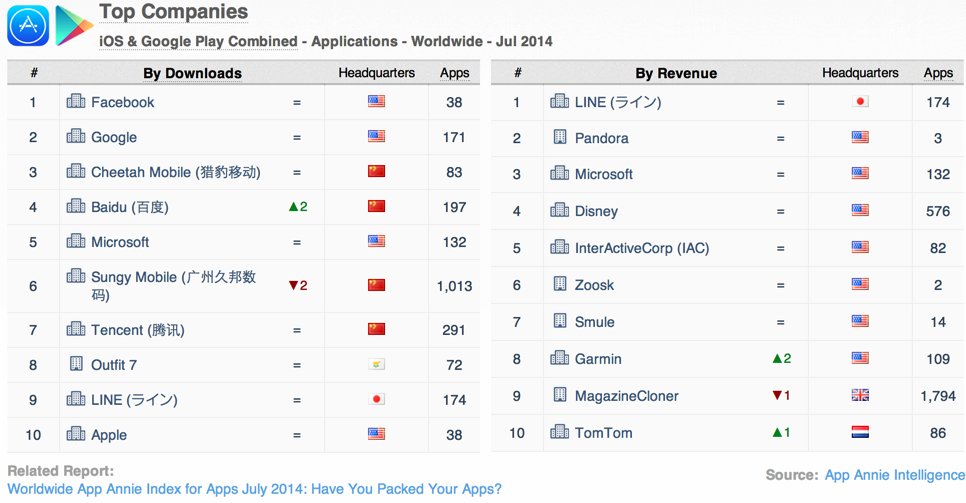 For the complete list of July’s top apps and publishers around the world, click the chart above.

Garmin Grabs a Spot in the Top Charts

As reported in our June 2014 Index for Apps, Navigation apps were already steering toward the top. In July, Garmin continued its upward move and cracked the iOS top 10 apps outside of games by revenue. Garmin’s top-grossing iOS app in July was NAVIGON Europe, which provides a seamless mobile navigation system spanning over 40 countries in Europe. Garmin dropped NAVIGON Europe’s price from $99.99 to $64.99 in a limited time promotion, which coincided with increased app downloads, especially in Germany. 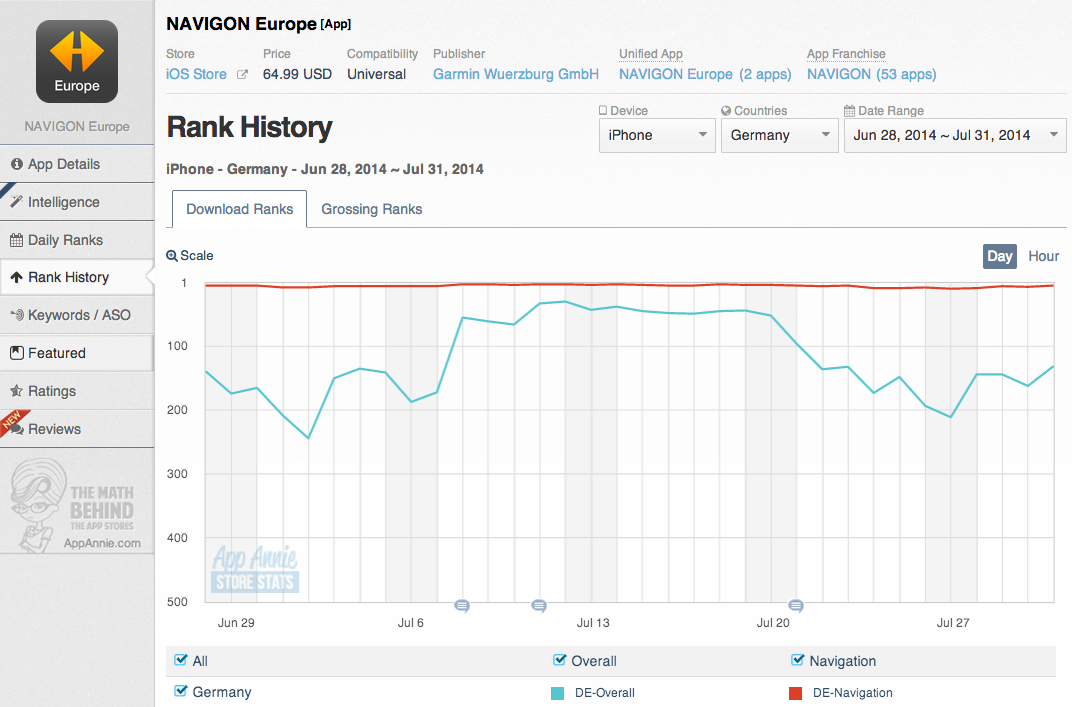 NAVIGON Europe saw a big increase in paid downloads around the same time Garmin ran a 35% promotional discount on the app.

NAVIGON select Telekom Edition also saw significant revenue growth in Germany in July, as Garmin offered a stripped-down version of its popular iOS app NAVIGON Europe for all Telekom Deutschland customers. The app experienced a big spike in revenue around the time a new update released featuring live fuel prices in Germany as part of a premium package users could purchase.

"Summer is a busy travel time with many drivers hitting the road, so we always run special price promotions for our premium navigation apps. This year's campaign was especially successful and the increase in sales shows that our customers value premium navigation. The advanced features of our apps help drivers save time and money and make it easier for them to get around." --Joem Watzke, VP of Worldwide Mobile Business at Navigon 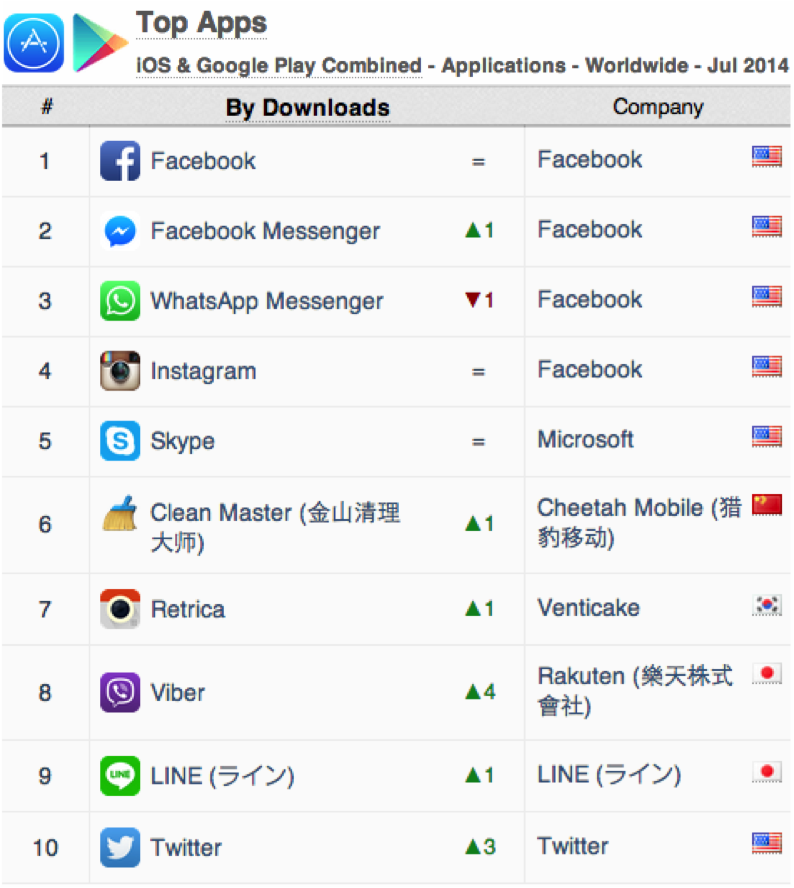 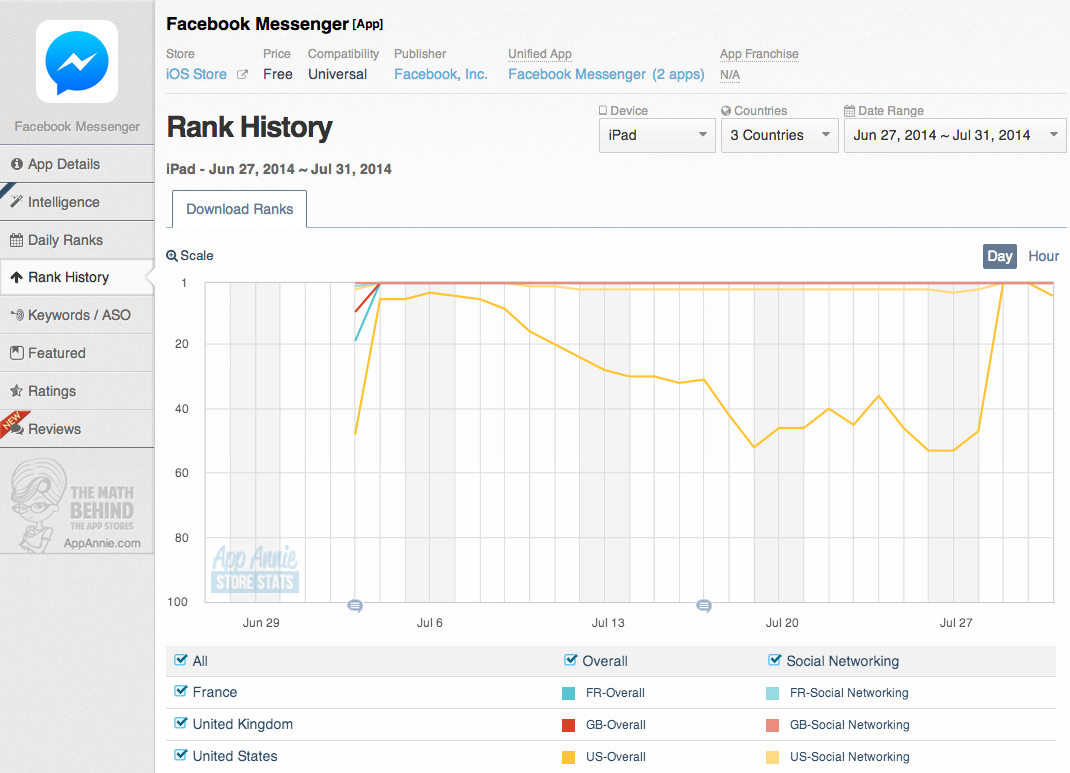 Viber cracked the top 10 for combined worldwide downloads thanks to significant growth in India, where the messaging app entered the top 5 overall app ranks by downloads in late July. Viber’s rise occured around the same time a promotional campaign spanning television and digital platforms launched. The app’s established local team and heavy marketing spend has helped it compete in a crowded space filled with global heavyweights such as WhatsApp Messenger, WeChat and LINE, as well as domestic player Hike. 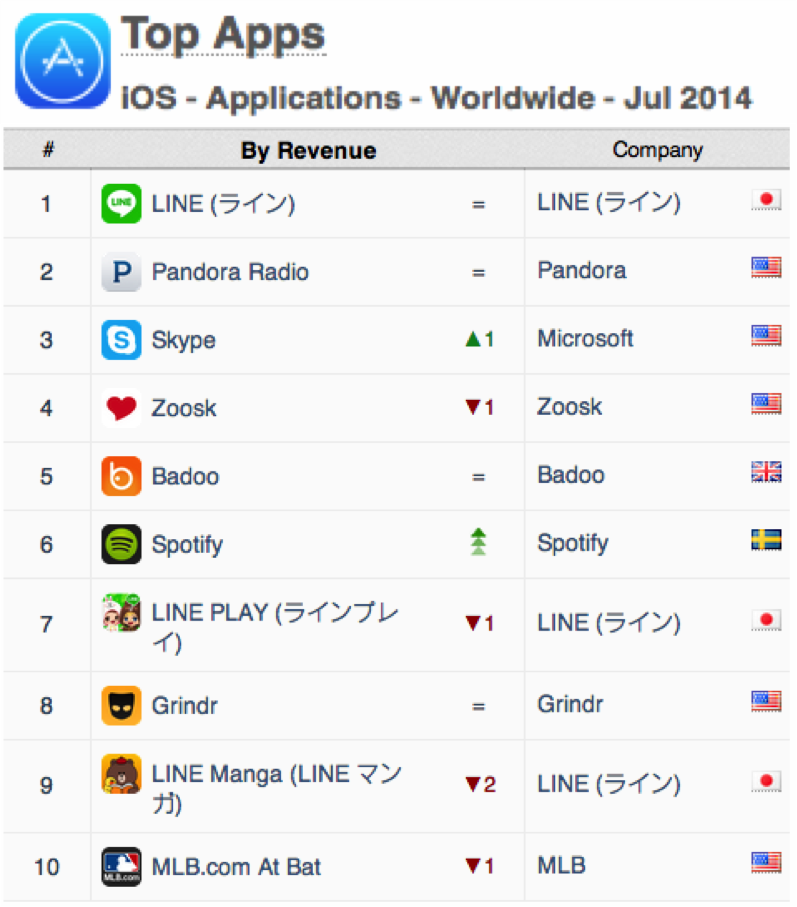 Spotify made major moves in July’s iOS revenue charts -- the music streaming service with over 40 million active users updated its mobile app to include in-app purchases at the end of June. Spotify’s decision had a direct impact on the global grossing charts, where it joined Pandora as the second music streaming app in the iOS top 10 by revenue. 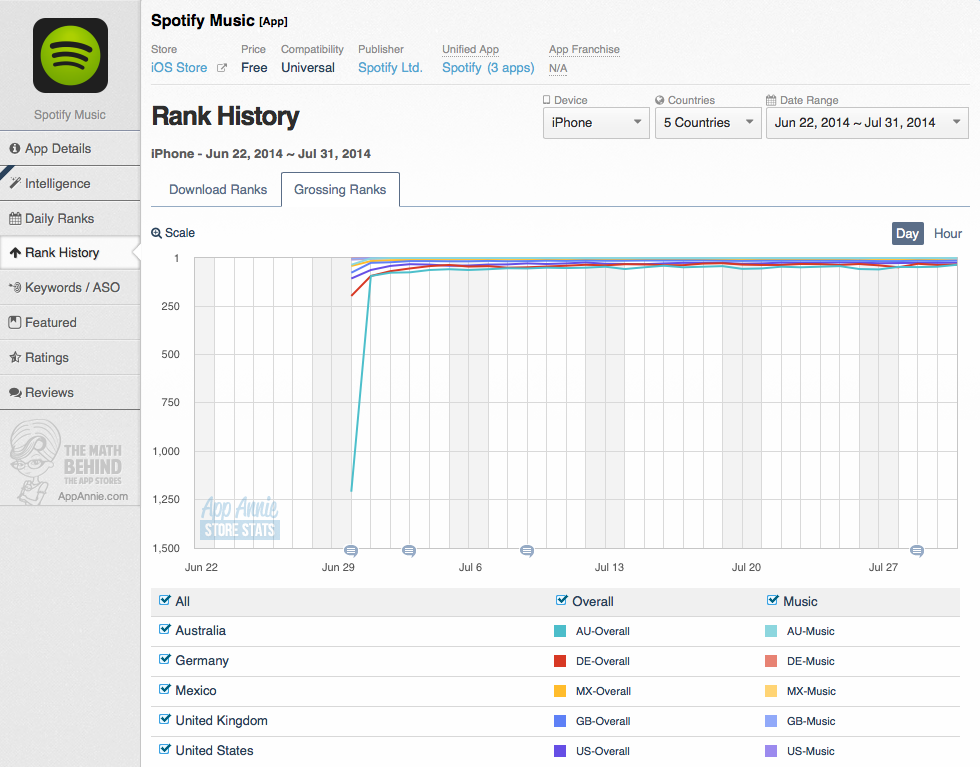 Spotify has yet to integrate in-app purchases on its Google Play app, which was only released in late May 2014. It’ll be interesting to see if Spotify can close the gap on Pandora, which reigns supreme as the top grossing music streaming app worldwide. The music streaming space is getting increasingly crowded from competitive subscription services such as Amazon Music, recent Apple acquisition Beats Music, as well as other music apps like iHeartRadio and Rdio.

As noted in App Annie June 2014 China Apps Index, Chinese users have a big appetite for streaming mobile video. This trend continued in July, as Tencent’s QQVideo made significant moves in the iOS download chart. Two new updates to the app coincided with bumps in download rankings, but the bigger news was Tencent signing a contract that guaranteed exclusive distribution rights to season 3 of hit TV singing competition “The Voice of China”. Accordingly, QQVideo jumped up the download ranks on July 19, the same day that “The Voice of China” premiered. Internet distribution of TV content in China is key as content produced by provincial TV stations is only accessible from other provinces via cable subscriptions or internet. Online distribution of popular TV content is popular among Chinese students studying abroad, who rely on internet streaming to stay up-to-date on their favorite shows.

On Google Play, K2G’s German dating app LOVOO entered the worldwide grossing charts. While Zoosk, Badoo and Grindr achieved high placements in Apple’s grossing charts, LOVOO was the sole dating app to feature in Google Play’s top grossing apps. Updated in late June, the new version allows users to register and log in with a Google account. LOVOO was featured in the “Looking for Love” category on Google Play in July, and saw increased revenue driven by Germany and the United Kingdom.

For those of you who also are looking for an update on top apps in gaming, please check out our July 2014 Index for Games. To keep up-to-date with all the changes at the top of the app and publisher charts, check out the complete set of App Annie Index tables.