Each month, the App Annie Index highlights the top-performing games and apps for the iOS App Store and Google Play. Our analysis covers trends among the leading apps across countries and categories, and is the industry standard for professionals looking to compare leading apps and publishers. To find out about current trends in other markets and app categories, please check out the App Annie October 2014 Games Index, our report with Kantar Retail highlighting the top retailers in France and our special coverage of China’s 11/11 m-commerce event.

For the complete list of October’s top apps and publishers around the world, click the chart above. 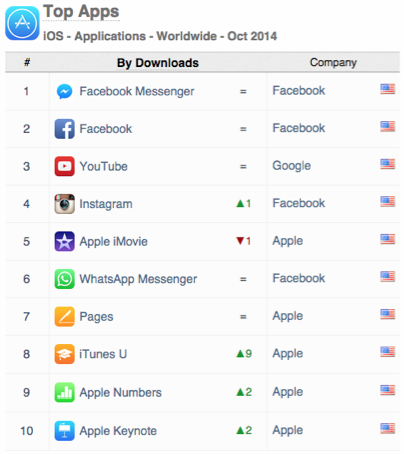 As seen in the September 2014 Index for Apps, downloads for apps published by Apple increased following the record-setting launch of its new iPhone, with iMovie and Pages breaking into the worldwide top 10 iOS download charts. In October, Apple continued its fastest-ever iPhone rollout, bringing the smartphone to 36 additional countries and territories.

On October 17, the new iPhone arrived in China, the world’s largest smartphone market. This was also the first time that the new iPhone was available on all three of China’s wireless carriers at launch. Significant download growth in China following the launch helped three other apps classified as “Apps Made by Apple”: iTunes U, Numbers and Keynote. These apps join the worldwide top 10 iOS download rankings in October.

Following the launch of new iPhones in China, iTunes U climbed download ranks.

With demand for the new iPhones continuing to outstrip supply, along with the recent launch of the new iPads and upcoming holiday season, we expect to see Apple’s apps maintain a healthy level of downloads worldwide.

Optimization Apps Get a Boost

Smartphone optimization apps from Chinese publishers Baidu and Cheetah Mobile experienced robust download growth on Google Play in October. These apps provide a variety of features that monitor, clean and protect smartphones to help them run fast and efficiently. Baidu’s DU Speed Booster made the biggest gains and entered Google Play’s top 10 app rankings by worldwide downloads. Its growth was led by Indonesia, which we highlighted in our Q3 2014 Market Index as one of Google Play’s key emerging markets.

Another Baidu app, DU Battery Saver, recently announced that it surpassed 100 million downloads, as well as a partnership with the World Wide Fund for Nature (WWF) to support global conservation. Its growth, along with DU Speed Booster’s, helped Baidu move up one spot on Google Play’s worldwide publisher download rankings in October. 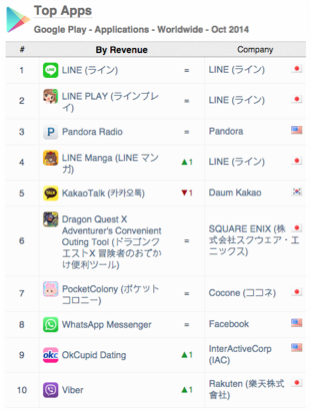 Dating apps from publisher InterActiveCorp (IAC) had a strong October on both the iOS and Google Play revenue charts. Its OKCupid Dating app experienced steady month-over-month revenue growth on Google Play, cracking the top 10 in September  and then rising another spot in October. Meanwhile, on the iOS App Store, IAC launched an iPad-optimized version of its Match.com app on October 16. Soon after its release, the app was featured in the “Best New Apps” section on the iOS App Store homepage. 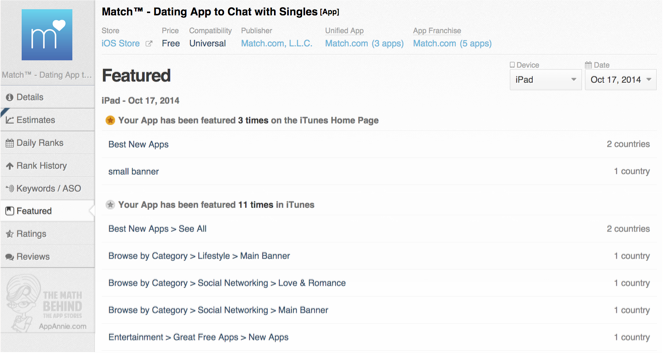 Match.com’s new iPad-optimized app was featured prominently on the iTunes Home Page soon after its release.

IAC does not show any signs of slowing down. In October, it partnered with Steve Harvey to launch Delightful.com and its Tinder app is preparing to start monetizing with the launch of a premium subscription named Tinder Plus. This addition will give Tinder users highly requested features including the ability to undo left swipes and discover people in cities away from their current location. Furthermore, the whole dating app category should see increased activity during the upcoming holiday season, which is traditionally its busiest time of the year.

For those of you who are interested in finding out more about top apps in other categories, please check out the October 2014 Worldwide Index for Games. To keep up-to-date with all the changes at the top of the app and publisher charts, check out the complete set of App Annie Index tables.