Each month, the App Annie Index highlights the top-performing games and apps for the iOS App Store and Google Play. Our analysis covers trends among the leading apps across countries and categories, and is the industry standard for professionals looking to compare leading apps and publishers. To find out about current trends in other markets and app categories, please check out the App Annie Q3 2014 Market Index, September 2014 Games Index and Spotlight on Connected Devices. 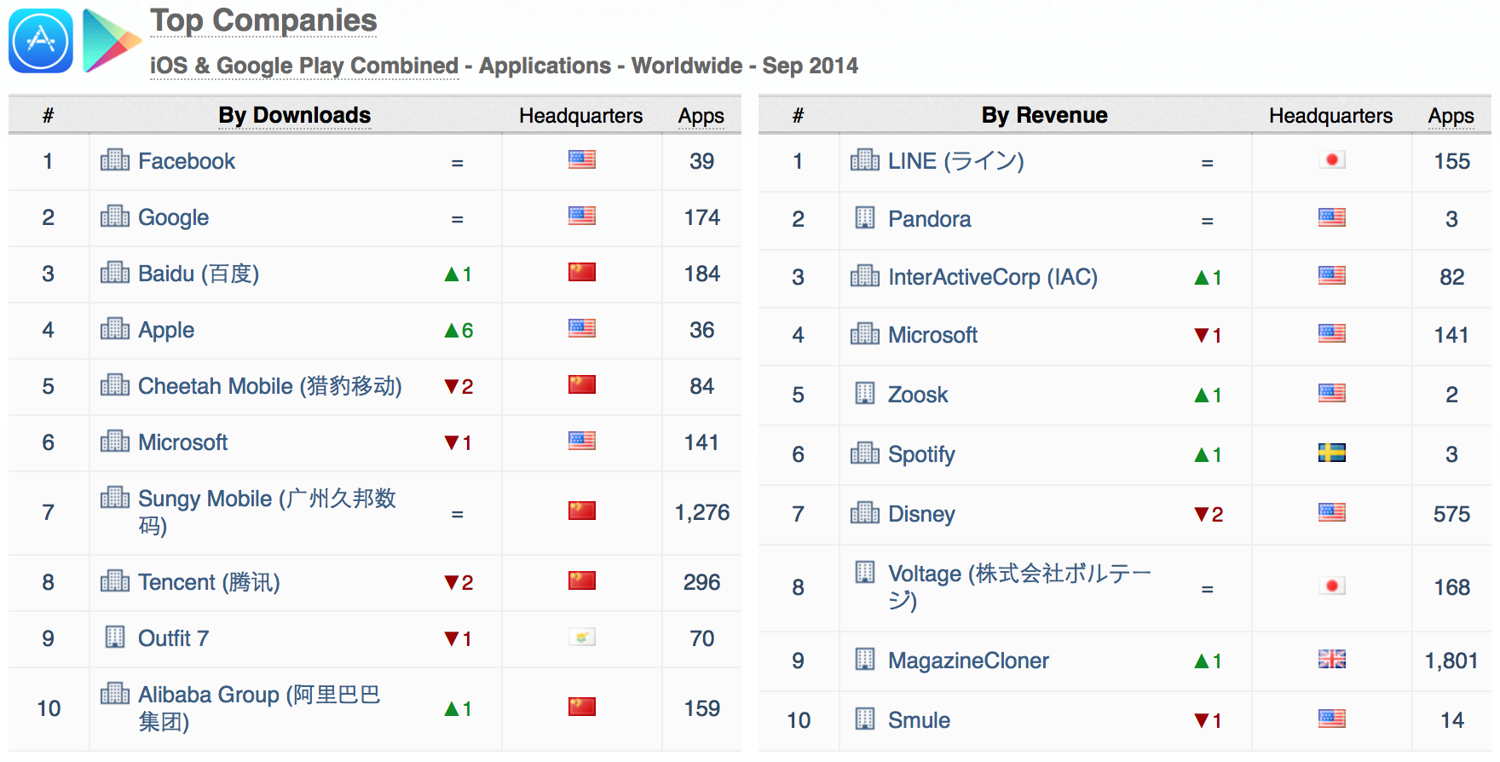 For the complete list of September’s top apps and publishers around the world, click the chart above.

Apple’s Apps Break into the Top 10 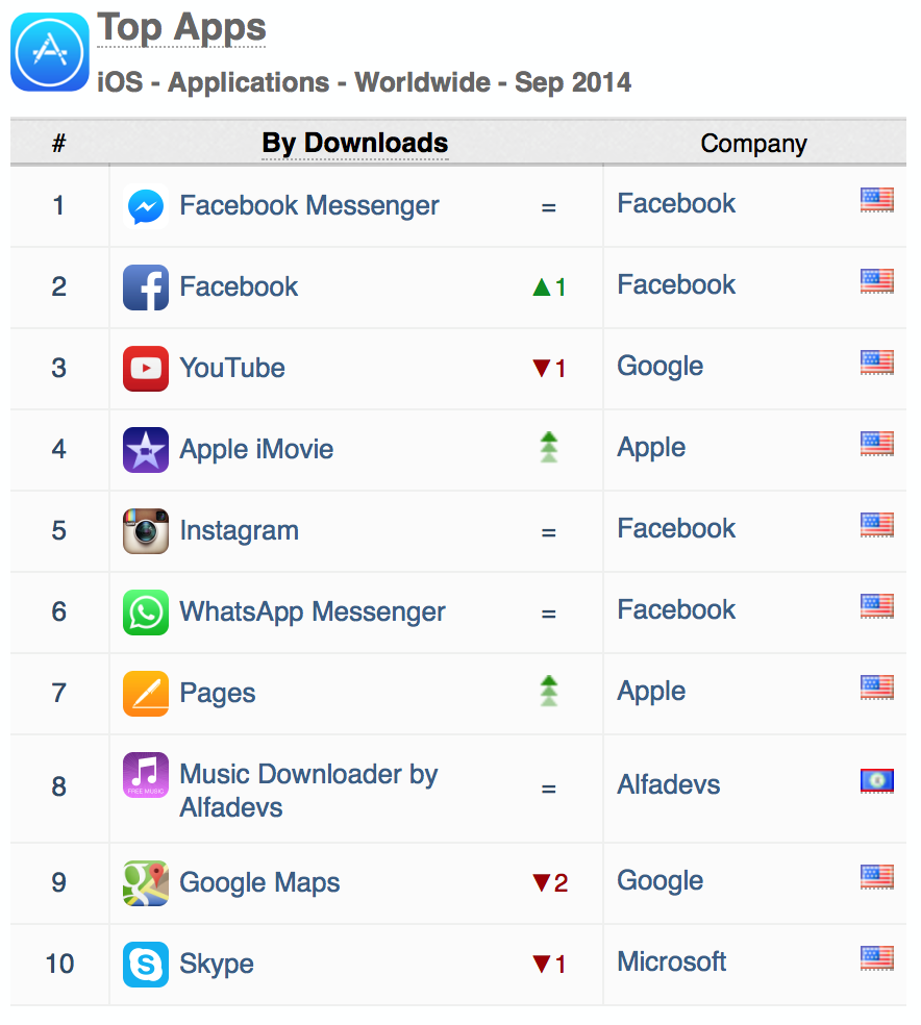 Apple’s new iPhone models set a first weekend record of over 10 million new devices sold just three days after their launch on September 19, and had a visible impact on September’s app rankings. Apple’s free offer for the iLife and iWork app suites was extended to these new devices. While all iLife and iWork apps saw an increase in downloads, iMovie and Pages broke into the worldwide Top 10 iOS download charts. Most downloads were generated from the United States and Japan, which were two of the countries where the new iPhones launched first. 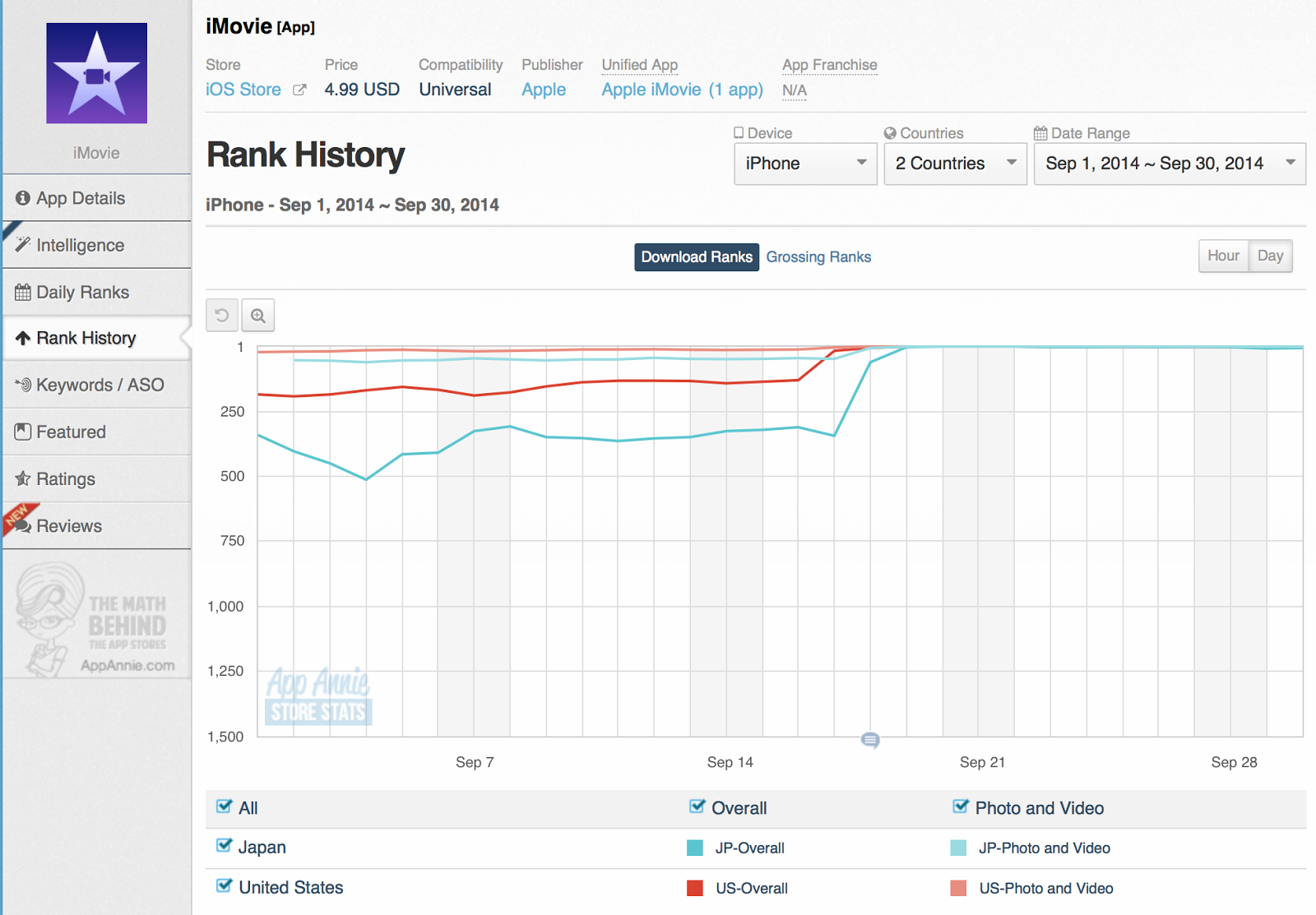 Shortly after the initial launch of the new iPhones, iMovie’s rankings jumped to the top in Japan and the US.

Other Apple apps, such as Numbers and Keynote, also experienced high demand and helped bump up Apple’s worldwide overall company rank by downloads for iOS. After receiving regulatory approval from the Chinese government, Apple announced the availability of the new iPhone 6 devices in China. While the iLife and iWork apps already generate a large percentage of downloads from China, it will be interesting to follow their impact on the charts after the devices officially release.

Adobe Gets Creative With Productivity Apps 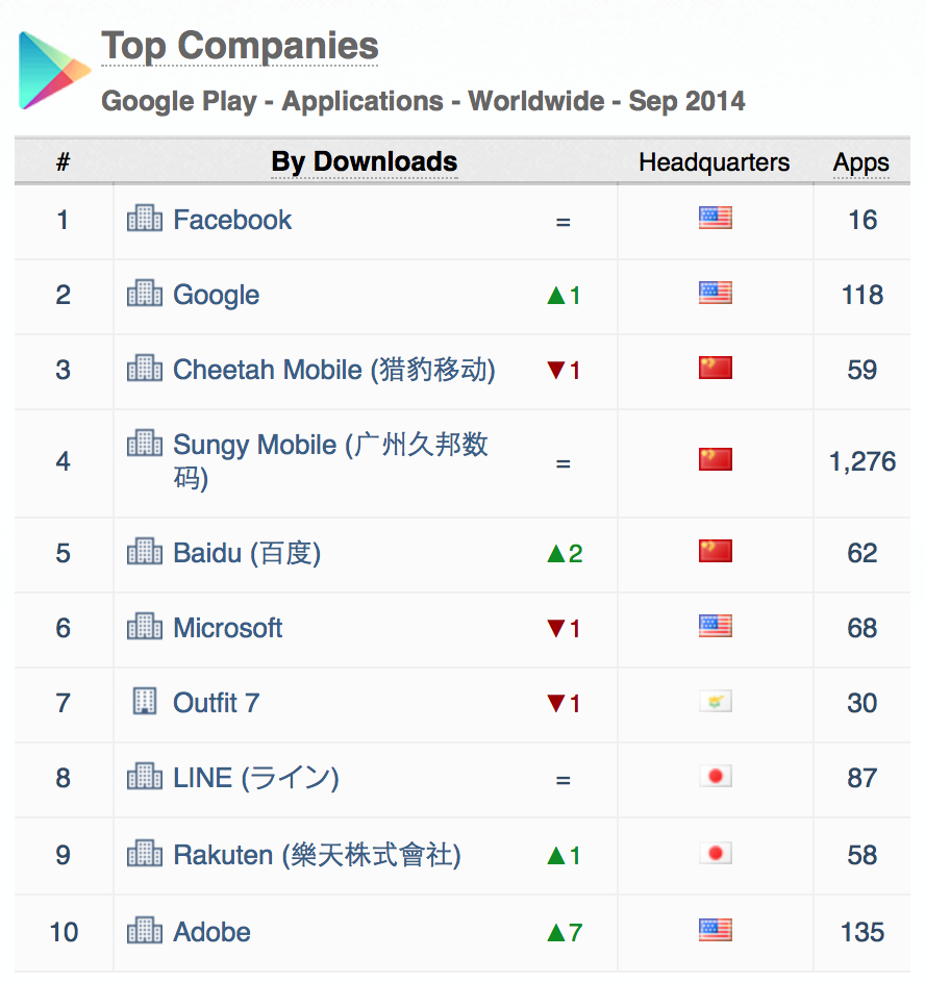 The performance of Apple’s iWork suite is part of a larger trend -- 2014 has been a pivotal year for Productivity apps on mobile devices. March saw the successful release of Microsoft’s Office for iPad suite, and Google made a play for the Productivity space in April, releasing standalone apps for Docs, Sheets and Slides. These apps all focused on providing a seamless experience between mobile and desktop.

In September, Adobe flew up the company charts after its acquisition of Aviary, which publishes a number of photo-editing apps. Of greater significance, Aviary also develops SDKs for creative app development. Adobe later released the public beta of its first SDK for iOS, giving third-party developers access to its APIs to extend mobile productivity and workflow options, with an Android version in the pipeline. Mobile productivity has clearly become a key focus of Adobe’s strategy, illustrated by its launch of an extensive array of new apps designed to smooth the transition between mobile and desktop environments. 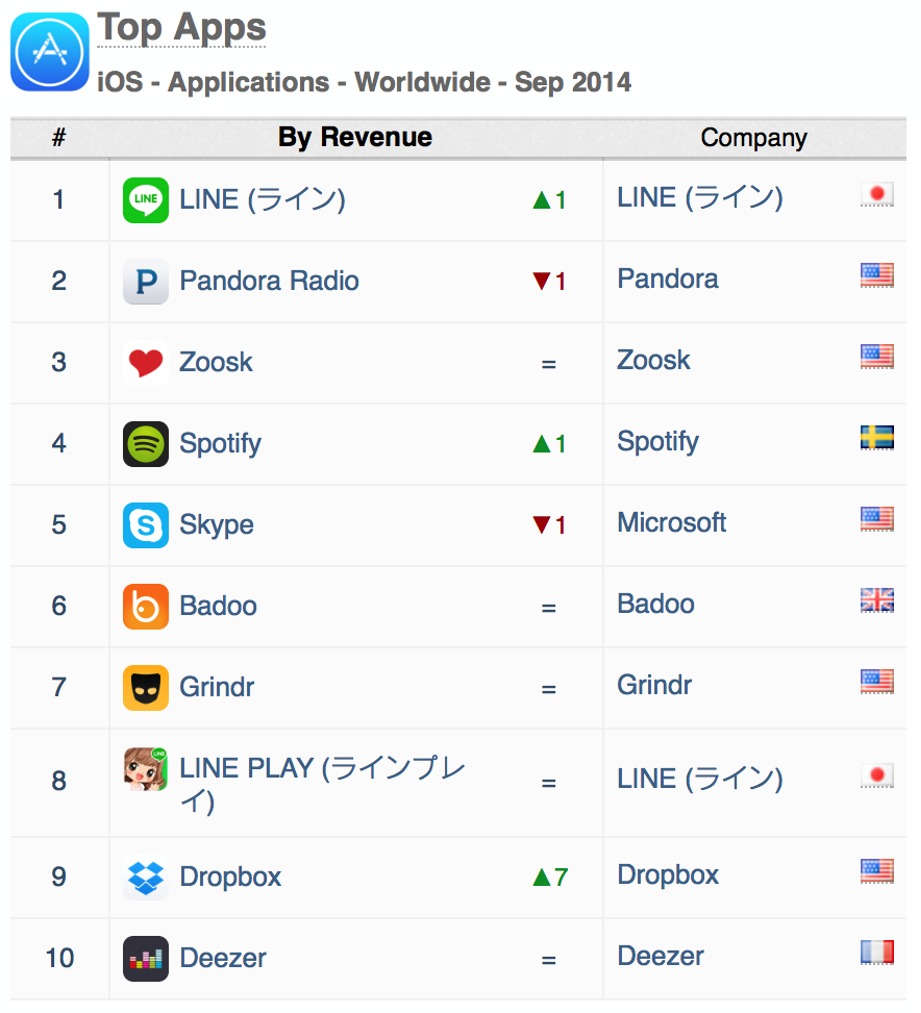 The rise of Productivity apps extended beyond file creation, as evidenced by the September success of Dropbox. The file-sharing app broke into the top 10 worldwide iOS revenue rankings, normally dominated by a party of messaging, music and dating. Over the course of September, Dropbox rolled out a slew of updates adjusting its productivity app for iOS 8. In addition to enhanced folder management options, Dropbox leverages the widget function introduced in iOS 8. A Dropbox section can now be included within Apple’s Notification Center, offering a quick update on recent changes to files. 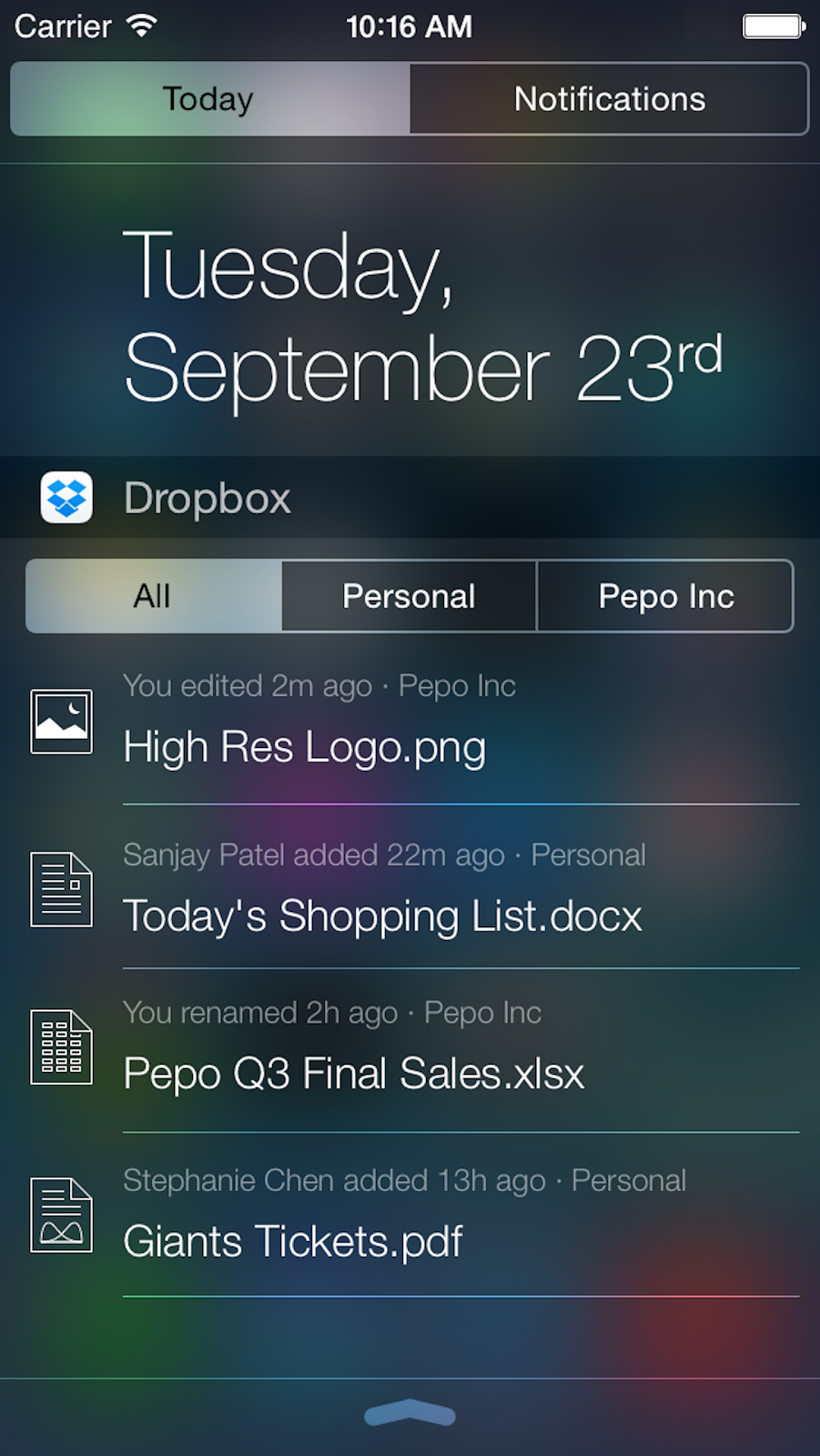 Dropbox’s increased grossing rank was driven by the United States, the United Kingdom and Japan -- countries that were all included in the initial launch wave of the new iPhones. Having a subscription model of either $25.99 for three months or $99.99 annually, the updates catered to iOS 8 paid off. Dropbox showcases how taking advantage of new operating system features can increase profitability through enhancing the user experience.

Google Play Users Get the Message 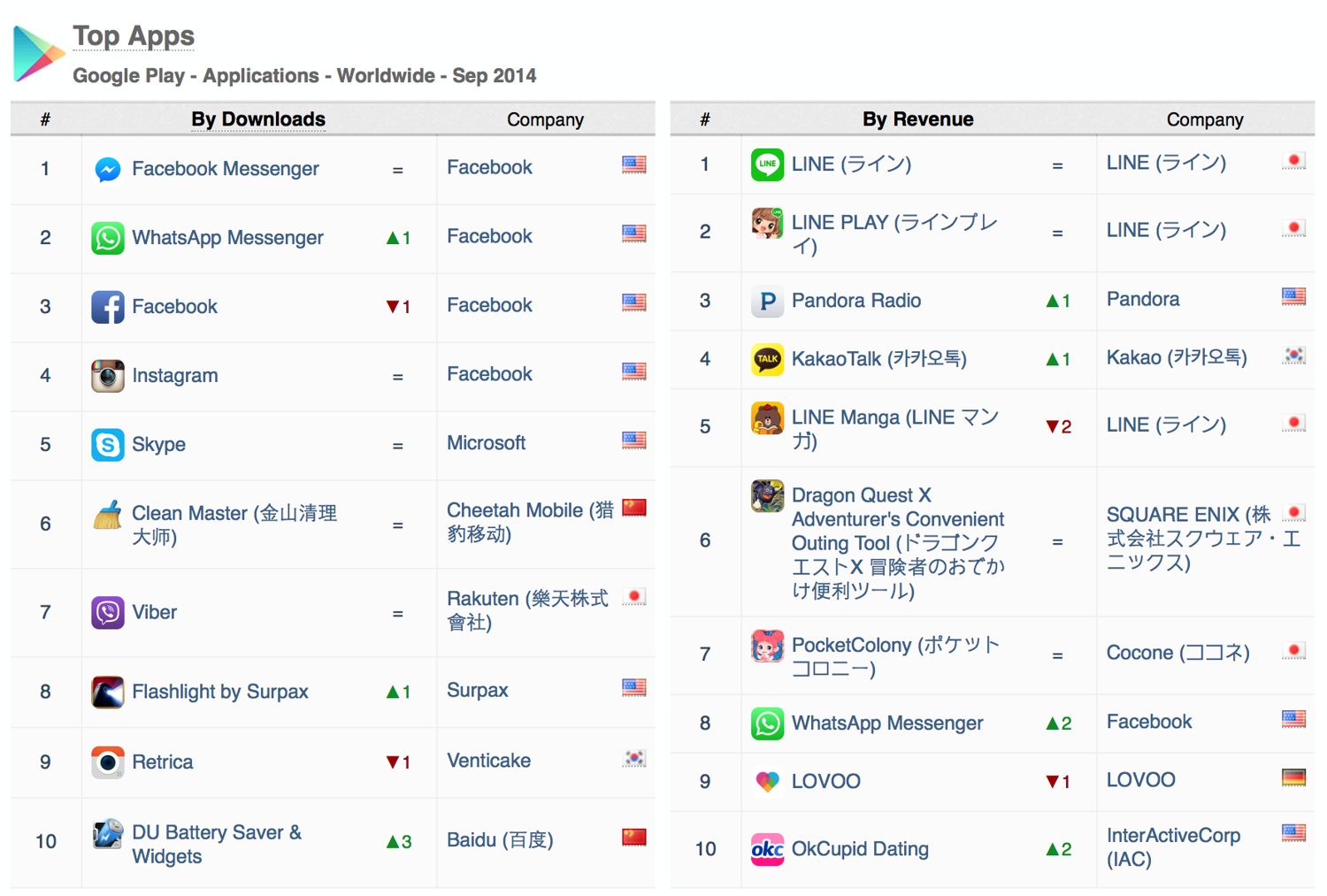 One of the main trends of Q3 2014 was the impressive gain in downloads for messaging apps on both major app stores. The September charts on Google Play certainly support that trend, led by gains for WhatsApp Messenger. In September, the messaging app offered an extended update to both the iOS and Android versions to introduce image and photo captioning. In the Google Play charts, this update coincided with an increase in rankings by both downloads and revenue. Most downloads were generated from emerging markets India, Brazil and Mexico.

For those of you who are interested in finding out more about top apps in other categories, please check out the September 2014 Worldwide Index for Games. To keep up-to-date with all the changes at the top of the app and publisher charts, check out the complete set of App Annie Index tables.