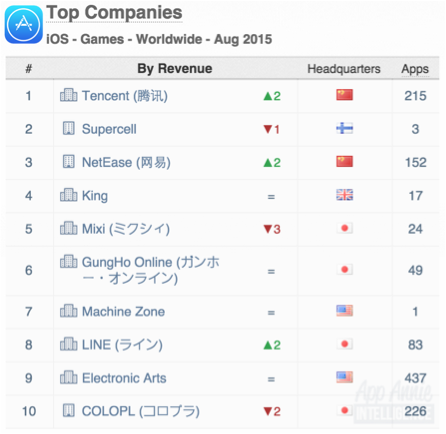 Tencent achieved a huge a milestone in August 2015. For the first time since we released the App Annie Index, the company has taken the top spot on the worldwide iOS charts for revenue. To put this in perspective, Tencent, with the help of its vast library of games, is only the second company to do this in the last 19 months.

Over the past year, we have repeatedly written about Tencent’s successes in mobile gaming. For example, in our August 2014 Index, we discussed the company’s partnerships which brought hit titles Candy Crush Saga and Everybody’s Marble to China. In addition, we have noted Tencent’s continued effectiveness at leveraging its WeChat and QQ platforms to drive awareness, engagement and monetization of its games; as well as expanding into new gameplay formats like 3D mobile shooters. 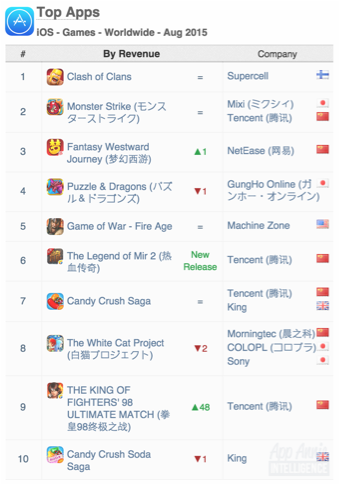 However, it was two new games, The Legend of Mir 2 and THE KING OF FIGHTERS’ 98 ULTIMATE MATCH, that pushed Tencent to the top of the worldwide iOS revenue charts. Both of these games leverage well-established IP, with the former based on a hugely popular MMORPG from the early 2000s and the latter based on a late 1990s title that was a hit both in arcades and on consoles.

The Legend of Mir 2 was released in the beginning of August and spent the entire month among the top 3 grossing iOS games in China. Meanwhile, THE KING OF FIGHTERS’ 98 ULTIMATE MATCH was released in mid-July, but made huge strides up China’s iOS revenue rankings coinciding with a late-July price change from $0.99 to free. 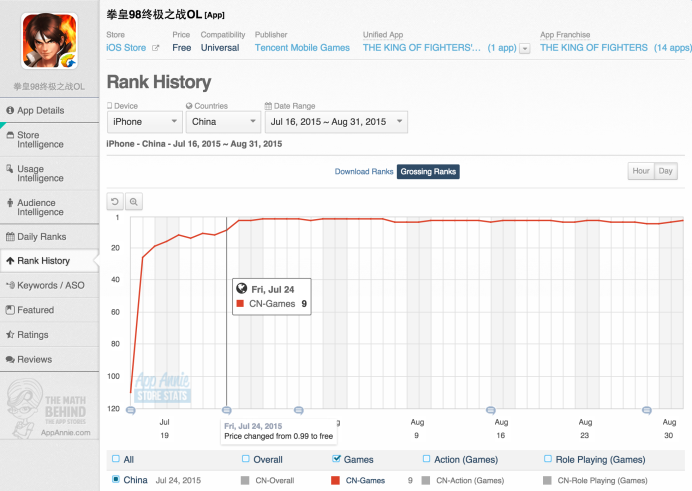 Following a price change in late-July from $0.99 to free, THE KING OF FIGHTERS' 98 ULTIMATE MATCH cracked the Top 5 for iOS revenue in China and stayed there for all of August

Currently, both The Legend of Mir 2 and THE KING OF FIGHTERS’ 98 ULTIMATE MATCH are only available in China. This further demonstrates the growing importance of this market and the impact it has on the worldwide rankings.

Angry Birds 2 Shoots to the Top 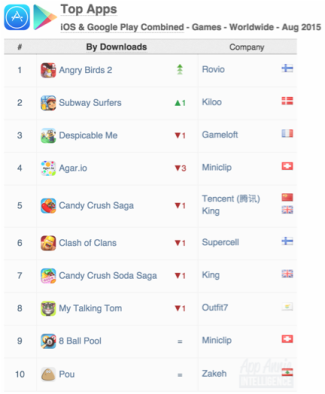 In December 2009, Rovio established itself on the mobile gaming scene when it released Angry Birds. The title went on to become a global phenomenon spawning a huge game franchise (which includes two Top 10 games by All-Time Worldwide iOS Downloads), a wide array of licensed products and even a star-studded movie slated for a May 2016 release.

Angry Birds 2, the original title’s first official sequel, launched on July 30. In its first full month, the game flew up to the top spot on August’s worldwide download charts for the iOS App Store & Google Play combined. Like its predecessor, Angry Birds 2 has seen global success. It generated 30 million downloads in its first two weeks and to date has achieved the #1 Daily Rank for iPhone games in over 140 countries. Also, for the month of August, Angry Birds 2 was ranked #6 in the United States for iPhone usage penetration. 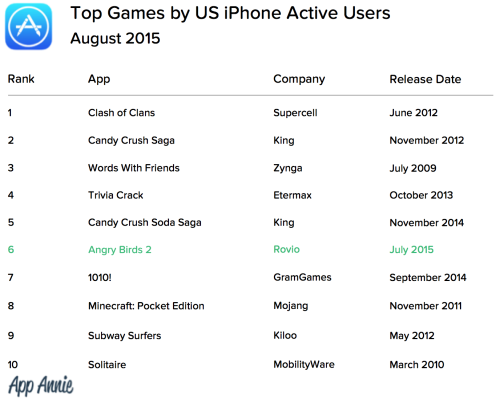 In its first full month, Angry Birds 2 ranked among the Top 10 games for iPhone active users in the United States.

Angry Birds 2 retains many of the core elements, like slingshot gameplay and familiar characters, that made the original popular. It also brings a variety of new features including a new bird named Silver, multi-stage levels, new spells and the Arena where players can challenge each other in daily tournaments.

In addition, unlike the first Angry Birds, which monetized via paid downloads, the sequel employs a freemium model. Players download the game for free and then can use gems to spend on lives and virtual goods. Gems are earned by playing the game, watching videos or making in-app purchases.

Happy Wheels Rolls onto the Charts 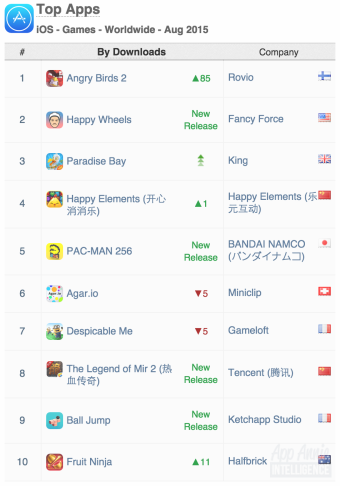 August also saw a newcomer make a huge splash in the mobile gaming space. Fancy Force launched Happy Wheels, its first mobile game, on the iOS App Store on August 19 and achieved immediate success. The game, which was first released for web browsers in 2010, is a physics-based side-scroller where players complete levels by guiding a businessman on a personal transporter past dangerous obstacles to reach the finish line. Failing to avoid the hazards leads to gory outcomes like losing limbs and splattering blood.

Within a week of its launch, Happy Wheels was the top downloaded iPhone game in over 20 countries, including the United States, United Kingdom, Japan, Germany and Australia. Its immediate popularity was enough to propel the game to the #2 spot for worldwide downloads on the iOS App Store for all of August, even though it was available for less than two weeks. 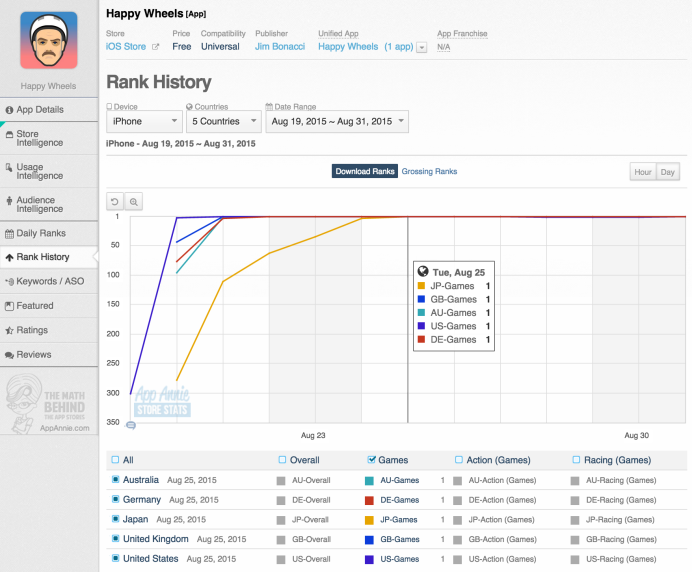 Soon after its launch, Happy Wheels was #1 downloaded game on the iOS App Store in the United States, United Kingdom, Japan, Germany and Australia.

Similar to the web version, Happy Wheels for iOS allows users to create and save their own levels which can be played by others. For now, users of the mobile version can only share their levels directly with their contacts. However, the publisher plans to update the game with functionality allowing players to browse for user-created levels; in addition to rolling out new levels, new characters and an Android version.

Happy Wheels’ success draws some interesting parallels with that of Agar.io, which we covered in July. Both titles were originally web-based games that developed a strong buzz and loyal following. They were then able to capitalize on their popularity and garner immediate success after launching on mobile. Jim Bonacci’s Happy Wheels and Matheus Valadares’ Agar.io (published by Miniclip) provide further proof that there are still plenty of opportunities for indie designers to find success among the big, established players.

For the complete list of August’s top games and game publishers around the world, click the chart above.