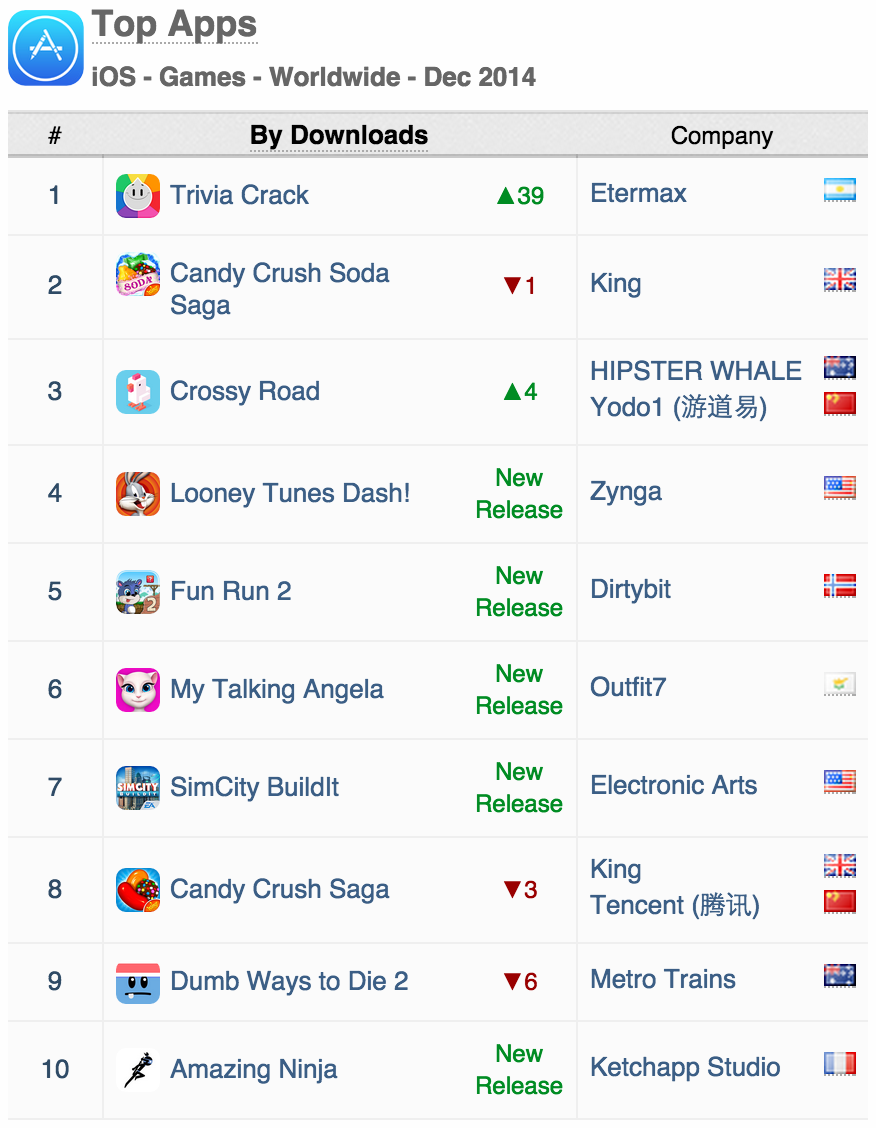 Trivia Crack, developed by independent studio Etermax, soared to the top of the iOS download rankings in December. The app deeply integrates social elements as gameplay relies on challenging friends from connected social networks. Inspired by the popular board game Trivial Pursuit, players begin by spinning a wheel (named Willy) to answer questions in one of six categories (Science, Entertainment, Art, Geography, Sports and History). When a category is won, the associated character is unlocked and the first player to acquire all six characters wins. The combination of social integration and engaging gameplay helped Trivia Crack surge on the iOS App Store in December, particularly in the US. Etermax claims that Trivia Crack saw 700,000 daily downloads in the US across all platforms. 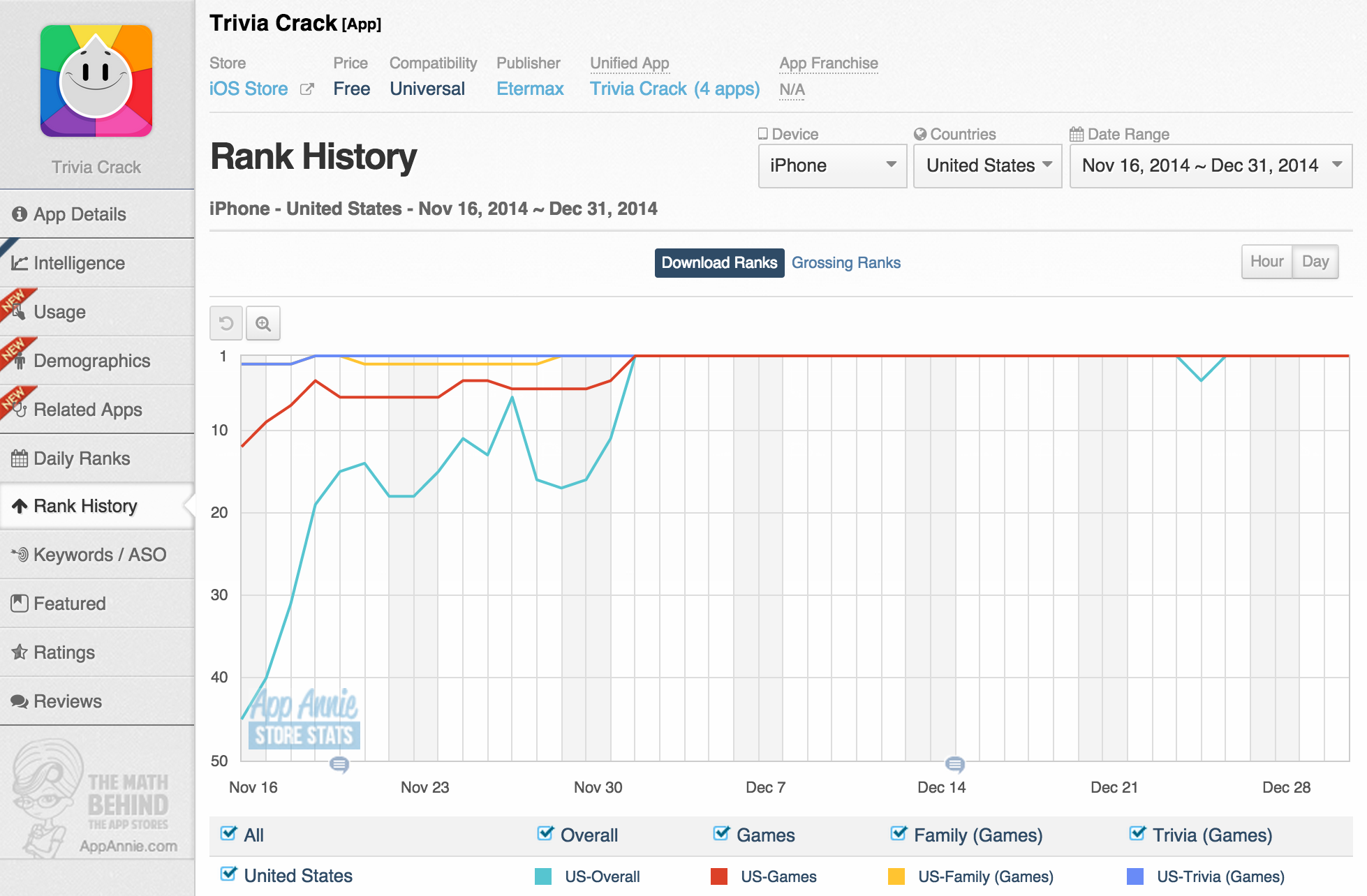 Trivia Crack shot to the top of the download charts in the United States.

The app’s popularity did not go unnoticed by platform owners as Trivia Crack made an appearance on the “Best of 2014” lists on both the iOS App Store and Google Play. The increased visibility contributed to Trivia Crack’s exceptionally strong December and helped Etermax reach the milestone of 100 million worldwide users on New Years’ Eve.

My Talking Angela Charms Her Way to the Top 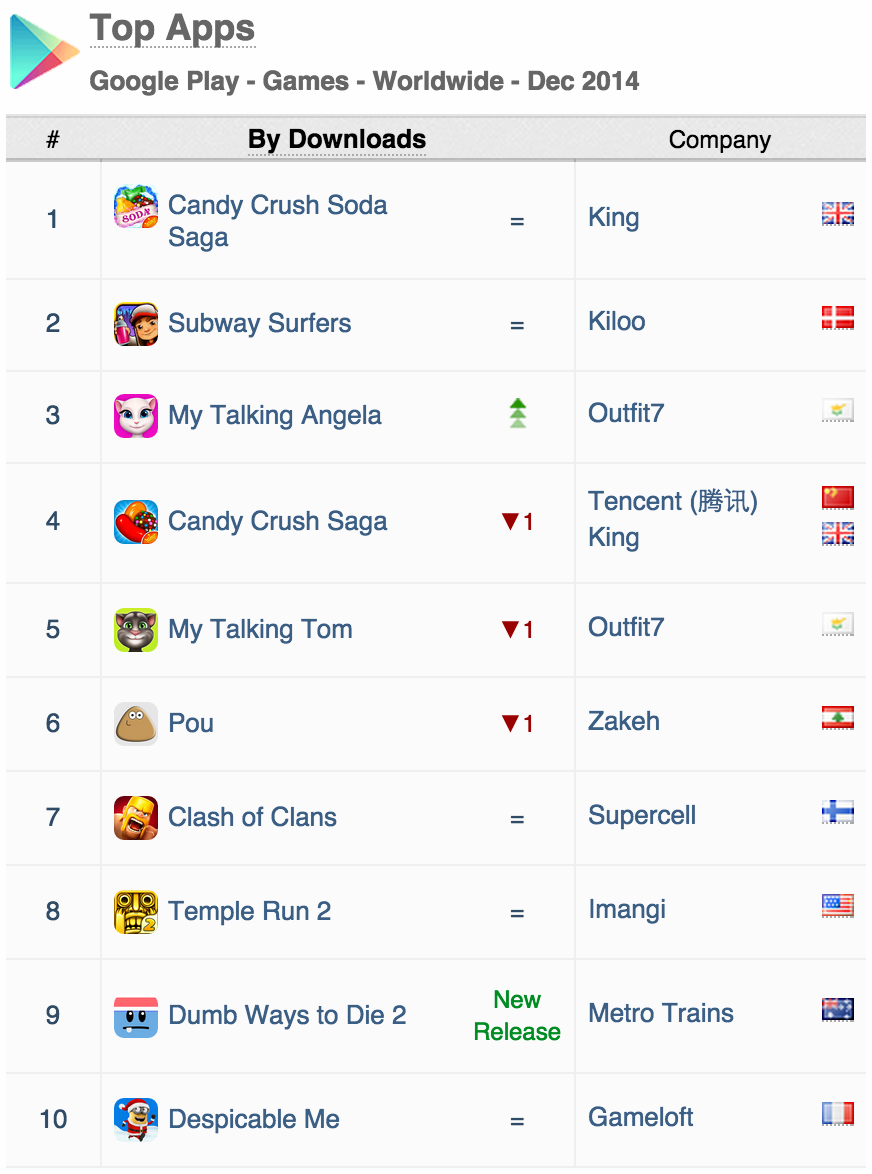 Last year, Outfit7 expanded their popular Talking Tom franchise to the virtual pet genre with My Talking Tom. The game, focused on children, let players adopt Tom as a kitten and care for him as he grew into an adult cat. With the launch of My Talking Angela, Outfit7 seems to be doubling down on the female demographic. This strategy seems to be working as the title immediately shot into Google Play’s top download charts for December.

My Talking Angela has received strong reviews on the Google Play Store.

The app allows players to care for their kitten as she progresses through nine stages of growth, including baby, toddler, tween and adult. A significant portion of app’s gameplay and monetization are focused on dressing Angela in the latest fashions and decorating her room. This synergy between the app’s demographic focus and gameplay has helped My Talking Angela receive strong reviews on Google Play. 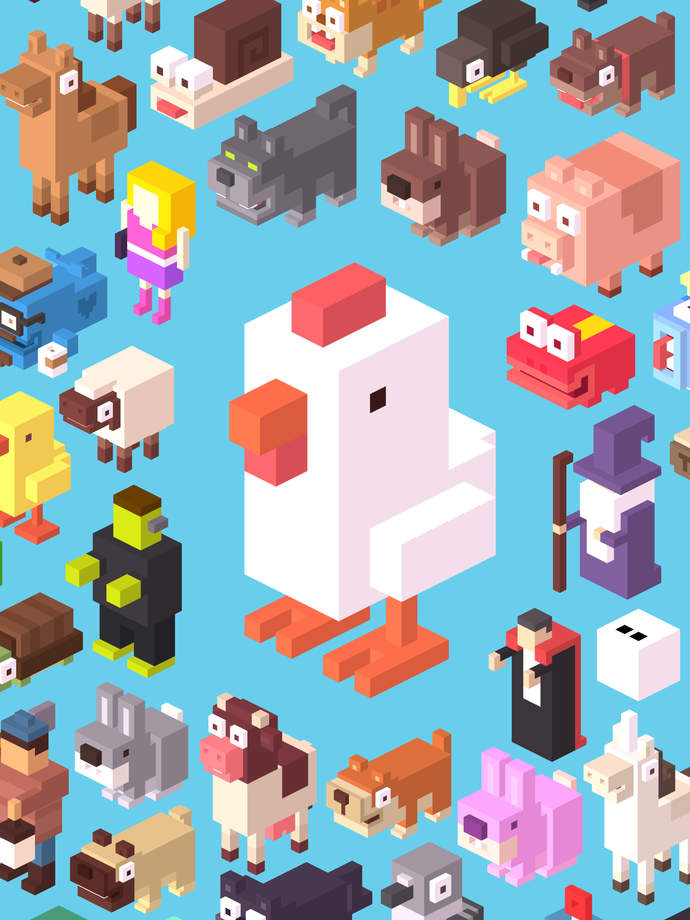 Crossy Road’s in-game characters are a key part of its engagement and monetization strategy.

Crossy Road, an endless arcade hopper with gameplay reminiscent of Frogger, continued to climb the app store charts in December. The goal of the game is to get as far as possible while randomly generated obstacles, such as cars, trains, eagles and rivers, impede your progress. However, the most interesting aspect of Crossy Road is the focus on in-game characters that can be unlocked or purchased. Each character changes the game in subtle ways, which allows for a consistently novel experience. The game also received a boost when PewDiePie, a popular YouTube celebrity, featured it. This has helped Crossy Road reach the top of the app store charts in developed markets like the United States, United Kingdom and Canada. 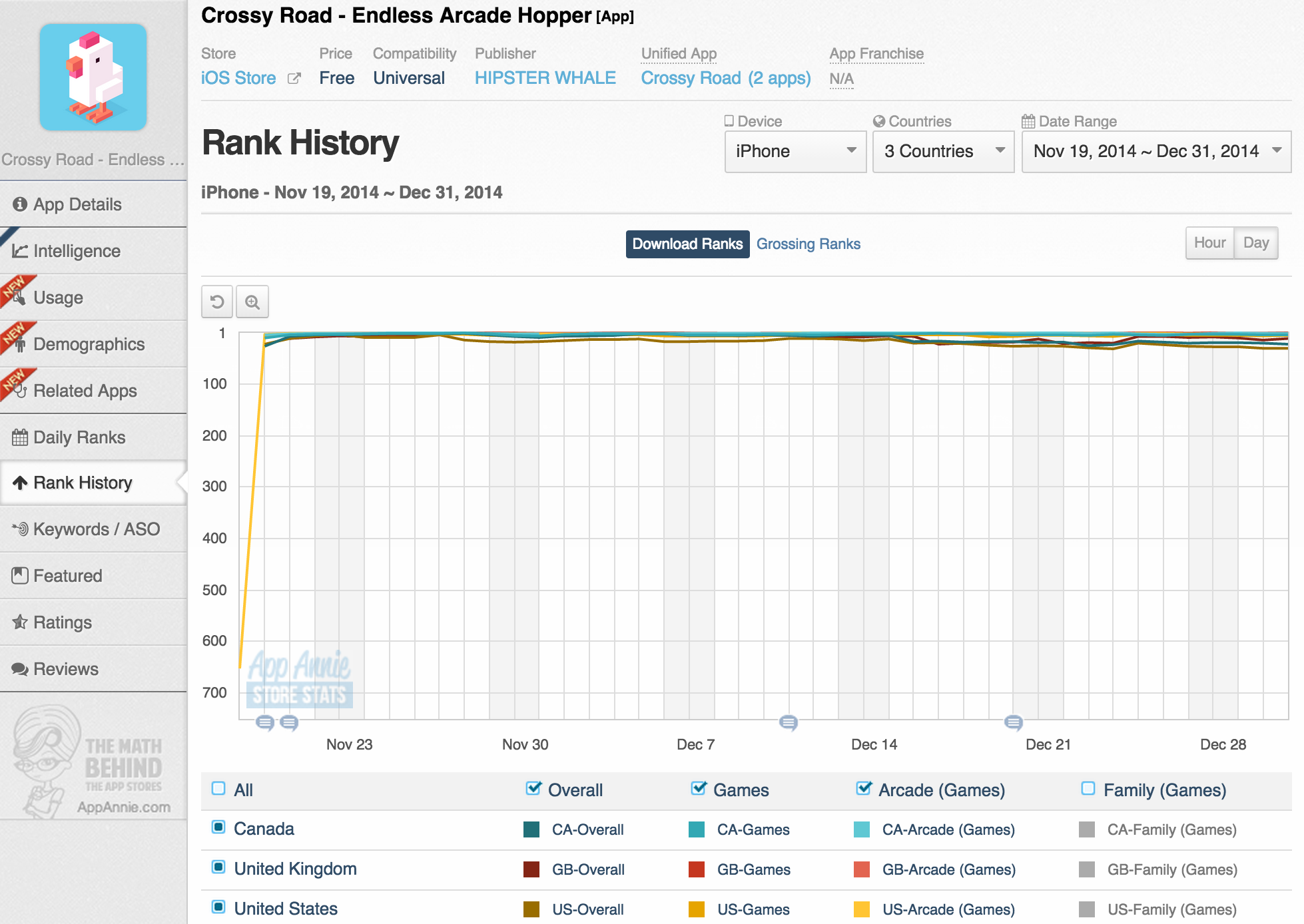 Shortly after its launch, Crossy Road hit the top of the iOS charts in developed markets like the United States, United Kingdom and Canada.

Crossy Road’s monetization strategy is also somewhat unique. While it relies on in-app purchases, there are no restrictions on lives, play attempts or time. Instead of catering to these use cases with in-app “consumables”, the app monetizes purely through the sale of in-game characters. Since new characters have an impact on gameplay, this also has the secondary benefit of increased engagement. We are interested to see if this spin on the in-app purchase revenue model finds more takers. 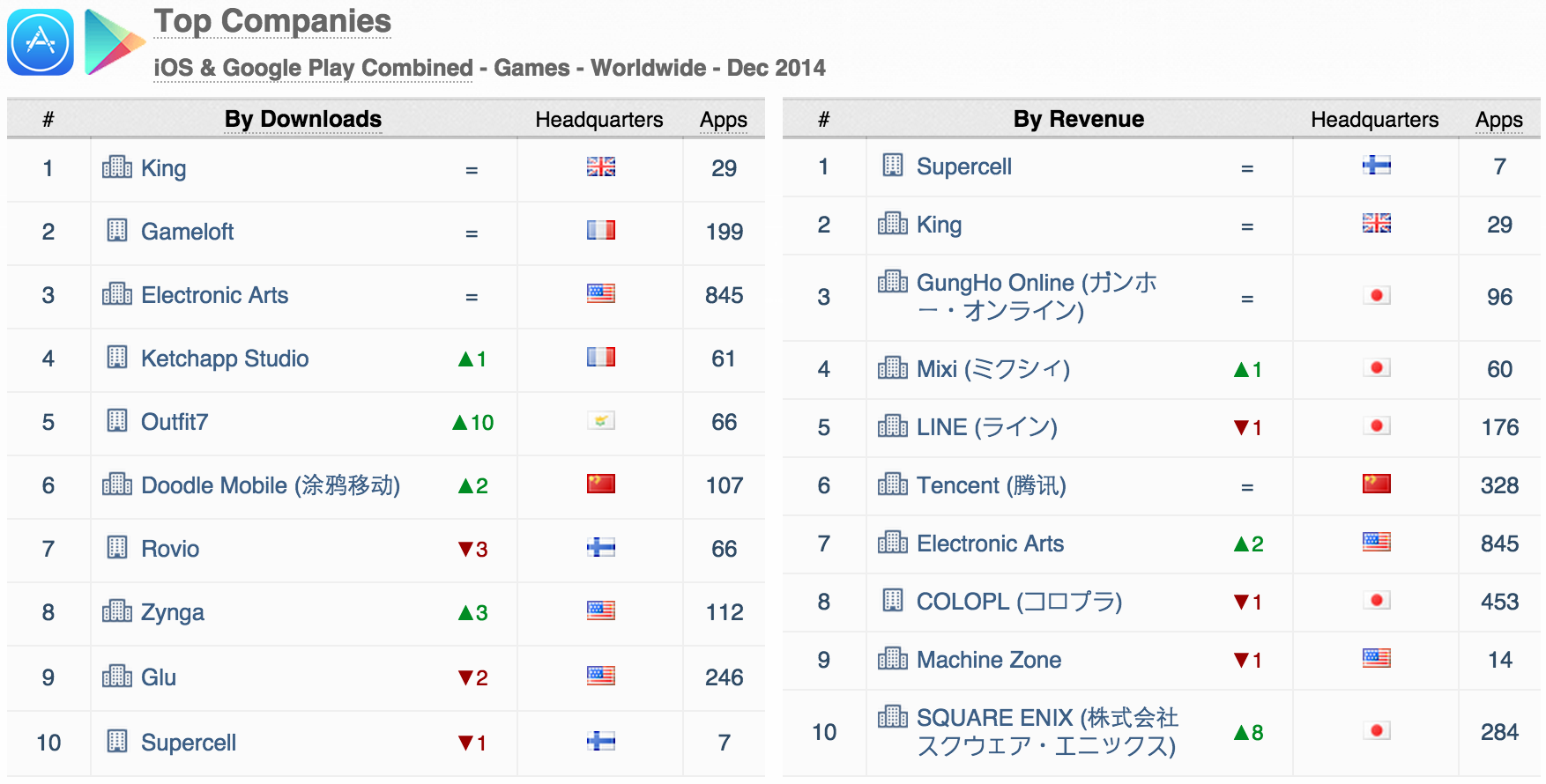 For the complete list of December’s top apps and publishers around the world, click the chart above.