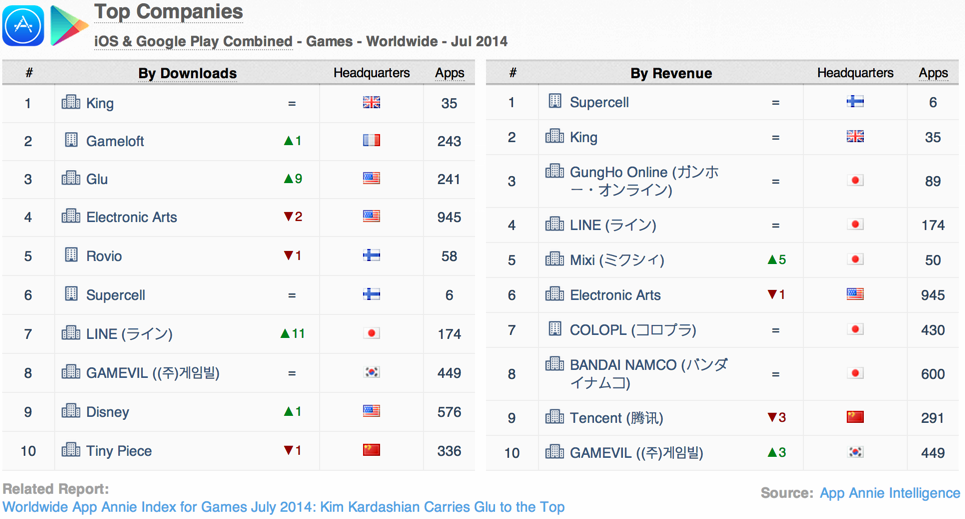 For the complete list of July’s top apps and publishers around the world, click the chart above. 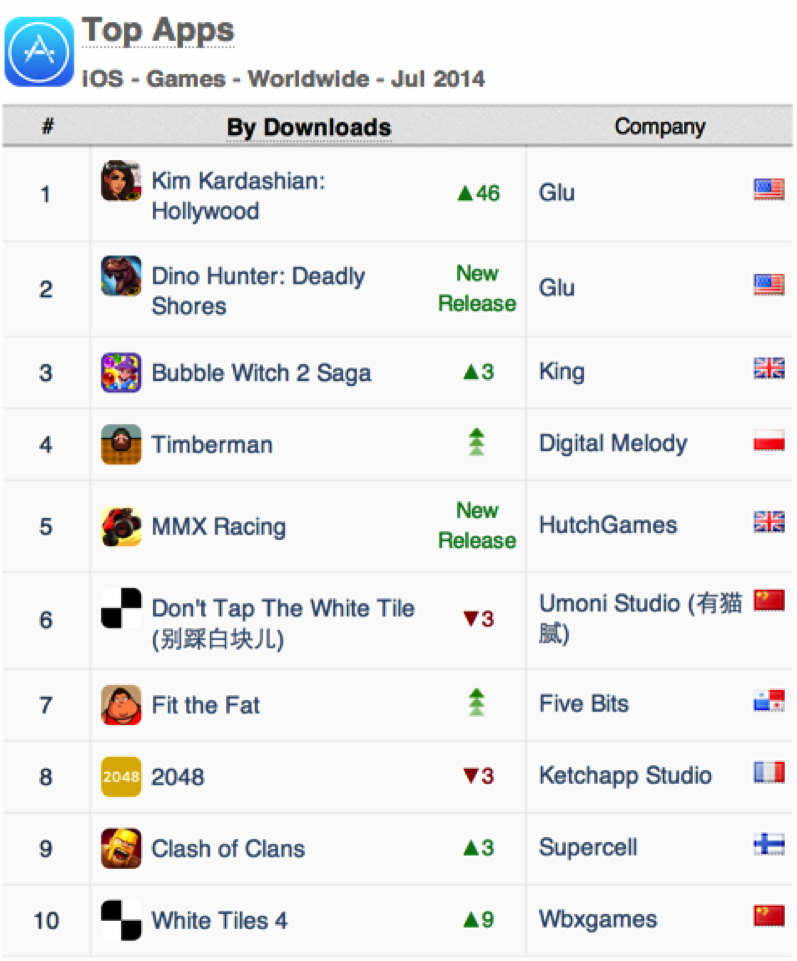 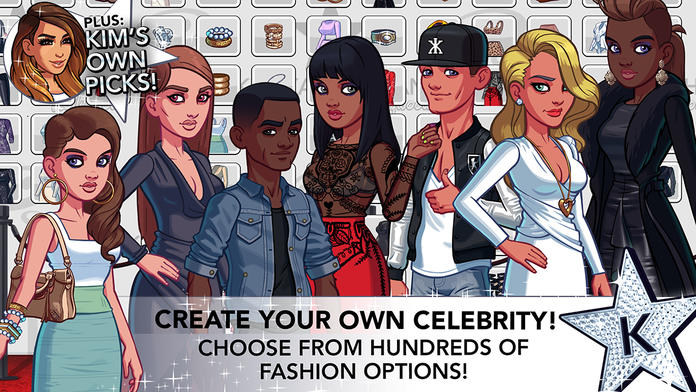 Players choose their own path to A-list stardom with a little celebrity help in Kim Kardashian: Hollywood.

Surrounded by serious mainstream news coverage, Kim Kardashian: Hollywood snagged a spot in the top 5 for United States iPhone overall downloads almost immediately after launch and ended July as the #1 downloaded game on iOS. Kim Kardashian: Hollywood even made a splash in the iOS revenue rankings, leaping up the charts to finish July as the #10 iOS game by monthly worldwide revenue. Incredibly, the game garnered over 68,000 reviews in the month of July -- more than all the other new releases in the iOS top 10 by downloads combined. The mainstream adoption and monetization of Kim Kardashian: Hollywood could open the floodgates for future celebrity-publisher partnerships. 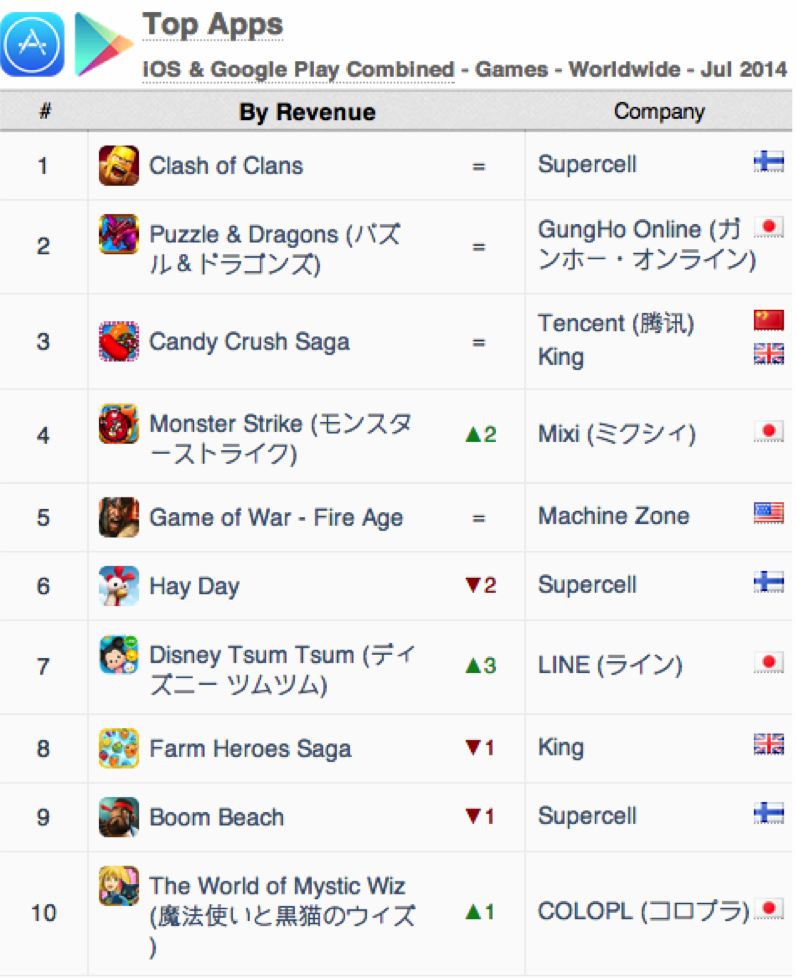 LINE’s Disney Tsum Tsum rose in the revenue rankings for both iOS and Google Play thanks in part to the global release of the previously Japan-only title on July 1. In conjunction with the game’s release in the United States, Disney introduced 30+ “Tsum Tsum” plush toys through its massive distribution network encompassing e-commerce, retail stores and theme parks. As of July, the plushes had sold more than 1.6 million units since their debut in the Japanese Disney Store last October. The global version of Disney Tsum Tsum rose quickly in the download rankings in Taiwan to snag a top 5 spot in iPhone downloads, while download growth in the United States coincided with mainstream news coverage in mid-July. The Japanese version remained the main growth driver, as its numbers in Japan grew impressively month-over-month to finish #1 overall in combined iOS and Google Play downloads in July and #3 overall by revenue. 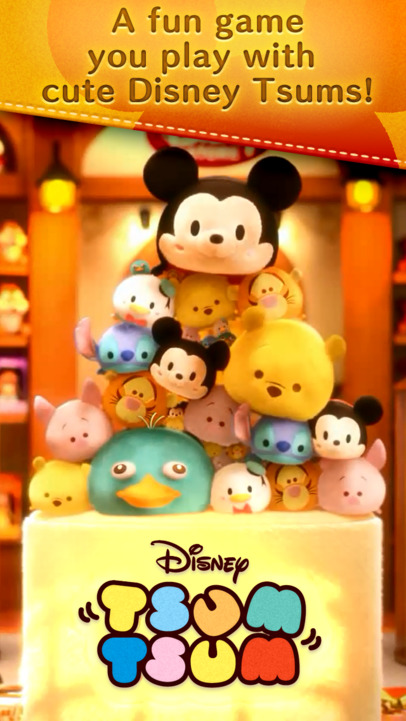 The gameplay offers a refreshing change from the standard puzzle-matching genre -- the round Disney character heads pile up randomly in a wide bowl as players frantically chain together big combos as the 60-second timer counts down. Disney Tsum Tsum monetizes through the purchase of additional Disney and Pixar Tsum characters, each with their own special power in the game. 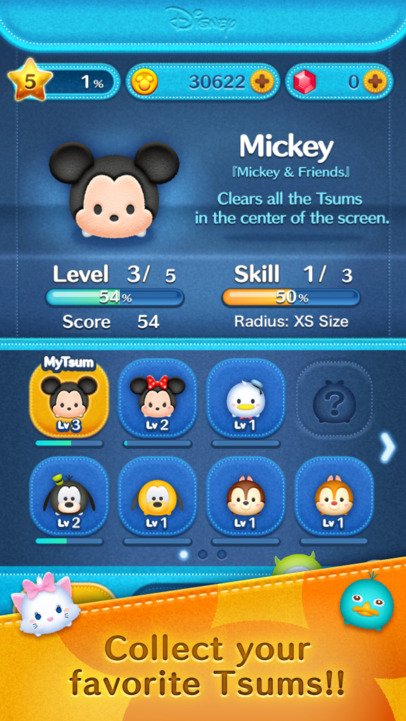 When App Annie asked about LINE’s overall expansion strategy, Chief Strategy and Marketing Officer Jun Masuda had this to say:

"LINE is expanding its mobile platform by offering various integrated services and content such as LINE GAME, centered around its core focus on communication. LINE: Disney Tsum Tsum, a game released on our platform, has now been released in western markets in addition to Japan and the rest of Asia, and is performing strongly. We will continue to concentrate on the expansion of the platform, and will work with game companies around the world to add mid-core games such as RPGs to our lineup in order to supplement our offering of casual games." -- Jun Masuda, Chief Strategy and Marketing Officer at LINE

Transformers Roll Out on Mobile

Mirroring the incredible opening weekend of the movie, Transformers: Age of Extinction had a similarly fast start on mobile, quickly entering the top 5 Google Play rankings for United States downloads. Its rise in the download rankings directly coincided with the United States movie release on June 27. Outside of the United States, Transformers: Age of Extinction achieved high downloads in Mexico, Thailand and other markets, with some success on the app store attributable to country box office success, like in Mexico. 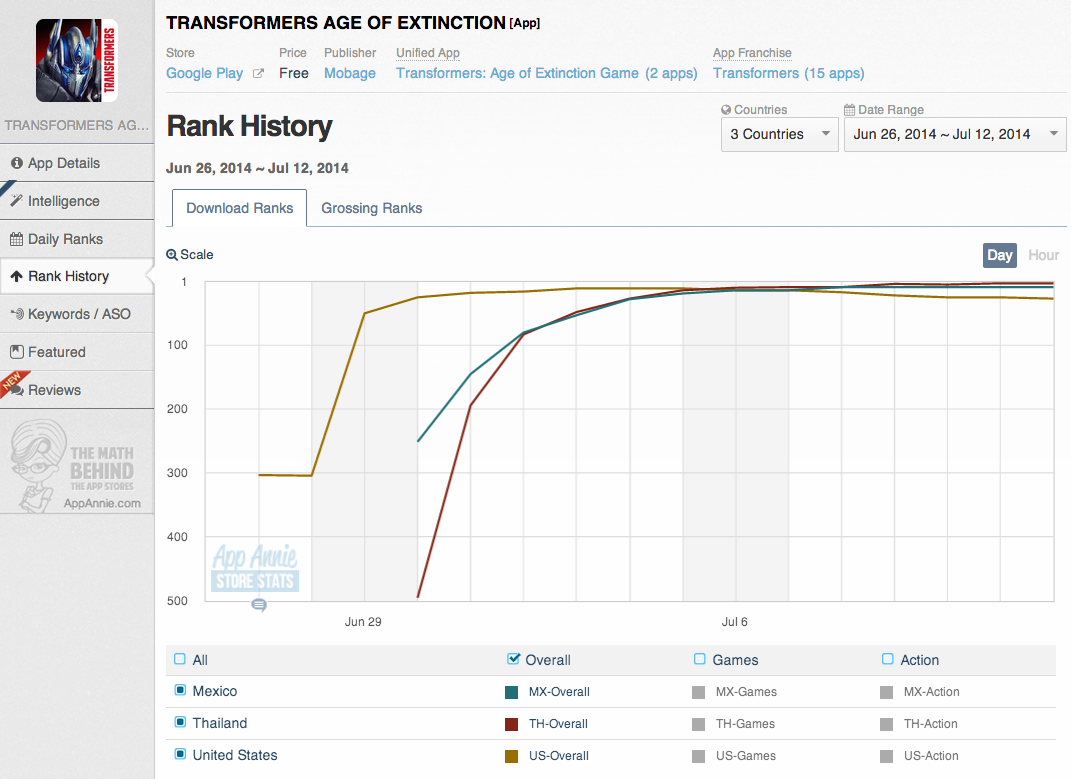 Transformers: Age of Extinction shot up the Google Play download ranks in several countries after the movie released.

Published by DeNA a week before the movie hit theaters, Transformers: Age of Extinction received coverage on the Google Play homepage and accumulated a huge number of high ratings through the end of July, just as Kim Kardashian: Hollywood did on iOS. Aside from Transformers, there have been a number of recent successful games with movie tie-ins, such as last year’s mega-hit Despicable Me: Minion Rush as well as Disney’s more recent Frozen Free Fall and Maleficent Free Fall. We analyze their specific impact on the Japanese mobile gaming market in our Japan App Annie Index for Games.

Supercell’s Clash of Clans continues to rise in Japan, solidifying its position as the top grossing game worldwide across iOS and Google Play. In a recent development, GungHo Online, developer of Japanese mega-hit Puzzle & Dragons, sold its jointly acquired stake in Supercell to parent company SoftBank. Combined with its already significant portion of Supercell, this sale will give SoftBank control of 51% of the Finnish studio. With its substantial investments in two of the hottest game properties in the world, SoftBank continues to strengthen its position as one of the premier mobile companies in the world.

Timberman Chops Its Way Up

"Timberman did great right from the start. It launched the same day we presented it at Digital Dragons in Cracow, so many people in the industry helped spread the news about this game they'd never heard about via their social channels. Meeting people face-to-face works better than sending emails if you want to accomplish something, so we try to attend conferences to promote our work. Timberman is a game where people compete with themselves or challenge their friends. In fact, one of our best ideas was letting users share their score on Twitter with a "Can you beat me?" message and game download link. It was a great way to create social buzz around the game by helping people challenge their friends via their own profiles." -- Pawel Kitajewski, creative director at Digital Melody

Bubble Witch 2 Saga continued to climb the charts in July, building on last month’s top 10 finishes on both iOS and Google Play by downloads. A majority of the growth in July came from Google Play downloads in Mexico, where the game spent significant time as the #1 ranked game by downloads. iOS growth was driven mainly by the United States -- the United Kingdom and France also contributed substantially. Bubble Witch 2 Saga is King’s first sequel game, with Candy Crush Soda Saga, the follow-up to smash hit Candy Crush Saga, currently in soft launch. It will be interesting to see if Bubble Witch 2 Saga’s success up to this point will open up the conversation for sequels for other strong King games in the future.

Zynga was another parent company that saw a spike in downloads from a paid-to-free pricing strategy of their officially licensed Jenga game, much like Halfbrick did in June with its portfolio-wide switch to freemium. Jenga integrates intuitive touch controls, gyroscopic rotating views and online multiplayer modes to provide a well-received 3D adaptation of the physical wooden tower strategy game. The promotion boosted Jenga into the overall top 5 iPhone apps in the United States by downloads after it took effect mid-July, and was a major contributor to Zynga’s six-spot rise in the worldwide game download company rankings.

For those of you who are also looking for an update on top apps outside of games, please check out the July 2014 App Annie Worldwide Index for Apps. To keep up-to-date with all the changes at the top of the app and publisher charts, check out the complete set of App Annie Index tables.