Clash of Kings Continues Its Conquest 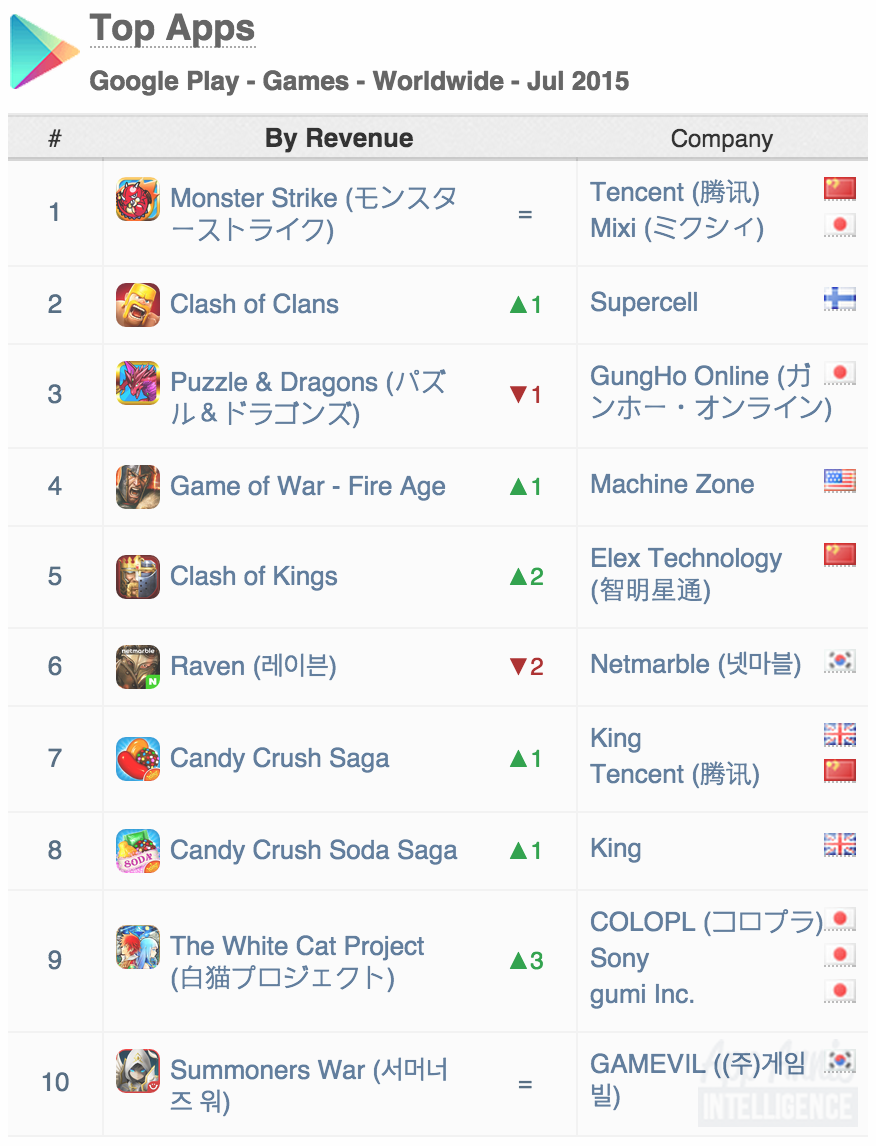 Coming in at #5 in our worldwide Google Play revenue rankings is Chinese publisher Elex Technology’s Clash of Kings. Likely thanks to recent TV ad campaigns, it has been steadily climbing since first appearing on this year’s May Index at #8. The base building game has players construct kingdoms to vie for dominance against one another online in real time.

Geographically, the distribution of the game’s success is not surprising. The game is earning major revenue from the United States, Taiwan, South Korea, Russia and Japan. These are all strong markets for similar games, such as Clash of Clans and Game of War – Fire Age. 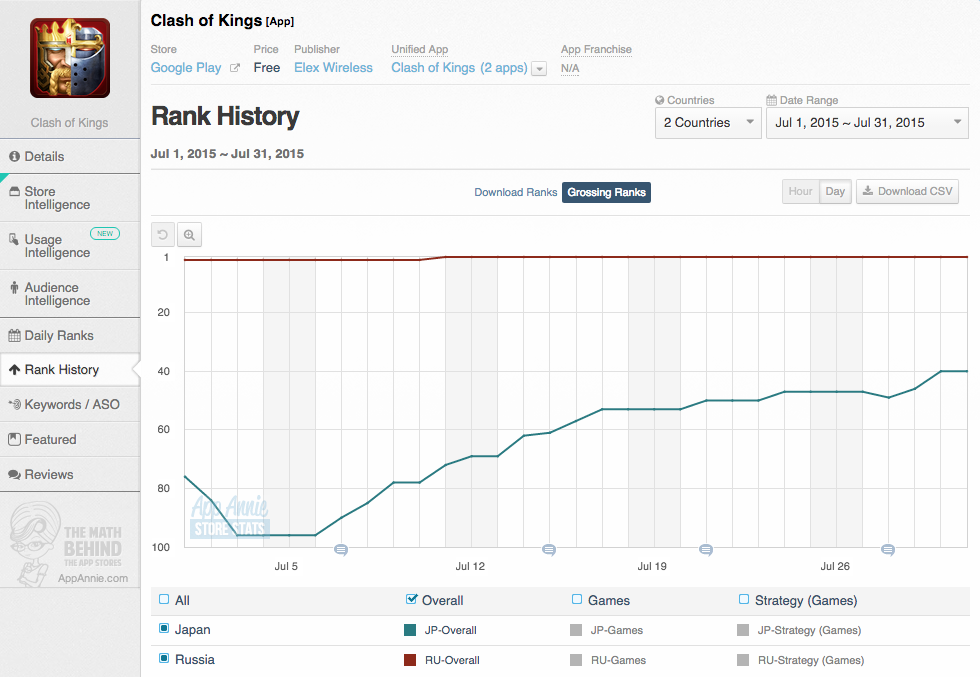 In daily Google Play revenue, Clash of Kings held on to the top spot in Russia and also saw while it saw increasing success in Japan.

The game dominated in Russia, holding its position as the top grossing Google Play app for most of July. In Japan, it steadily climbed the daily ranks throughout the month. Overall, Clash of King’s global ascendance puts it hot on the tails of mobile’s biggest strategy games like Game of War – Fire Age, which ranked #4 by Google Play revenue for the period.

Agar.io Soaks Up the Downloads 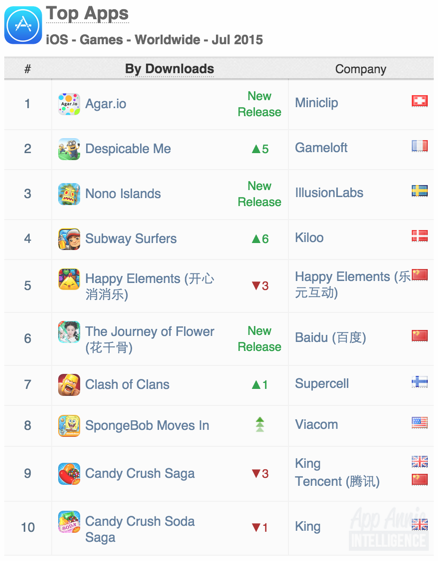 In July, we wrote about the key reasons that lead to the meteoric rise of Agar.io, the smash hit casual game on iOS and Android. Unsurprisingly, the game’s success last month landed it at #1 by worldwide iOS downloads. 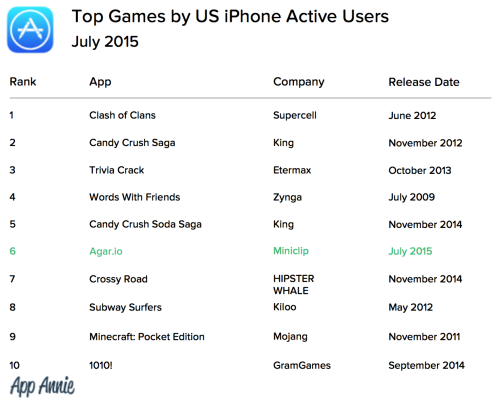 In July, Agar.io attracted levels of users comparable to some of the App Store’s most popular games.

For the month of July, Agar.io ranked #6 among games by US iPhone usage penetration. In the Top 10 table above, Agar.io is the only game released in 2015, which speaks to the game’s astonishing virality. Readers interested in learning more about how Agar.io attracted so many users should read our deep-dive on the game.

Despicable Me and SpongeBob Make a Resurgence

While the App Annie Index usually focuses on breakaway hits, sometimes a previously successful game has new life breathed into it. This happened twice in July, with Gameloft’s Despicable Me and Viacom’s SpongeBob Moves In coming in at #2 and #8, respectively, by iOS worldwide downloads. Both of these games were initially released in mid-2013 and demonstrate the strong staying power of games based on popular intellectual properties. 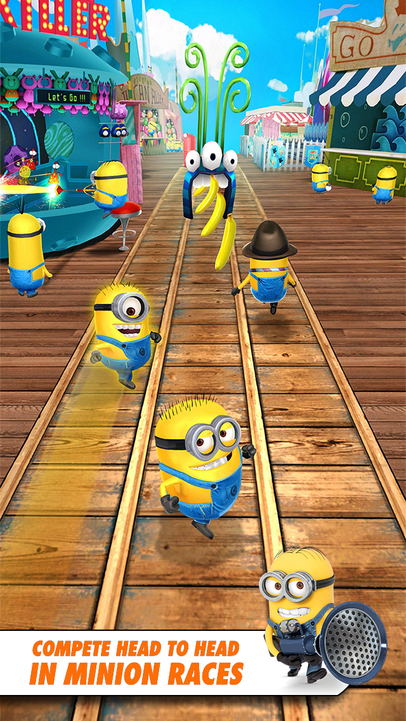 One likely cause of Despicable Me’s renewed success is the new Minions spin-off movie released in July. This film and its marketing sparked interest in the game, which we previously wrote about in August 2014 when it reached #6 by worldwide iOS downloads. A June 23rd update, which brought a new racing game mode, also seems to have helped the game’s success in July. 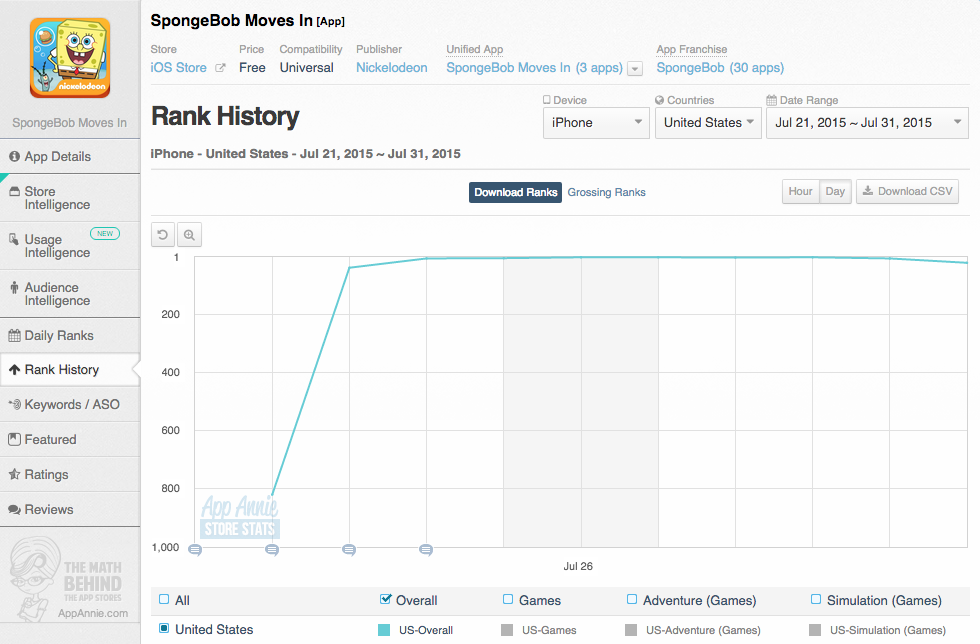 SpongeBob Moves In flew up the iPhone download ranks after becoming a free app.

Originally, SpongeBob Moves In became free as Apple’s App of the Week. That the game remains free weeks later speaks to the dominance of the freemium paradigm in mobile gaming today.

For the complete list of July’s top games and game publishers around the world, click the chart above.