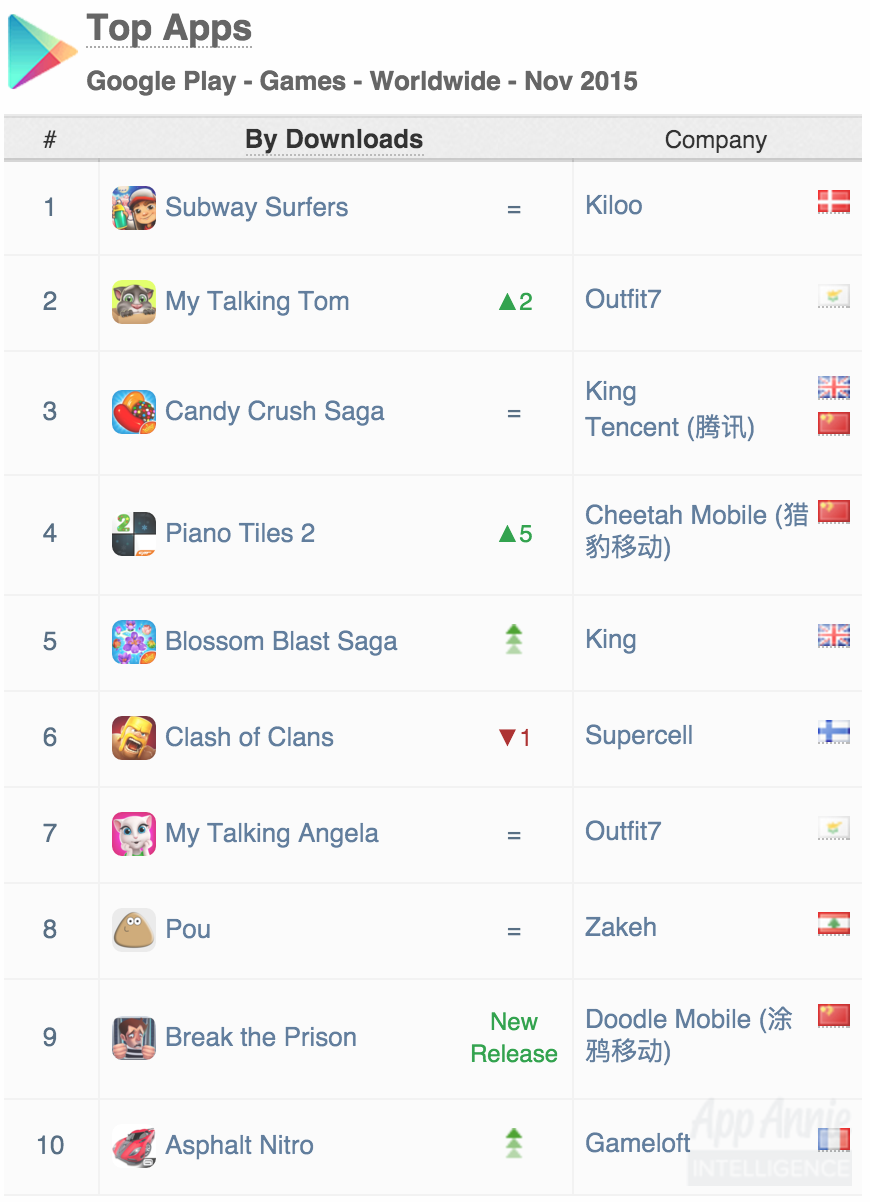 King’s newest title, Blossom Blast Saga, raced up the Google Play download charts to grab the #5 spot in November. The title also performed exceptionally well on iOS, ranking among the top 5 most-downloaded games in November. Like King’s other Saga games, Blossom Blast Saga relies on the series’ familiar match-three game mechanics, except with a floral theme. The game’s initial success was spread globally as it ranked among the top 10 Google Play games by daily downloads in more than 50 countries. 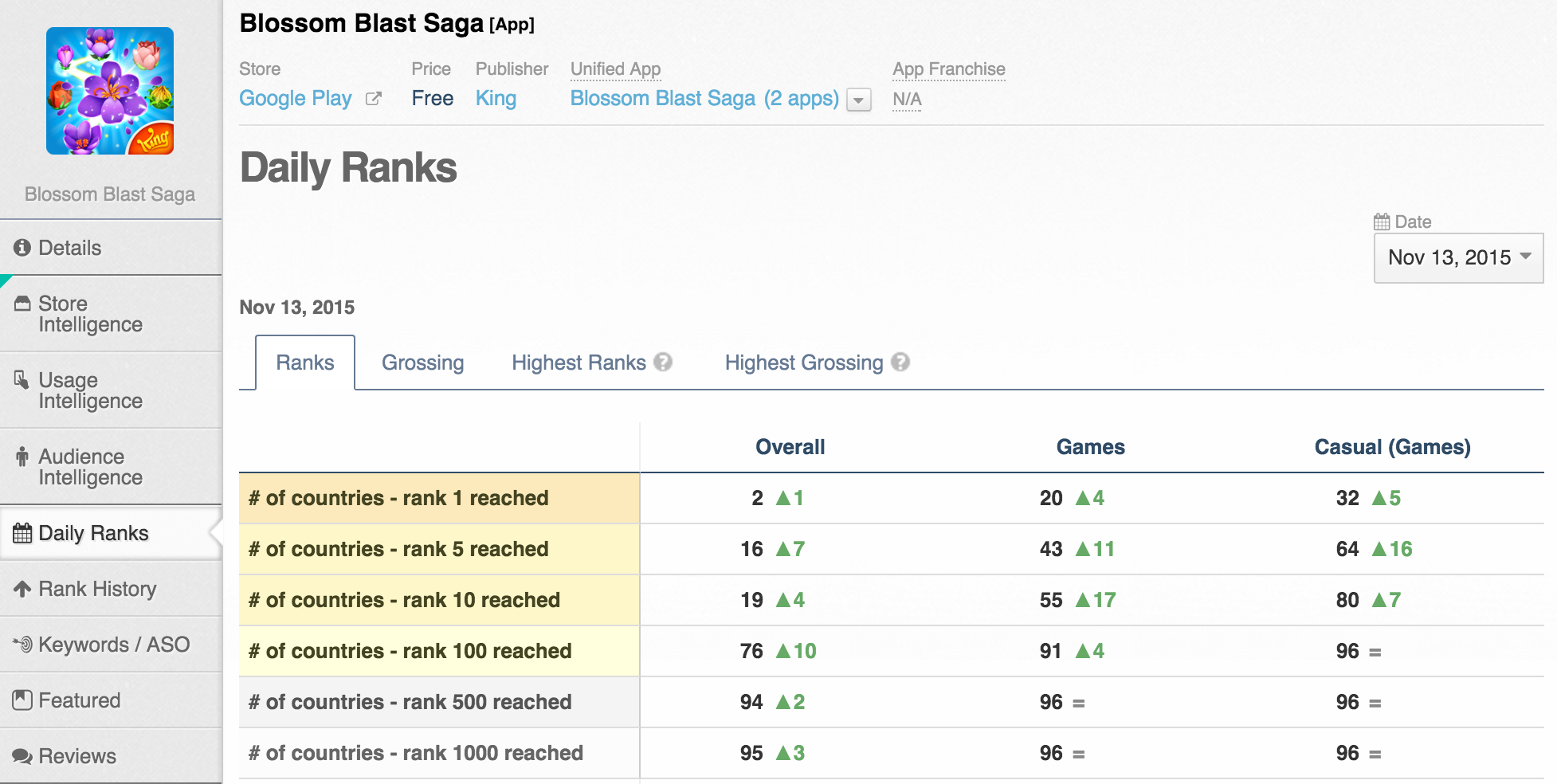 Blossom Blast Saga was also recognized by Facebook as one of the best Facebook integrations in 2015. The ability to leverage social networks to drive user acquisition and engagement makes King a veritable hit machine. This was one factor behind Activision’s mammoth $5.9 billion acquisition of the mobile gaming behemoth. Judging by King’s continued success, mobile could soon become one of Activision’s most visible business segments.

Hero MOBA Surges in the East as Tencent Looks Westward

With We MOBA, Tencent has already tasted success with the Multiplayer Online Battle Arena (MOBA) format. Its latest MOBA game, Hero MOBA, debuted in late October and climbed 32 places on this month’s iOS App Store download charts to grab #3. The game’s performance on the Worldwide Index was solely driven by its spectacular performance in China. In fact, Hero MOBA ranked #1 among iPhone games in China by month-over-month (MoM) change in active users. 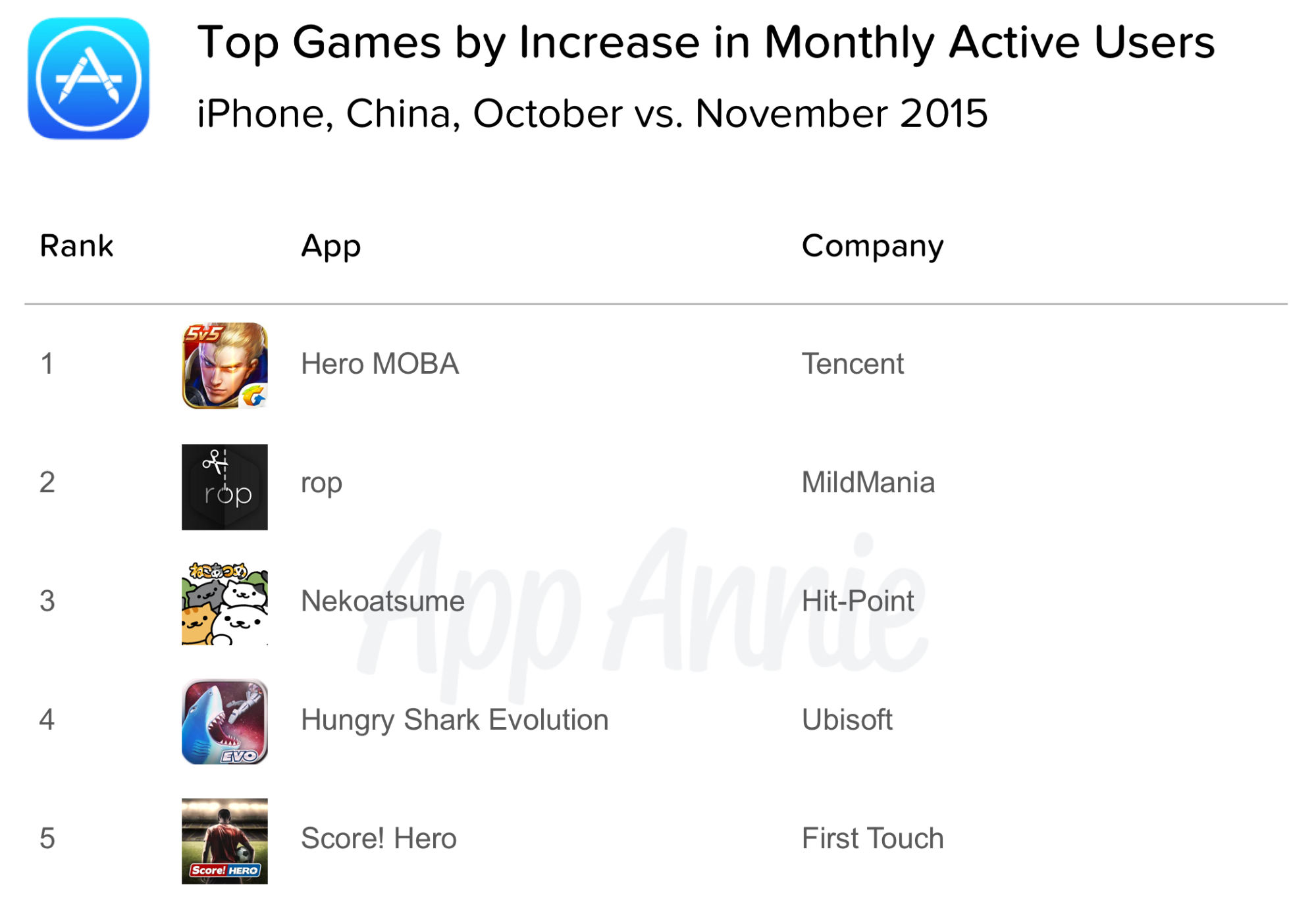 Hero MOBA’s rapid rise combined with previous hits like Legend of Mir 2 and We Fire truly demonstrates the power of Tencent’s brand in China. Rather than being content with domestic success alone, Tencent is also setting its sights on Western markets like the United States in partnership with Glu (thanks to its recent $126 million investment in the company).

This is an interesting trend reversal as Western companies usually look for a partnered approach to enter Asian markets. We will be watching Tencent’s progress very closely. 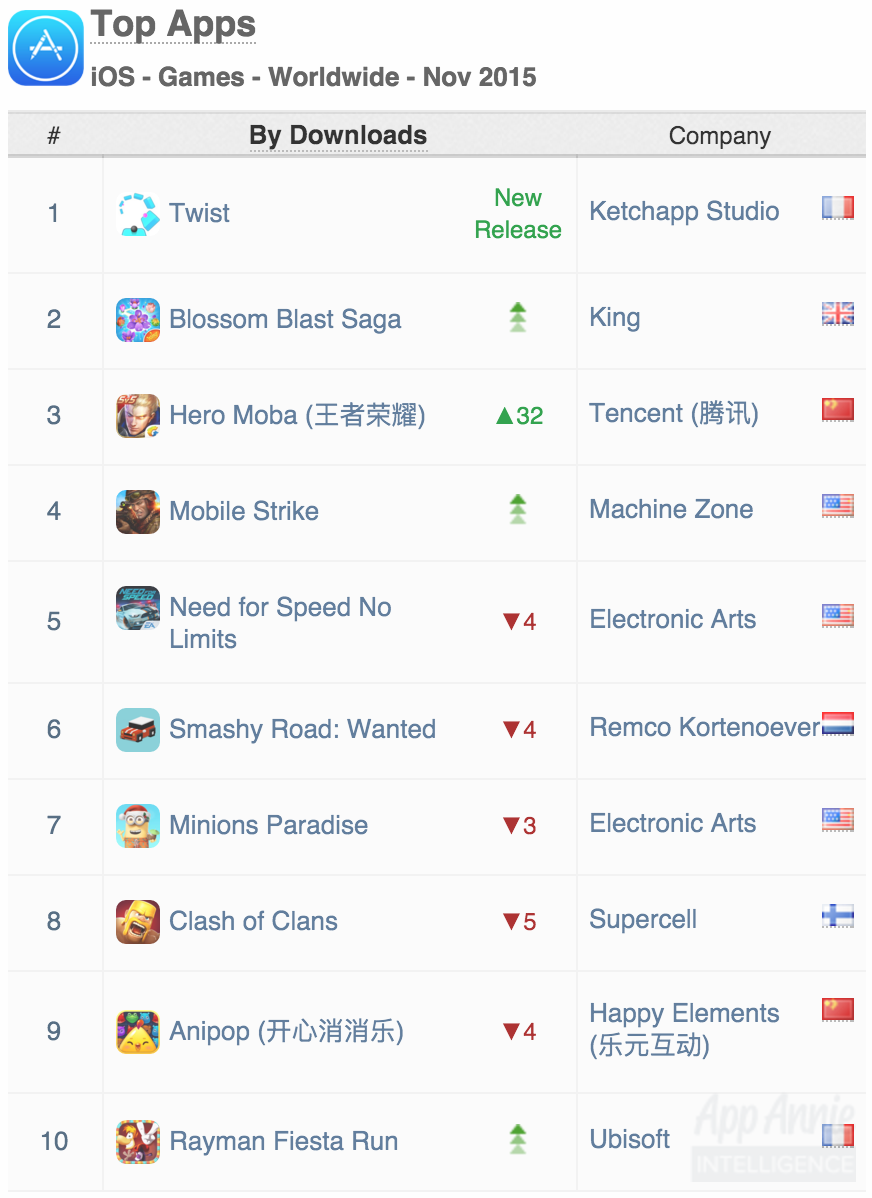 Mobile Strike, Machine Zone’s first follow-up to Game of War, made its official debut and grabbed the #4 spot on the iOS download charts in November. While its strategy-oriented gameplay is reminiscent of Game of War, its contemporary military battles form a stark contrast with the medieval theme of its predecessor. However, Mobile Strike bears other similarities with Game of War. For one, its early download success has already translated into strong revenue gains, especially in the United States and Japan. 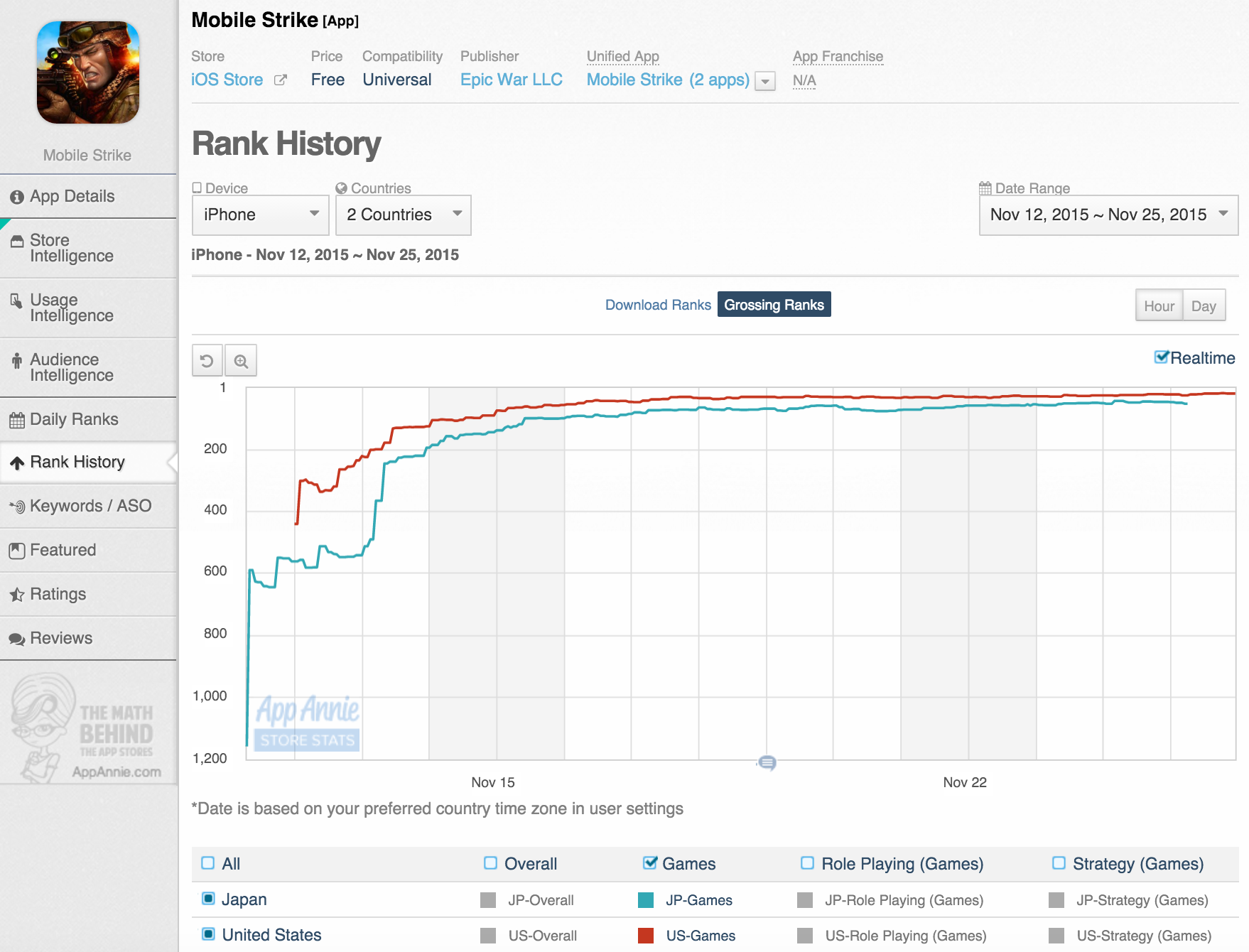 In addition to its download performance, Mobile Strike also became one of the top-grossing iOS games in the United States and Japan.

As we mentioned in the October 2015 Games Index, Mobile Strike has also emulated Game of War’s path to success by using celebrities to promote the game — in this case, former Hollywood action movie star Arnold Schwarzenegger. Given the tried-and-true nature of this strategy, we are curious to see if Machine Zone can repeat Game of War’s long-lasting success. 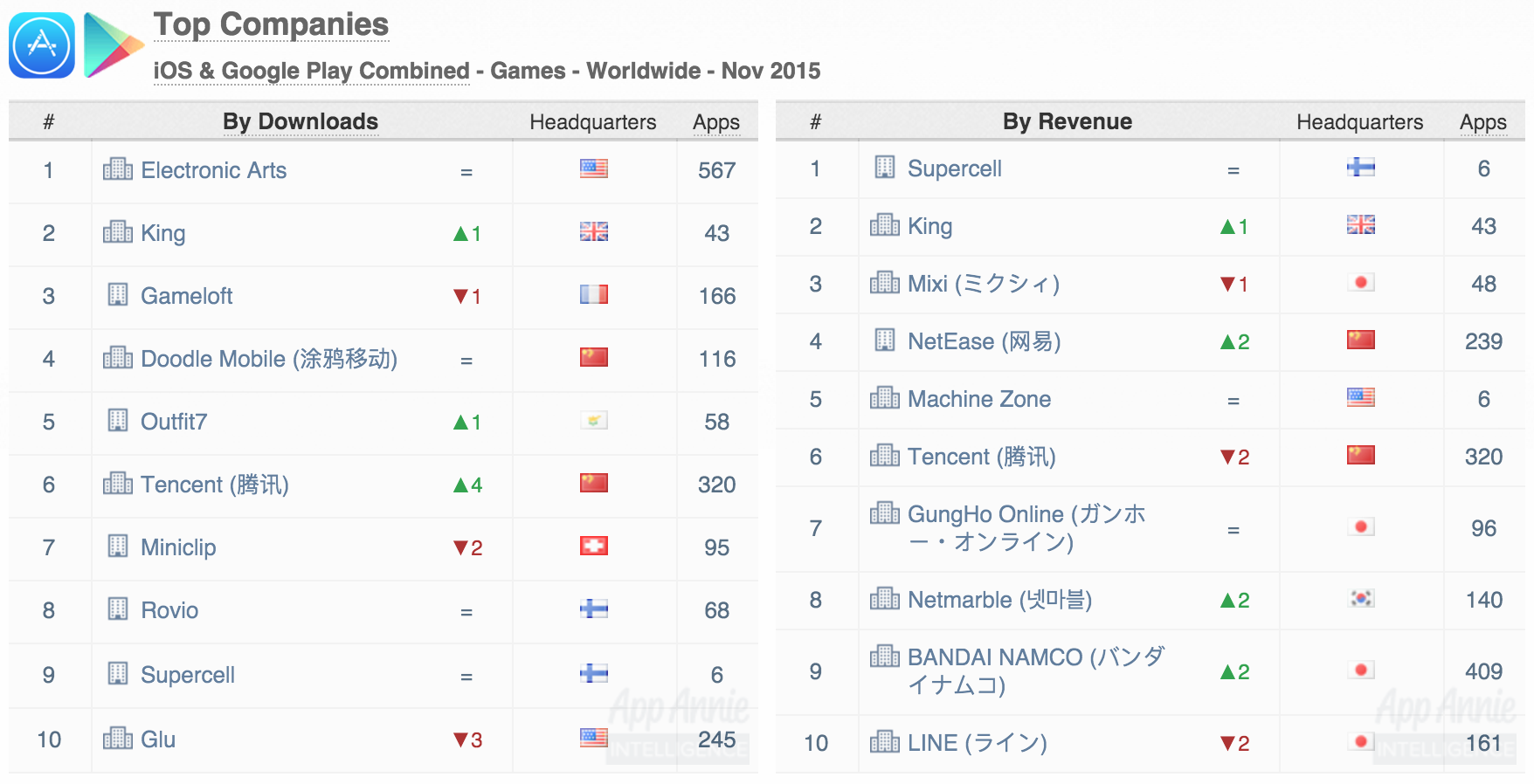 For the complete list of November’s top games and game publishers around the world, click the chart above.