Each month, the App Annie Index highlights the top-performing games and apps for the iOS App Store and Google Play. Our analysis covers trends among the leading apps across countries and categories, and is the industry standard for professionals looking to compare leading apps and publishers. To find out about current trends in other markets and app categories, please check out the App Annie October 2014 Apps Index, our report with Kantar Retail highlighting the top retailers in France and our special coverage of China’s 11/11 m-commerce event. 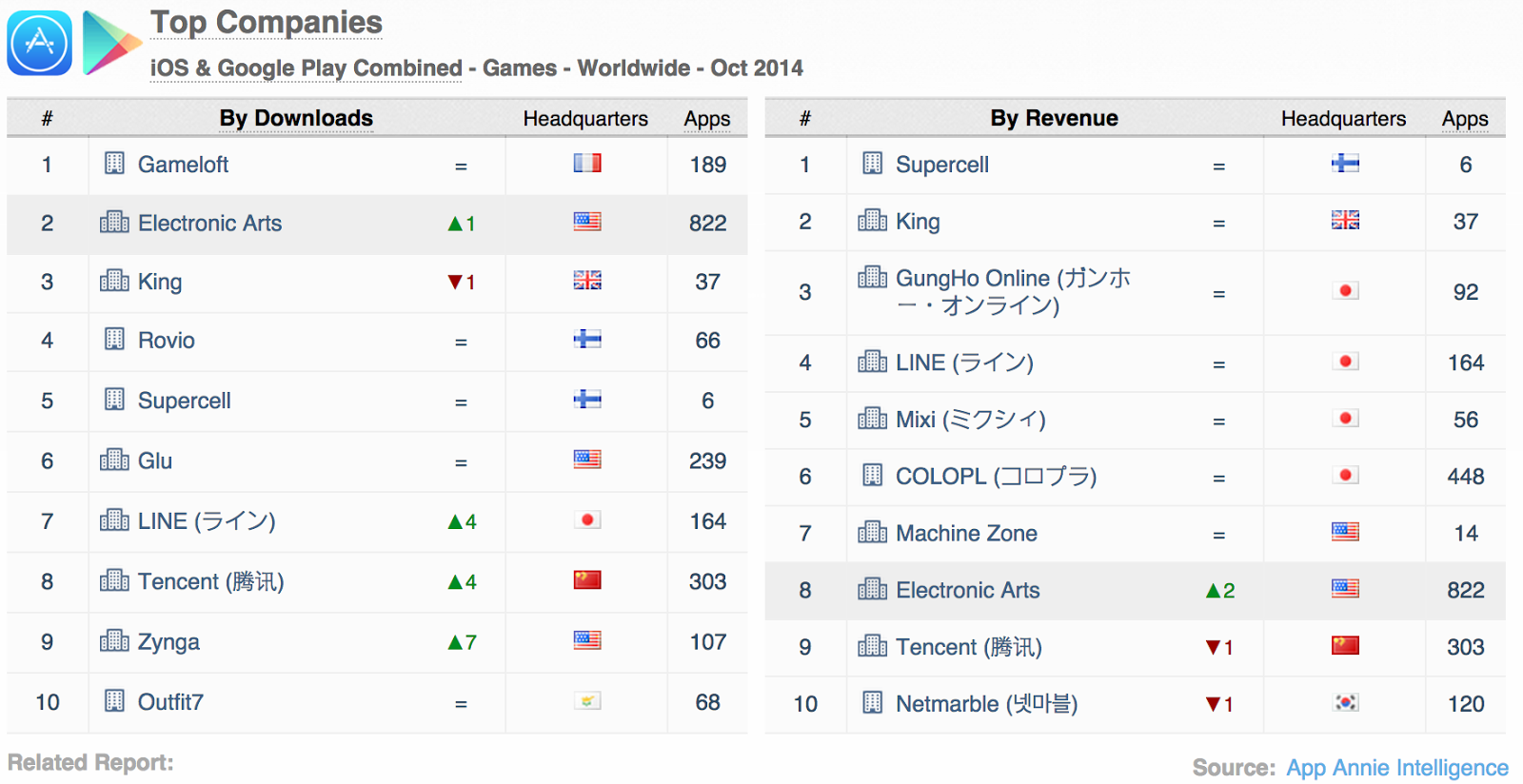 For the complete list of October’s top apps and publishers around the world, click the chart above. 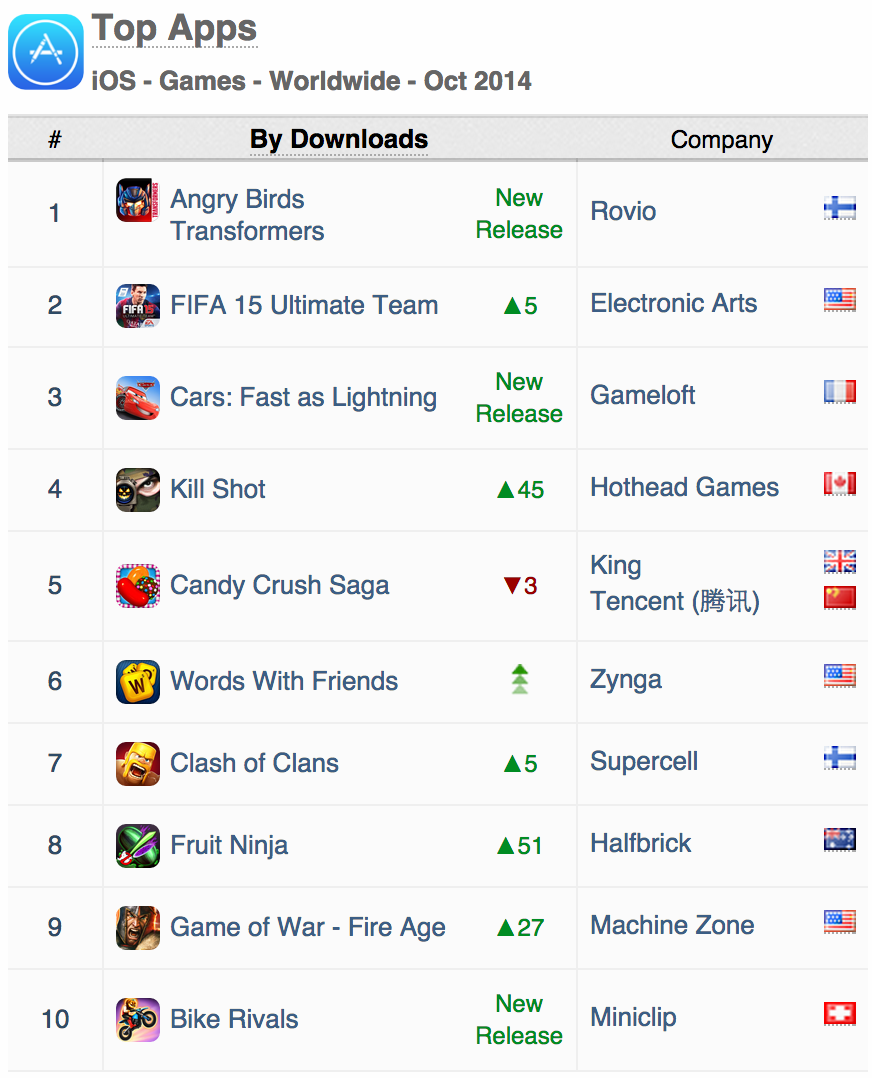 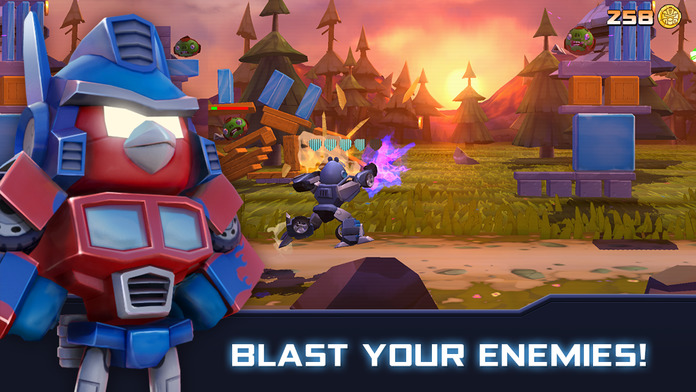 Up next, Gameloft continued its prolific run of IP hits as Cars: Fast As Lightning debuted at #3 on the download rankings for iOS games. With animation reminiscent of Pixar’s movie experience, the racing game has a clear focus towards a younger demographic. The gameplay also places heavy emphasis on customizing and building racing arenas based on movie locales. The title was heavily featured on the iOS App Store and performed extremely well across geographies, including the United States, China, Thailand and Russia.

Finally, Fruit Ninja shot up the download charts thanks to a pair of updates. The first update added a new in-game universe called Fruitasia, along with new characters and in-game equipment. Halfbrick followed this up with a movie-themed update on Ghostbusters’ 30th anniversary, which also happened to coincide with Halloween. This update added new artwork, music, ghostly fruit and Ghostbusters-inspired equipment like Proton Pack Blades, Ecto Goggles and Ghost Traps. Fruit Ninja’s success presents an interesting twist to the trend of games based on licensed IP. Licensed updates may have an advantage in the form of shorter development cycles and lower costs while still providing a desired spike in downloads. 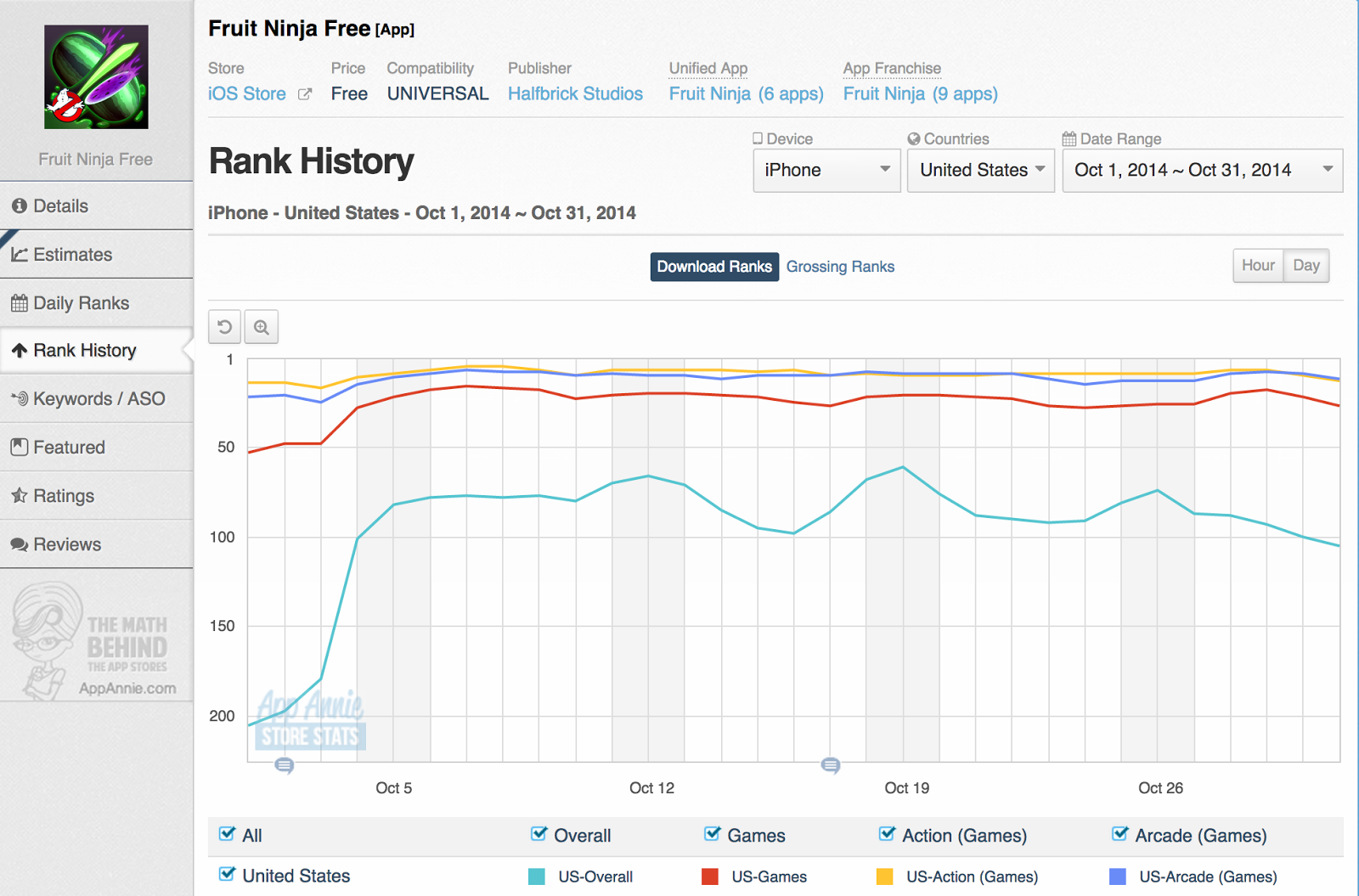 Fruit Ninja climbed up the iOS store rankings in October thanks to two major updates. 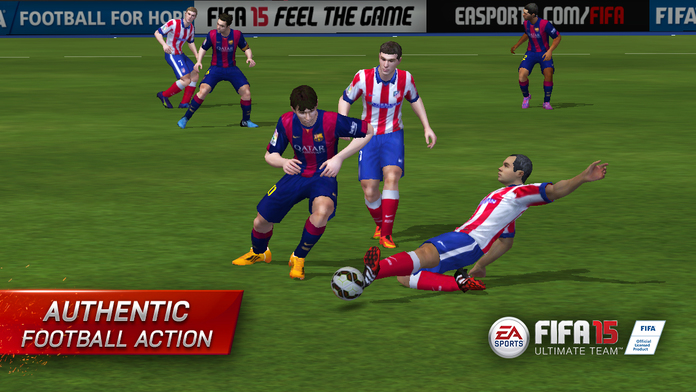 FIFA 15 Ultimate Team received a boost from launching alongside its console variant. 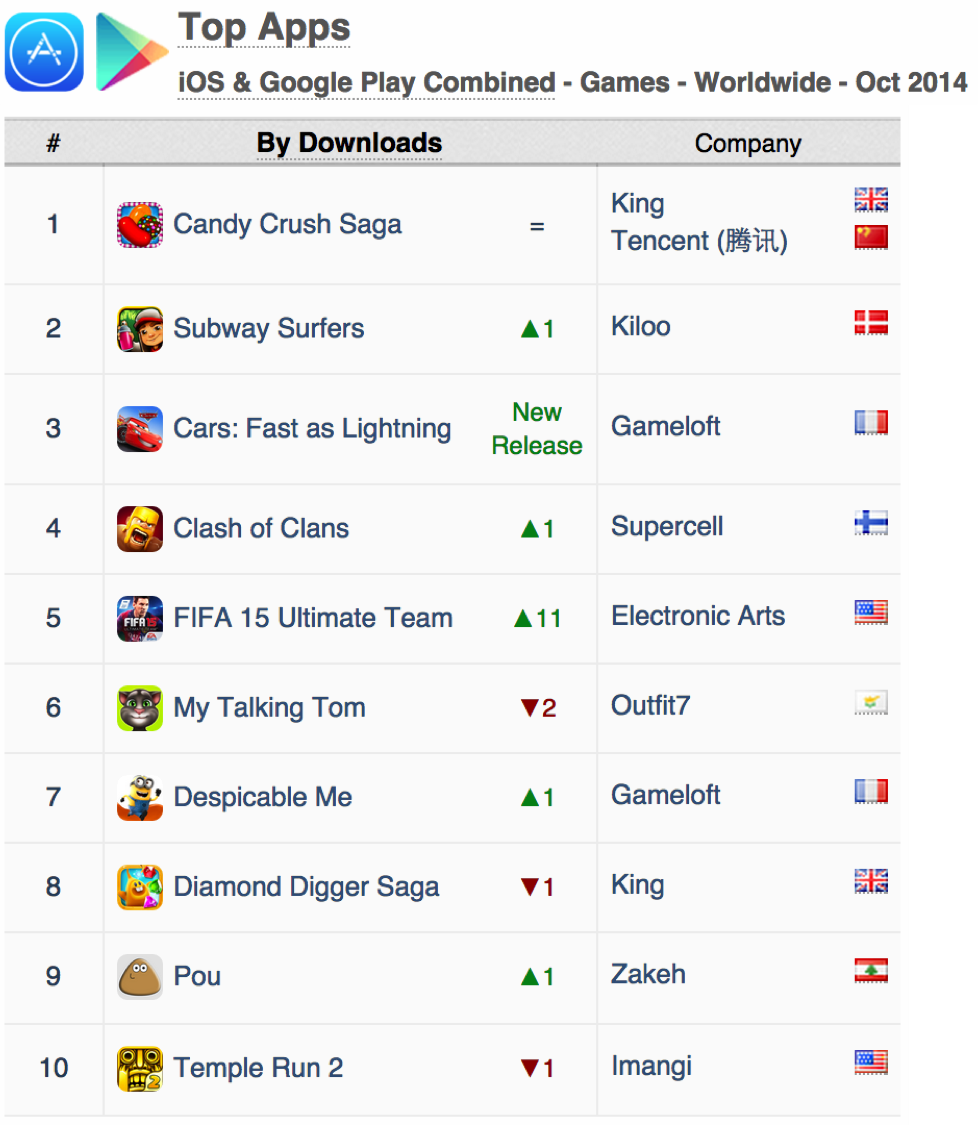 This year’s installment was released simultaneously with the console version but differs in gameplay focus. The mobile game places greater emphasis on team management through new features like Quick Simulation. Since its release in late September, the title has sprinted up download charts on both the iOS App Store and Google Play. Emerging markets like Brazil, Russia and Mexico drove a significant volume of downloads on Google Play. 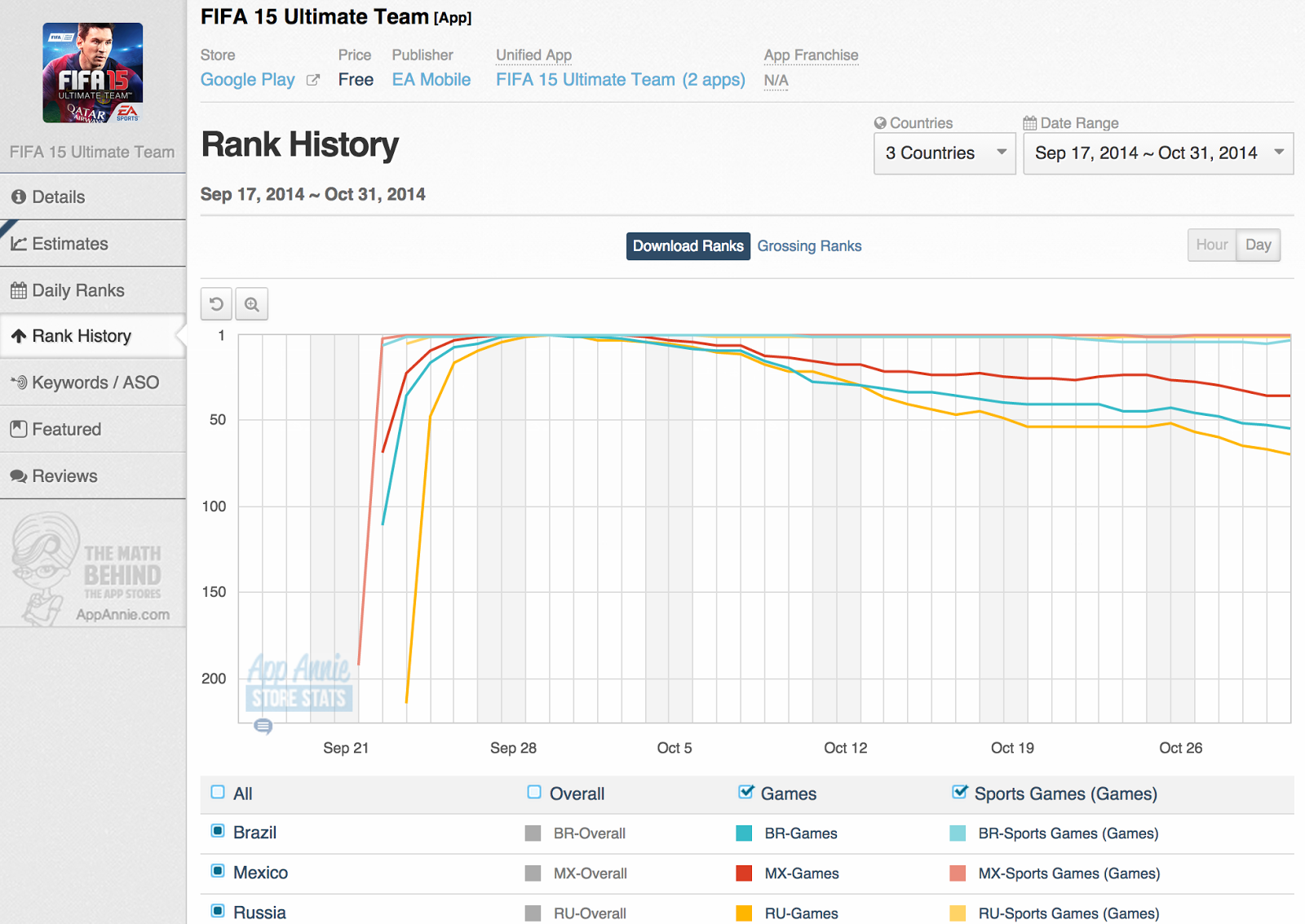 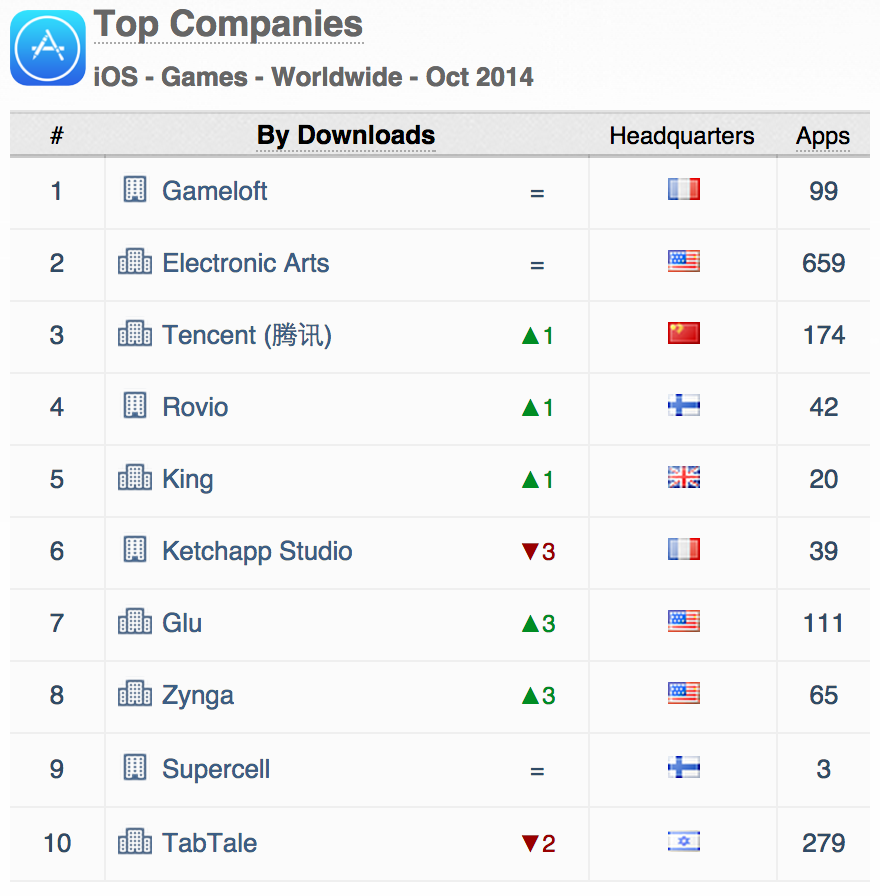 In early October, Zynga refreshed one of its most popular game franchises with the iOS and Google Play launch of New Words With Friends. The redesigned game adds solo play, a long-requested feature, but the biggest change seems to be its emphasis on social elements. Zynga’s goal was to increase engagement and acquire new users by matching users to opponents with similar skill levels. 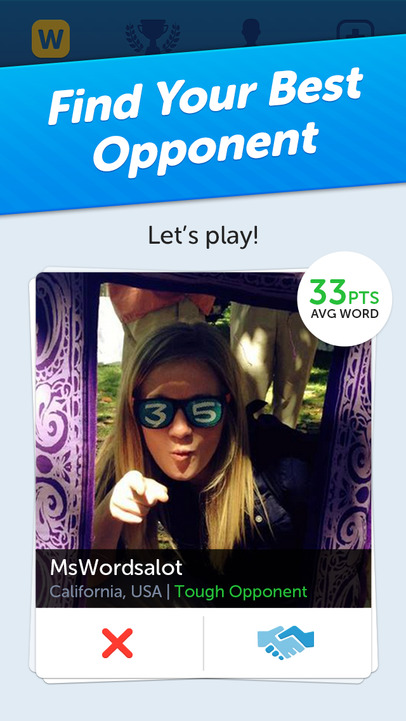 The game also adds a matchmaking feature reminiscent of leading dating apps. Users can swipe through pictures of opponents and also filter them by location or gender. Over the past month, Zynga even published a series of blog posts titled, Words With Friends: “Love Letters”, to highlight this use case. The title was heavily featured on the iOS App Store and became a major hit in the US as it ranked among the top 10 downloads. 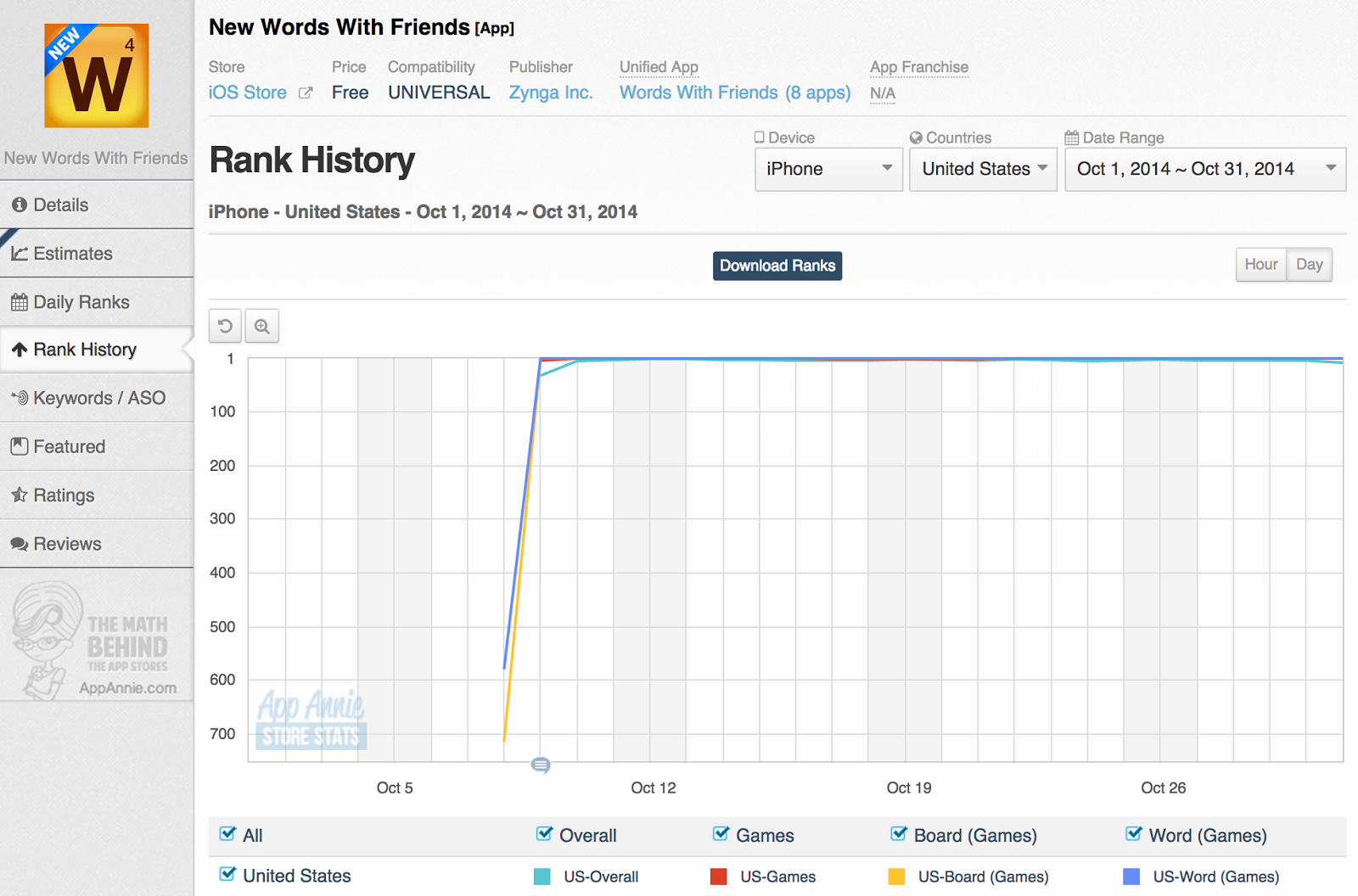 New Words With Friends immediately shot to the top of the iOS download charts in the United States.

If you are interested in finding out more about top apps outside of games, please check out the October 2014 Worldwide Index for Apps. To keep up-to-date with all the changes at the top of the app and publisher charts, check out the complete set of App Annie Index tables.