It’s a New Age for Game of War 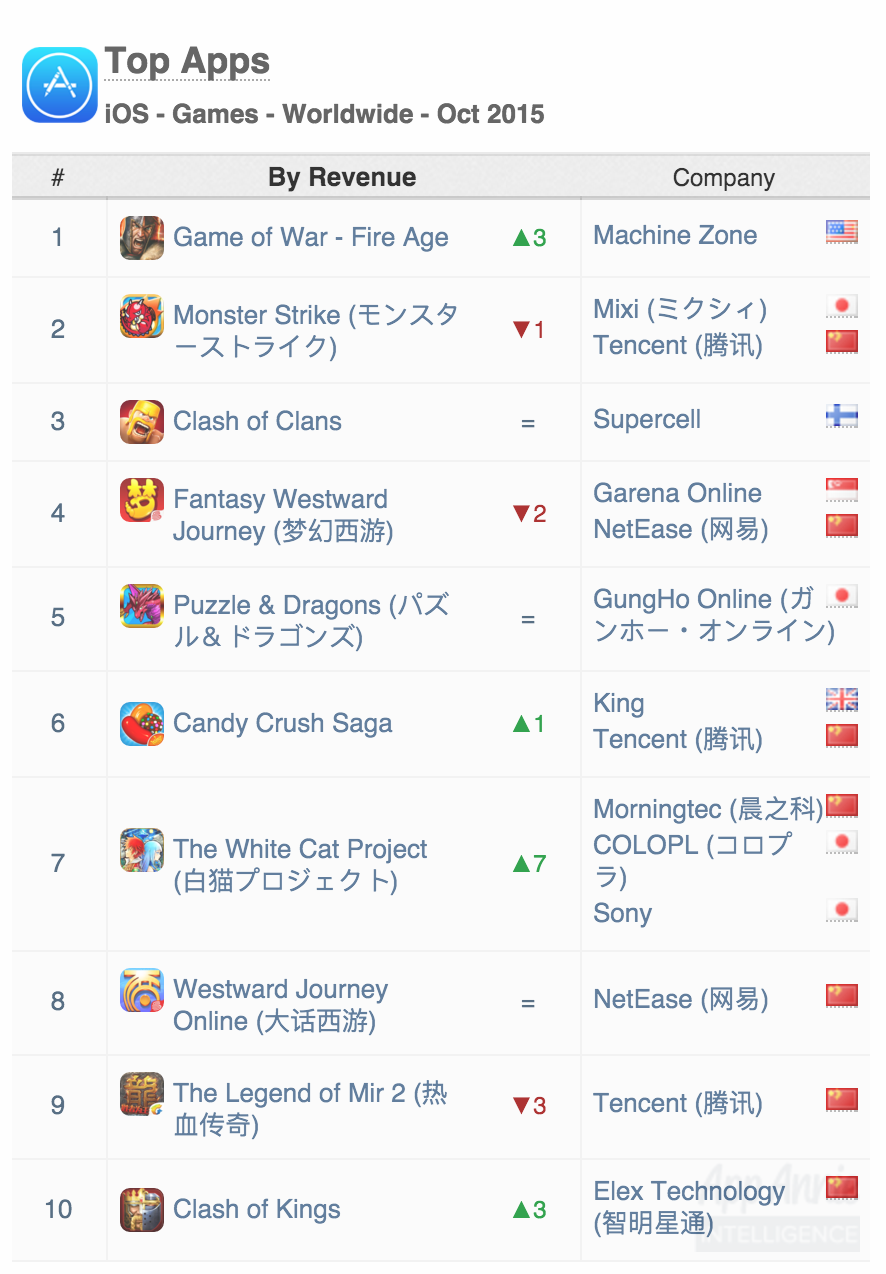 The consistently high-performing Game of War – Fire Age reached #1 for the first time in worldwide iOS revenue in October. The game has seen success in multiple markets, including the United States, United Kingdom and Japan. Its performance in Japan is particularly worth noting, as it is rare to see non-Japanese game publishers rank so highly. Game of War’s recent global-level rise was driven by strong performance in the United States in October. 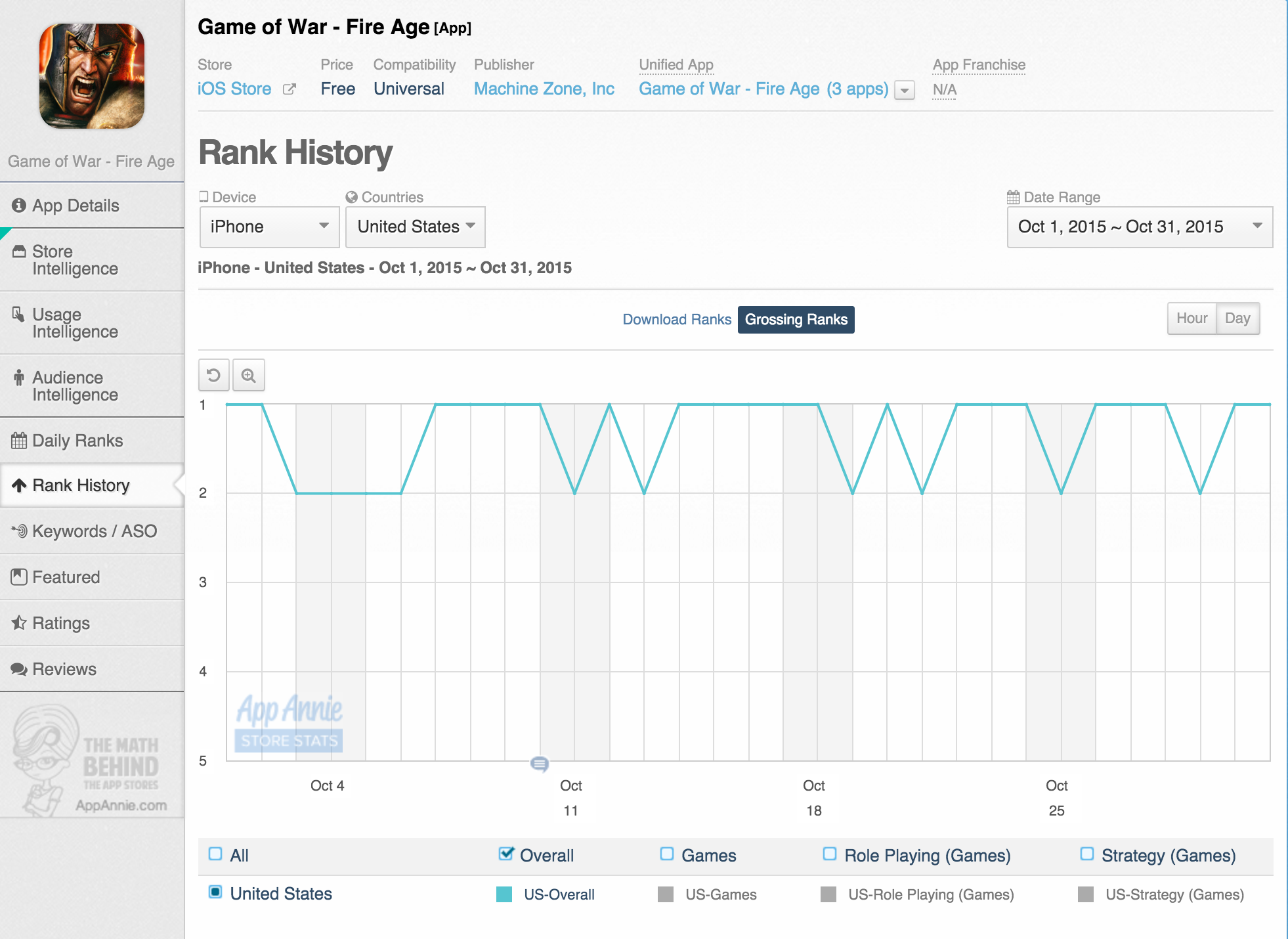 In daily iOS revenue, Game of War - Fire Age ranked #1 or #2 in the United States for the entire month of October.

Publisher Machine Zone designed its game to create an addictive multiplayer  experience, as described in our E3 Gaming Report, complete with messaging and language translation features. Celebrity endorsements — including the recent spokeswoman switch from Kate Upton to Mariah Carey — and high-profile advertising campaigns bolstered awareness of the game. Game of War’s heavy promotion supported its rise up the revenue rankings.

In July, Machine Zone subsidiary Epic War released Mobile Strike, a Game of War-style title featuring similar strategy-based gameplay. As with Game of War, Mobile Strike features a celebrity endorsement, this time swapping out the feminine Upton-Carey combo for a masculine Arnold Schwarzenegger. The game also differs from its Game of War counterpart with a modern military setting. As many of the top-grossing games take place in fantasy settings, we are eager to see how the Game of War monetization strategy translates to the non-fantasy military setting in the months to come. 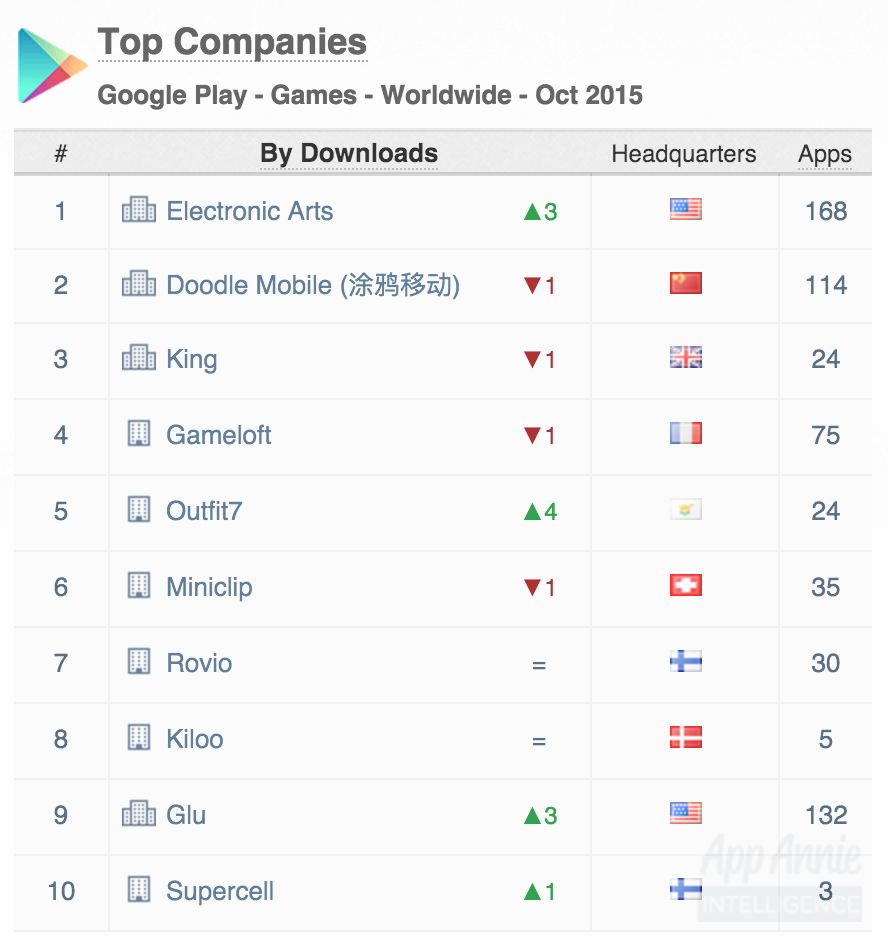 In October, gaming giant Electronic Arts (EA) rose 3 ranks to #1 by Google Play downloads and 1 rank to #1 by iOS downloads, extending its lead over the worldwide iOS and Google Play combined gaming market. This success can largely be attributed to the launch of two new games based on successful intellectual properties (IP): Minions Paradise and Need for Speed No Limits.

As discussed in our July 2015 Games Index, mobile game downloads have ridden the power of established IPs with top-ranking apps like Despicable Me and Angry Birds 2. This continued in October with the introduction of Minions Paradise by EA, which surged to #2 by global Google Play and iOS combined downloads.

Minions Paradise saw widespread appeal, already reaching the #1 daily download rank for games in over 100 countries on iOS and over 60 countries on Google Play. The game hit #1 by Google Play game downloads in the game’s top 4 countries and remained there for almost a week. 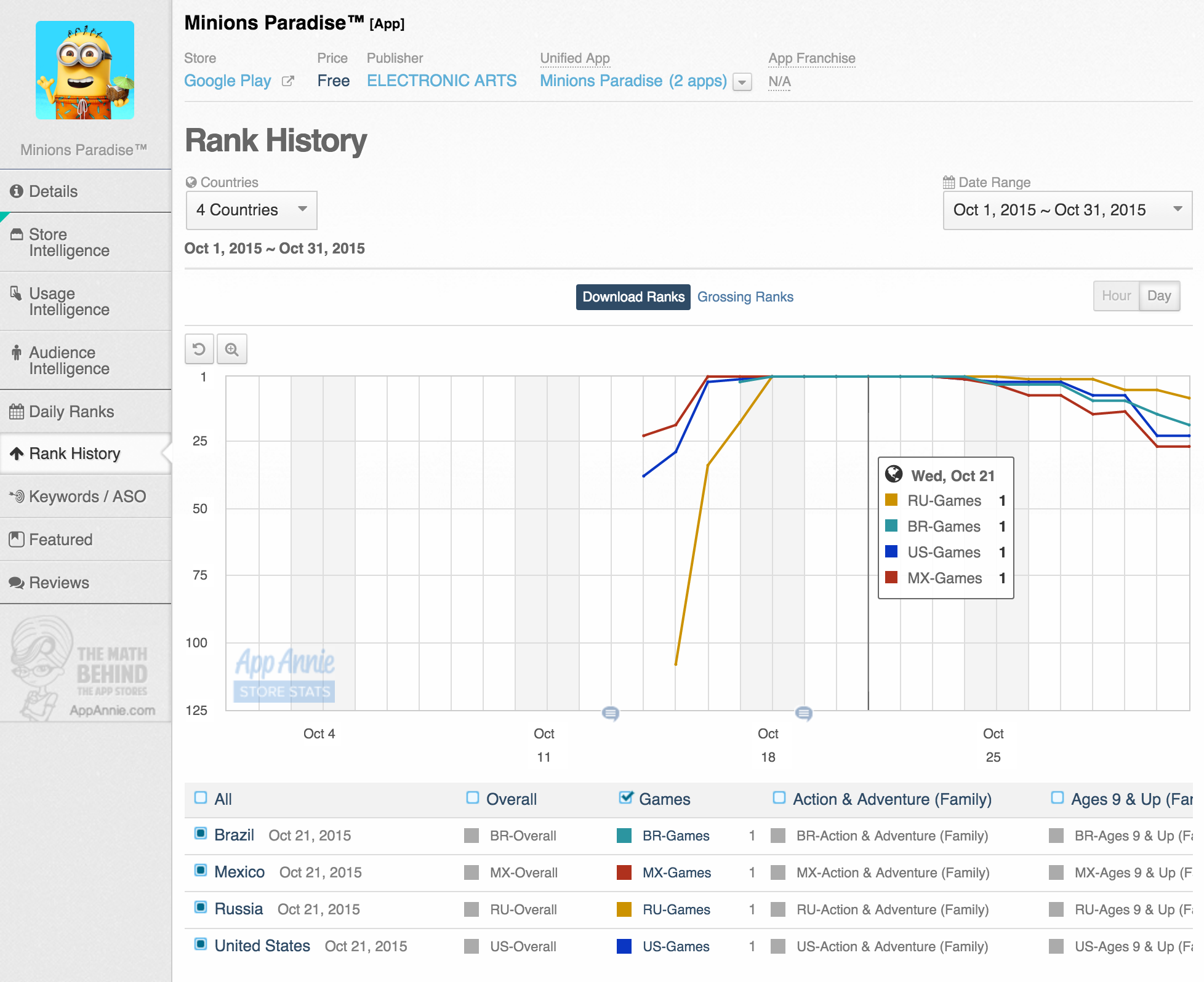 The week after its global launch, Minions Paradise topped the daily download rankings for games in its top four countries on Google Play.

The popularity of Minions Paradise’s YouTube trailer, Facebook page, and Twitter profile published in April and June announcing the game’s launch illustrates the power of franchises to build demand and awareness for a mobile game while creating an omni-channel platform user experience. 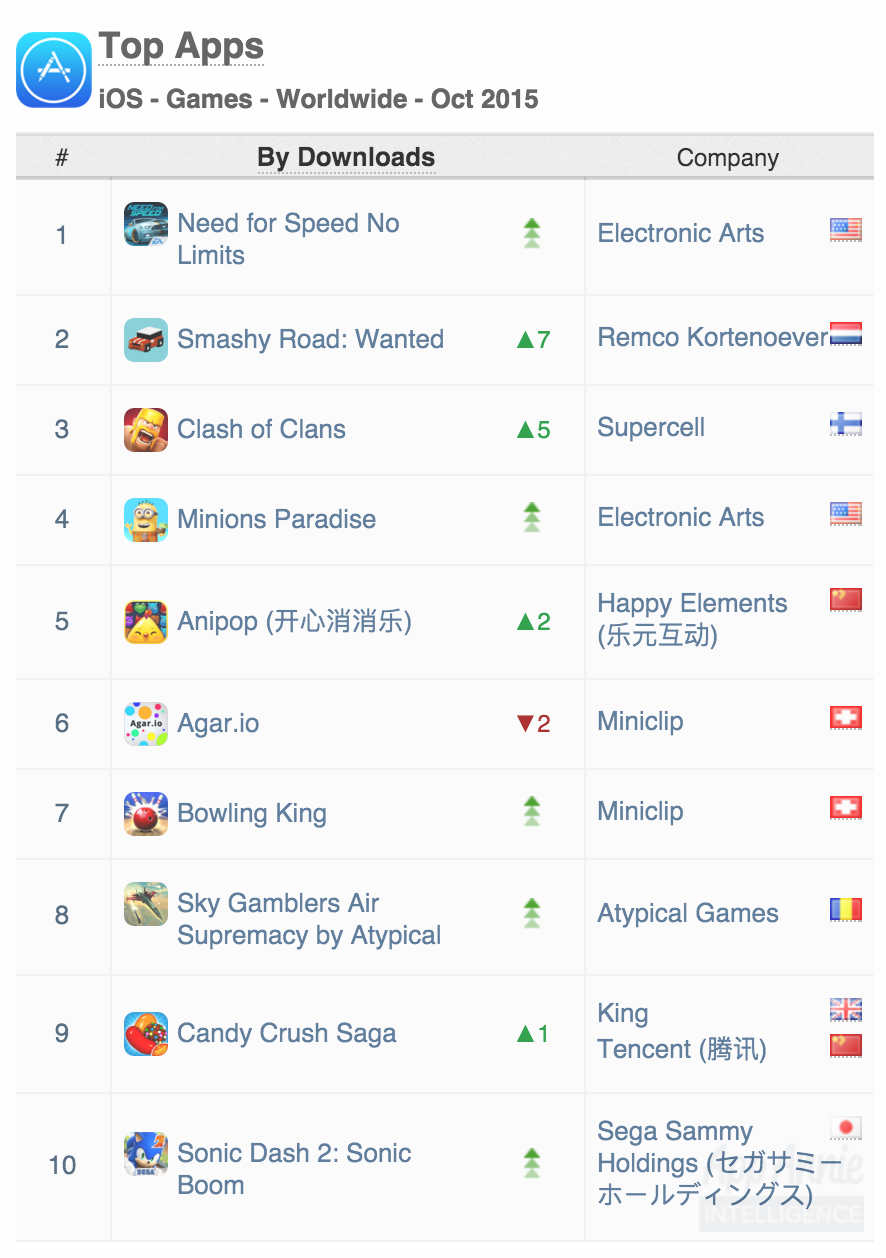 Need for Speed No Limits, another EA title, launched at the end of September and surged to #4 on October’s rankings by worldwide Google Play and iOS combined downloads. The app did particularly well on iOS, taking the #1 rank by downloads in October.

Like Minions Paradise, Need for Speed is a well-supported franchise with a large following; however, the latter’s core audience has traditionally been on console devices. While EA has had success expanding from console to freemium mobile apps in the past, this is their first take at a freemium version of the Need for Speed franchise. Introducing a freemium mobile game and topping the iOS download rankings during the first month of its global launch could indicate a successful expansion from console to new mobile monetization strategies for EA’s Need for Speed.

Smashy Road: Wanted’s popularity is steadily rising on both iOS and Google Play. Its user-centric ad monetization and high-speed action combined with its retro design boosted the game into the top 10 for active users of both iOS and Android. 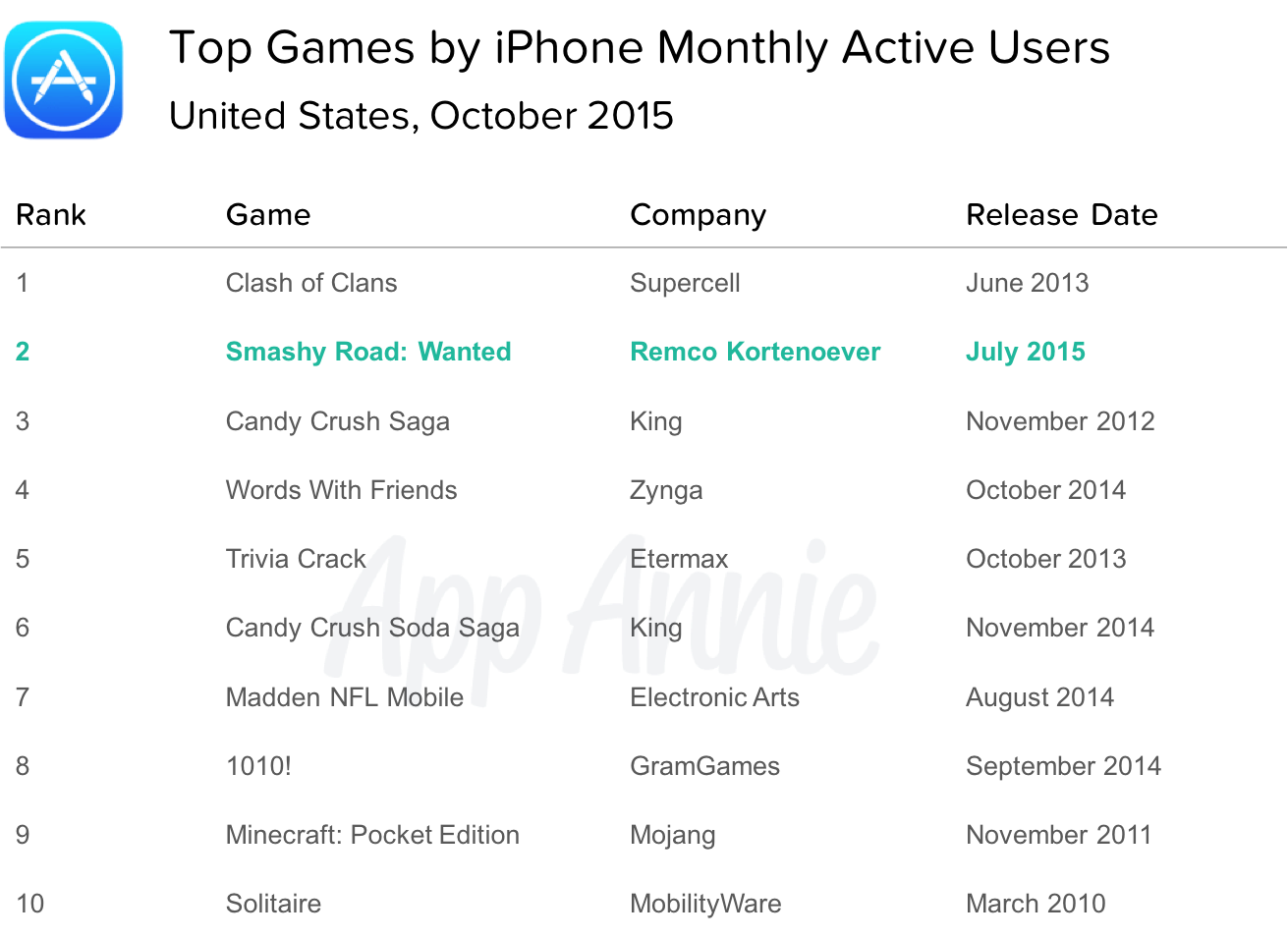 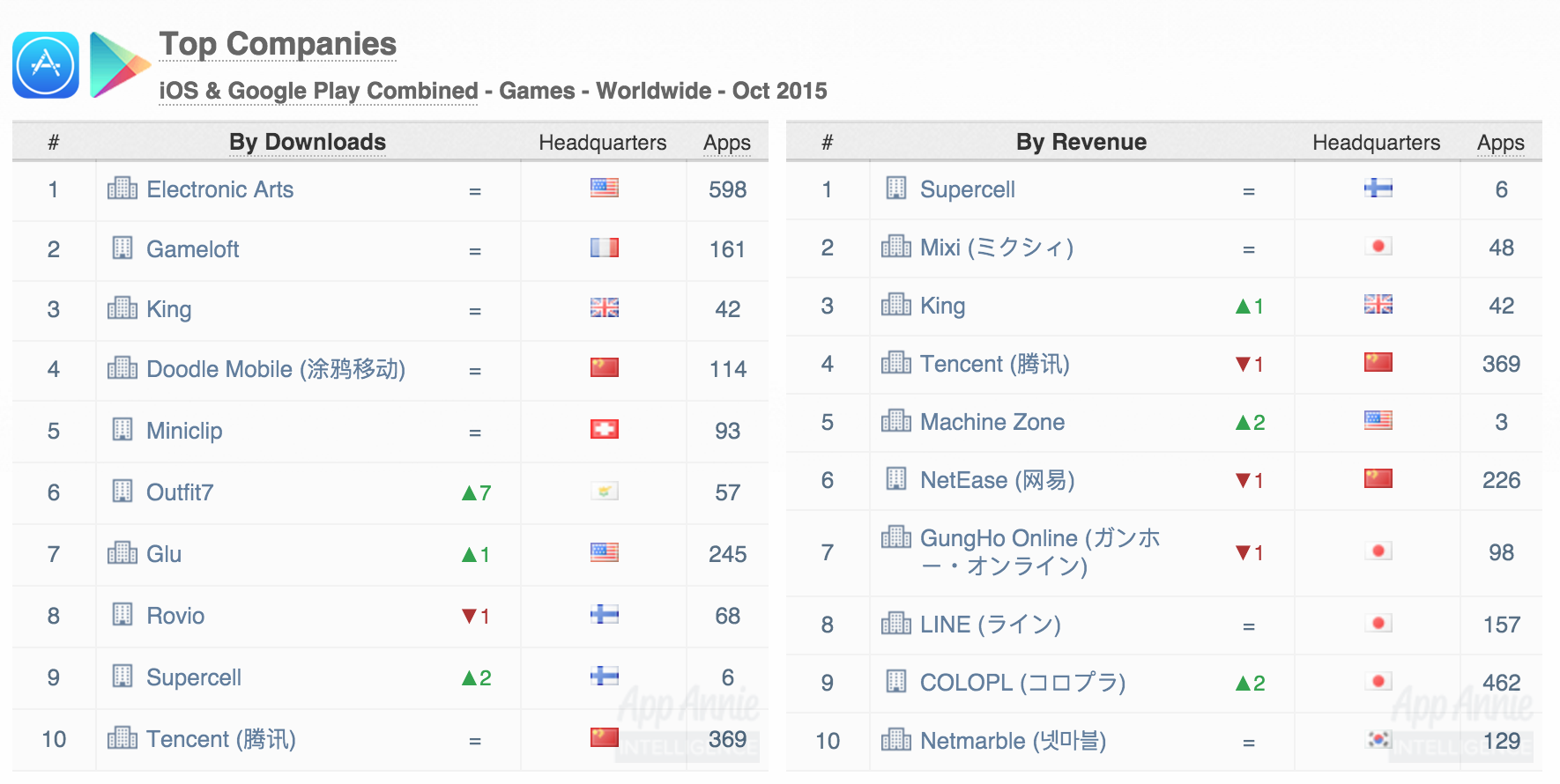 For the complete list of October’s top games and game publishers around the world, click the chart above.