No Longer Niche: How Gaming Is Revolutionizing Business

In just a few years, mobile gaming has grown dramatically. This rise has expanded beyond the gaming industry and now influences the entire mobile experience.

In case you missed it, gaming now accounts for 74% of consumer spend in app stores and the sector is moving at breakneck speed. Revenue from mobile games is larger than the global box office industry. It’s become a growing, lucrative industry — one that has caught the attention of Google. The tech giant announced its Stadia cloud gaming service at the annual Games Developer Conference (GDC), enabling users to instantly stream games to PCs, tablets, TVs and smartphone devices.

2018 was an especially significant year for mobile gaming. As App Annie analysts noted last December, “2018 was the year where it really became obvious that mobile was a sophisticated gaming platform in its own right, offering experiences (e.g., Fortnite and PUBG) that can match consoles.”

“While some businesses in the past may have dismissed gaming as a niche industry or one that doesn’t impact their sector, it will have a growing impact on all that operate on mobile in the years ahead.”

The stats from App Annie’s State of Mobile 2019 show the year ahead will be even bigger: Mobile gaming will reach 60% market share in 2019 among PC/Mac, handheld and console gaming. Consumer spend in games grew 105% in China and 45% in the US since 2016. The increases in gaming have been widespread, including emerging markets — consumer spend in games in India and Brazil grew 90% and 60%, respectively, for example. It’s important to note, that transacting through the app store is just one monetization stream for mobile games. Many games — particularly in emerging markets — monetize through in-app advertising and therefore, shift the cost from the gamer to advertisers. 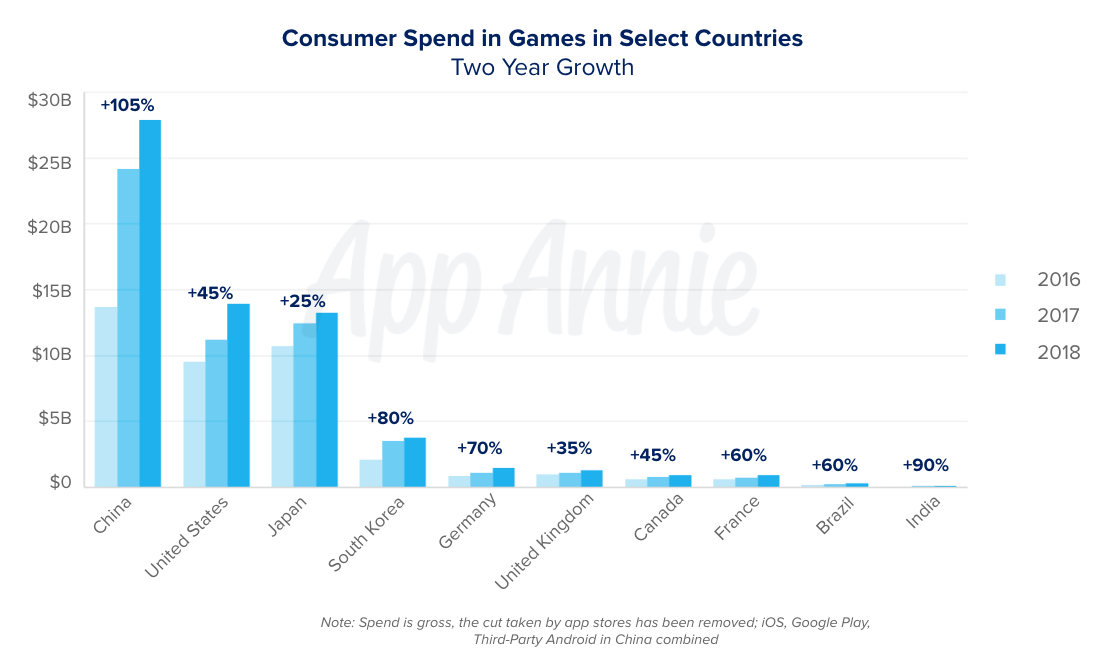 While the gaming industry has moved at incredible speed, the vast majority of the most used games among analyzed markets were incumbents that launched prior to 2018, with PUBG and Helix Jump being the few notable exceptions. In fact, Candy Crush Saga and Pokémon GO were in the top 3 by average monthly active users (MAU) in 2018 in the US, France, Canada, Germany and the UK. As indicated by the popularity of games like Helix Jump and PUBG, in 2018 we saw expansion of both ends of the gaming spectrum — from hyper-casual to hardcare — turning even those who don’t traditionally identify as ‘gamers’ into ‘gamers’.

It is clear that gaming is growing rapidly on mobile and this fact has bold implications for the wider business industry. While some businesses in the past may have dismissed gaming as a niche industry or one that doesn’t impact their sector, it will have a growing impact on all that operate on mobile in the years ahead.

How so? Phone manufacturers like Samsung, Apple and Google have adapted and made devices capable of handling mobile gaming by increasing processors, improving speakers and enhancing resolution. This change means app developers can be bolder in the design of their apps, knowing phones have the horsepower to handle it.

“Businesses in every enterprise should evaluate how they can increase the stickiness of their mobile experience through gamification.”

Gamification isn’t exclusive to mobile gaming; gamification techniques can be leveraged by virtually every industry. In the health and fitness sector, Fitbit, Garmin, and Strava have seen strong success by gamifying exercise with their connected devices and mobile apps. It’s no coincidence that loyalty programs from Starbucks to Sephora have increased in recent years, alongside the rise of gaming. It’s also no surprise that one of the most popular tech companies around — Slack — originally started as a video game. Domino’s took the unusual step of rewarding consumers with “Free Pizza Points” by taking a picture of any pizza — homemade, frozen or from another restaurant — on their app. This is a brilliant move, as Domino’s recognizes that people are going to eat other kinds of pizzas, but uses that as an opportunity to bring them back to their Domino’s app.

As consumers play more games, businesses should leverage gamification to help attract new users. Businesses in every enterprise should evaluate how they can increase the stickiness of their mobile experience through gamification. If you put on an annual conference, for example, you might develop a scavenger hunt on your event app to drive attendance to events and traffic to certain key areas. For those looking to bolster participation in continuing education and training, businesses can create incentives like gift cards and badges for completing certain programs.

To learn more about how mobile gaming or gamification is impacting users, many companies turn to App Annie. Glu, a leading mobile gaming publisher, uses App Annie to better understand potential market opportunities and consumer demand. For example, they use App Annie Intelligence to run competitive analysis, see what games and apps are being downloaded in certain countries, and evaluate whether there is a consumer appetite for their offerings. The tastes of consumers are constantly evolving, and Glu relies on App Annie across its marketing, product and business development teams to understand what the latest trends are, and how to react to them in real-time. Numerous other companies turn to App Annie to see how gamification of their loyalty programs have impacted consumers across target demographic groups.

In the future, the expansion of 5G, the rise of eSports and longer battery life will all make for an improved gaming experience, allowing for faster connection, better resolution and better battery life for longer gameplay. But even for the companies not in the industry, there are numerous learnings from gaming that can help create a winning mobile experience in 2019 and beyond.

For more on the state of mobile gaming in 2019, download our latest report: