Piano Tiles 2 (Don’t Tap the White Tile 2 at launch), the sequel to 2014’s well-received mobile title Don’t Tap the White Tile, has seen its popularity skyrocket since the music game was initially released on iOS in August 2015. As of February 2016, the game has topped download rankings for both iOS and Google Play in major markets including the United States, the United Kingdom, Japan and more. The game was later awarded Best Game of 2015 by Google Play in 13 countries, reaching new heights in its global achievements.

Cheetah Mobile, the Chinese developer behind the game, built upon previous popular titles in the genre like Magic Piano by Smule. We’ll explore how Piano Tiles 2 claimed the top download spot in more than 100 countries in late 2015, and what this phenomenon means for other app publishers.

Following its August launch on iOS, downloads for Piano Tiles 2 steadily picked up in September, where it climbed to the #5 rank in worldwide iOS and Google Play combined downloads.

The game’s simple and intuitive gameplay — tapping tiles is the only action — meant the game could reach a wide range of users. Cheetah Mobile looked to a variety of different channels to promote Piano Tiles 2, including using its own ad platform and  its popular utility app CM Clean Master.

In its effort to attract a more global user base, the publisher collaborated with Internet personality PewDiePie. The influencer promoted the game twice through his YouTube channel, first in September 2015 and a second time in December 2015. As of February 2016, both YouTube videos have been watched a combined seven million times.

Cheetah Mobile collaborated with PewDiePie, who has the highest number of total YouTube subscribers for a single channel (42 million), to promote Piano Tiles 2.

Additionally, Piano Tiles 2 succeeded in staying within the top 10 game download ranks on both iOS and Google Play in the United States, Japan and South Korea from December 18th, 2015 to January 19th, 2016. 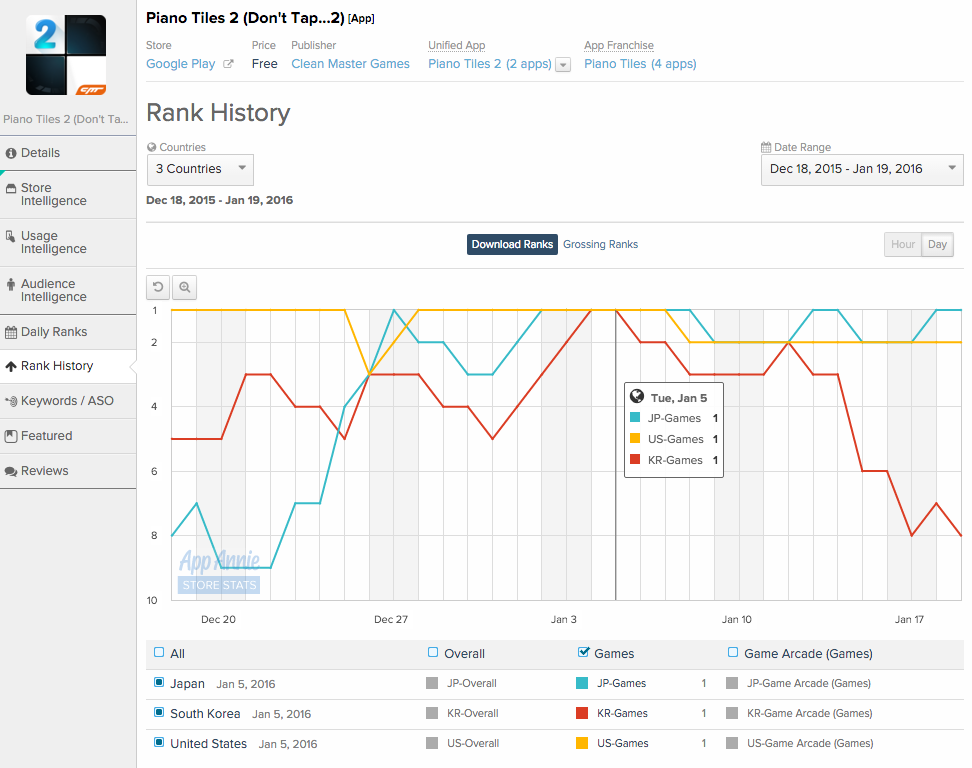 By December 2015, Piano Tiles 2 had steadily climbed to the top rank on the Google Play Games category in the United States, South Korea and Japan

The Importance of Analyzing User Behavior

As a new entrant to the extremely competitive world of mobile games, Cheetah Mobile has updated Piano Tiles 2 on an almost weekly basis. This has kept the game up with market trends.

The developers analyzed usage data from key markets across the globe to answer essential questions such as different gaming habits and content preferences in different countries. The results were then reflected in each new app update. This is a core app store optimization (ASO) tactic to build a globally discoverable and relevant brand. 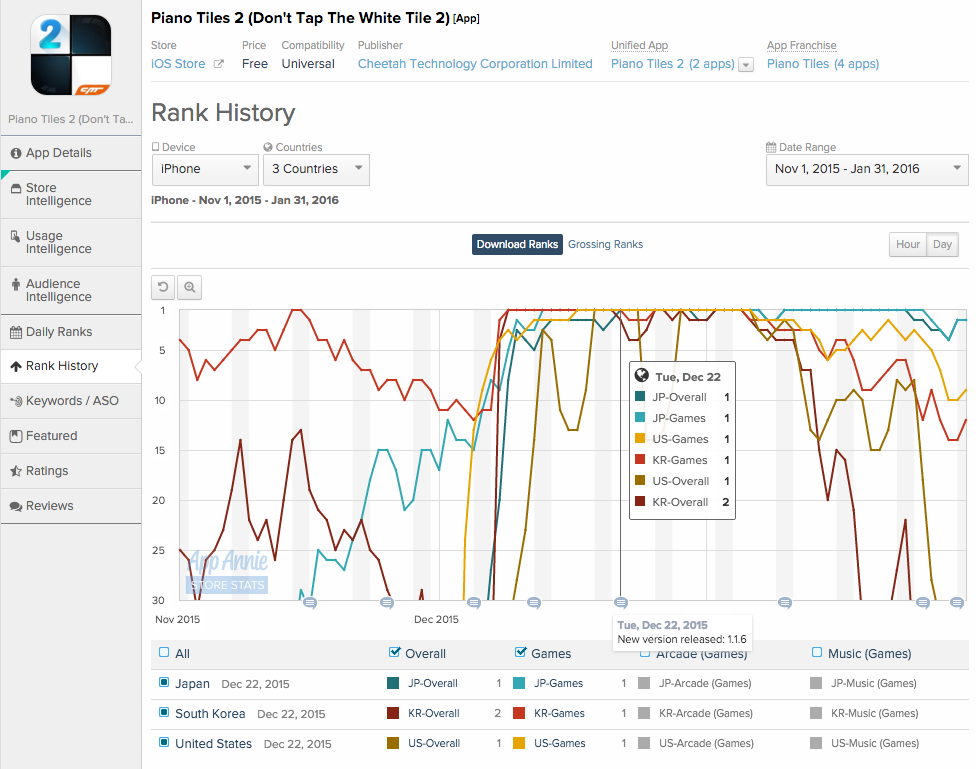 In December, the game saw a dramatic increase in US iOS and Google Play downloads following the release of a holiday-themed app update.