Mobile Minute: The Multiplier Effect of Stranger Things for Netflix

How Stranger Things is set to yield wider mobile engagement and stronger brand affinity for the video streaming giant.

On July 4, 2019, Netlfix premieres season 3 of its hit original series Stranger Things — strategically timed on a public holiday in the US. Given the convenience of smartphones, American viewers can fill gaps between barbecues and fireworks this Fourth of July with a full season’s worth of brand new binge-able content.

Last season’s premiere accelerated a sizeable spike for daily active users (DAU) in Netflix’s mobile apps, and we expect consumer behavior to be similar during season 3.

Beyond increased engagement, the series has fostered considerable positive affinity from mobile users. Following the release of season 2 on October 27, 2017, Netflix saw a surge in positive app store reviews citing “Stranger Things”. This led to a 20% lift in consumer sentiment globally for app reviews citing “Stranger Things” (4.7 / 5 stars) compared to overall app reviews of its iOS and Google Play apps (4.0 / 5 stars). The lift was starkest on iOS at 60%. 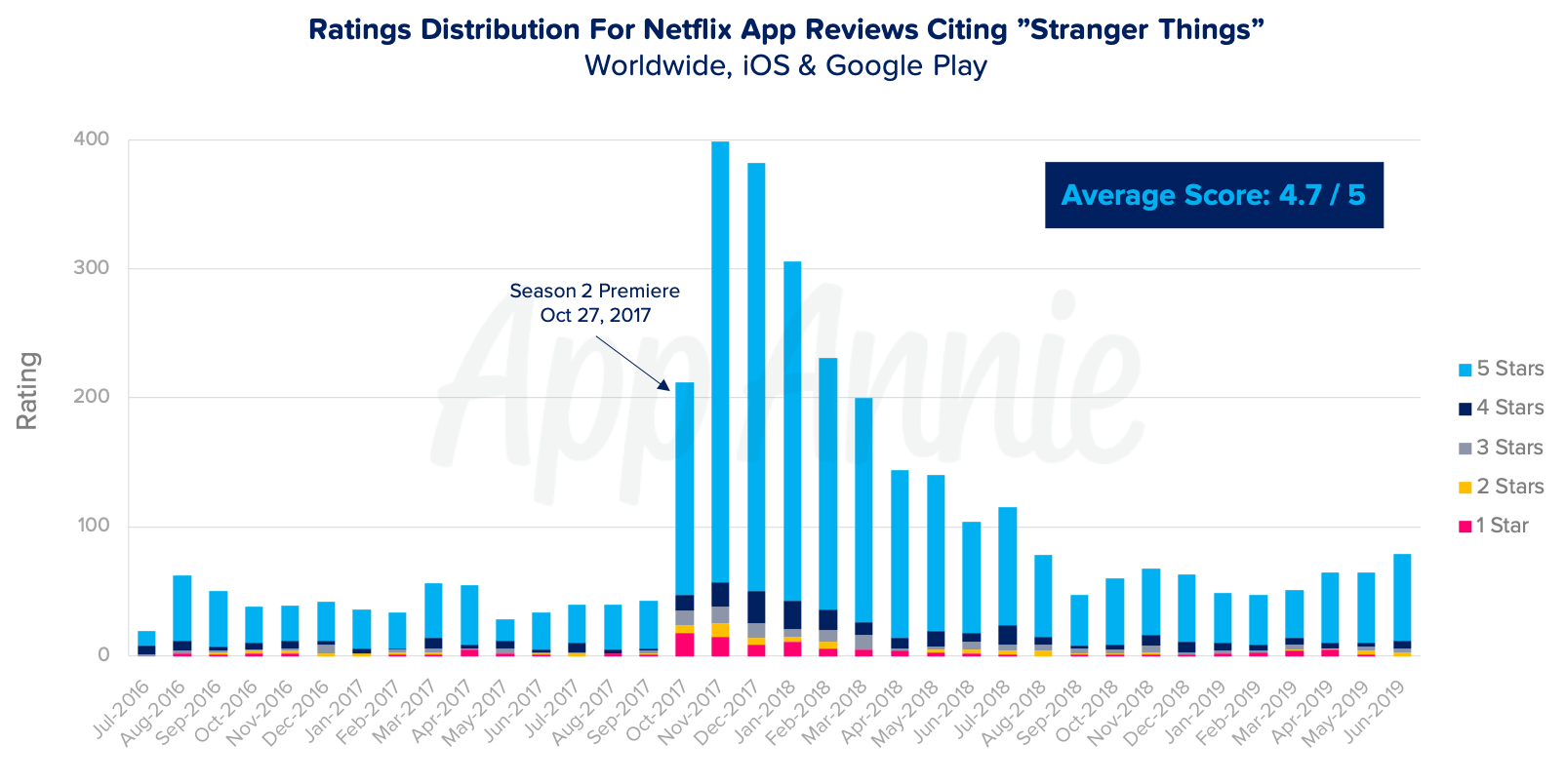 With Game of Thrones on the HBO NOW and HBO GO apps, we saw that exclusive content is a powerful draw card for engaging and monetizing mobile users. Netflix’s Stranger Things illustrates exclusive content can also lead to substantial gains in customer satisfaction for the company.

Given heightened interest around the series, it's no surprise that Netflix is aiming to extend this success by leveraging this audience in new markets including the recently announced Stranger Things AR mobile game expected in 2020. The popularity of the series has also spawned partnerships such as Burger King’s collaboration with an “upside down Whopper” at 11 restaurants — a nod to the show’s character Eleven.

In 2019, we expect 10 minutes of every hour spent consuming media — across TV and internet — will come from viewers streaming video on mobile. Mobile is increasingly becoming the primary battlefield for streaming services. Spikes in engagement and consumer sentiment surrounding season 2 of Stranger Things highlights the series’ loyal following, which will be key as Netflix tries to leverage influence in the competitive video streaming market. With Disney+ set to launch in November 2019 at a competitive $6.99 per month, exclusive content, loyal fandom and brand affinity may be the recipe to compete in the crowded streaming space.

For more insights on the state of mobile in video streaming, download our State of Mobile 2019: Video Streaming: