No matter where your users are or who they are, apps drive engagement

One of the remarkable things about mobile apps is that, when it comes to adoption, they function as equalizers. Once people have smartphones and access to apps, they use them, and many differentiating factors that typically exist in other contexts melt away.

We recently published a report called Why Your Mobile Strategy Needs an App that explores to what degree apps generate usage patterns that are consistent across very different markets — patterns that marketers can leverage efficiently to expand their reach on mobile. Here are a few top-level things to keep in mind when it comes to just how uniquely apps engage consumers.

No matter what the country, more time is spent in apps than on the mobile web

You might think that there would be fairly significant variation among countries when it comes to how they spend their time on their smartphones. Perhaps there are cultural, technological or infrastructure factors that would influence time spent per country. However, it turns out that’s not the case at all: there’s little variation among vastly different markets in terms of how much time is spent in apps versus on the mobile web. The graphic below demonstrates this clearly.

When you compare the share of app usage in Indonesia, an emerging market, with that in the US, the figure is the same: 87%. The takeaway is that no matter what the regional market, if you want to engage users, you need to meet them where they already are: in apps.

Older users prefer apps just as much as younger users

While there might be something to younger users having grown up with mobile as a natural environment, the data shows that when you compare how much relative time users of different ages spend in apps versus on the mobile web, there isn’t a significant difference. Worldwide, users in the 13-24 age range spend 89% of their time on smartphones in apps, while users who are in the 45+ age bracket spend slightly less, at 85%. Look at the figures across other mature markets and the figures are very similar, with 13-24 year-old users using apps roughly 90% of the time they’re on their phones, and older users using apps marginally less. 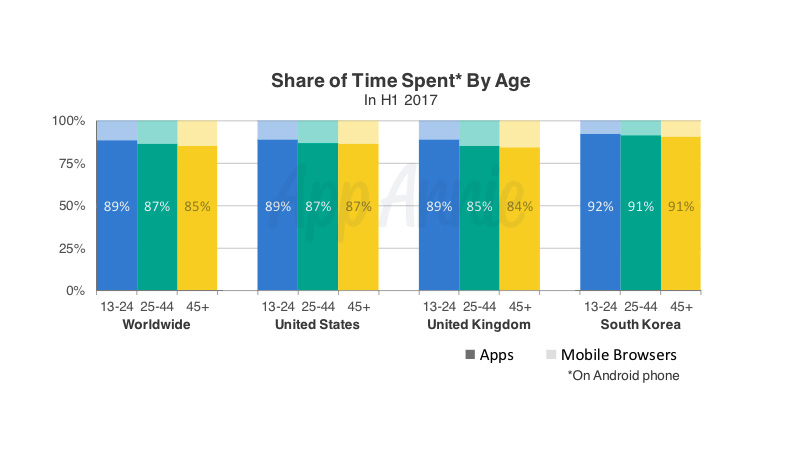 It doesn’t matter if your target user is 15 or 50 — if they’re on mobile and you want to reach and engage them, your best bet way to do so is via apps.

The iOS App Store first opened nine years ago, and over the course of the time since (and including the evolution of Android stores), we’ve seen industry after industry “figure it out” when it comes to how to leverage apps to engage consumers. Early on, gaming apps and those produced by the likes of Pandora dominated, but over time, industries that we weren’t sure could make the leap to mobile did. Remember when it was inconceivable that you could deposit a check, order a pizza, or book a flight via your phone? Innovators in banking, food, and travel worked away at delivering services via mobile apps because they knew that it didn’t matter what the industry was — it just mattered that they could deliver convenience and a great user experience to their customers via mobile. It’s no accident that in retail, for example, app users convert better than mobile-web or desktop users, or if you look at the data for a specific company, that nearly 50% of UK sales for Domino’s comes through its app.

The data clearly demonstrates that smartphone users spend the majority of their time in apps. While for many businesses it’s still important to maintain a great mobile web experience given that there’s no barrier to discovery with mobile web, it’s critical to have an robust app to not just meet users where they are, but meet their expectations in terms of how e-commerce is done today. Done right, apps provide a point of access to your business that can work across the board with smartphone users.

To download the full report, Why Your Mobile Strategy Needs an App, fill out the form below. Customers who log-in will be able to access the report immediately and won’t see any form.

This is Part 2 in a series exploring the differences between apps and the mobile web. Read Part 1.