For many companies, having an app is no longer optional. Worldwide, time spent in apps has doubled over the past two years and, on average, we’re each using apps for 2 hours every day. In 2021, users will spend more than 3 trillion hours in apps in total.

This acceleration in app usage gives companies an unprecedented opportunity to engage with their customers, but for many, apps are still a relatively new addition to their toolkits. As with any new approach, making the most of apps requires new skills, new technology and an understanding of a new set of performance metrics. As some companies scramble to catch up, those who are have a head start in the app economy have a significant competitive advantage.

App Annie is committed to supporting companies as they embrace and adapt to the app economy, and with that in mind, we wanted to de-mystify two key app performance metrics, install penetration and open rate. We will explain what these metrics are, how they can be interpreted (individually and together) and, most importantly, what they can tell you about your competitors.

What is it?
Install penetration for an app is the percentage of actively used smartphone or tablet devices (a strong proxy for the number of people using apps), within a chosen market, that had that app installed during a selected time period.

For example, if there were 100 active devices in a market in October 2017, and 5 of them had a particular app installed, that app has an install penetration of 5%, in that market, in October 2017.

What can it tell you, and what influences it?
Ultimately install penetration indicates the relative success of an app’s user acquisition strategies.

Install Penetration example
A highly ranked casual game in Japan is experiencing a gradually declining install penetration. This is expected for most games — even with continued re-engagement, and new features being added, users’ attention will eventually drift elsewhere. You can use data about declining install penetration (yours or your competitors') to your advantage. For example, by observing similar trends in competitors’ apps, publishers can time their own releases and UA efforts to best capture the wavering user base. 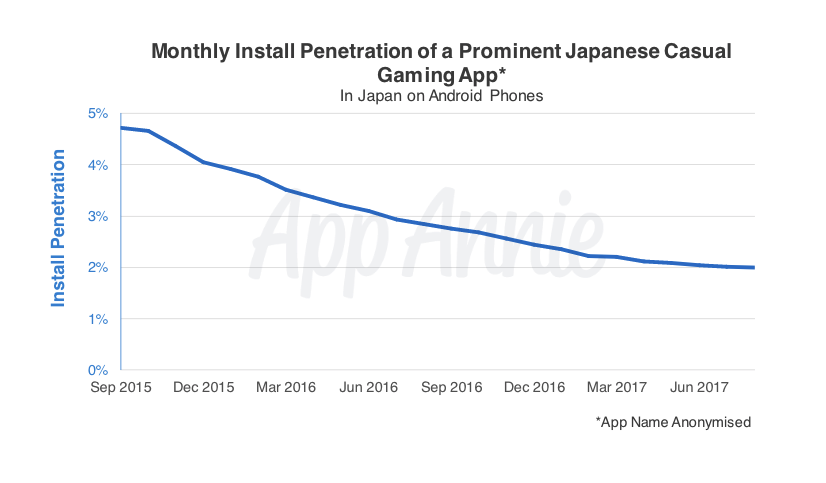 What is it?
Open rate is the percentage of devices, that have an app installed, that open that app at least once during a selected time period.

What can it tell you, and what influences it?
Open rate is a measure of how engaged an app’s users are. The ideal open rate will vary by app, but generally a growing open rate indicates an increasingly engaged user base that is finding more reasons to return to the app. It can also suggest periods of high and low traffic — essential for both tracking marketing ROI, and preparing systems for higher user numbers.

Open Rate example
We’ve noted that the app from a leading UK high street retailer is experiencing a consistent spike in users on Wednesdays and Thursdays. The retailer doesn’t run any promotional activities specific to these days, so it appears to be organic behavior from their customers. The company in question, and its competitors, could take advantage of this midweek spike in customer interest. It may be the ideal time to launch key products and promotions, maximizing the company’s exposure and revenues. 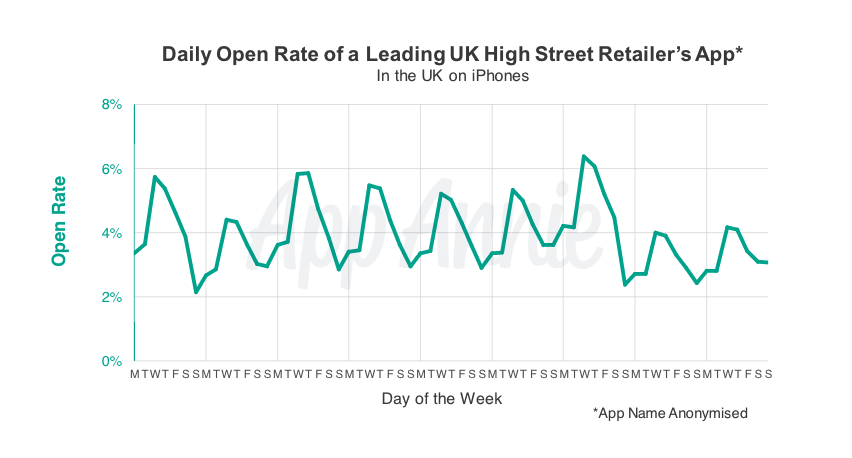 In isolation, install penetration and open rate each provide a lot of information to companies. However, as you’ll see in the following examples, analyzing them together, and in conjunction with other metrics, can provide a fuller picture of both app performance and customer behavior.

The business question
A US retailer (‘Company A’) looking to increase its app’s user engagement, has noticed that one of its competitors, a prominent US brick and mortar retailer (‘Company B’), saw its app’s monthly active user base more than double since late 2015. They want to know what drove this, and if they can replicate it.

Analysis
Digging deeper, they also observed that the average monthly open rate for Company B’s app increased from 35% to just over 80% among iPhone users — indicating that the app not only has more users and but that they’re also more engaged.

By investigating the app’s update history, they saw that this growth occurred during a period of consistent and significant feature updates, all aimed at improving the user experience — a strategy that appears to have been successful.

However, install penetration reveals more of the story. Over the same time period, the app saw its average install penetration fall from 10% to 8%, meaning that the app has been acquiring new users more slowly than the overall growth in smartphone users. This could indicate a lapse in UA efforts but, considering the jump in open rate, it’s perhaps more likely that it’s been targeting fewer, but more relevant and engaged users.

Conclusions
Company B’s app’s strategy appears to have been very successful and is worth emulating. Company A can now begin further investigations into what features their competitor introduced, and who they have been targeting, to inform their own UA efforts.

The business question
A game developer, ("Company A"), looking to prolong the life of its most popular game, wants to find an effective strategy to create a sustained increase in overall user numbers.

Before launching its own initiative, it wishes to observe the impact of strategies implemented by similar apps. This will better inform its own initiatives, reducing the risk of wasting money, time and resources on an unsuitable approach.

Analysis
Company A notices that one of its competitors, a popular competitive online game (“Company B”), has seen a slow decline in install penetration — a 20% drop over the past few years. It has acquiring new users more slowly than the overall growth in the market.

This is typical of mobile games, and publishers often add new features and run promotional events to boost UA, re-engage their existing user base and prolong the life of their games. Company B’s app did exactly this. In December 2016, it added a significant number of new game features and items, as well as launched a new season of competitive play.

However, would emulating this strategy lead to the sustained growth in user numbers that company A is looking for? Using install penetration and open rate in conjunction with app store revenue, it can begin to understand the ROI of this release.

In this case, Company B saw a sustained increase in open rate, and a significant spike in revenue, but no corresponding jump in install penetration. It seems the release led to temporary re-engagement and monetization of existing users, but did not trigger enough new installs to significantly expand the game’s user base. 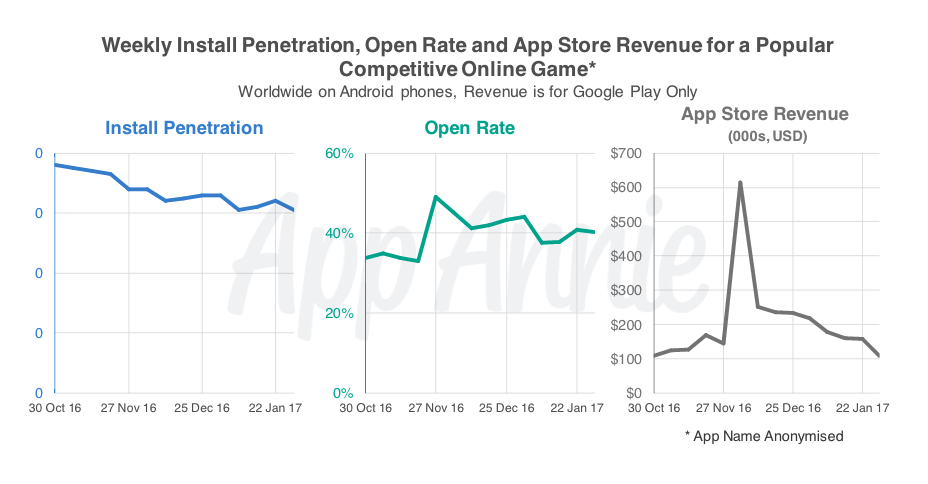 Conclusions / Next steps
This approach did not have the impact that Company A is looking for. It boosted engagement, but this was not sustained — more investigations are clearly needed. As a next step, they could refine the scope of their analysis (to games that have already experienced long term increases in engagement), increasing the odds of them finding a suitable, effective strategy. There will likely be some A/B testing and trial and error involved, but if you’re monitoring your install penetration and open rate closely, you’ll have data-backed indications that you truly are headed in the right direction.

We hope we’ve helped you better understand these two essential metrics for assessing performance in the app economy. However, this is just the start. Check out our posts on why apps have an advantage over mobile websites , and how to successfully market your app in the ever more competitive app store. If you’re ready to dive into even more app data, sign-up for App Annie for free right now.