Released in late March on iOS and Google Play, slither.io rapidly climbed the downloads charts in just over one month. 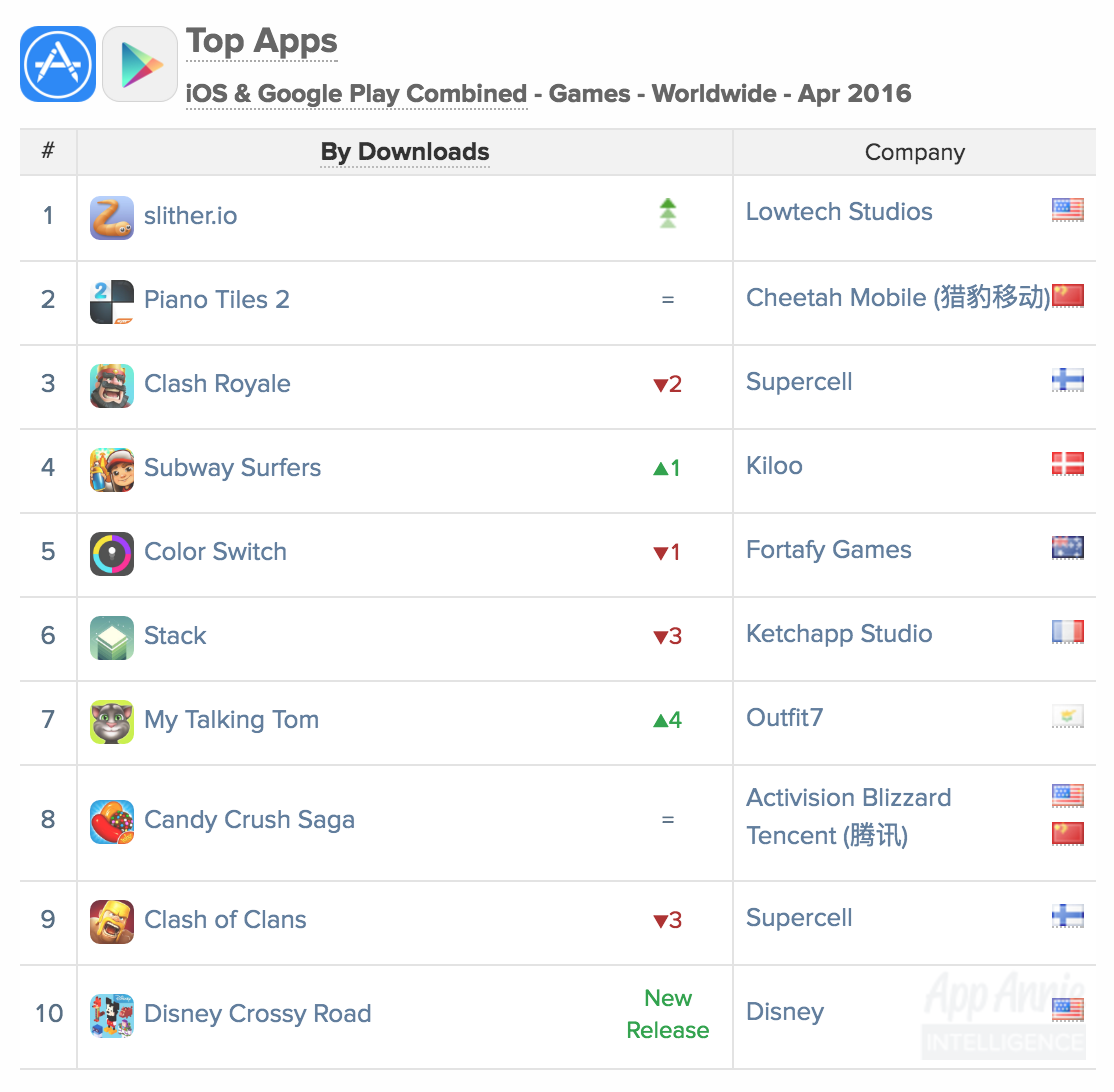 Similar to the smash success Agar.io, slither.io is a free multiplayer game capitalizing on simple, addictive gameplay. It follows in the footsteps of other successful mobile interpretations of tried-and-true games such as Crossy Road and Angry Birds, which both featured similar mechanics to Frogger and online game Crush the Castle, respectively. Slither.io is a modern take on the widely-known Snake Nokia mobile game from the 1990s where the object of the game is to become the longest snake.

This simple and familiar gameplay helped slither.io become a widespread hit across the world in its first month. Much like Agar.io, it takes advantage of the synergy from having a complementary web version of the game. As identified in our Agar.io report, a successful web app can garner support and marketing before or alongside the launch of its mobile app.

While the intuitive gameplay is appealing to all age levels, it does show a clear skew towards the younger demographic. In the US market, 13–24 year olds are nearly 3 times more likely to use the game than the general population on Android Phone.

slither.io rose swiftly up the downloads charts hitting #1 in Brazil, Germany, Mexico, Russia, the US and the UK on April 18 and maintained this rank through April 30.

With such a large download base across many diverse countries, slither.io already has significant market potential for monetization. While the game already supports in-app purchases on its Google Play app, the overall freemium strategy is not yet clear.

Disney Crossy Road experienced global success breaking into the top iOS downloads chart less than a month after its April release. Disney is again leveraging its IP licenses with popular publishers to achieve widespread mobile success. This time, Disney partnered with Hipster Whale, the publisher of the smash hit Crossy Road, to put a Disney spin on its 8-bit arcade-style interpretation of Frogger gameplay.

Disney’s version follows Crossy Road’s divergence from the typical use of in-app purchases which assist a user’s game progression to those that alter the gameplay through new characters. This strategy performed well with Crossy Road, garnering high ratings and earning the publisher $10 million in revenue from 50 million downloads during its first 90 days of release. Coupled with the fanatic appeal of classic Disney characters, there is potential to reap the benefits of this monetization method in Disney Crossy Road. The changing characters and gameplay environments allow for re-branding possibilities from both new Disney releases and past favorites. This strategy is similar to how Subway Surfers maintains high interest with continual changes to its background city, a tactic that helped it to become Google Play’s most downloaded game of all time.

There are few games that find success in both the United States and Japan. Disney’s IP may have provided an opportunity to achieve that. The US and Japan played a large role in Disney Crossy Road’s initial success, driving a majority of iOS downloads. Disney Tsum Tsum has also historically performed well in Japan, remaining in the top 15 grossing games on iOS in Japan since February 2014, reiterating the brand’s strong appeal in the country. While different in gameplay to Disney Crossy Road, Disney Tsum Tsum benefits from both LINE’s stronghold with users and the power of Disney’s IP licensing. An important market for mobile gaming, Japan represents a compelling potential avenue for the success of Disney Crossy Road on both iOS and Google Play.

Disney Tsum Tsum has remained #1 by MAU on iPhone in Japan for 21 months, indicating long-term appeal for both its content and gameplay.

Initial interest in Disney Crossy Road drove high downloads, so their focus now shifts to keeping users coming back each month and securing a sustainable revenue stream. If Disney Tsum Tsum and Crossy Road are any indication, we won’t be surprised if Disney Crossy Road breaks onto other top usage and revenue charts in the coming months.

Angry Birds 2 flew up the worldwide iOS downloads rankings to #7. While this download growth was global in scale, a large portion of this increase was driven by the US. Given The Angry Birds Movie makes its debut in theaters on May 20 in the US, part of this resurgence could be a spillover from promotions for the animated movie as well as it being featured on the iTunes homepage during the month of April. With nearly 10 million YouTube views on one of the official trailers in just over 3 months, this franchise has undoubtedly reached a large audience in the buildup to its movie release.

“With the release of The Angry Birds Movie around the world and a global movie marketing push in virtually every territory, we have been able to capitalise on the unprecedented integration of Angry Birds Action! with the film and many of our partners’ products, from LEGO playsets to McDonald’s Happy Meals. On top of that, with our unique ability to do heavy cross-promotion across our entire portfolio — and with other Angry Birds games also being updated for movie universe and characters — we are driving significant numbers of new downloads while also further heightening awareness of the film. The movie, our games and our product partners are completing a virtuous circle.” –Ville Heijari, CMO Games at Rovio

The Angry Birds franchise is an example of how mobile apps are at the center of our lives. Angry Birds began as a mobile game launched on the iOS App Store in December 2009. Six and a half years later, it has migrated to the silver screen boasting promotional partnerships with some of the world’s top brands including McDonald’s, The Home Depot and Ziploc.

Rovio is bringing its success full circle by leveraging these partnerships to incorporate exclusive movie-related content in its new app: Angry Birds Action!. A new area of the game will unlock during the credits if you open the app to scan an invisible digital watermark or purchase a McDonald’s happy meal.

Rovio has shown how continual innovation and strategic IP licensing can lead to gains both in and out of the app stores.