Google Duo launched on August 15 and is already making a mark in the app stores.

Google made headlines this week with the launch of Google Duo — a one-to-one video-calling app intended to overcome the interoperability issues other popular communication apps face. One of the biggest draws of Duo is that, unlike Apple’s FaceTime, it’s able to transcend operating systems and works on both Android and Apple devices.

First announced in May after Google I/O, Duo was touted alongside intelligent messaging app Allo (which has yet to be rolled out) as dead-simple — and private — solutions for person-to-person interactions.

Google has made a few smart plays in an effort to drive adoption of Duo, especially in emerging markets.

Since launching August 15, the app has already taken off in the app stores, driving well over 700,000 downloads of the app across both platforms since launch. “We’ve seen impressive success for Google Duo, particularly in the United States. Since launch, Google Duo lands in the top 20 for both Google Play and iOS above competitor Whatsapp,” said Fabien-Pierre Nicolas, Vice-President, Marketing & Communications, App Annie.

In fact, as of August 19, it’s already in the top five on Google Play for the US and Canada. Impressively, it’s already #6 for India. 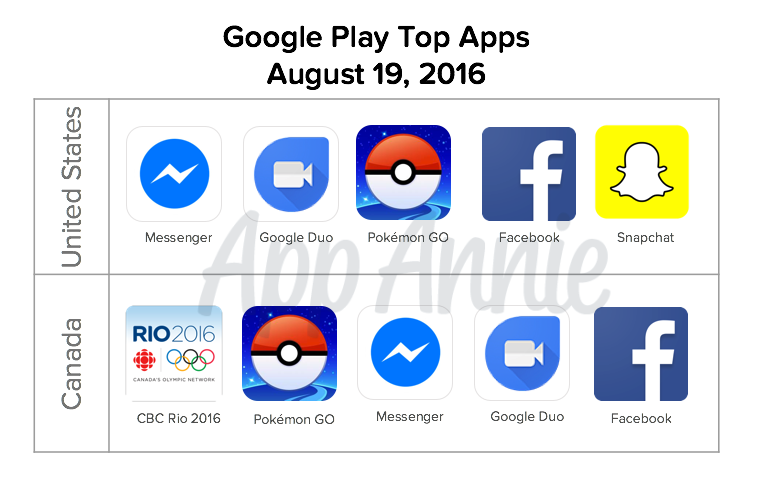 It appears that the app’s early growth is mostly due to media coverage and word-of-mouth marketing. “We haven’t yet seen Google promoting Duo with a major paid marketing campaign. However, they’ve seemed to focus on app store optimization, as they are already #2 in the keyword rankings for the term ‘calling’,” said Nicolas.

The big question: In a market where consumers have so many communication options, will Duo’s promise of simplicity and reliability and its publisher’s pedigree help it carve out a space to grow and thrive?