Pokémon GO: The Very Best, Like No Game Ever Was

In less than two weeks, Pokémon GO has infiltrated all aspects of society. From childbirth to robbery to an astonishing amount of real-world interactions, this gaming app has grabbed a lot of headlines (and daily users) since its official launch in the United States on July 7. Combining beloved ‘90s characters with augmented reality (AR), Pokémon GO’s utilization of innovative technology and nostalgia created a recipe for the top charts.

The Lure of Pokémon

The premise of Pokémon GO aligns with the brand's catchphrase: “Gotta catch ‘em all!” Users are prompted to explore their cities in search of their favorite characters (and Zubats). Overlaying a city’s grid lines on the game’s home screen, the app employs GPS tracking to follow your avatar as it explores set points of interest, or PokéStops, that provide Poké Balls and other items helpful to leveling up in the game. The game also harnesses AR to superimpose Pokémon into the real world, which has been key in prompting sharing of Pokémon-related photos online. Special features like Lures Modules, which are placed on PokéStops and attract additional Pokémon and entice users to make in-app purchases.

The game’s home screen shows a map of your city (left) and utilizes your phone’s camera to have Pokémon characters digitally render in front of you (right).

Publisher Niantic, Inc. pulled from a Google Maps April Fools’ Day joke back in 2014 and some infrastructure already in place. Niantic’s less-mainstream sci-fi hit Ingress contributed this data, as real-world exploration is also core to its gameplay.

The Billion-Dollar Question for Nintendo: Does Pokémon GO Have Staying Power?

So far, Pokémon GO is proving to have lasting pull.

“I can easily envision a run-rate of over $1 billion per year with less server issues, a worldwide presence, and more social and player-vs.-player features.” 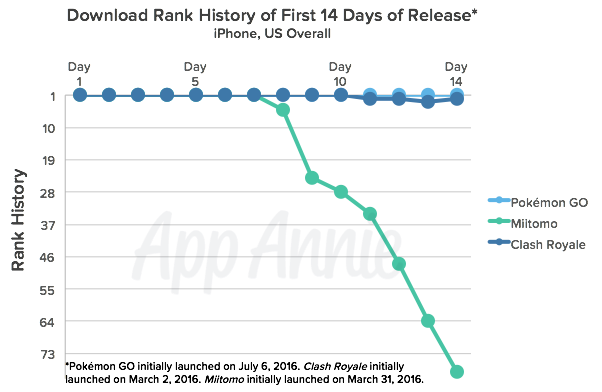 Pokémon GO has yet to leave #1 for iPhone downloads.

Outperforming these mobile chart toppers certainly attests to the popularity and excitement that couldn’t be predicted for Pokémon GO. According to App Annie Intelligence, approximately 1 in 10 Americans with smartphones are playing the game every day with about 1 in 5 in the 13–24 year-old age group with the app installed. Maintaining this #1 spot is telling for how Pokémon GO will hopefully perform in the coming months. 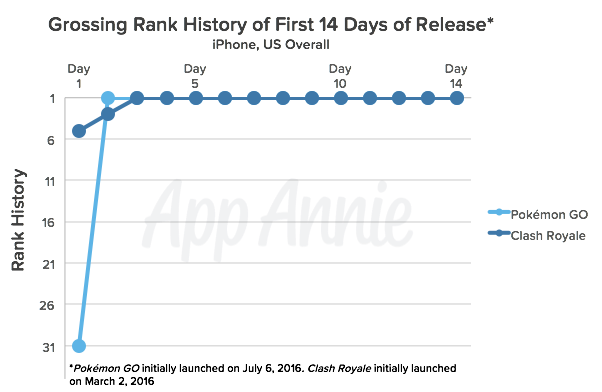 Pokémon GO claimed the #1 spot in grossing rank its second day in the US App Store, a full day before Clash Royale achieved the same feat.

Pokémon GO hit the #1 grossing app for the US faster than the popular Clash Royale from Supercell. This quick leap to the top after starting at #31 is a confirmation of success and shows no signs of dipping as of yet. Beyond this downloading power and astounding user growth, Pokémon GO is keeping the average US user engaged for over an hour a day playing the game. With regular feature updates (and hopefully the addition of in-app social features) these new offerings could keep users engaged and returning in the long run.

The app soft-launched in Australia and New Zealand on July 5, moving to the US soon after. Following suit, Europe was next to get access, with Germany on July 13 and the UK on July 14 and additional European countries soon after. These 20 countries are spending well over $3 million per day, claiming the #1 spot in downloads and grossing for both Google Play Store and iOS App Store. After a last-minute delay, the app launched in Pokémon’s home country of Japan on Friday, beginning the official rollout of a sponsored locations partnership with McDonald's. For now, the app now maintains the top spot in all countries where it’s live with no sign of slowing down. 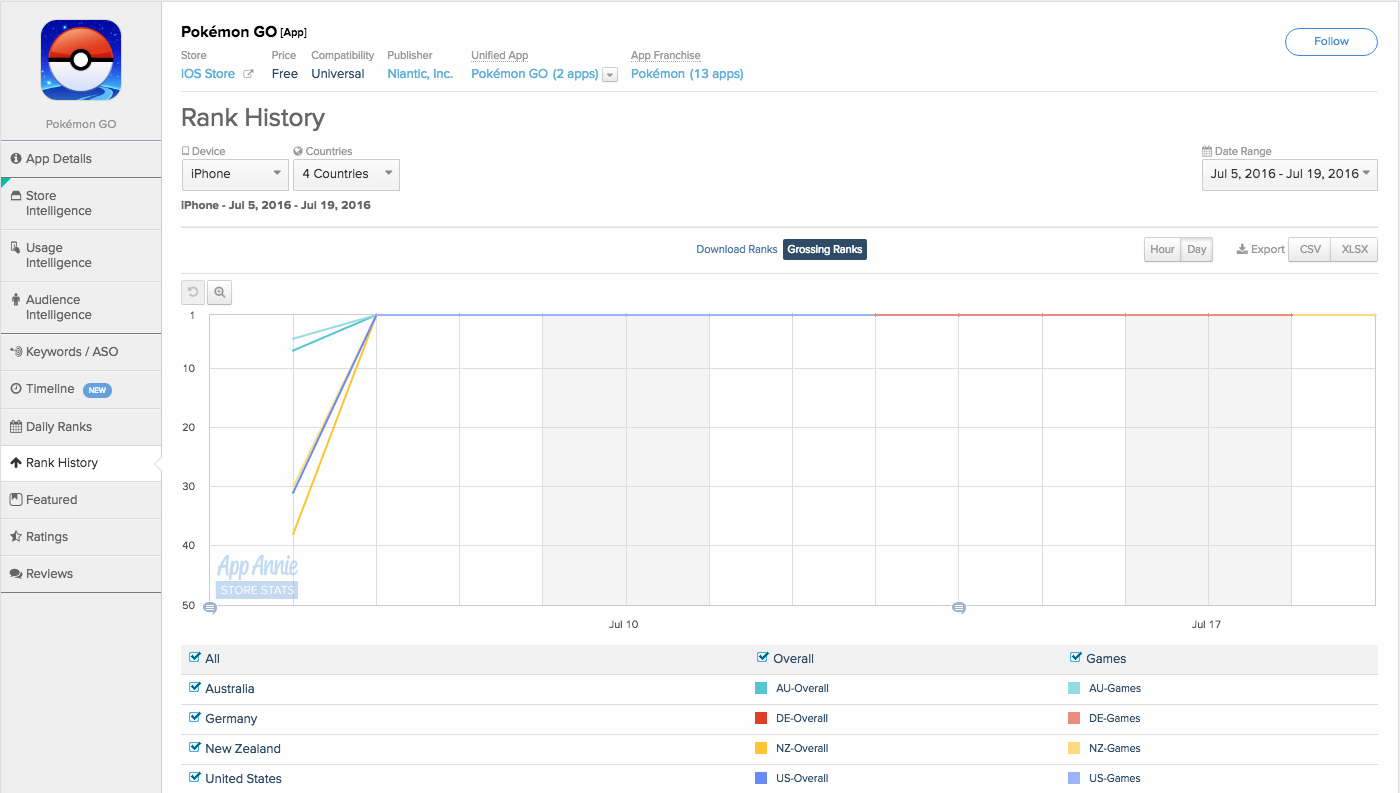 These in-app wins had a ripple effect, with Nintendo's share price has jumped about 70% on and continuing to climb while increasing the company’s market value by nearly double to $42.5 billion. Brick-and-mortar businesses took note when many found they were listed as (or close to) PokéStops. Early adopters took advantage of this luck and began advertising as rest stops for weary Trainers looking to refuel on coffee or pizza — and Poké Balls. A pizza bar in Queens, New York noticed sales bumped by 75% compared to other weekends because of Pokémon GO promotions. These marketing tactics inspired Niantic to offer businesses sponsored location packages to set up long-lasting Lure Modules and hopefully drive more customers. It was smart of Niantic to quickly capitalize on the opportunity to roll out advertising options to eager businesses. We look forward to seeing how else they’ll monetize the app over the next few months.

Not every app can — or will — be the next Pokémon GO. But there are definitely takeaways publishers can apply to their mobile strategy. For instance:

Pokémon GO’s app has proven itself to be an early hit. We’re interested to see what new features Niantic incorporates in future updates to diversify the game and keep users coming back for more.