Weighing the Benefits of Reward-Focused UA

ironSource shares how reward-based user acquisition strategies can pay off, and how best to use this promotional tactic.

Ready to “pay” a new user to try your app? If that sounds like something you’d be willing to try, it may be time to consider a reward-based user acquisition (UA) campaign. This type of promotional campaign can be a great way to quickly — and massively — grow your user base.

At ironSource, we know the ins and outs of user acquisition, and we know that reward-based ads typically command CPIs three times lower than that of a non-rewarded ad. In other words, they can be a very cost-effective UA channel. Here we review the basics, a few challenges to keep in mind, and our tips for effectively deploying this paid acquisition strategy. If you want to learn more, check out App Annie’s UA Playbook.

Rewarded ads are a proven way to stand out in an app store, and right now there is a healthy reward-based advertising market. Certain platforms offer ads that encourage users to take an action with advertiser content — like watch a video or install the app — in exchange for in-game currency. These often appear on an app wall or offer wall advertising, and are perfect for driving a large amount of scale.

These ads encourage large volumes of users to download an app in a short period of time. An added benefit is the bump in app store rankings, which can drive organic downloads from the increased visibility. 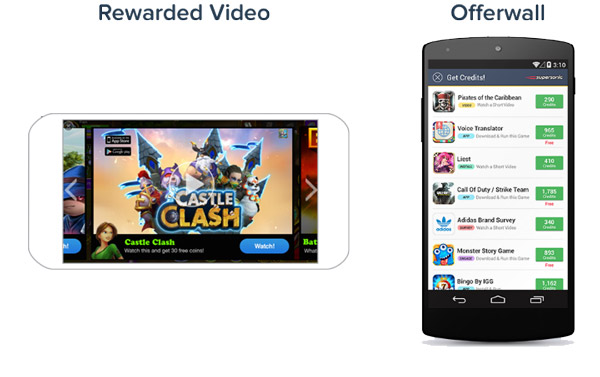 Additionally, rewarded ads are seamlessly integrated with the in-app user experience. They are user initiated and fully opt-in, meaning the user must choose to complete an offer or click on an ad as opposed to being forced to view one. Networks that provide rewarded installs report conversion rates as high as 80% as a result. Not too shabby.

Unsurprisingly, encouraging your users to take action by offering a reward does come with its own set of challenges. Here are a few to pay attention to:

Rewarded installs are an excellent tactic to significantly grow your user base in a short period of time. But it’s important to note that rewarded campaigns should comprise one part of a larger UA strategy.

Non-rewarded installs, which often take the same format of their rewarded-counterpart — just without a reward component — tend to correlate with high-quality users. App video trailers, for example, can make a big impact, appealing to potential users and encouraging them to download without offering a reward in exchange for an install.

As a result of the high quality of users it brings, non-rewarded traffic is considerably more expensive and may need to be run in conjunction with rewarded traffic to reach desirable scale.

To help ensure success, it’s critical that you create a balanced mix between rewarded and non-rewarded traffic as part of your overall UA strategy. Devoting your entire budget to rewarded-only traffic can result in dismal revenue. Conversely, a non-rewarded-only strategy can result in a low volume of users and poor app store visibility.

The Verdict on Rewarded UA

No matter what your ultimate UA goal is — whether it’s to quickly increase your user base or sustain in-app engagement — a rewarded UA campaign could be part of your strategy. Just remember that closely tracking the progress of your campaign, and making adjustments along the way, is an essential part of the process.