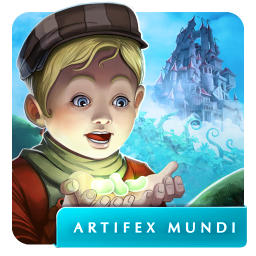 FANTASTIC HIDDEN OBJECT PUZZLE ADVENTURE GAME FROM THE CREATORS OF ENIGMATIS AND GRIM LEGENDS!
Delve into a wonderful fantasy adventure game inspired by the classic Grimm's Fairy Tales! Find your way to the magic land in the clouds and vanquish the last of the giants before he destroys the world!
A long, long time ago the world was the stage of the struggle between the sinister giants and the noble race of peace-keeping guardians.
After a fierce battle the giants were vanquished, except for one, whom the guardians overpowered with powerful magic and banished to a mysterious land above the clouds.

Thousands of years have passed and the world is once again on the brink of extinction. All thanks to a boy who got hold of some magic beans powerful enough to open a path to the cloud world and put humankind in grave danger.
Taking on the role of a fledgling detective from the Brothers Grimm Institute, you’ll embark on a journey through magical worlds to find the castle of the last of the giants, and face him using your wits, magic spells, and the protection of the guardians.
The fate of the world is in your hands. Are you up to the challenge?
+++ WE ARE HERE +++
WWW: http://artifexmundi.com
FACEBOOK: http://facebook.com/artifexmundi
TWITTER: http://twitter.com/ArtifexMundi
FORUM: http://forum.artifexmundi.com
YOUTUBE: http://youtube.com/user/ArtifexMundi
PINTEREST: http://pinterest.com/artifexmundi
INSTAGRAM: http://instagram.com/artifexmundi