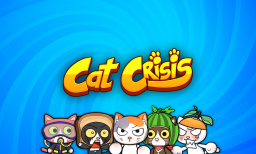 To celebrate the launch of Cat Crisis on the Apple TV, the NorCal Level Pack is FREE to play for a limited time!

You and up to 8 friends must stand together as mankind’s last hope against super intelligent cats that have occupied Earth. Are you ready for the challenge?

PATENT PENDING TECHNOLOGY
Grab an iPhone, iPad, or iPod touch and use it as a Cat Crisis Controller by downloading the FREE Cat Crisis app on The App Store. Up to 8 Controllers can connect to Cat Crisis on Apple TV over Wi-Fi.

PARTY GAME ON THE BIG SCREEN
The cats dare you to find a party game that's more fun for the whole family.

LOCAL MULTIPLAYER - 9 PLAYERS!
To truly experience the world of Cat Crisis, up to 9 players (8 iOS Controllers + 1 Apple TV Siri Remote) can play together at the same time by connecting their devices to the Console at any time during game play. When the enemies have 9 lives, we tried to even the odds a little for mankind!

CAT MEMES
Liberate famous landmarks in this action packed arcade shooter. It won’t be easy as the cats have donned fruit helmets and are armed to the teeth to disband the last human resistance. You thought it was funny uploading pictures of your cat with an orange peel on his head as a helmet? Well, the cats are the ones laughing now!

SHOOT, BOMB, NUKE!
Play solo using the Apple TV Siri Remote. Or use a compatible iPhone or iPod touch as Controller and connect to Cat Crisis on Apple TV and unleash the full potential of your arsenal! Remember, when the going gets tough, launch that WMD at the cats!