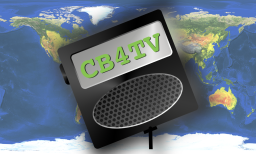 Welcome to CB for TV! This is a companion app to the CB app for iOS (http://appstore.com/cb), although you don't need the iOS version to use it! CB for TV allows you to scan the conversation going on in CB Land when all you want to do is listen in to the fun!

Just as with the iPhone, iPad and iPod touch versions, you can see the approximate location of each broadcaster. However, rather than scrolling a map around the much larger screen of a television, this version marks each location with an icon and places that icon next to the user's tag so that you can see who is who, and the pins shrink and fade over time after a user's last broadcast, so you can see who is active and who is backing out.

And of course, there's a skip option so you don't have to hear messages that aren't interesting to you, and an "ignore" button if there's someone who you don't want to hear for a time--or ever again!

Give it a try! You'll have a blast!