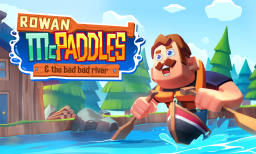 Gear up for a crazy ride! In Rowan McPaddles, you play as bold daredevils trying to outrun Jawsh, an over-sized mega shark.

DANGER IN EVERY CORNER
The angry shark Jawsh is the least of your worries! Keep your eyes open for hippos, crocodiles, and other insane obstacles you have to avoid and hop over while maneuvering across the Bad Bad River.

STRIKE THAT POSE
Survival isn’t enough; it's important that you make it out alive IN STYLE! Perform jaw-dropping stunts, take pictures, and upload them to Rivr — the fictional social media app.

WHO YOU GONNA CALL?
From a man on a kayak with an amazing mustache, to a guy riding a narwhal, the choices are absurd! The roster is filled with wacky characters and spoof cameos so you always have a wide variety to choose from — with even more added every update.

BE NUMBER ONE!
Get the highest score, and show your friends that you are THE VERY BEST. (Like no one ever was).

Features:
• An endless chase across the rapids with randomly generated stages
• Dash and speed across the water through a series of insane obstacles
• Test your skill with the game’s unique and challenging control scheme
• Get the highest score by performing jaw-dropping stunts
• Farm gold coins to unlock characters and skins through the in-game gacha system
• Upgrade your in-game social media page to earn more followers and gold coins
• Fun and accessible for the whole family