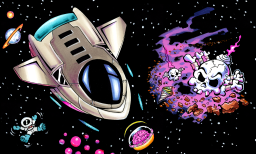 Shuttle Scuttle is a fast-paced, retro-style shooter game with a mission. It's the year 2285 and all is peaceful since the forming of the USSA (United Sol System Alliance). That is until Neptune station reports of unidentified spacecraft approaching. A hostile force is making its way through the Sol system towards Earth. Armed shuttles for asteroid destruction are the only defense crafts available. Seek out and intercept this hostile force before Earth becomes a target!