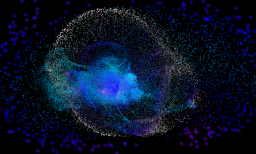 Play for seconds or play for hours; the visual possibilities are limitless.

- Generate up to 16000 particles per second. Feel like you're magically summoning particles from the ether.
- Particles in high-density regions are rendered at higher resolution (smaller point size), to bring out finer detail.
- Extensive optimizations throughout to support a maximum of half a million particles on screen!